A lone anemone, petals open to the sky, catches my eye as I cross the trampled lawn in the park near my home. In other parks and vacant lots, the flowers appear in exuberant flocks, patch after patch of red within the sun’s incarnation in green, the smiles of springtime’s return. This flower stands alone, vulnerable to the feet of ball-playing children and the paws of racing dogs. Tears come to my eyes.

It’s the Shabbat in the middle of the Pesach holiday. Nine years ago, on this Shabbat, my younger son Niot died.

After so many years, it’s not that memories of him have faded. I wouldn’t say that—I refuse to. But their nature has. It’s his smile that I see before me day by day. A lonely smile in the midst of grass trodden by grief, like the anemone.

Niot had many smiles. There were the grins that beamed when he was with family and friends, the smirks he contorted his face into whenever someone snapped a picture (so much so that barely an image of that beaming grin remains). There were the chortles of good cheer and the belly laughs we heard when he romped with his siblings or friends. He also had a sad smile, one that indicated bliss withheld, as in photos that were sent to distant grandparents, or when, among a pack of friends, he nevertheless felt remote.

When I leaf through the albums that so inadequately portray the twenty years of his life, the smiles take me by surprise. Raising four children in a small apartment, while teaching them to be bold in expressing their feelings, Ilana and I often went to bed, much later than we wanted and needed, feeling as if we were living in the midst of the primordial chaos that prevailed before God created order. Niot, the third of four, often seemed to be at the pandemonium’s vortex. I know that that’s how it felt then, but it’s not what I see before me now.

When anemones bloom in concert, bees buzz among them, taking pollen from stamen to pistil. Not long from now, in a week or two, the flowers, sated with love, will close and gestate next spring’s flowers. Crimson buttercups replace them, lacking the white spot the anemone has at its center, followed soon after by poppies, with their black eyes, and the wild tulips, with their inner ring of fire. The bees tend to each in turn. It was by the color of their centers that we taught Niot to tell one from the other, to observe their progression of reds through the first month of spring. So a parent puts order into the chaos of a child’s sensations. 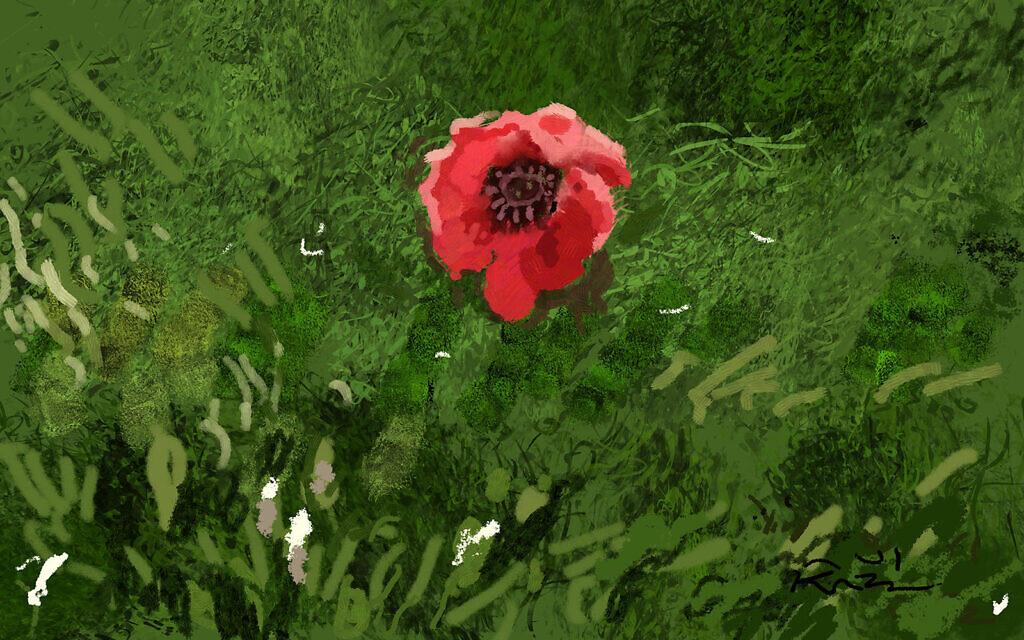 No bees have found this anemone. On its own, far from other flowers, it may never produce seeds. A young couple sits close by, she with her legs crossed and back straight, he with his head propped up by his left arm so that he can look into her eyes. They are oblivious to me, and to the bloom so close by.

Among his friends, Niot was jubilant, his laugh enveloping them all. A friend of his calls as I sit, slowly writing this mediation. He is not one of the inner core of classmates and neighborhood companions who used to fill his room, and who come to visit us on Memorial Day (for he died a soldier). The friend begins to talk with the jauntiness of a young person, asking how I am, how the holiday was, how we are managing with the isolation of the Corona virus. Then his voice cracks. He wants to tell me, he says, how much Niot remains with him, how much his smile and his laughter remain part of his life. We chat, and I thank him for calling.

His friends from the Golani Brigade who came to mourn with us also spoke mostly of his smile. One wrote in the memorial book that, in the most difficult moments of their training, when they had been roused after too little sleep to another grueling day of hikes and runs and exercises and maneuvers, it was Niot’s smile that kept them going. No matter how exhausted he was, no matter how depressing the thoughts and fears of the day ahead, Niot would emerge from his tent, brush off his uniform, and call out to them joyously, as if all that awaited was a day of sweetness and light.

Spring has become a time of sweet sorrow for Ilana and me, like Niot’s sad smile of incompletely met love. It’s the season of flowers and sun and warming winds, but also the season of inconsolable loss. Of liberation from bondage but also subjection to a new burden, of happiness and grief. In this season of resurrection, Niot has not risen again. But here is a red anemone, alone among green blades, a sign of a figure of memory.

The next Shabbat, when we go out for a walk, I depart from the path and tell Ilana about the lone anemone. She says that she also saw it on that same day, and follows me. It takes a few minutes for us to find the splash of red in the midst of the already dulled green of the grass. We stand and stare at it for a long moment, this bright smile alone in a moor of memory. We move on, and the anemone comes with us, untouchable, ephemeral yet unchanging, in the depths of our hearts.

Niot remains alive through The Niot Project, a comprehensive program to assist teenagers with learning difficulties—even when schools are closed because of the pandemic. To make a donation in his memory, click here.