After being lost for decades, the writings of Holocaust victim Renia Spiegel have been finding new admirers. The 18-year old Spiegel was murdered by the Nazis in 1942, but the rediscovery of her poetry-rich diary has some people referring to her as “Poland’s Anne Frank.”

In the coming months, Spiegel’s diary will be published in English for the first time, along with the release a documentary film based on her life. Although the diary was already published in Poland, something of a mystery still hovers over the Jewish teen, whose name does not appear on Holocaust victim lists in Poland or Israel.

Born in 1924, Spiegel grew up on her father’s estate near Poland’s border with Romania. Her younger sister, Ariana, was a child film star known as “Poland’s Shirley Temple.” Their mother lived in Warsaw, where she worked to build Ariana’s career. The sisters, meanwhile, lived with their grandparents in sleepy Przemysl, a border town along the San River.

When she began keeping her diary at the end of 1939, Spiegel explained, “I simply seek a friend.” Her first entry resembles Anne Frank’s initial essays, offering a candid account of her loneliness. Also quite similar to early entries in “The Diary of a Young Girl,” Spiegel includes biting commentary on her classmates.

For example, the class president, Krzyska, “knows nothing, speaks as if she has dumplings with sand in her mouth.” There’s also Ninka, “who arranges meetings in dark streets and visits lonely men and is proud of it.”

Alongside an active social life and her writing, Spiegel dabbled in illustrating. A few months before Nazi Germany’s invasion of Poland, she fell in love with a student named Zygmunt Schwarzer, whose father was a well-known physician. The couple’s romance blossomed during the months ahead, as Przemysl fell under Nazi occupation. 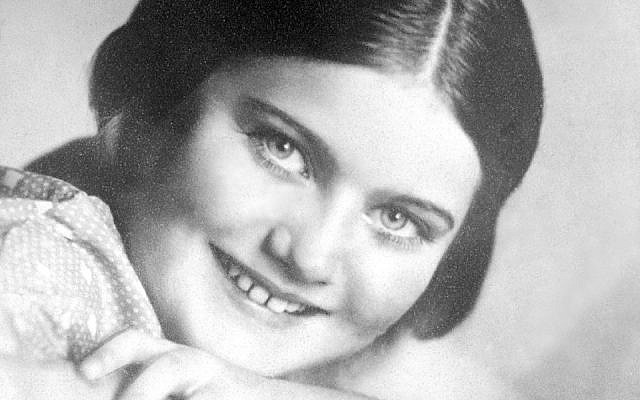 The diarist Renia Spiegel, born in 1924 and murdered by the Nazis in 1942 (Renia Spiegel Foundation)

“Somehow I love  him with my whole body and having him close is like having a personification of spring by me,” wrote Spiegel. “And spring can be infatuating. Is it true that women are dangerous in springtime? Yes, wild females,” wrote Spiegel in May of 1942.

Later that month, Spiegel wrote about understanding “ecstasy” for the first time. She was just shy of her 18th birthday, and her diary conveyed feelings for Schwarzer in both poetry and pose.

“I will grab you, smother, crush you,” wrote Spiegel. “Take you between my hips, no appeal… I will absorb you, I will writhe, I will kiss you like a whore lithe.”

Nearly three years into the war, the Jews of Przemysl lived on edge, not knowing when they might be rounded up and shot. Even before a ghetto was created in 1942, hundreds of Jews were executed on the outskirts of town or in the Jewish cemetery. Torture and degradation on the streets took place daily.

“We fear a pogrom, we fear deportations,” wrote Spiegel in the spring 1942. “Oh God Almighty! Help us! Take care of us, give us your blessing,” she implored. 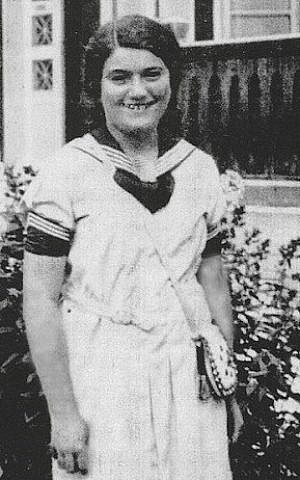 Renia Spiegel, a Holocaust victim who kept a diary during the Nazi occupation of Poland (Renia Spiegel Foundation)

On July 15, the Nazis established a ghetto in Przemysl. Before long, 24,000 Jews from the region were crammed into a small part of town. Only people who held certain jobs or worked for the Nazi-appointed Jewish Council could momentarily breath a sigh of relief, knowing they were temporarily exempt from “resettlement” in the east.

“Remember this day; remember it well, you will tell generations to come about it one day,” wrote Spiegel after the ghetto was fenced off. “Today at 8 o’clock we have been shut away in the ghetto. I live here now; the world is separated from me and I’m separated from the world.”

During the second half of July, the diarist witnessed the start of mass deportations to the Nazi death camp Belzec, where up to 600,000 Jews were murdered in gas chambers. To avoid capture, Spiegel left the ghetto for the Aryan part of town. Along with Schwarzer’s parents, she found herself hiding in the attic of a building tied to Schwarzer’s uncle, a member of the Jewish Council.

A few days later, on July 30, Spiegel was captured along with Schwarzer’s parents. They were shot either in front of the building, or at the Jewish cemetery, with accounts varying. 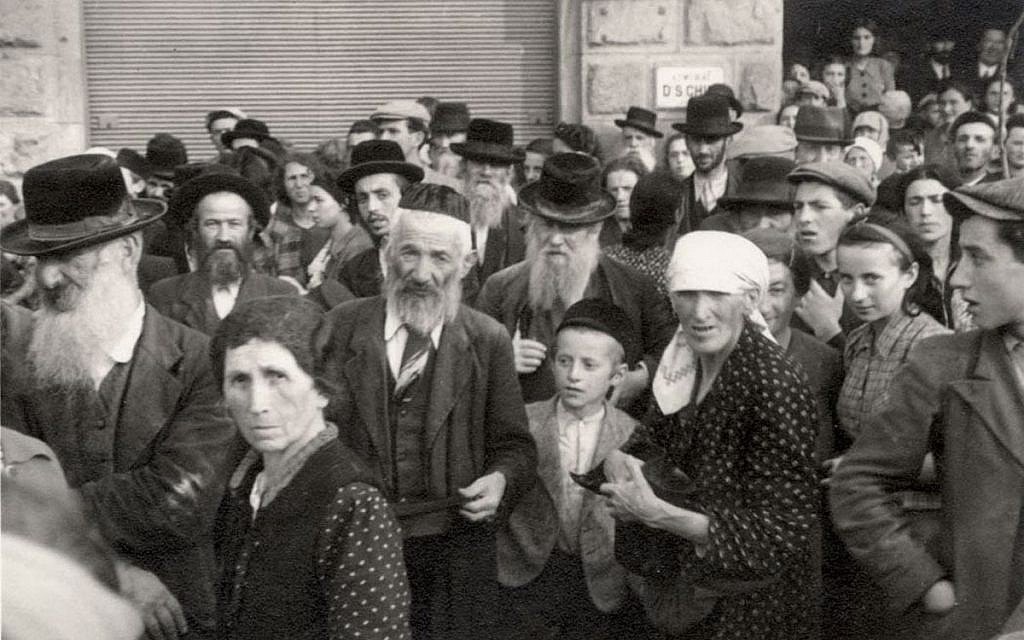 “Three shots! Three lives lost! It happened last night at 10:30pm. Fate has decided to take my dearest ones away from me,” wrote Schwarzer. He did not write these words in his own journal, but in Spiegel’s yellow-paged diary, which had been entrusted to him a few days prior.

“My life is done,” wrote Schwarzer. “All I can hear are shots, shots. . .shots! My dearest Renia, the last chapter of your diary is complete.”

During the Nazis’ July “action” in Przemysl, more than 12,000 Jews were deported to the death camp Belzec. Whereas the graves of Spiegel and other Jews shot on the streets of town are largely unknown, Przemysl has a German cemetery where SS men who helped run operations at Belzec were laid to rest.

For two decades, no one set eyes on Renia Spiegel’s diary. It fell out of Zygmunt Schwarzer’s possession in 1943, and was not returned to him until the 1960s, when a friend from Przemysl brought the diary with him to the United States.

After taking stock of the treasure, Schwarzer gave the stitched-together notebooks to Spiegel’s mother, Roza Maria Leszczynska, who was living in New York City. Spiegel’s younger sister, Ariana Bellak, had survived the war by hiding with a Christian family. When Lesczynska passed away in 1969, Bellak came into possession of her murdered sister’s diary. 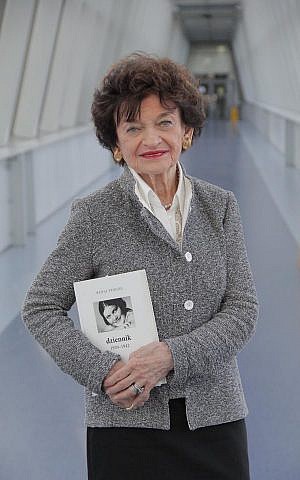 Ariana Bellak poses with the diary of her sister, Renia Spiegel, who was murdered during the Holocaust (Renia Spiegel Foundation)

For decades, Spiegel’s writings remained untouched. Until recent years, Bellak found them too painful to read. In 2014, she met filmmaker Tomasz Magierski at a screening of his documentary film, “Blinky & Me.” Prior to the encounter, Bellak had been urged by her daughter — Alexandra Renata Bellak — to speak with Magierski about Renia and the diary, knowing the producer was interested in Holocaust-era accounts.

“This is the best story never told,” said Magierski after reading the diary in three days. The filmmaker has taken several fact-finding trips to Przemysl, attempting to uncover details about Spiegel’s final days.

Curiously, Magierski has been unable to locate Spiegel’s name on Holocaust victim lists. As a starting point, he checked with the Jewish Historical Institute in Warsaw, and its archive has no record of Spiegel or her grandparents, with whom she lived during the war.

“This is a bit of an ‘Antigone’ story, since we don’t know where she was buried,” Magierski told The Times of Israel, referring to the Sophocles tragedy. “There is no trace of [her boyfriend’s] parents or of Spiegel’s father, as well,” he said. 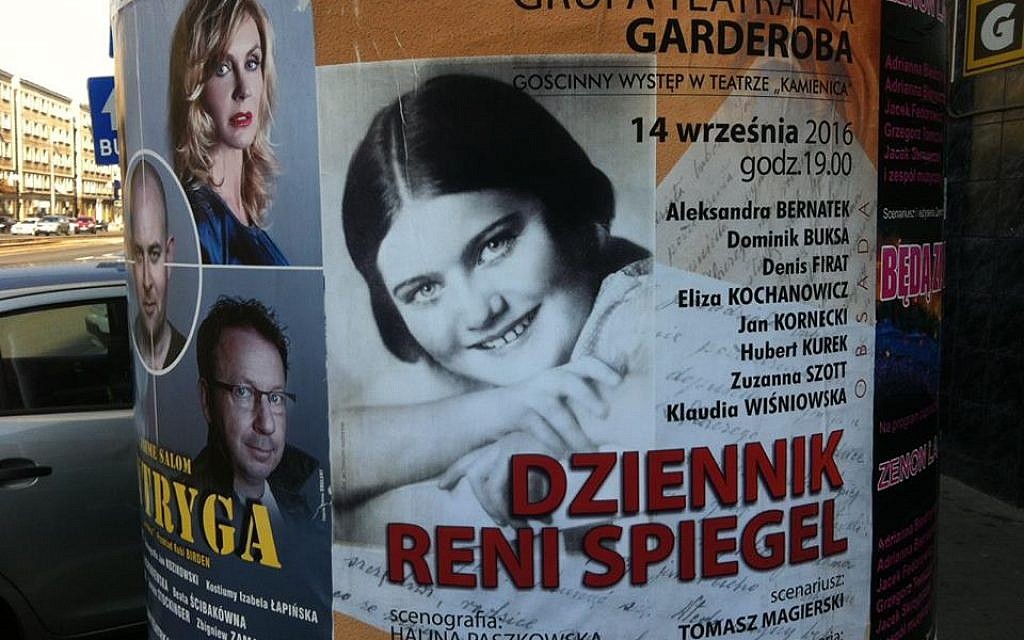 Poster for a Polish play based on the diary of Renia Spiegel, 2016 (Tomasz Magierski)

A search of Yad Vashem’s Central Database of Shoah Victims’ Names did not return a Renia Spiegel from Przemysl. The town’s so-called “Yizkor Book,” published after the war, also does not bear her name, confirmed The Times of Israel.

Undeterred, Magierski plans to wrap filming for the documentary in May. For three years, the Polish-American has been a fixture around town in Przemysl, including when he staged a play there based on Spiegel’s diary in 2016.

Along with the film, Magierski is working to have the diary published in English, he said

“The diary touched my heart and took root in my memory,” wrote Magierski, who helped establish the Renia Spiegel Foundation and an annual poetry contest in her memory. “I have decided to help make the undiscovered story of Renia Spiegel and her sister Ariana more widely known, and also, by doing so, to bring back to life the creative output of the murdered teenager.”

Greetings from the Vaccination Nation

One tiny country has led the world in COVID vaccination. If Israel’s achievement makes you proud, there’s something you should know. Huge audiences have flocked to The Times of Israel recently from countries where Israel normally makes the news only because of its conflicts.

They’ve been coming here to read a very different kind of article. We’ve been the go-to site for everyone intrigued by the success story of the “Vaccination Nation.”

As ToI's Health and Science correspondent, I’ve written much of this coverage - and it’s been exhilarating to see its impact. Our journalism has inspired many articles in media outlets worldwide. I know this because international journalists have often contacted me for input.

Your support, through The Times of Israel Community, helps us to continue providing surprising, impressive stories from this small state to readers around the world. Will you join our Community today?