Over 200 scientists from Israel and around the world are imploring the government to halt plans to turn an aging pipeline into a major means of transporting crude oil from the Persian Gulf to Southern Europe, citing concerns about the risk of an environmental disaster, which could decimate Israel’s renowned coral reefs.

“One ‘small’ malfunction or damage in one of these tankers is enough to cause a major environmental disaster,” write the signatories of a letter sent to Prime Minister Benjamin Netanyahu and the ministries of Finance and Environmental Protection on Monday.

In October, the state-owned Europe-Asia Pipeline Co., formerly the Eilat-Ashkelon Pipeline Co., signed a memorandum of understanding with MED-RED Land Bridge, a joint Israeli-UAE venture, to transfer oil and oil-related products from a Red Sea terminal to the Mediterranean via Israeli territory.

The signatories fear that an oil leak could severely damage Red Sea coral reefs — whose unusual resilience in the face of warming seas could help to save other endangered reefs in future.

Such a disaster, they say, could cripple other marine life, destroy the tourism industries of Israel, Jordan and Egypt, and halt desalination off the Mediterranean coast that supplies much of Israel’s drinking water. 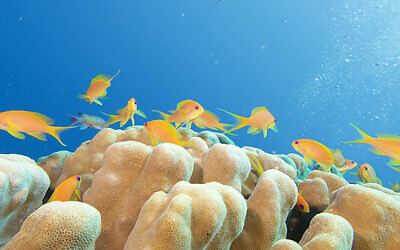 Coral in the Gulf of Aqaba. (Courtesy/Ove Hoegh-Guldberg)

The 231 signatories of the letter, among them biologists, geologists, marine ecologists, geographers, engineers and public health experts, come from academic institutions throughout Israel as well as from the US, Australia, much of Europe, Brazil, the Fiji Islands and Japan.

Signatories include Prof. Charlie Veron from the Australian Institute of Marine Science, Prof. Maoz Fine of the Eilat Inter-University Institute for Marine Sciences, Prof. Amatzia Genin of Hebrew University, and Prof. Andrea Grottoli of Ohio State University, who is president of the International Coral Reef Society.

The letter complements a campaign being waged by some 20 environmental organizations, led by Zalul, Desert and Sea, and Eilat-Eilot Renewable Energy, groups that are also seeking to halt the pipeline deal over fears of environmental damage. 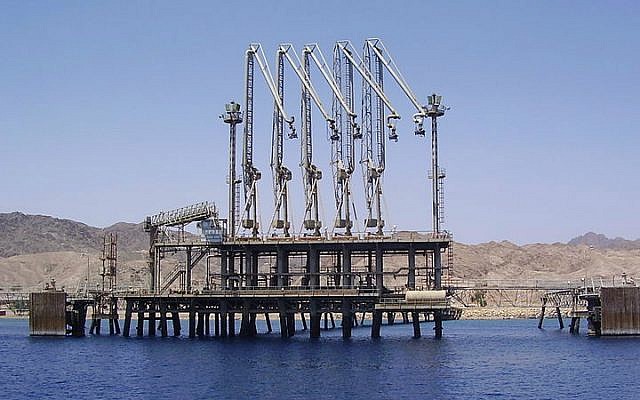 Tel Aviv University professor Yossi Loya, a signatory who in 2000 won the prestigious Darwin Medal for coral reef research, told The Times of Israel that the oil agreement is an “environmental ticking bomb.”

The agreement exposes the entire Gulf of Eilat-Aqaba, the shores of Sinai and its coral reefs, and the Mediterranean coastline to “tremendous danger caused by leakage, malfunction or deliberate sabotage, which in our area are a question of time,” the letter reads. 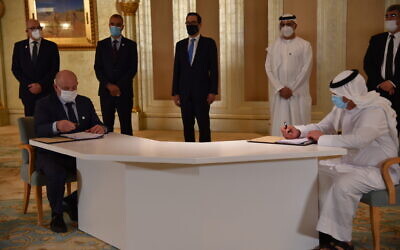 The oil deal MOU was one of the first tangible outcomes of the US-brokered Abraham Accords normalization agreement signed between Israel and the United Arab Emirates.

The pact allows for up to 120 oil tankers containing up to 7.9 billion gallons (30 million cubic meters) of crude oil and oil byproducts to use the existing EAPC port in Eilat, on the shore of the Red Sea in southern Israel.

Oil from the Gulf will be channeled through EAPC pipes across the Arava and Negev deserts in southern Israel to an EAPC terminal in Ashkelon, on Israel’s southern Mediterranean coast. From there, it will be reloaded onto tankers for shipment to markets in Southern Europe.

The agreement also allows for oil to be transported via the same pipeline from the Mediterranean and Black Sea regions to Asia going the other way, according to EAPC.

The deal could bring the EAPC an estimated $700 million-$800 million over eight years, according to Reuters. 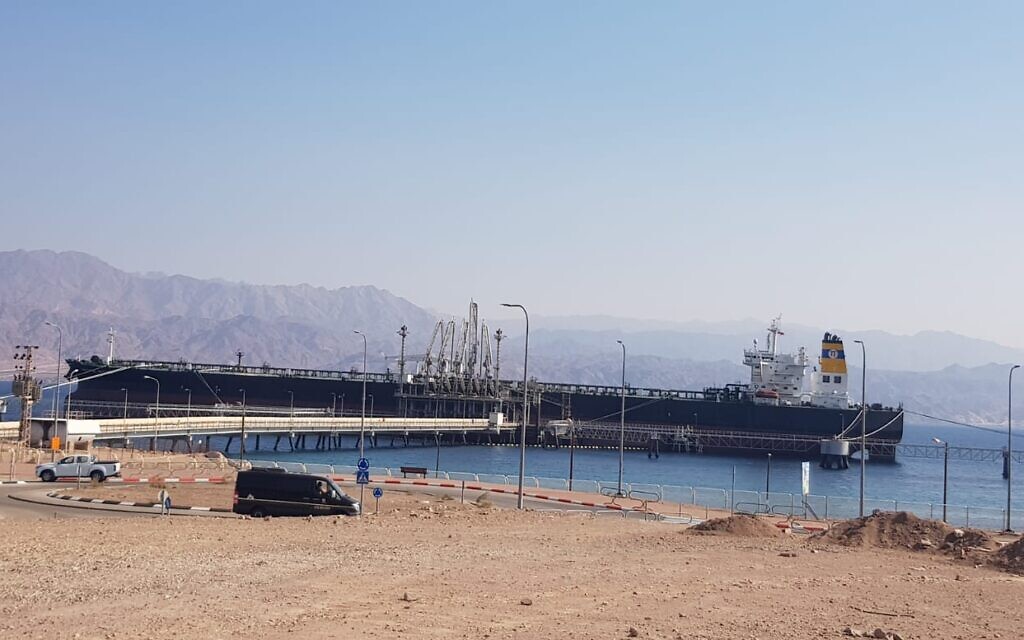 Faithful Warrior, an oil tanker filling up at the EAPC terminal in Eilat, in southern Israel, from January 8 to 9. (Mori Hen, of the not-for-profit Desert and Sea Environment, Eilat)

Most Gulf oil currently passes through the Suez Canal or Egypt’s Sumed pipeline and over recent years, no more than two or three tankers have docked at EAPC Eilat terminal, mostly carrying oil from Russia and Central Asia, en route to the Far East.

During the last month alone, though, three tankers have docked in Eilat, according to Yuval Arbel of the marine environmental organization Zalul. This includes the 150 ton Faithful Warrior, sailing under a Greek flag, which spent Saturday and Sunday loading crude oil.

“There is no precedent in the world for unloading oil so close to nature reserves… tourist sites and bathing beaches,” the letter says, adding that Eilat is located in a major earthquake zone while EAPC’s infrastructure was built before there were earthquake regulations for construction.

EAPC was established in 1968 as a joint Israeli-Iranian venture to carry Asian oil from Eilat to Europe via a network of pipelines that reach from Eilat to Ashkelon and up the length of Israel to Haifa. According to the EAPC website, the company operates 750 kilometers (466 miles) of pipelines in Israel. The firm is operated by the Finance Ministry, though the Transportation Ministry’s Shipping Authority supervises the terminals. 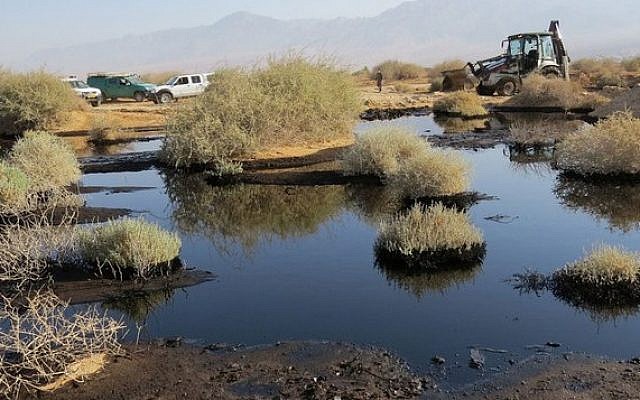 Due to the nature of EAPC as a joint venture with Iran, the company’s operations are extremely secretive and even today, information connected to it can be censored by the Israeli army.

Inspectors monitor its activities from time to time, although lack of transparency makes it hard to know how often or according to what criteria.

Six years ago, the company set the ignominious record of causing the largest environmental disaster in Israel’s history when one of its pipelines ruptured, sending some 1.3 million gallons of crude oil into the Evrona Nature Reserve in southern Israel.

In October, state prosecutors announced that EAPC and five current and former senior executives could be put on trial, pending a hearing, over their alleged role in the disaster, which caused an estimated NIS 100 million ($31 million) in damages.

In February 2020, the EAPC and others were convicted of harming protected nature in the Red Sea after damaging more than 2,600 corals off the southern coastal town of Eilat. 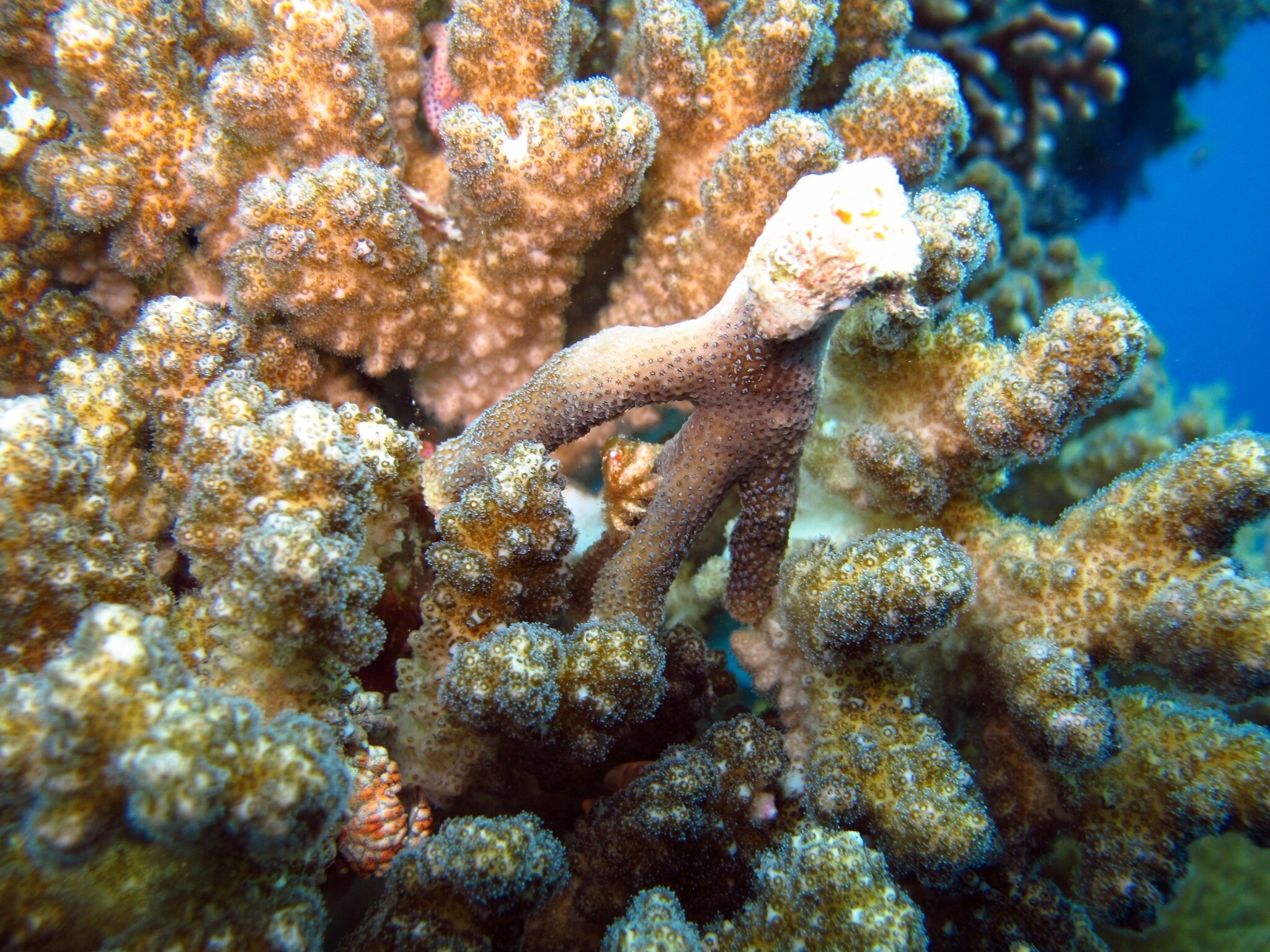 Signatories and other activists fear that a spill at one of the terminals could cause even more widespread damage, including to Eilat’s world-famous coral reef nature reserves, which are located just a few hundred meters from the EAPC port. There are also corals within the port area.

“Coral reefs are considered, in terms of wealth and biodiversity, to be the underwater ‘rainforests’ of the world. The coral reef in Eilat almost became extinct in the 1970s due to the intensive operation of the then-EPA oil tanker terminal and has just about recovered over 40 years,” the letter says.

Thanks to their genetic traits, the Red Sea’s corals are unusually robust despite rising temperatures in the Red Sea, and have not shown the fatal signs of bleaching seen in other reefs worldwide. 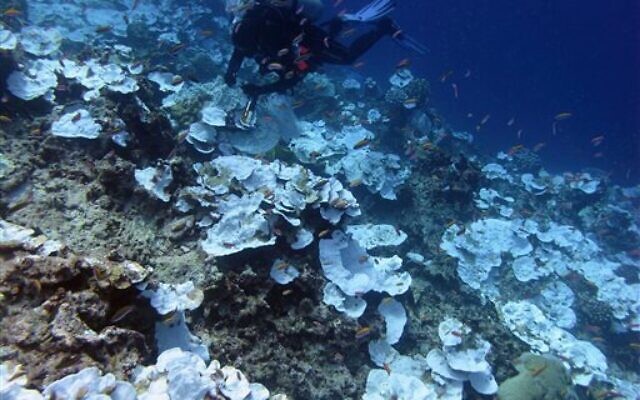 This May 2016 photo provided by the US National Oceanic and Atmospheric Administration shows bleaching and some dead coral around Jarvis Island, which is part of the US Pacific Remote Marine National Monument. (Bernardo Vargas-Angel/NOAA via AP)

“Due to this, the corals of the Gulf of Eilat are a unique and rare natural treasure, whose importance during the climate crisis increases: they can be the source for the restoration of coral reefs all over the world. An oil leak would not only kill the corals in the Gulf of Eilat, but also harm the chances of saving corals from extinction in general.”

An oil spill would compound the dangers that the Gulf of Eilat’s coral reefs are facing from the increasing intensity of climate change-related storms,  the letter says. 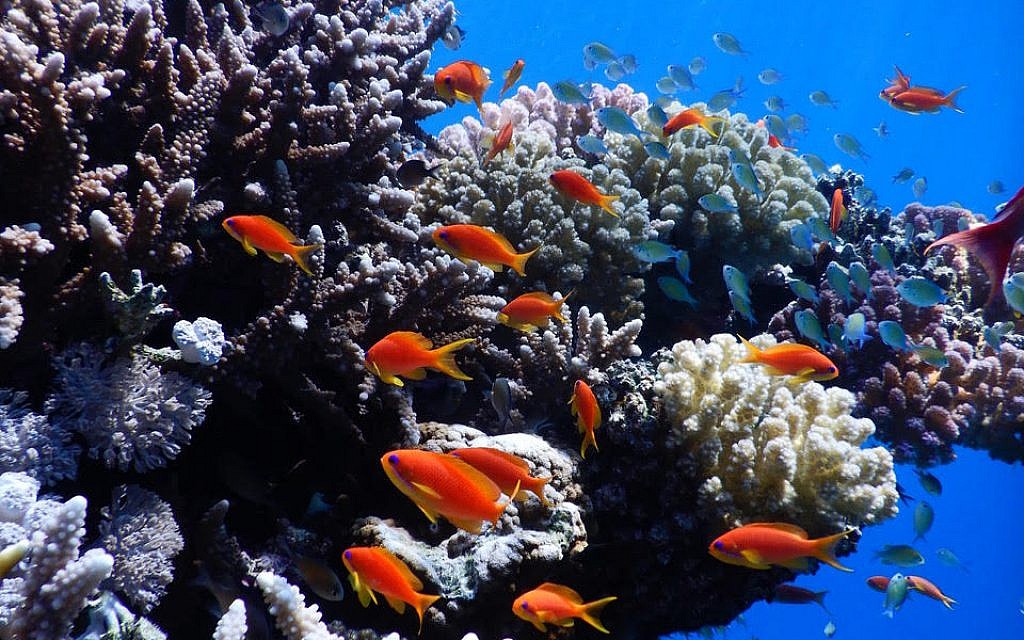 Corals in the Red Sea near Eilat.  (Courtesy Maoz Fine)

The reefs would “not survive another blow of a large oil spill,” the letter warns.

It notes that the pollution would spread quickly due to the strong winds characteristic of the Bay of Eilat. Even a spill of 1% of a tanker’s contents would equal thousands of barrels of oil. 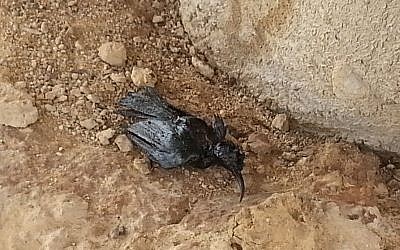 A bird killed by an oil spill in the Arava area of southern Israel on December 10, 2014. (Shahar Ischarov/Environmental Protection Ministry)

Oil spills damage the entire ecosystem, the letter continues, depriving water of light and oxygen, entering the food chain via plankton-eating fish, damaging the reproductive systems and growth of marine sea creatures, suffocating mammals such as dolphins and clogging the birds’ feathers so that they cannot fly.

A malfunction at the Ashkelon terminal would not only wreak havoc along Israel’s Mediterranean coastline but would likely halt the operation of desalination plants, the scientists say.

Last year, during the same month that the MOU was signed, several cubic meters of oil leaked out from the EAPC owned Trans-Israel pipeline, three kilometers off the coast of Ashkelon.

Unlike Ashkelon, the short pier in Eilat brings the tankers much closer to the shoreline. 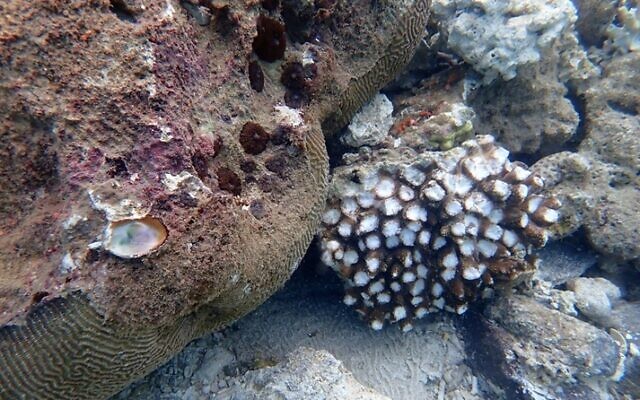 The letter also points to an increase in air pollution likely to result if the Red-Med initiative goes ahead. There are no pollution regulations for ships docking in Israel, despite a 2017 government decision to create them.

Among EAPC-related incidents of environmental damage other than Evrona, some 40 tons of oil leaked from a pipe near Tirat Carmel in the north of the country in 2007.

In 2011, a tractor working on an EAPC project hit one of the company’s pipelines releasing 1.5 million liters of jet fuel into the Nahal Zin river in the south of Israel. Weeks later, another company tractor hit the same pipe, barely half a kilometer away, causing yet another leak.

In 2012, seepage from an EAPC pipe near the Givati Junction close to Ashkelon required the removal of some 2,000 tons of contaminated soil.

A spokesperson for the EAPC responded, “The Europe-Asia Pipeline Co. is the energy gateway of the State of Israel, whose activity has strategic importance for the energy market and its role.

“The EAPC is committed to the values of environmental protection and protecting the region in which it operates and it invests a lot of resources in this.

“It is because of the EAPC that the coral reef in the bay has been preserved and has developed over more than 50 years, parallel to the EAPC’s work, and that is thanks to the strictest safety regulations and the company’s commitment to the environment in which it works.

“The company has the most up to date equipment in the field and meets international standards for environmental protection.

“We are proud and excited about the historic signing of the agreement in the presence of the US secretary of the treasury [Steve Menuchin], in direct continuation of the Abraham Accords.

“The agreement will strengthen the Israeli economy and will ensure energy security for Israel, within the framework of strict and continuous protection of the environment.”