Austrian-born Ginsberg may have grown up on Viennese waltzes, but her current passion is for heavy metal. The reason the almost 97-year-old is taken with the musical genre popularized by bands such as Black Sabbath, Def Leppard and Metallica is simple: “I can’t sing. I can’t carry a tune. So heavy metal works because I just have to say the words,” she said.

Speaking to The Times of Israel in her central Tel Aviv apartment, Ginsberg seemed extremely pleased with the attention her highly unusual gig as front woman for Inge & the TritoneKings has brought her. Four videos of the band’s performances, along with a New York Times op-doc short film about Ginsberg, have racked up hundreds of thousands of views on YouTube. The world is evidently curious about this Jewish grandmother who screams into the microphone in English and German while wearing pearls and an evening gown.

A prolific poet, Ginsberg writes all her own songs. Although she has many of her already existing rhythmic works to fall back on (including some from published collections), she always writes fresh material for every recording session. She focuses on messages she thinks are important, like taking care of the environment and not destroying the Earth, staying true to yourself, and spreading love rather than hate.

“The important thing in heavy metal is the text. Heavy metal is not really poems, it’s messages,” Ginsberg asserted in her Central European-accented English.

Where does her inspiration come from?

“Nothing inspires me. It writes itself. You can’t order poetry, you can’t make it. I always say I just channel it. It comes from the universe down to me and I write it down. That’s all,” she explained.

The nonagenarian’s unlikely foray into heavy metal evolved after meeting some young musicians a few years ago in New York. The multi-generational new band decided to come up with a number with which to compete for a spot in the Eurovision song contest. Since Ginsberg holds Swiss citizenship, she decided to appear on the Swiss reality television show that determines the country’s Eurovision entry. Wearing a long, red evening dress, she performed “Trümmer” (Rubble). She wowed the judges not only with the song, but also her personal story.

Ginsberg was born in 1922 and grew up in Vienna in an affluent, assimilated Jewish family. When asked what her life was like as a girl, she scoffed, “You want me to remember? It was so long ago.” Then she started recounting.

“We grew up very well-to-do. We had employees. We lived in the city, and we also had a weekend villa. I went to a normal high school. We went to the dance school, where were trained to behave like before the [First World] War. We went on a ski week every year with our school,” Ginsberg said. 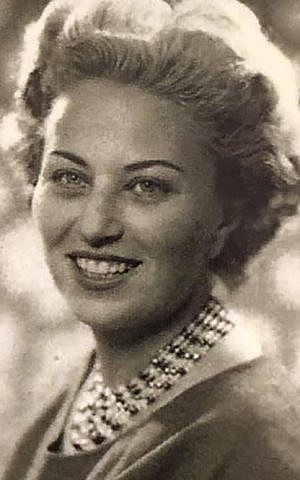 Did she or her parents see the Nazi Anschluss and the Holocaust coming? “Nobody could believe it could happen,” she said.

After the annexation of Austria by the Nazis, her family was separated. Her father made it out of Europe on the St. Louis, the infamous ship that set sail from Hamburg, Germany on May 13, 1939 carrying more than 900 Jews fleeing Nazi persecution. The ship was denied permission to land in Cuba, Canada and the US, and was forced to turn back to Europe. Ginsberg’s father was fortunate to be among the refugees allowed to disembark in the UK.

“We didn’t know that my father was in England because the war started. We didn’t hear from him for seven years,” Ginsberg said.

Ginsberg, her mother, her younger brother, and her fiancé (musical composer Otto Kollman, who would become Ginsberg’s first husband), were stranded in Vienna. Ginsberg said the family avoided deportation because her brother and Kollman were assigned essential work as grave diggers.

In 1942, Ginsberg’s mother was able to turn to a family friend, a count whom Ginsberg said was involved in smuggling. In return for all of Ginsberg’s mother’s jewels, he smuggled the family into Switzerland, where they initially ended up in a refugee camp. As recounted in a German-language memoir by Ginsberg, she was later tapped to manage a villa set up by the American OSS to spy on Nazis and coordinate operations by partisan groups fighting the Germans.

The excitement in Ginsberg’s life did not end there. Several years after the war, she and Kollman moved to the US. They settled in Los Angeles and worked in Hollywood. Ginsberg, who studied piano for many years in her youth, worked with her husband in composing songs for pop stars such as Dean Martin, Doris Day and Nat King Cole, as well as for European singers.

By the late 1950s, Ginsberg tired of Hollywood life, which she characterized in the New York Times film as “all fake.” At a certain point she parted with La-La Land, and also with Kollman, with whom she had her only daughter.

Things continued to be interesting for Ginsberg. She moved to Israel for 10 years and married again. A third marriage was to a man with whom she lived in Quito, Ecuador. And at some time along the way, she also acquired two homes in New York — one in the city and one upstate.

“I’ve been married three times legally [each time to an Austrian-born Jew], and I’ve had a lot of boyfriends. At one time I had four at the same time – one to live, one to laugh, one for fun, and one to cover the whole game with his name. I’m a very moral person, but I have my own moral laws. I never hurt anybody. I don’t think I have done any injustice to anybody,” Ginsberg said.

“You don’t have to be kind. You just have to not harm anybody. If nobody would harm anybody it would be a wonderful world,” she added.

Ginsberg said that what she values most is freedom, especially the ability to determine where she wants to be and when. Although Ginsberg now relies on the help of a personal assistant, she still travels between her homes, spending four months every winter in Tel Aviv, where she is well integrated socially and culturally. (Hebrew is just one of the seven languages she speaks.)

“They say, ‘Freedom is just another word for nothing left to lose,’ but that is not true. Freedom is really there. But you have to be strong. To be free you can’t blame anybody else for your decisions. You have to take your responsibility for it, and that takes both shoulders,” she said.

In addition to writing hundreds of poems in English and German, Ginsberg worked as a journalist, filing weekly articles for the Swiss weekly publication Die Weltwoche for 20 years. Her first dispatch was about the 1964 sensational Kitty Genovese murder case.

“I am a writer. A writer writes. I’ve been a writer all my life. In the meantime, I was a stockbroker [she invested only her own money in the market]. Nobody can live off their writing,” she said.

The key to successful investing? “You have to be one ass ahead,” she said, meaning that you need to be ahead of trends.

As high spirited as Ginsberg is, she understandably remains scarred by her wartime experiences. She asserted that the only reason Jews can live with honor today in the Diaspora is Israel’s existence, as well as its strong army. 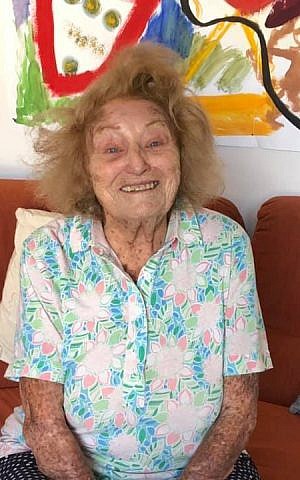 “As long as we didn’t have Israel, we were hunted dogs. Nobody wanted to have us. It’s not our music and culture, it’s the army that protects us,” she said.

According to Ginsberg, the best thing about reaching her age is still being alive with her cognitive faculties intact, especially when so many of her friends have either died or are no longer as sharp as she.

As she approaches 97, she said she has no regrets, and doesn’t concern herself with what others think of her pursuits — heavy metal or otherwise. She neither plans on leaving a legacy nor cares if or how people remember her.

“Frankly, my dear I don’t give a damn. I don’t care. Après moi le deluge,” she maintained.

Ginsberg said she doesn’t have a lot of photo albums or souvenirs. The past doesn’t interest this unique metalhead.

“I believe in today and tomorrow,” she said.

“Here, now and tomorrow,” she said rhythmically. “Hey, that would make for a nice song!”