By Amir Vahdat and Joseph Krauss 27 March 2020, 4:20 pm 3 Edit
Main image by AP's Ebrahim Noroozi, shows people in protective clothing walking past rows of beds at a temporary 2,000-bed hospital for COVID-19 coronavirus patients set up by the Iranian army at the international exhibition center in northern Tehran, Iran, on Thursday, March 26, 2020.

TEHRAN(AP) — Iran announced another 144 deaths from the coronavirus on Friday and said thousands more were in critical condition as the military completed work on a 2,000-bed field hospital in an exhibition center in the capital.

Iran has reported nearly 2,400 deaths among more than 32,000 cases. Iranian officials have repeatedly insisted they have the outbreak under control despite concerns it could overwhelm the country’s health facilities.

In Yemen, meanwhile, the US Agency for International Development began scaling back aid efforts in areas controlled by the Iran-backed Houthi rebels over their resistance to allowing measures that ensure aid goes to those who most need it. Yemen has yet to record any coronavirus cases, but an outbreak in the war-torn country could be catastrophic.

Iran’s military said the new facility, which includes three units and several isolation wards, was set up in just 48 hours. It will be used for patients who are recovering from the COVID-19 illness caused by the virus. 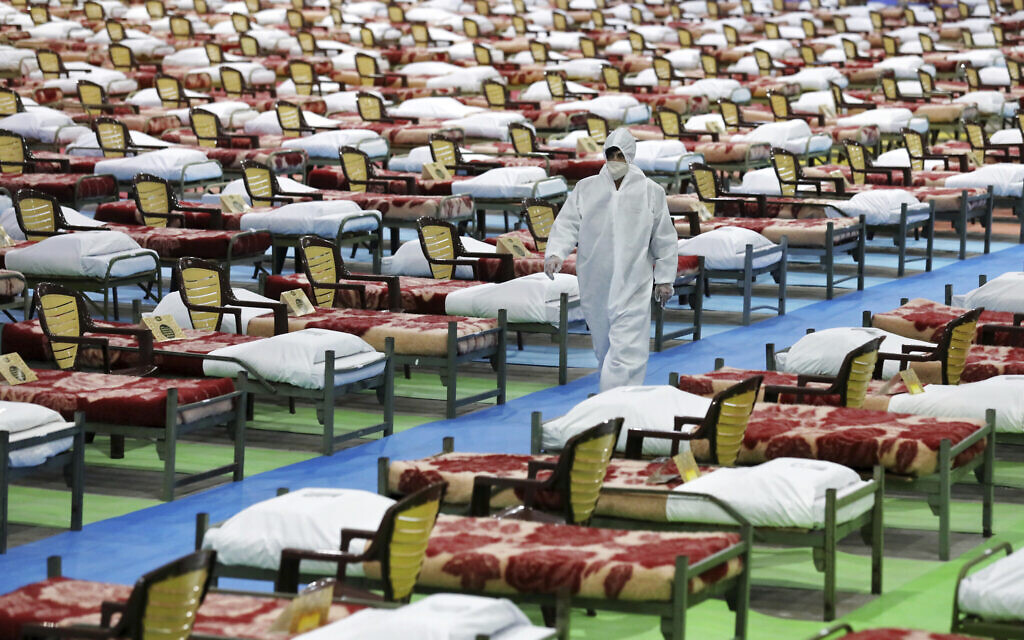 A person in protective clothing walks through a temporary 2,000-bed hospital for COVID-19 coronavirus patients set up by the Iranian army at the international exhibition center in northern Tehran, Iran, on Thursday, March 26, 2020. (AP Photo/Ebrahim Noroozi)

State TV on Thursday quoted Gen. Ali Jahanshahi as saying the hospital has been handed over to medical staff and will begin receiving patients next week.

Most people infected by the virus only experience mild symptoms, such as fever and cough, and recover within a few weeks. But the virus can cause severe illness and death, particularly in older patients or those with underlying health problems. It is highly contagious and can be spread by otherwise healthy people showing no visible symptoms.

The virus has infected more than half a million people worldwide and killed more than 24,000. More than 120,000 people have recovered, according to the Johns Hopkins University Center for Systems Science and Engineering.

Iran is battling the worst outbreak in the region. Health Ministry spokesman Kianoush Jahanpour announced the latest deaths on Friday, bringing the total number of fatalities to 2,378 amid 32,332 confirmed cases.

He said nearly all of the approximately 2,900 newly confirmed cases are in critical condition. More than 11,000 people have been released from hospitals, according to the ministry. 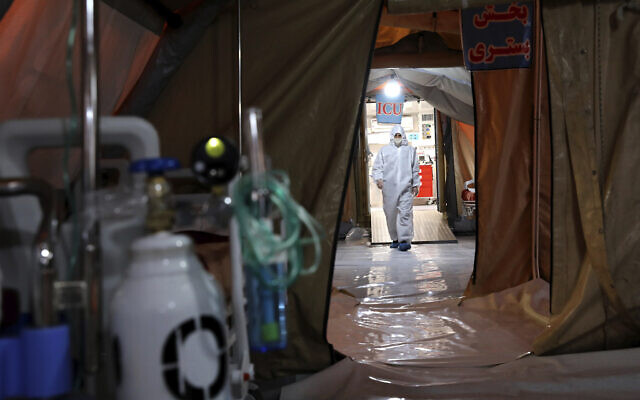 A person in protective clothing walks through a temporary 2,000-bed hospital for COVID-19 coronavirus patients set up by the Iranian army at the international exhibition center in northern Tehran, Iran, on Thursday, March 26, 2020. (AP Photo/Ebrahim Noroozi)

Authorities have urged people to stay home but have not imposed the sweeping lockdowns seen elsewhere in the region.

Iran has been under severe US sanctions since President Donald Trump withdrew his country from Iran’s 2015 nuclear agreement with world powers. The US has offered humanitarian aid to Iran but authorities have refused.

Earlier this week, Iran’s supreme leader, Ayatollah Ali Khamenei, refused American aid and seized on a conspiracy theory that the United States created the virus, something for which there is no scientific evidence. 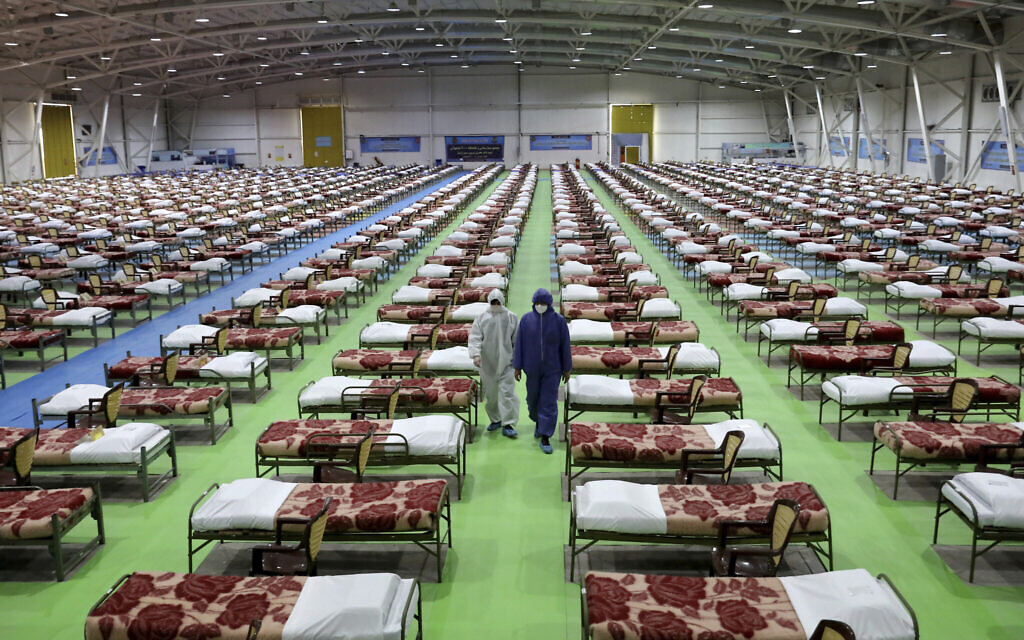 People in protective clothing walk past rows of beds at a temporary 2,000-bed hospital for COVID-19 coronavirus patients set up by the Iranian army at the international exhibition center in northern Tehran, Iran, on Thursday, March 26, 2020. (AP Photo/Ebrahim Noroozi)

Hundreds of Iranians have meanwhile been sickened or died from drinking methanol in the mistaken belief that it offers protection from the virus. Word of fake remedies has spread across social media in Iran, where many are deeply suspicious of the government after it initially downplayed the crisis.

Lebanon, which has reported 391 infections and seven deaths, will impose a nighttime curfew starting Friday. The country of nearly 5 million has been under lockdown for two weeks, with only essential businesses allowed to remain open, a measure that will remain in place for at least another two weeks. 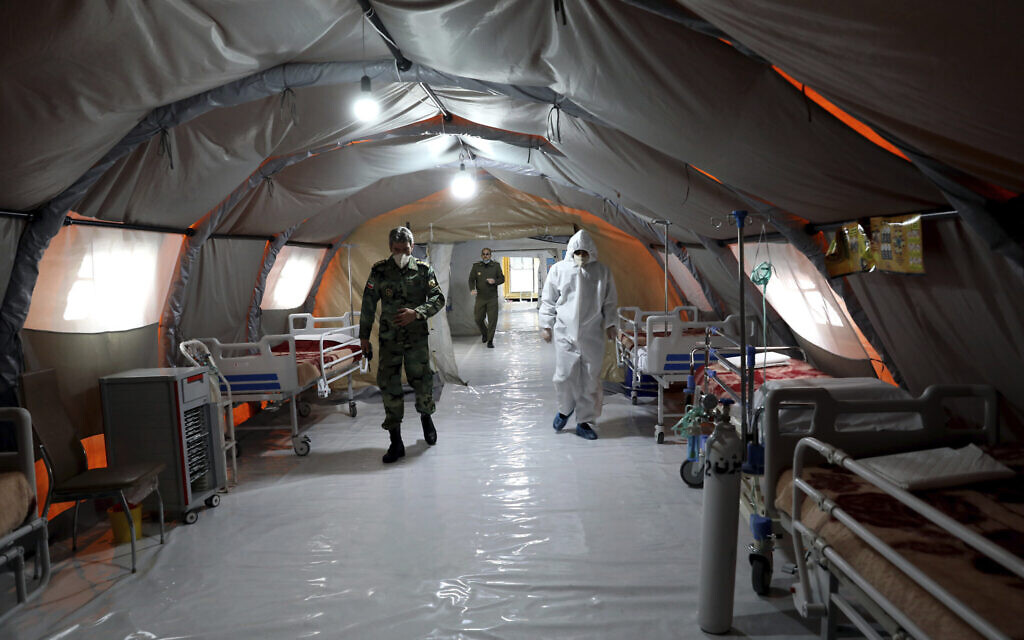 Iranian army soldiers work in a temporary 2,000-bed hospital for COVID-19 coronavirus patients set up by the army at the international exhibition center in northern Tehran, Iran, on Thursday, March 26, 2020. (AP Photo/Ebrahim Noroozi)

Israel, meanwhile, has seen a surge in infections in recent days. It has reported 3,035 cases and 11 fatalities, mainly older patients with pre-existing conditions. The Palestinian Authority has reported 84 cases.

Authorities in the Gaza Strip have reported nine cases.

Gaza’s health care infrastructure has been severely eroded by years of conflict and isolation. A major outbreak in the Hamas-run territory, which is home to more than 2 million Palestinians, could be extremely difficult to contain.

Another major areas of concern is Yemen, where the Houthis have been at war with a Saudi-led coalition for five years. The war has killed more than 100,000 people, displaced millions more and driven the Arab world’s poorest country to the brink of famine.

A USAID spokesperson said it was suspending nearly $73 million in aid “in the face of long-standing Houthi interference in humanitarian operations.” The Houthis control the capital, Sanaa, and much of northern Yemen, areas home to 70% of the country’s population.

The spokesperson said USAID will continue to provide life-saving assistance in areas at risk of famine. It will also support U.N. flights, water and sanitation programs which are essential to preventing the spread of the virus. It will also continue providing aid in southern Yemen.

The spokesperson spoke to The Associated Press on condition of anonymity in keeping with regulations.

The Houthis have long sought to divert aid to their fighters and supporters. Last year, the rebels blocked half of the U.N.’s aid programs and resisted efforts to expand biometric registration and other measures to ensure aid was delivered to civilians.

But Samah Hadid, director of advocacy for Oxfam Yemen, expressed concern that USAID’s pullback could leave the country even more vulnerable to the pandemic.

“With the start of the rainy season, we are projecting that Yemen could face over one million cases of cholera this year,” she said. “Coupled with coronavirus, this would spell a catastrophe for Yemen.”