Joe Biden, the newly elected 46th president of the United States, is a true friend of the Jewish state, friends and even political adversaries of the emerging president-elect agree.

“He has a deep feeling for Israel,” said Michael Oren, who served as Israel’s ambassador to the US when Biden was vice president. Oren opposed almost all of the Middle East policies championed by Biden and his boss, Barack Obama, especially on Iran and the Israeli-Palestinian question. Still, he annually attended Biden’s Rosh Hashanah party, and asserts that the former Delaware senator is genuinely concerned about Israel’s well-being.

“Biden is from a generation that remembers 1967 and 1973,” Oren said, referring to the Six Day War and the Yom Kippur War, respectively. “He has Israel in his heart. He actually gets it. He gets Israel.”

A native of Scranton, Pennsylvania, Biden was raised by Catholic parents who were staunchly supportive of Israel and imbued in him a great respect for the Jewish state.

“You were blessed with one of the greatest generations of founding fathers and mothers of any nation in the history of the world — [David] Ben-Gurion, [Golda] Meir, [Menachem] Begin, [Ariel] Sharon, [Yitzhak] Rabin, [Shimon] Peres. They all fashioned Israel into a vibrant democracy,” he said in 2015.

“And in the process, you built one of the most innovative societies on Earth. In the process, you defended your homeland and became the most powerful military in the entire region. And all these years later, things have changed, but the danger still exists,” he added. “And just to be an Israeli — it still demands uncommon courage.”

Biden has known every Israeli prime minister since Golda Meir, “and more than just casually,” he noted.

He has retold many times the story of his meeting with Meir in the summer of 1973, during his first overseas trip as a young senator: The Israeli premier showed him maps and told him about the militarily precarious situation her country found itself in. Biden looked depressed, but Meir cheered him up, telling him that Israelis have a secret weapon against the Arabs: They have nowhere else to go.

During his decades in politics Biden — who has Jewish grandchildren, as two of his three children married Jews — met countless world leaders. But he still describes his interaction with Golda Meir as “one of the most consequential meetings I’ve ever had in my life.” 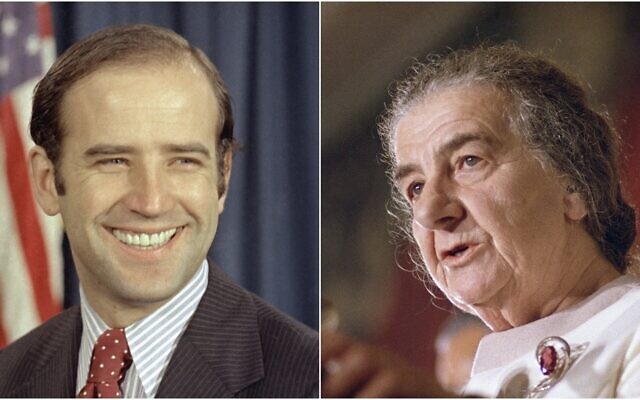 Less known is a meeting with her successor Menachem Begin a few years later, which The New York Times at the time described as a “highly emotional confrontation.”

In June 1982, a few days after the start of the Lebanon War, known as Operation Peace for the Galilee, Begin met with the Senate Foreign Relations Committee in Washington. Several lawmakers grilled him over Israel’s alleged disproportionate use of force.

“A young senator rose and delivered a very impassioned speech — I must say that it’s been a while since I’ve heard such a talented speaker — and he actually supported Operation Peace for the Galilee,” Begin told Israeli reporters after he returned to Jerusalem.

The senator — Biden — said he would go even further than Israel, adding that he’d forcefully fend off anyone who sought to invade his country, even if that meant killing women or children.

“I disassociated myself from these remarks,” Begin said. “I said to him: No, sir; attention must be paid. According to our values, it is forbidden to hurt women and children, even in war… Sometimes there are casualties among the civilian population as well. But it is forbidden to aspire to this. This is a yardstick of human civilization, not to hurt civilians.” 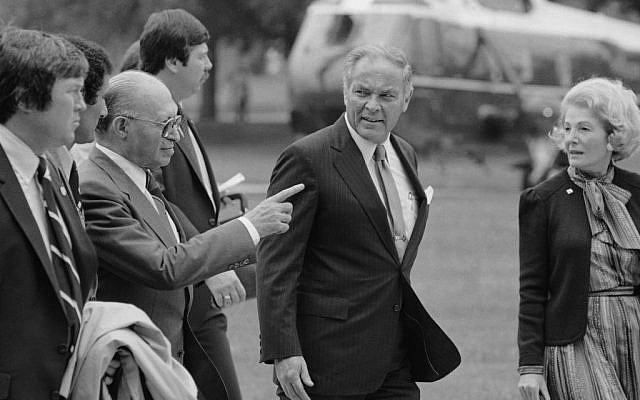 But while Biden had sympathy for Jerusalem’s actions in Lebanon, he let it be known that he opposed Israel’s West Bank settlement enterprise. He warned Begin that Israel “was losing support in this country because of the settlements policy,” according to The Times.

“He hinted — more than hinted — that if we continue with this policy, it is possible that he will propose cutting our financial aid,” Begin recalled. “And to this I gave him a clear answer: Sir, do not threaten us with cutting aid. First of all, you should know that this is not a one-way street. You help us, and we are very grateful for your help; but this is a two-way street: We do a lot for you. And also in recent battles we did a lot for the United States.”

It was “a lively discussion” that he thought was “very helpful,” Begin concluded.

The most admirable thing about you is you’ve never asked us to fight for you. But I promise you, if you were attacked and overwhelmed, we would fight for you, in my view

There are various versions of that meeting. According to one telling, Biden had not only raised his voice but also banged his fist on the table twice. “This desk is designed for writing, not for fists,” Begin was quoted as telling the senator.

And in his rebuttal of Biden’s apparent threat to withhold aid, Begin said, according to some versions: “I am a proud Jew. Three thousand years of culture are behind me, and you will not frighten me with threats.”

No apologies for supporting Israel

Maybe it was Begin’s forceful reaction that caused Biden to forever abandon the idea of threatening to cut assistance to the Jewish state. He has since been one of Washington’s most outspoken advocates for US aid to Israel.

“It’s about time we stop apologizing for our support for Israel. There’s no apology to be made, none,” he said in the Senate in June 1986. “It is the best $3 billion investment we make. If there weren’t an Israel, the United States of America would have to invent an Israel to protect her interests in the region.”

During the 2020 campaign, Biden was one of the few Democratic candidates who said that they would not use American aid to Israel as a means of pressuring Israel for concessions. (Another one was his eventual running mate, California Senator Kamala Harris).

“Israel is absolutely essential — absolutely essential — [for the] security of Jews around the world. And that’s why you have never farmed out your security. You’ve accepted all the help we could give,” he said at an Israeli Independence Day party in 2015. “The most admirable thing about you is you’ve never asked us to fight for you. But I promise you, if you were attacked and overwhelmed, we would fight for you, in my view.” 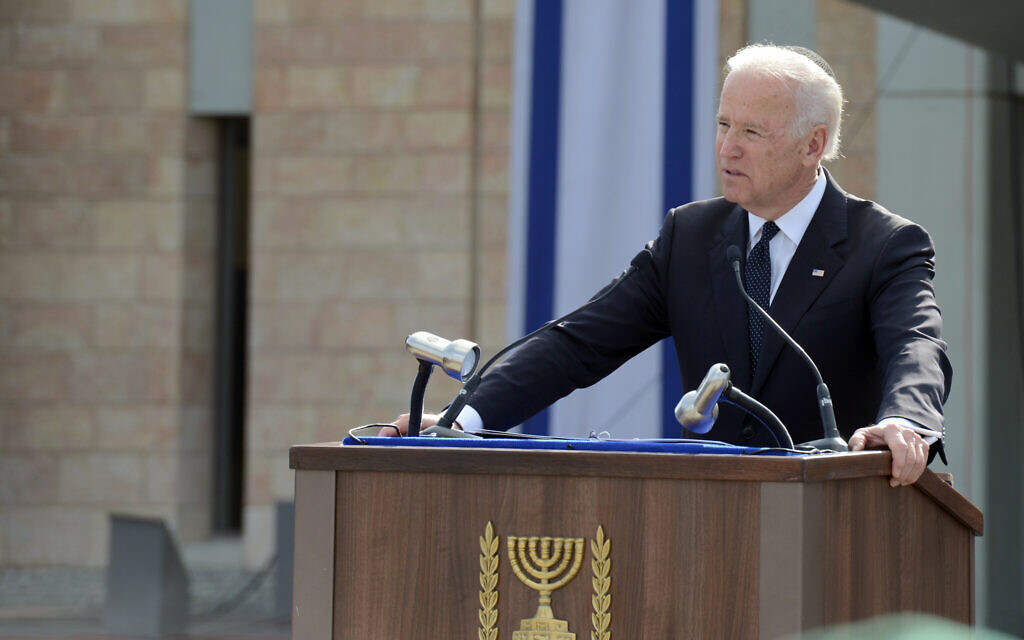 Vice President of the United States Joe Biden delivers a eulogy at a memorial ceremony for former Prime Minister Ariel Sharon at the Knesset in Jerusalem, January 13, 2014 (Haim Tzach/GPO)

But over the years, as his exchange with Begin had shown, Biden’s warm feelings and staunch support for the Jewish state didn’t mean he was not at times bitterly critical of some of its policies, especially on the Palestinian question.

“I firmly believe that the actions that Israel’s government has taken over the past several years — the steady and systematic expansion of settlements, the legalization of outposts, land seizures — are moving Israel in the wrong direction. They are moving us toward a one-state reality, and that reality is dangerous,” he declared in a 2016 address to the dovish pro-Israel lobby J-Street.

Biden’s opposition to the settlements has led him to oppose Prime Minister Benjamin Netanyahu’s intended unilateral annexation of parts of the West Bank. The plan has since been suspended to allow for the normalization agreement with the United Arab Emirates, but Biden made plain that he would not allow it to happen under his watch.

Rather, Biden “will urge Israel’s government and the Palestinian Authority to take steps to keep the prospect of a negotiated two-state outcome alive and avoid actions, such as unilateral annexation of territory and settlement activity, or support for incitement and violence, that undercut prospects for peace between the parties,” according to his campaign website.

He further vowed to reverse the outgoing administration’s “destructive cutoff of diplomatic ties with the Palestinian Authority and cancellation of assistance programs that support Israeli-Palestinian security cooperation, economic development, and humanitarian aid for the Palestinian people in the West Bank and Gaza.” 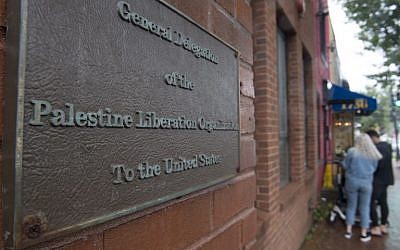 His administration also plans to reopen the US Consulate in East Jerusalem and Palestine Liberation Organization’s mission in Washington, which the Trump administration had closed.

At the same time, he has vowed to push the PA toward ending its policy of paying stipends to individuals imprisoned for acts of terrorism. He also promised to “urge Arab states to move beyond quiet talks and take bolder steps toward normalization with Israel.”

While he was not in favor of moving the US Embassy to Jerusalem, he said he would not relocate it back to Tel Aviv. 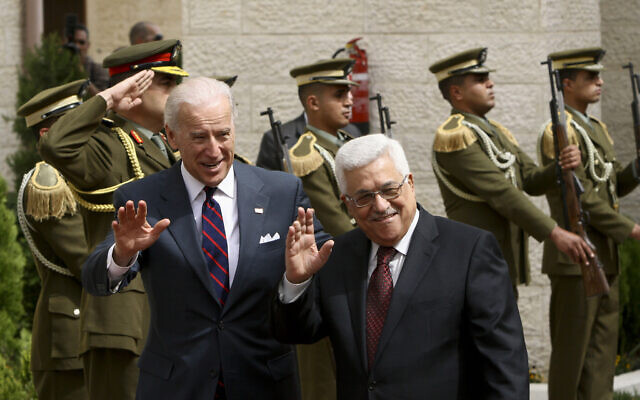 US Vice President Joseph Biden, left, and Palestinian Authority President Mahmoud Abbas wave to the press ahead of their meeting in the West Bank city of Ramallah, March 10, 2010. (AP Photo/Tara Todras-Whitehill)

For Israel, such steps would be a nuisance, but ultimately far less concerning than a move toward renewing Washington’s participation in the Iran nuclear deal, according to Oren, the former ambassador.

“The Palestinian issues are mostly symbolic. But Iran poses a strategic threat,” he said.

Will a President Biden really revive the 2015 nuclear pact he championed at the time? 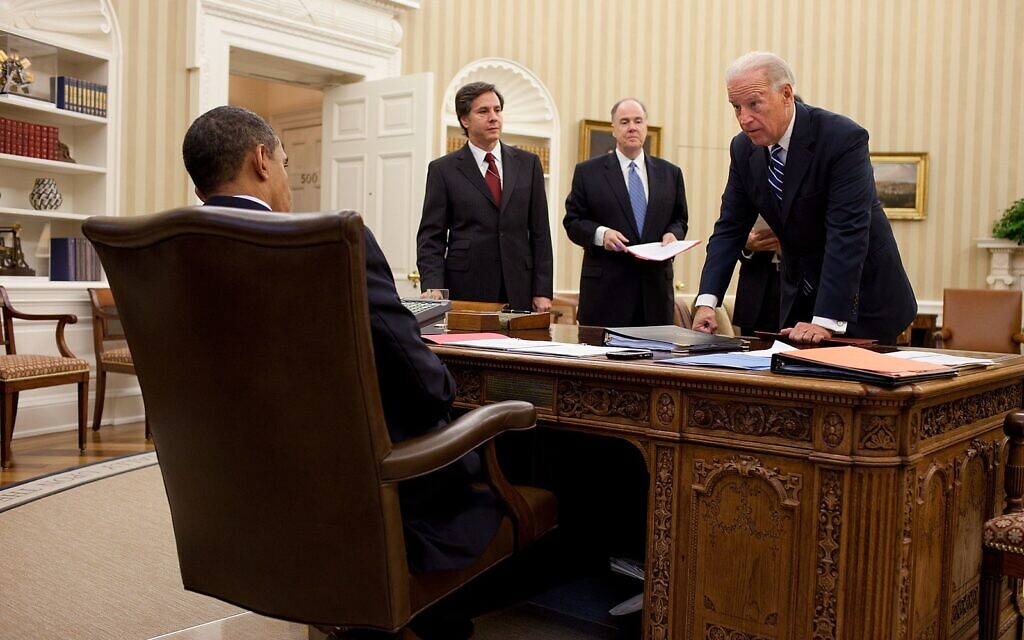 “What the vice president said is that if Iran comes back into compliance with its obligations under the agreement, we would do the same and then work with our allies and partners to build a longer and stronger agreement,” Tony Blinken, Biden’s senior foreign policy adviser, told The Times of Israel last week.

“He’s also been very clear that he would not allow Iran to acquire a nuclear weapon. But we found that the best way to prevent that occurrence is through the [nuclear deal]. And it was working.”

Such a policy may put Washington again on a collision course with Jerusalem. Indeed, a Biden administration rejoining the agreement could lead to war between Israel and Iran because Jerusalem would be “forced to take action,” Settlement Affairs Minister Tzachi Hanegbi said Thursday.

A long history with Netanyahu

However, as opposed to Obama, Biden has a long and intimate personal relationship with Netanyahu.

“We’ve been personal friends for almost three decades,” Netanyahu said in 2010 as he hosted Biden in his Jerusalem office. “And in all that time you’ve been a real friend to me and a real friend to Israel and to the Jewish people.” 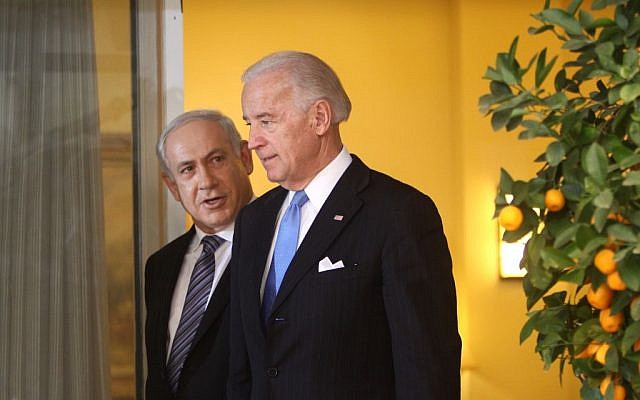 “I hope you feel at home here in Israel because the people of Israel consider the Biden family part of our family. You’re part of our mishpucha,” the prime minister said during a joint press conference, using the Yiddish term for family.

“It’s true that Prime Minister Bibi and I go back a long way,” the vice president replied.

“A long time ago when you were at the Israeli consulate, we met outside in a parking lot outside of a restaurant where I was meeting with some American Jewish leaders,” he recalled. “And we became close friends and I later signed a picture for you that I, as a joke, I said, ‘Bibi, I don’t agree with a damn thing you say, but I love you.’”