Fires that burned 16,000 dunams near Gaza border decimated other plants that usually compete with the seasonal red flower, clearing way for one of the reddest Darom Adoms in years

The incendiary kite launched from Gaza touched down in the Gvaram conservation area on November 2, 2018, launching a fire that raced across the rolling hills and quickly turned everything black. Walking across the blackened landscape of the 12,000 dunam (3,200 acres) of forests that burned in the area around the Gaza border, charred grasses crunched underfoot and the smell of smoke lingered in the air. Fires sparked by flaming balloons and kites launched from Gaza also burned 4,000 dunam (988 acres) of farmland.

Just three months later, the charred black that encompassed most of the Gvaram conservation area has been erased by an explosion of green and red. Winter grasses blanket the burned ground and the traditional red anemones, or kalaniyot, have burst forth across the fields and forests with a vigor not seen in the past decade.

“It’s not actually that there are more kalaniyot this year, even though it feels like it,” explained Kobi Sufer, the regional director of the southern coastal area for the Nature and Parks Authority, as the kalaniyot dotted the field behind him. “In past years, all of the undergrowth was so high that you couldn’t always see them.”

But after incendiary kites from Gaza burned some 16,000 dunams (4,000 acres) over six months, the kalaniyot bloomed this year without competition from other plants, creating a veritable carpet of red flowers, dancing in the wind.

The contrast between the blackened fields of the summer and fall and the lush green and red is difficult to comprehend, even for the people who live here. “Someone comes here today looks around and says, no way this place burned,” said Sufer. In some places, the red flowers grow so thickly, it feels like the poppy field from the Wizard of Oz when Dorothy falls asleep.

The annual Darom Adom (Scarlet South) Festival kicked off on January 31, with five weekends of events during February and March featuring one of the most dramatic blossoming of kalaniyot in the past decade.

The festival, which attracted more than 60,000 visitors for the opening weekend, celebrates the kalaniyot that bloom every year in February, providing a riot of red under blue skies. The festival features dozens of free workshops, tours, concerts and children’s activities at a variety of spots across the Gaza periphery.

Organizers said they expect some 350,000 flower lovers to descend on the south over February, similar to previous years. 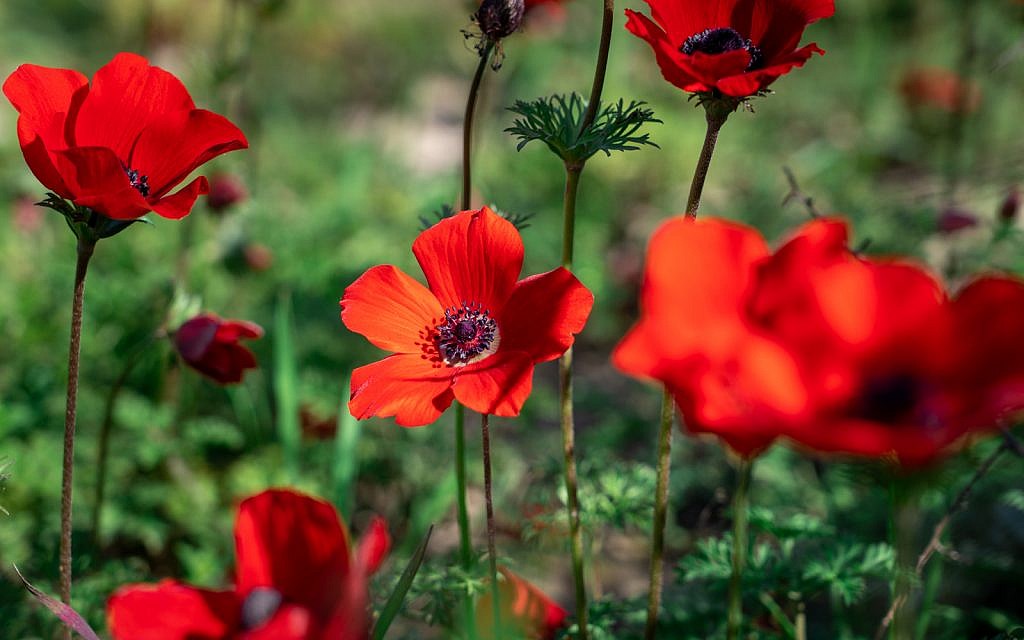 This year, free concerts include performances by Tipex, Rita, the High Windows, and Hadag Nachash, among others. A full list of activities is available on the festival’s website [Hebrew only].

Rainy weather expected this weekend prompted the festival organizers to add an additional weekend of events from February 28 to March 2.

This year, the colors bursting from the ground have taken on an additional significance, just a handful of months after the land was charred and burned. 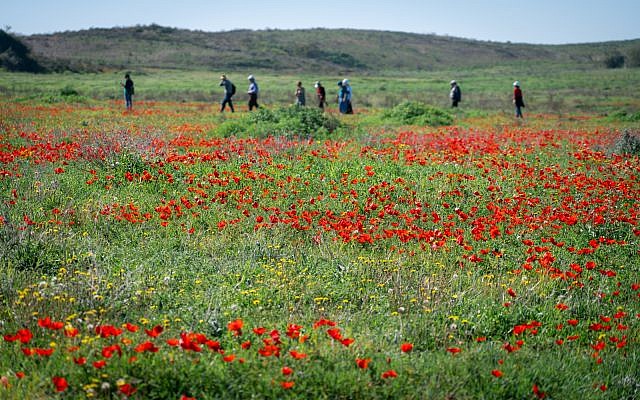 In most places, unless visitors are specifically searching for singed branches, they could overlook the fires’ existence completely. The only indication of the vast damage sustained in the area is where trees or low bushes burned, creating higher-intensity fires with black stains on the ground that have not yet been erased by winter growth. In some places, kalaniyot peek out between scorched branches. 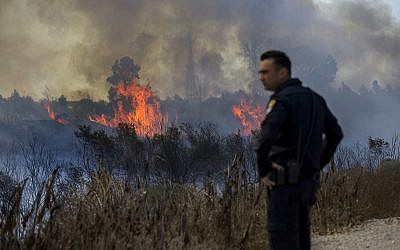 But Sufer said that, just as visitors might be hard pressed to find evidence of the fires, much of the damage is not immediately apparent. The fires damaged the delicate food chain in the Gaza periphery area in ways that will take years to understand, he said. The fires killed millions of snails, and burned through much of the seeds pods that serve as important food sources during the dry summer months. The snails and seeds provide food for field mice and songbirds, which in turn provide food for larger birds of prey.

“The food chain here is very fragile,” said Sufer. “If one or two things are damaged, it affects many things.” The Nature and Parks Authority is currently carrying out surveys to understand the loss of animal life and other long-term effects of the fire. 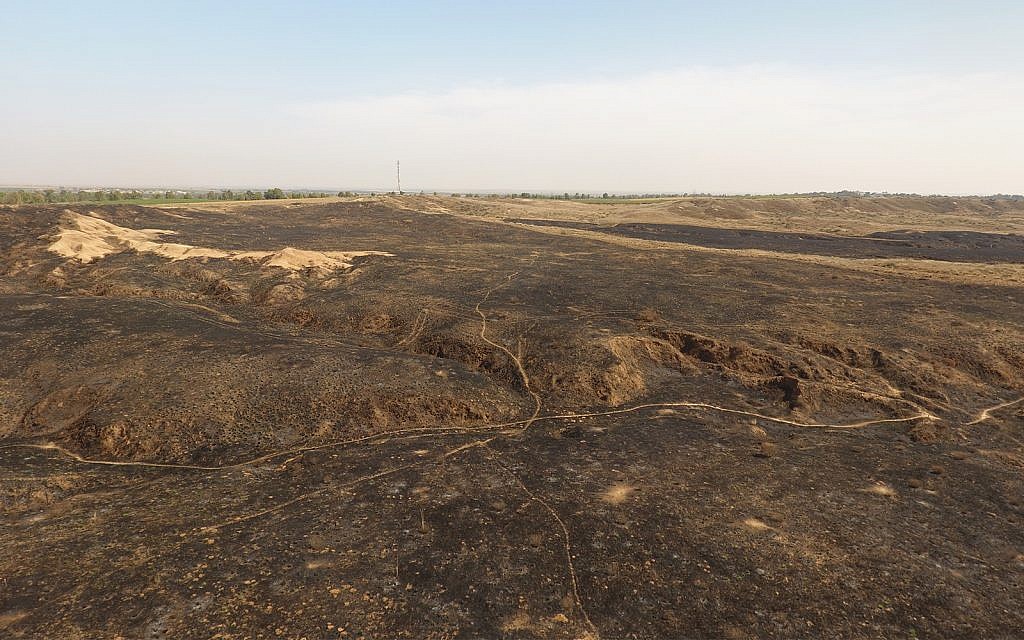 “We lost entire populations of turtles, snakes, and lizards,” Sufer said. Although fires naturally occur in the area, it usually only happens once every few years, giving the land some time to recover. Also, in the case of naturally-occurring fires, the fires are small and contained, and move slowly enough so that animals have time to run and hide in another part of the forest. But with the incendiary kites from Gaza, authorities often had to respond to simultaneous fires, sometimes as many as eight per day.

“We had fires from horizon to horizon in the Gaza periphery,” said Sufer.

The Jewish National Fund-Keren Keyemet L’Yisrael is also currently carrying out a number of surveys in the area, to understand the tree damage and understand how to help the land rehabilitate without inflicting additional damage. 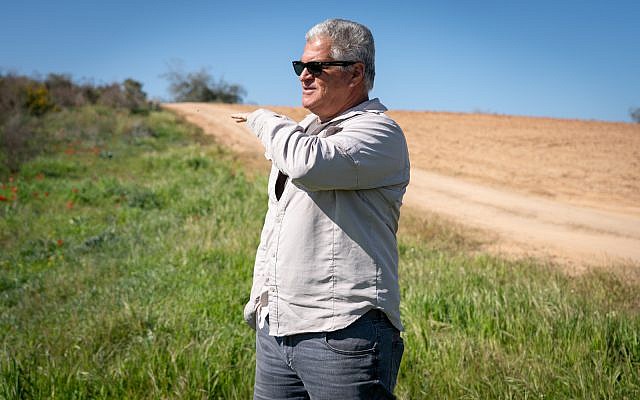 Kobi Sufer, the regional director of the southern coastal area for the Nature and Parks Authority, February 4, 2019. (Luke Tress/Times of Israel)

JNF-KKL estimates that thousands of trees, some of which were more than 60 years old, planted by the first settlers in the area, succumbed to the summer’s fires.

For the first months immediately after a fire, JNF-KKL makes sure to avoid the area completely, explained Talila Livshutz, the community coordinator for the southern district of JNF-KKL. Immediately after a fire, the soil in a burned area is at its most delicate. After the first rains, authorities can begin to go into the forests to understand what was burned and start removing some of the dead trees and undergrowth, to avoid extra fodder for fires that could come in the summer.

The forests in this area are not naturally occurring. Historically, the area around Gaza was known as “Israel’s Badlands.” The soil, made up of silt carried by the wind from the Sahara, was considered too poor for agriculture, which is why Palestinians sold the land to Jews starting in the 1920s and 30s, said Livshutz. The silt-heavy soil seals the ground and does not allow rain to soak in, creating flash floods that further erode the topsoil. 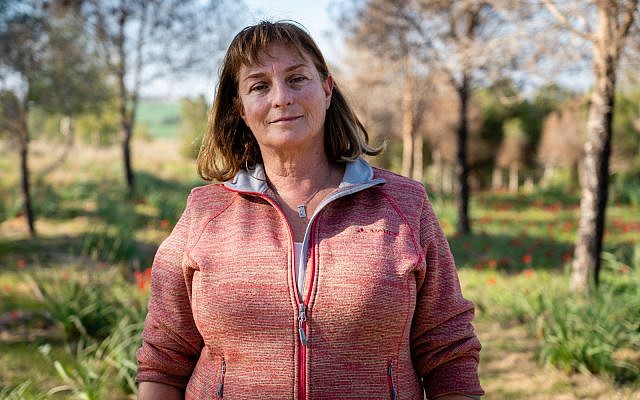 When the first Israeli pioneers arrived to build the Eshkol settlements, they planted forests of pine trees and eucalyptus, to create a green buffer around their towns for security, and for enjoyment, to remind themselves of the European forests they had left behind.

Planting trees along streams cut down on erosion from flash floods, which allowed more quality soil to accumulate. Today, the area is one of Israel’s major agricultural basins, the result of drip irrigation and a number of innovative approaches to agriculture.

The area is also home to millions of winter wildflowers, especially the red kalaniyot, which carpet open pastures and wooded areas. Grazing animals, including cattle and sheep, do not eat kalaniyot, as the flowers and bulbs are mildly poisonous. But they do eat the other undergrowth, removing the competition for kalaniyot. The more an area has been grazed, the more kalaniyot pop up in the area. 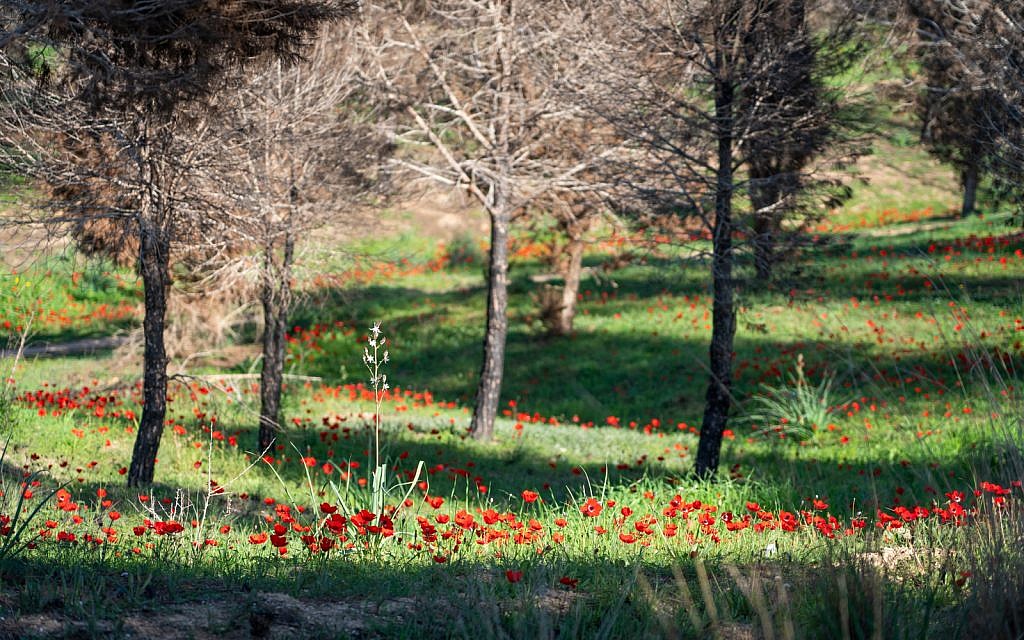 Between 15,000 to 20,000 sheep graze in open areas conservation land, and parks, said Livshutz, as part of the organization’s environmentally friendly fire fighting strategy. As sheep eat dead growth, there is less flammable material to contribute to wild fires. JNF-KKL first started bringing in sheep to graze in parks and conservation areas in the early 2000s, and realized soon after that the flowers could be a good marketing tool to attract people to an area of Israel that is often overlooked for hikes and tourism.

While the kalaniyot are always a colorful site, this year, the contrast of the changes in the land over just a few months is breathtaking.

One of the best ways to see the kalaniyot is by bicycle, which helps visitors avoid the high traffic areas where it can be difficult to enjoy the flowers while tripping over people taking selfies. The 217 Bike Store on Kibbutz Carmiya will outfit you with a mountain bike and helmet for four hours for NIS 50 ($13-14) (reservations recommended on the weekends). The store’s location provides access to 45 km (28 miles) of paved or gravel trails and 20 km (about 12.5 miles) of single track trails in the Gvaram reserve, and it is also north of Gaza, which means you’ll avoid the worst kalaniyot traffic. 217 Bike Store owner Patricio Tanner has helpfully placed red flags at points along the trails that have higher concentrations of kalaniyot, so riders don’t miss a single flower. 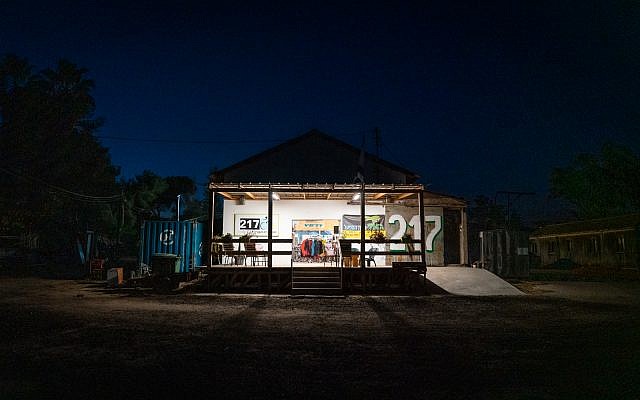 La Medavesh bike store on Kibbutz Be’eri also offers bike rentals and dozens of kilometers of trails through forests and areas that were completely burned this summer and offer a high concentration of kalaniyot.

“We’ve gotten less rain this year, about half of the normal amount,” said Tanner. “So you’d expect things to be less green. But because the fires cleared out all the old, dead weeds, you can see all of the colors so much stronger.”

“Everything here was black,” said Sufer, sweeping his arm across gently rolling hills in Gvaram. “We’re really happy to see it bloom. But there’s a shadow of concern and expectation of what will happen this summer. We hope that we won’t return to the same situation, with fires on top of fires.”

“If next year, there are more fires, we will lose unspeakable things,” Sufer added. 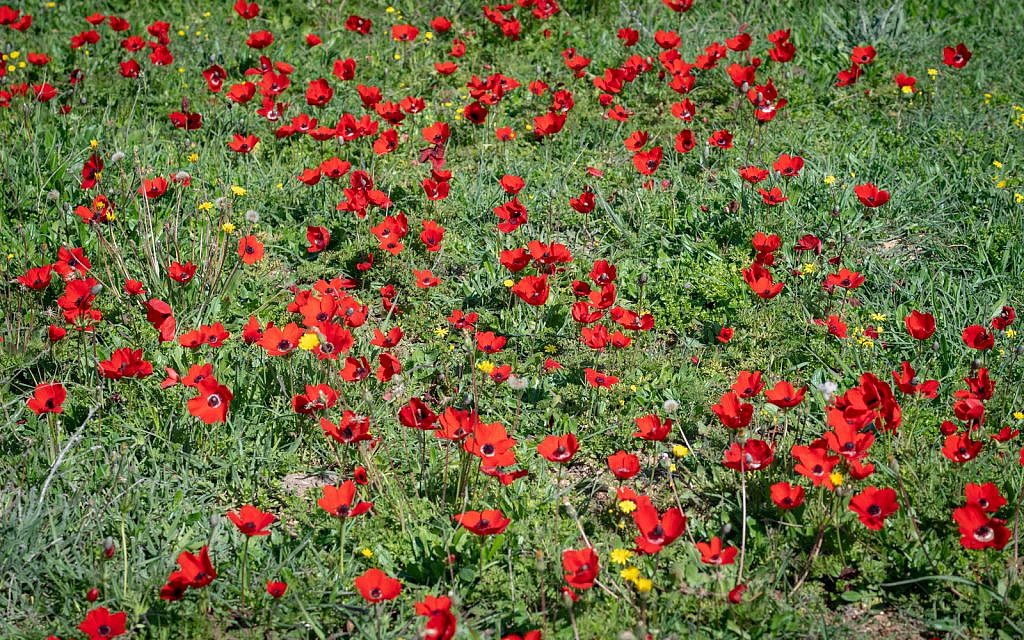 Sufer said dealing with over 1,000 individual fires had cemented a better working relationship and increased cooperation between the Nature and Parks Authority, JNF-KKL, local town leadership, firefighters, police, and the army. The organizations have already organized local fire response teams based on geography, including hundreds of volunteers, to deal with fires this summer, if the incendiary kites continue.

Livshutz said that the fires have been heartbreaking for some of the arborists in the area, who watched their entire life’s work disappear amid billowing smoke this summer. But the winter colors, and watching the land slowly heal itself, also brings hope.

“You can still see the black, in patches here and there,” said Livshutz. “But we also have the red and the green, and all the colors of the rainbow.”