It’s easy to mistake Dikla Laor‘s photographs of women of the Bible for paintings. With their dramatic gestures, lush lighting and colorful, flowing costumes, these striking images resemble works of Baroque masters. But Laor’s artistic works were shot in the last few years using a digital camera on the Golan Heights.

This Passover, Laor’s photographs of female characters from the Exodus narrative such as Pharaoh’s Daughter, Moses’s Midianite wife Zipporah, and the midwives Shifra and Puah — along with dozens of other biblical women — have been made widely available for the first time in a newly published book.

“Women in the Bible on the Golan Landscape” contains the first 42 works in an ongoing project by the Israeli Laor to create interpretive images of every woman mentioned in the Hebrew Bible. The book is the culmination of the first phase of the project, which included several exhibitions in Israel.

Laor, who began the project in 2013, told the Times of Israel in a recent interview that she estimates that she has covered only about one-third of the women mentioned by name in the Bible. 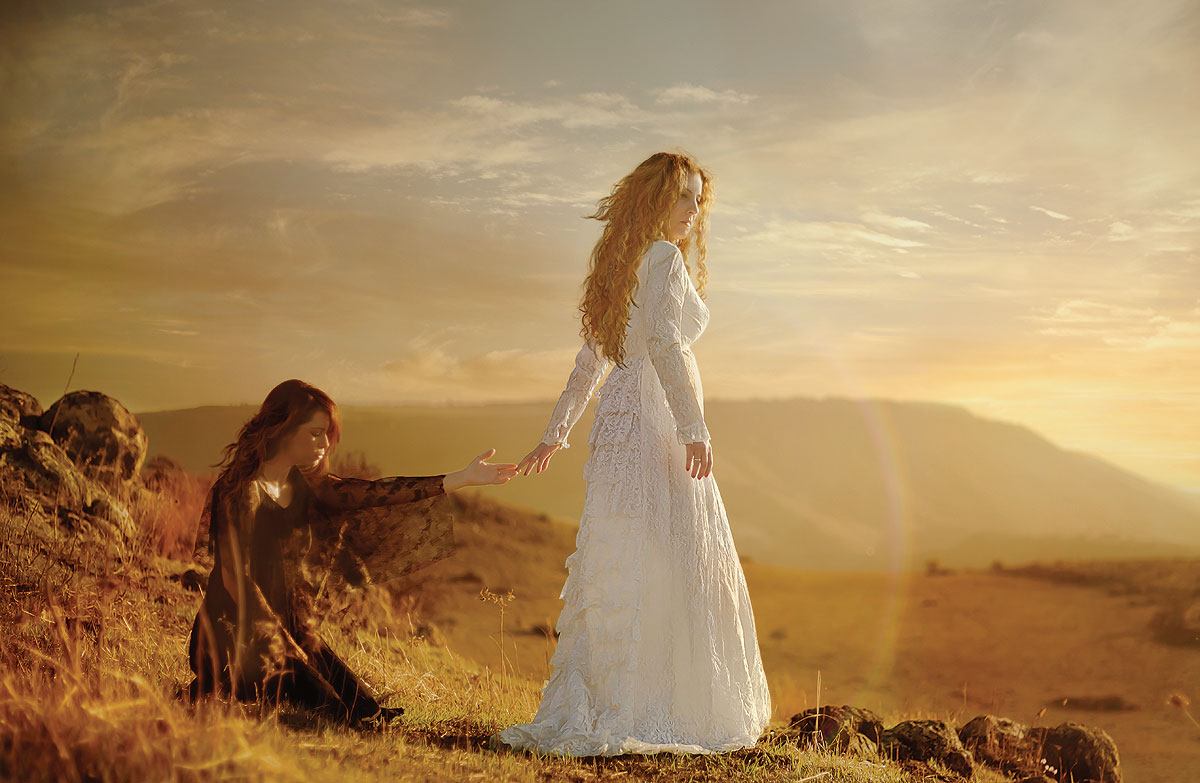 Laor, 42, still has a great deal more work cut out for her — and it is getting harder: The classical Rabbinic commentaries she uses to inform and inspire how she chooses to depict the biblical women do not actually refer to many of them. In some cases, the only information provided by the biblical text is a woman’s name, leaving her to invent her visual commentary completely from scratch. 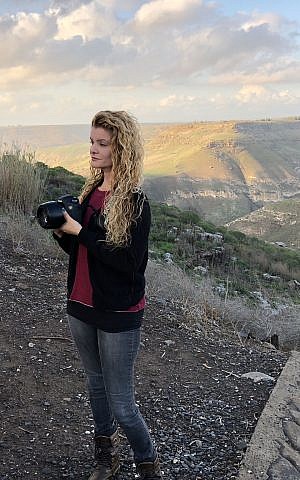 “The individual work that goes into building each figure, the significant need to learn and research before each photograph, the planning and continuous details — and all this before I even think about picking up the camera,” Laor wrote in the introduction to her book, which provides Hebrew and English texts along with her photographs.

Most interestingly, Laor, who could relatively easily shoot most of her striking photos in the locations that their related biblical narratives took place, has chosen not to do so. Instead, she shoots exclusively in various locations on the Golan Heights, where she lives in Givat Yoav with her husband and three children.

“The Golan is my home. I love it, and it challenges me technically and artistically,” she said.

“The magnificent Golan gives me a unique and varied setting: the dryness represents the desert, the green represents fertility and youth, and completely bare mountains connect to finite death,” Laor wrote in her introduction.

For each picture, Laor scouts out the perfect spot and calculates what season and time of day would be best for the visual metaphor she wants to create and the story she wishes to tell. She has to plan deliberately and well in advance, accounting for every detail. She makes all the costumes by hand, draping flowing fabric on the models and fastening it with pins.

More interested in depicting the biblical women in a Renaissance style than trying to make them look like ancient Levantines, Laor does not seek historical authenticity. At first, she recruited friends and relatives to serve as models. 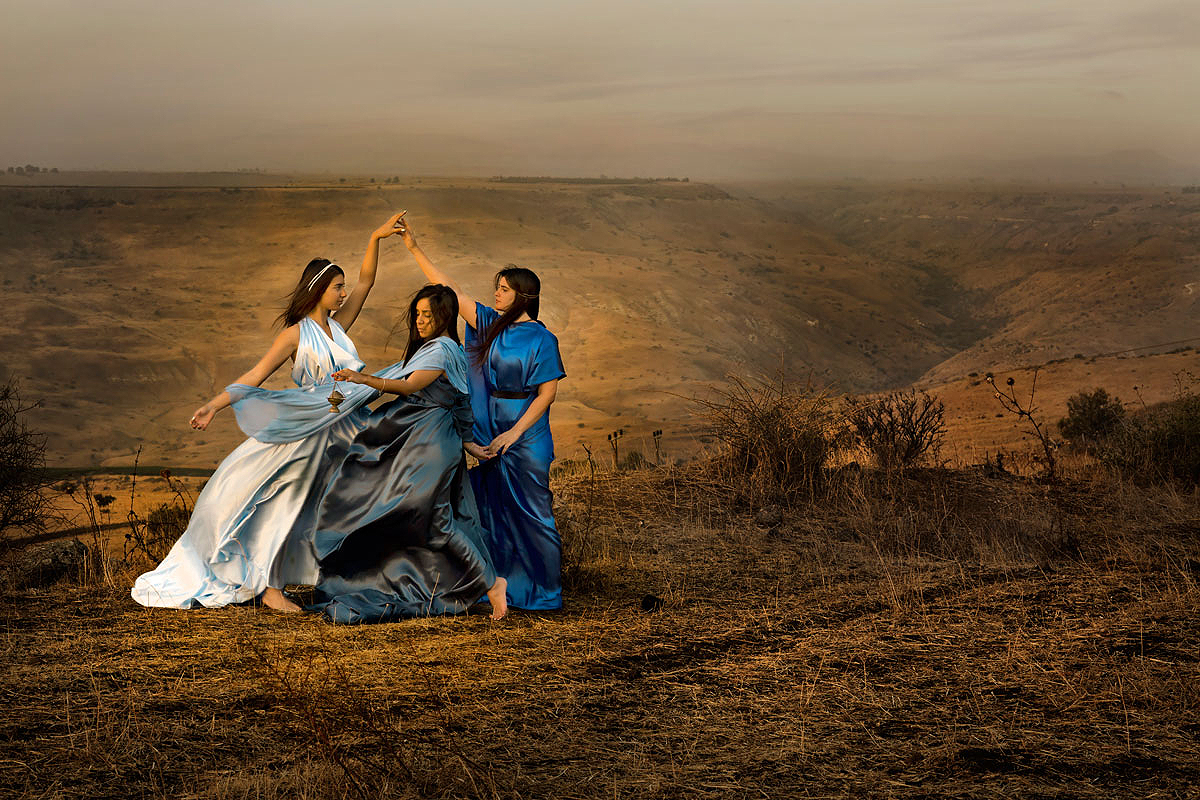 More recently, the pool has widened. The photographer even  enlisted a women she met when the two hit one another in a fender bender to portray the Queen of Sheba. (In that photo, the woman is seen dipping her toe, as she mistakes the glass floor of King Solomon’s palace for water, according to legend.) In one photo, with her golden hair flowing and wearing a billowing blue skirt, Laor herself poses against a brown landscape as Hannah, the prophet Samuel’s barren mother. 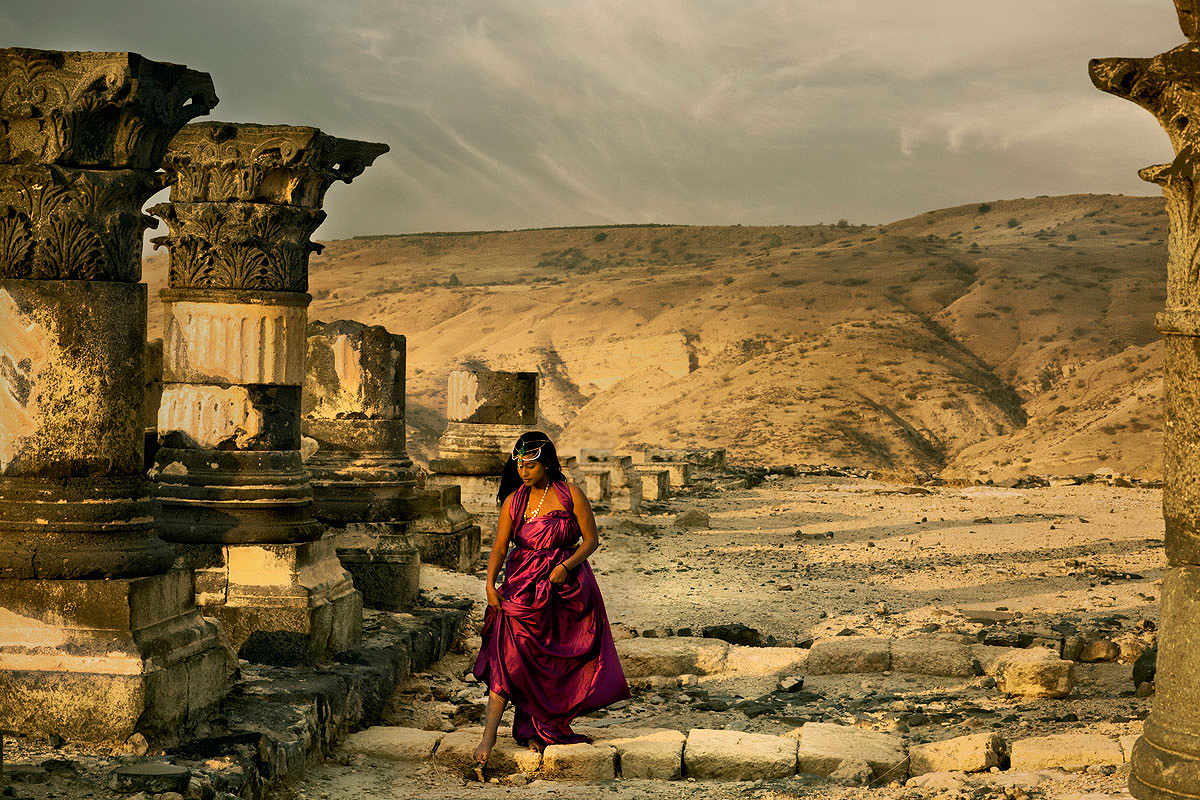 Laor said the most challenging shoots are the ones involving animals. “I always come away from those with a few scratches and bruises, but it is worth it,” she said.

For her photo of Batsheba, Laor had to wait a year until an injured crow showed up at a local petting zoo. She wanted to have the crow (which would not fly off) perched on a rock in the photo — a reference to a Rabbinic legend according to which the bird, representing the devil, has come to test King David.

Her photograph of Eve, involving a snake weighing 70 kilograms, was her greatest challenge to date. 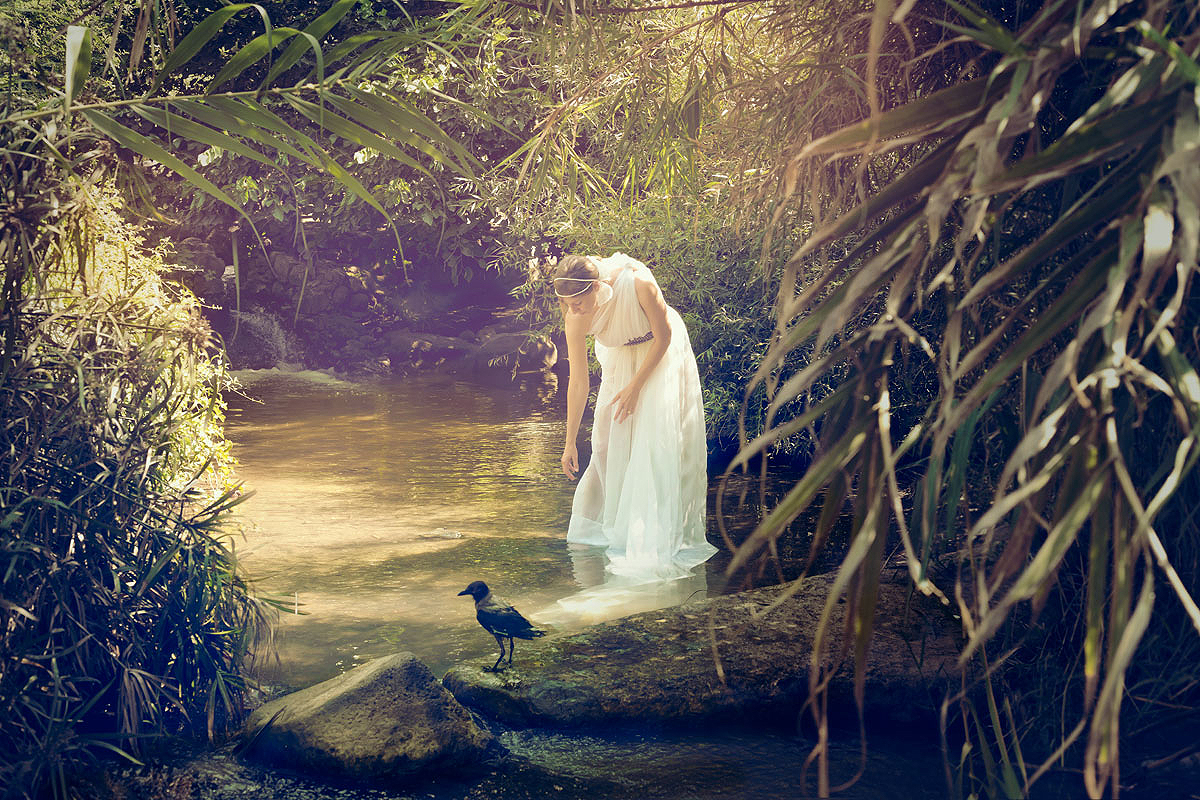 Dr. Amy Kalmanofsky, dean of the Albert A. List College of Jewish Studies and associate professor of Bible at The Jewish Theological Seminary, told The Times of Israel that she appreciated what Laor is doing with her photographs.

“It is laudable that she is highlighting all the women in the Tanach [Bible], especially the lesser-known ones,” said Kalmanofsky, who has written books and numerous articles examining the biblical representation of women and the roles women play in the Bible. 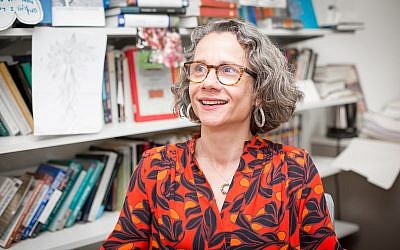 Kalmanofsky said she liked how Laor’s photographs captured the vitality of the biblical women and their stories, thus conveying the essential role women play in the Bible.

“There are gender differences and a hierarchy exists in the Torah, but the text uses women with great intentionality. They are powerful and significant figures. Women are front and center in the Tanach. The challenge for modern readers is to leave their preconceptions [that they aren’t] aside,” she said.

According to Kalmanofsky, the Torah (Five Books of Moses) and the Early Prophets contain many strong female characters. In these books, the basic unit of society is the family, so women wield tremendous power. However, as Israel shifts to a more centralized system — a monarchy — later on, women lose their important role. 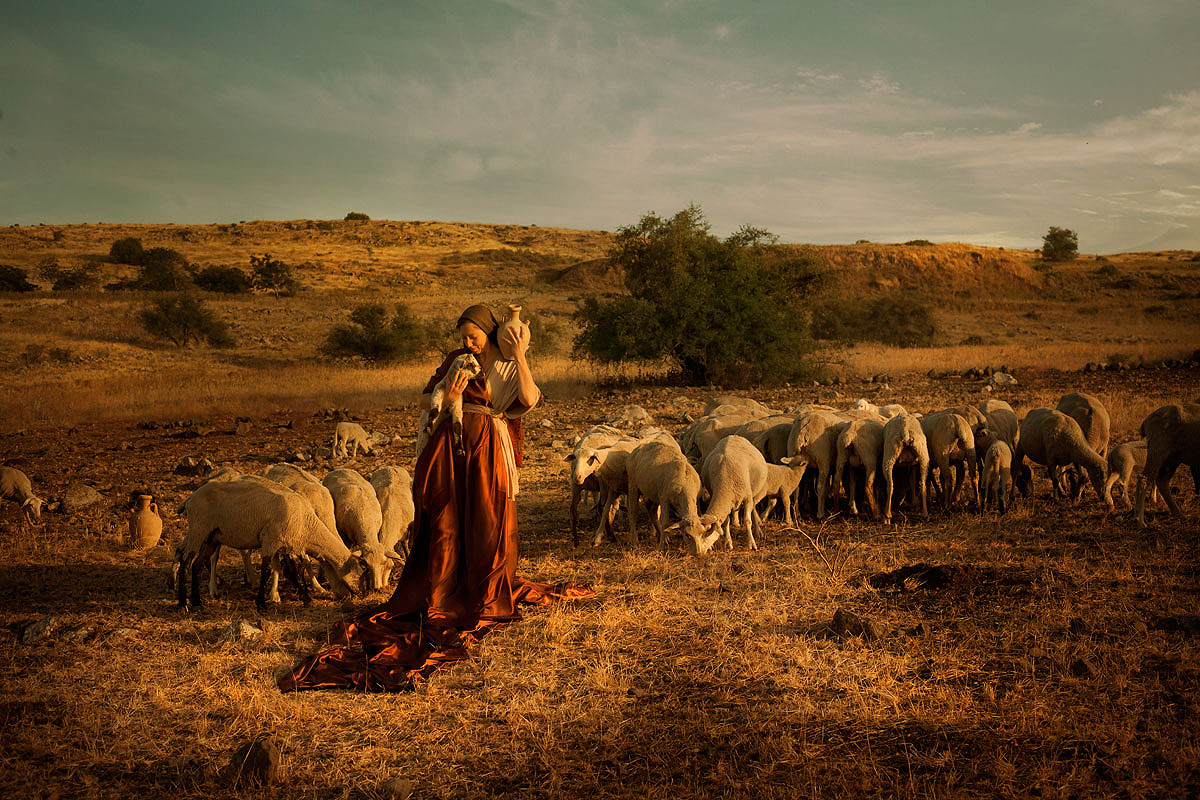 Wherever they appear in the Bible, Laor presents the female characters as strong and positive. Sometimes this comes across through additions to the biblical text, such as a depiction of the prophetess and Judge Deborah on a horse.

Other times, Laor grants herself even more artistic license, as when she portrays Jezebel as a positive, strong, independent woman.

“There is no sign in the photograph that Jezebel is the villain that the Bible presents her as. In the text, she is a deep threat to Elijah, his nemesis. She is the Ba’al figure in opposition to God,” Kalmanofsky noted. 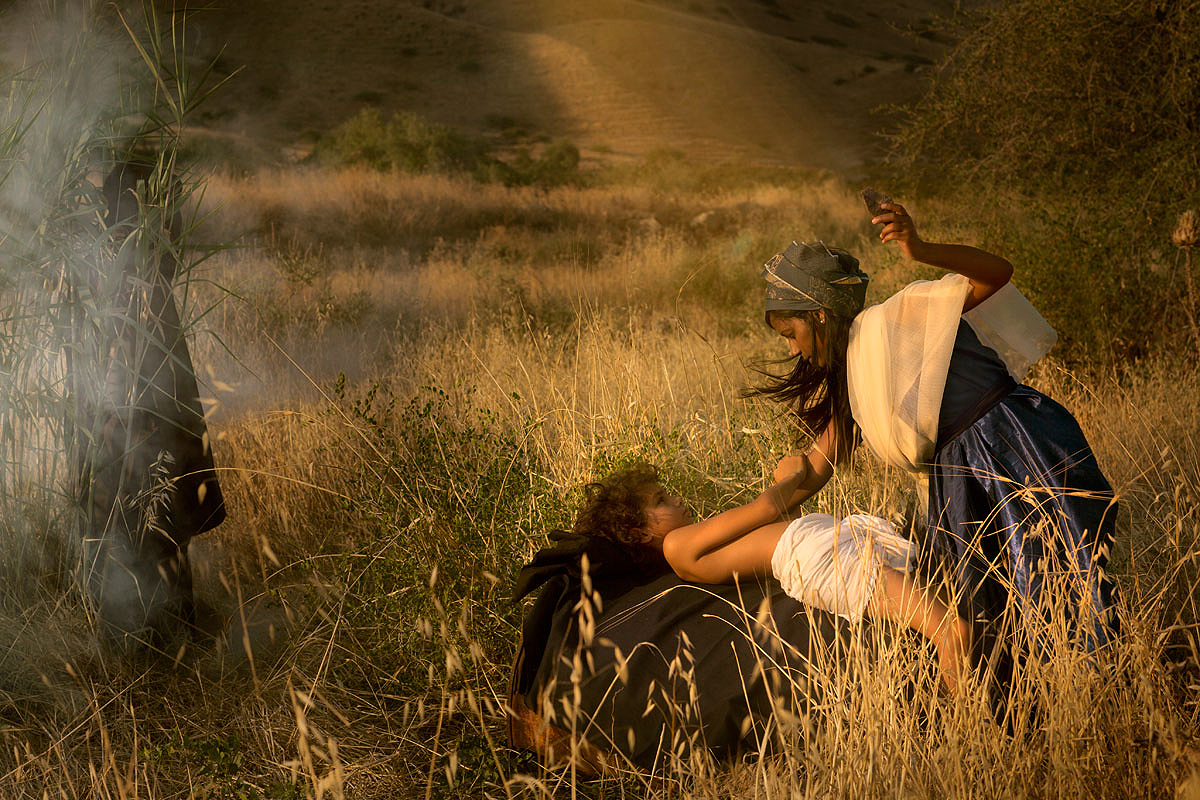 “She’s creating her own midrash [commentary] that sees [the women] in their strength and beauty,” Kalmanofsky said.

By presenting the women alone — there are no male characters in the frames, save for an occasional young boy where necessary — there is no doubt that Laor is inviting viewers to apply their modern feminist sensibilities to her visual biblical interpretation.

“It wasn’t my intention to make a feminist statement. It just ended up emerging out of the photographs themselves,” Laor said.

“Women in the Bible on the Golan Landscape” is available only through Dikla Laor’s website.