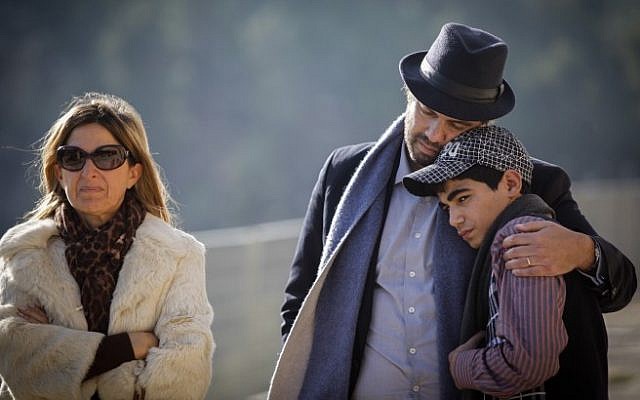 Friends and relatives seen mourning during the funeral ceremony of the four Jewish victims of a terror attack on the HyperCacher store in Paris, that was held at Har HaMenuchot cemetery in Jerusalem, on January 13, 2015. (photo credit: Yonatan Sindel/Flash90)

A furor erupted Tuesday surrounding comments by US President Barack Obama and administration spokespeople that suggested a January 9 terrorist attack on a Paris kosher market was not motivated by anti-Semitism.

In an interview with Vox’s Matthew Yglesias published Monday, Obama characterized the four Jewish victims of the attack as random.

“It is entirely legitimate for the American people to be deeply concerned when you’ve got a bunch of violent, vicious zealots who behead people or randomly shoot a bunch of folks in a deli in Paris,” Obama said.

The deli in question was the Hypercacher kosher market in Paris’s Porte de Vincennes, which was attacked by French-born Muslim radical Amedy Coulibaly, who killed four Jewish shoppers and held 15 individuals hostage for several hours before being killed by a police force that stormed the building.

Coulibaly told French media at the time that he had targeted shoppers at a kosher market “because they were Jewish.”

Obama’s comment to Vox led ABC’s Jonathan Karl to ask White House spokesman Josh Earnest on Tuesday if Obama had “any doubt that those terrorists attacked that deli because there would be Jews in that deli?”

“It is clear from the terrorists and the writings that they put out afterward what their motivation was. The adverb that the president chose was used to indicate that the individuals who were killed in that terrible, tragic incident were killed not because of who they were but because of where they randomly happened to be,” Earnest replied.

He added: “These individuals were not targeted by name.”

“Not by name, but by religion, were they not?” Karl retorted.

“There were people other than just Jews who were in that deli,” Earnest responded.

““No, Jon. No, Jon. I answered the question once. No.” Earnest concluded.

“Does the administration really believe that the victims of this attack were not singled out because they were of a particular faith?” Lee asked.

Psaki replied: “Well, as you know, I believe if I remember the victims specifically, they were not all victims of one background or one nationality.”

All four victims in the Hypercacher attack were Jewish.

“I think what they mean by that, I don’t know if they spoke to the targeting of the grocery store, but to the individuals in there,” Psaki said.

Lee pressed: “Does the administration believe this was an anti-Jewish attack on a Jewish community in Paris?”

“I don’t think we’re going to speak on behalf of French authorities and what they believe was the situation,” Psaki concluded.

Both Earnest and Psaki later rushed to backtrack on the refusal to acknowledge an anti-Semitic motive behind the Hypercacher attack shortly after their media appearances.

Psaki noted on Twitter that the administration has “always been clear that the attack on the kosher grocery store was an anti-semitic attack.”

We have always been clear that the attack on the kosher grocery store was an anti-semitic attack that took the lives of innocent people.

Earnest similarly took to Twitter to say that the “terror attack at Paris Kosher market was motivated by anti-Semitism” and that Obama “didn’t intend to suggest otherwise.”

Our view has not changed. Terror attack at Paris Kosher market was motivated by anti-Semitism. POTUS didn't intend to suggest otherwise.

The episode left critics angry and some supporters of the administration even angrier.