It was May 1940, and British citizens were gripped by a wave of panic that Germany would invade their shores at any moment.

Terrified of an imminent attack, the British government authorized the arrest and detention of all German citizens residing in the United Kingdom. Ultimately, around 30,000 Germans were rounded up and sent to internment camps – the vast majority of whom were Jewish refugees who had fled the Nazis, many with British assistance.

Among them were my grandfather, my great-grandfather and my great-uncle. Those three men were among the approximately 2,000 people held in Hutchinson Camp on the Isle of Man during World War II.

My great-grandfather, Rabbi Dr. Paul Holzer, and my grandfather, Otto Levy, both died before I was born. Relatives say that neither of them – nor my great uncle, Marcus Horovitz – spoke at any length about their experiences in the camp.

A new book from British journalist Simon Parkin, “The Island of Extraordinary Captives,” illuminates the lives of those men held in Hutchinson Camp after fleeing Germany, where they suffered the trauma of being “imprisoned by one’s liberator.”

Deemed “enemy aliens,” the refugees held in Hutchinson Camp were rounded up in mass arrests in 1940 after most had earlier been granted exemptions from internment. Some had arrived as teenagers on the Kindertransport; others – like my great-grandfather – had been imprisoned in concentration camps and managed to escape to the UK. Once there, they were placed behind barbed wire. 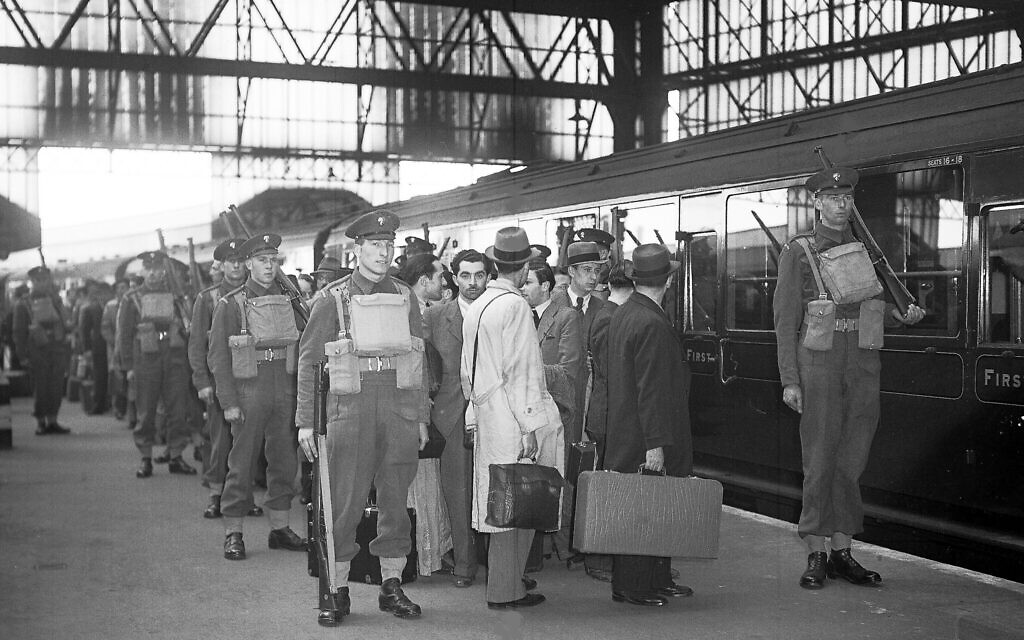 Enemy aliens, who were arrested in a big police round-up, leave London, England, May 17, 1940, under a heavy military escort for internment camps. (AP Photo)

“During May 1940 – which is really when national paranoia is at its highest in the UK… [there is] that mixture of the fear of invasion, plus the British tabloid newspapers have stoked up fear about the refugees that were allowed into the country,” Parkin told The Times of Israel in a recent phone interview from the UK. “And this allows the government, or forces the government, to take this policy.”

About 80% of those arrested were Jewish refugees, and most of them were held in a number of different camps on the Isle of Man, located in the Irish Sea between England and Ireland. The most famous camp is thought to be Hutchinson Camp, which at its peak held 1,200 prisoners, many of whom were prominent artists, musicians and intellectuals.

Parkin, a UK-based journalist, first stumbled across the story of Hutchinson while researching the history of British prisoners of war in the National Archives. He’d intended to write an entirely different book.

“It was while looking through one of those documents that I came across this issue of ‘The Camp’ newspaper, which had been made in Hutchinson, and it was sort of like a fanzine, handmade with illustrations… It seemed to be written by prisoners but it was clearly anti-Nazi, and it was quite an arresting document,” said Parkin. “And that’s what led me into the world of internment.”

That self-published newspaper, simply titled “The Camp,” provides a world of insight into the attitudes and psychological state of the prisoners held in Hutchinson Camp – even with the limitations and oversight of British authorities.

My great-grandfather, a longtime congregational rabbi, wrote a missive in the newsletter in German ahead of Rosh Hashanah in 1940, speaking of being “torn from our loved ones,” and only holding at bay “the burning pain of separation with the hope that soon we will be reunited with them.”

In a separate issue, he wrote a celebratory dispatch noting the arrival in the camp of a Torah scroll, which he was instrumental in securing for its religiously observant prisoners. 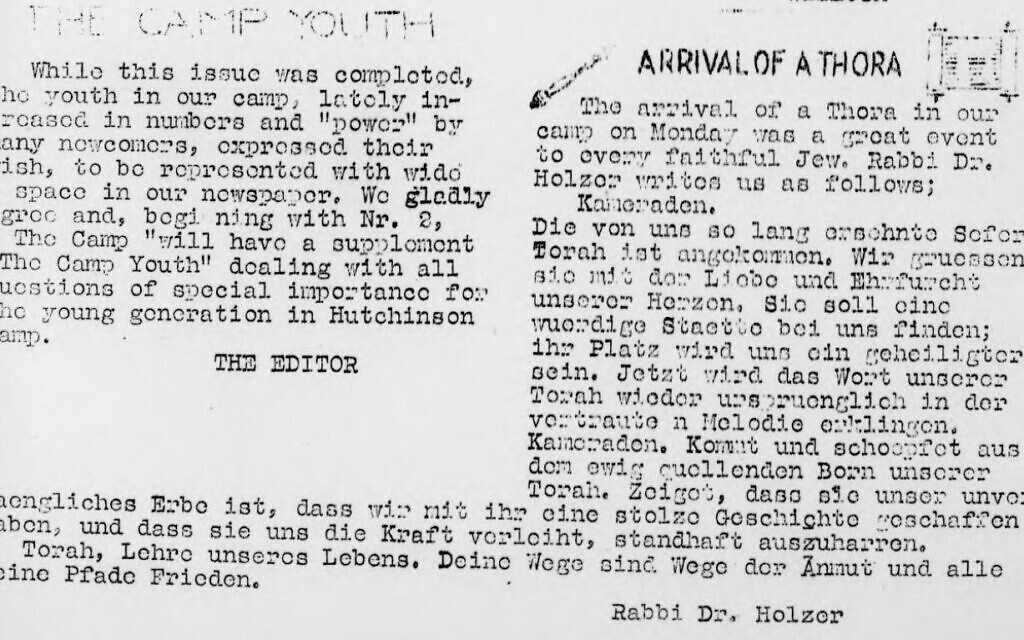 A missive written by Rabbi Dr. Paul Holzer in the September 21, 1940 issue of ‘The Camp’ newsletter in Hutchinson Camp. (© Crown Copyright Images reproduced by courtesy of The National Archives, London, England)

The newspaper’s articles, notes and even letters to the editor reveal anger, bewilderment and a sense of betrayal at being locked up by the British, alongside desperation to prove their anti-Nazi bona fides and even cartoons utilizing dark humor to poke fun at Hitler. In an open letter on the front page of “The Camp” on October 15, 1940, the editor issued a call to the camp commander begging for inmates to be allowed to work for the war effort and “prove our loyalty to Great Britain and our hatred of Nazidom.”

In other such internment camps – in particular, the women’s camp – the co-mingling of Jewish refugees and Nazi adherents was even more pronounced — and more horrifying to those who had fled concentration camps and Nazi persecution

While most inmates in Hutchinson were Jewish, others were suspected to have Nazi sympathies and suspicions ran high. In other such internment camps – in particular, the women’s camp – the co-mingling of Jewish refugees and Nazi adherents was even more pronounced — and more horrifying to those who had fled concentration camps and Nazi persecution.

“There was a lot of paranoia in the camps; there was a lot of concern if everyone was who they said they were,” said Parkin. “With this atmosphere of concern that Britain is about to be invaded, there was this sort of huge anxiety that the British have rounded up all the Jews and put them in camps – so when the Nazis arrived, the British have already done their job for them.”

Hutchinson was somewhat unique with its array of accomplished and worldly prisoners. As Parkin writes: “The boys in their uniforms, the limping elderly, the well-dressed businessmen, the ruffle-haired intelligentsia, the religious men wearing skullcaps or fur hats in midsummer: either the Nazis had orchestrated a comically inventive set of disguises for their spies or, much more likely, the British authorities had arrested thousands of men who were exactly as they seemed: innocents tangled in the mess of live history.”

Despite the devastating circumstances, many of the imprisoned refugees sought to make the best of their time there, setting up leisure activities, an exclusive cafe, and even concerts and art exhibitions. The accounts of time spent at Hutchinson read as hauntingly surreal: locked-up refugees, separated from their families and loved ones, nevertheless taking part in lectures, performances, sporting events and artistic endeavors. 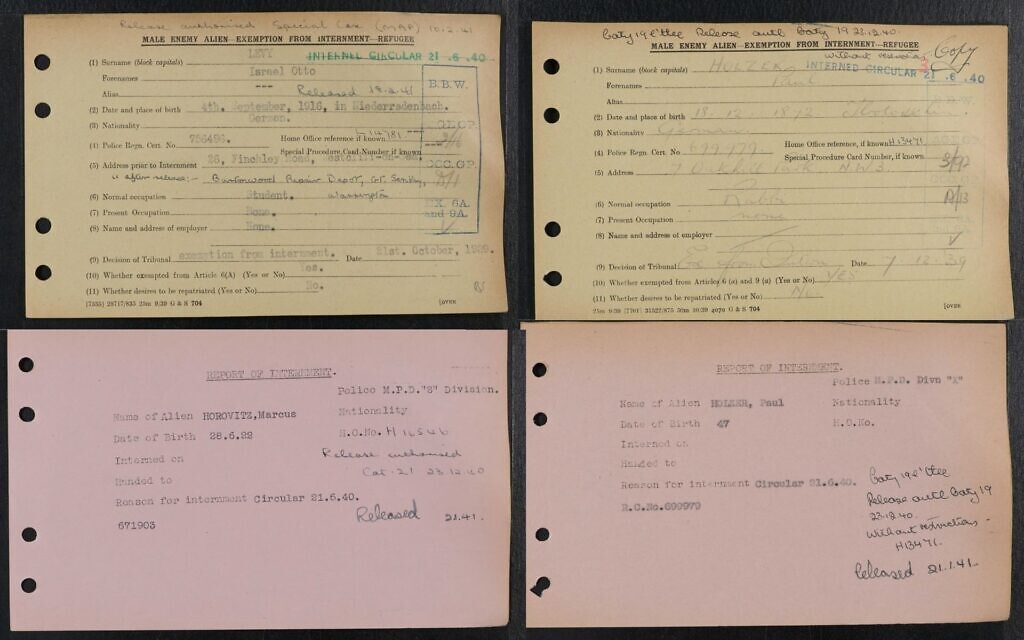 British Home Office documents detailing the internment of several of my relatives after an initial exemption from internment. (© Crown Copyright Images reproduced by courtesy of The National Archives, London, England)

At times it could seem like it was an idyllic artistic retreat, until one recalls the psychological and emotional trauma of the prisoners. Some took their own lives while interned.

Many were terrified that they would be repatriated to Germany or exchanged in a prisoner-of-war swap. Others feared that the Nazis would invade the Isle of Man and delight to find so many Jews already rounded up as easy targets

“No amount of sunshine and leisure could stave off the agonizing appreciation of the situation for men with wives and children or abandoned businesses who did not know how their families would endure without their income and who understood the precariousness of their position, and that of Britain more generally,” Parkin writes in the book.

Many were terrified that they would be repatriated to Germany or exchanged in a prisoner-of-war swap. Others feared that the Nazis would invade the Isle of Man and delight to find so many Jews already rounded up as easy targets.

In one of the most tragic incidents involving wartime refugees in the UK, a ship carrying more than 1,500 Italian and German internees to deportation in Canada – the SS Arandora Star – was torpedoed by a German U-boat on July 2, 1940. More than 800 people were killed.

The British government initially swore that there were no refugees aboard the ship – that only true prisoners of war and avowed Hitler supporters were being deported. In fact, dozens if not hundreds of those aboard were Jewish refugees. Many lost their lives.

Some of the Jewish survivors of the ship’s bombing were – after being rescued from this horrific experience – sent back to Hutchinson Camp as internees.

The sinking of the SS Arandora Star “resulted in one of the largest losses of life in the Second World War at sea, and many, many refugees were on that boat and perished,” said Parkin. “The ship was filled with people who should not have been on that ship. It was supposed to be for dyed-in-the-wool Nazis – and it was not.” 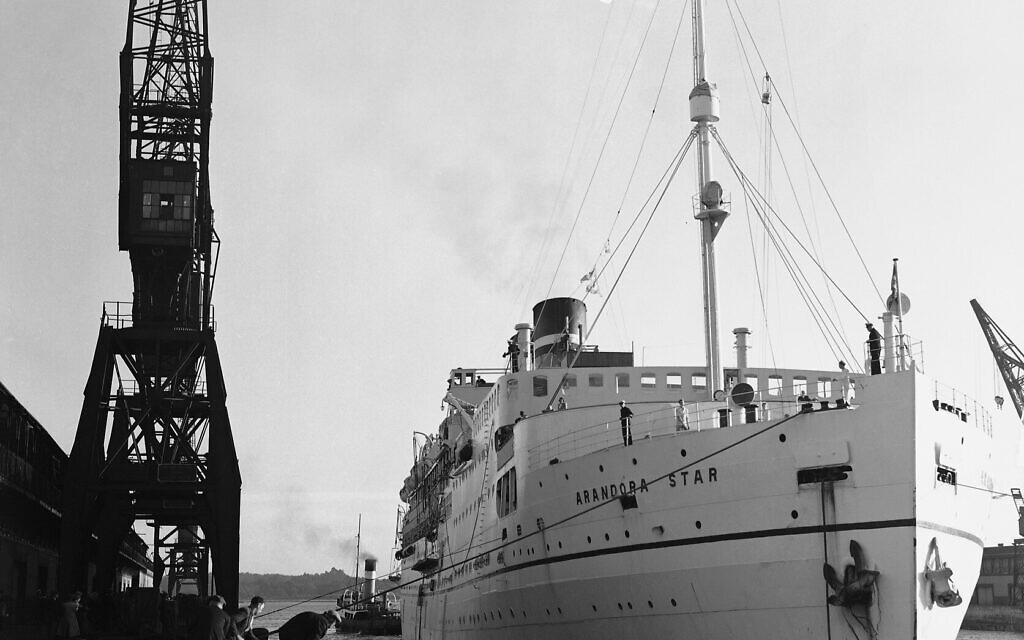 The SS Arandora Star being tied up at Southampton, England, on August 26, 1939. (AP Photo)

The story of the Kindertransport — of the UK helping to rescue around 10,000 German Jewish children from likely extermination — is one known worldwide, taught in British schools and celebrated by the government. Conversely, the decision of British authorities to arrest 30,000 German Jewish refugees just a year later is rarely if ever discussed.

“Britain has focused on a more simplistic narrative of standing up against this grand uncomplicated evil that was the Nazi regime, and being victorious over that,” said Parkin. “The Kindertransport is taught in schools, and the internment is not.”

It’s easy to draw a direct comparison between the British behavior toward German aliens and the treatment by the United States of people of Japanese descent during the war. More than 120,000 men, women and children, mostly in California, were rounded up and placed in internment camps on suspicion of disloyalty to their adopted nation.

To date, the UK has never apologized for detaining German Jewish refugees or admitted to any wrongdoing

Decades later, the US government launched an investigation into the occurrence, issued a formal apology and paid reparations to all living former detainees, in a chapter that is largely considered a shameful one for the United States (which, it should be noted, turned away thousands of Jewish refugees during the war).

To date, the UK has never apologized for detaining German Jewish refugees or admitted to any wrongdoing.

“The British government has never apologized for it, or really properly acknowledged that it failed in failing to distinguish between genuine refugees and so-called enemy aliens,” said Parkin.

“I think the issue of internment should be faced in some way – because if not, then these things can keep happening, from generation to generation, if we don’t hold up these stories as a warning for what can happen when paranoia is allowed to be whipped up in the national press and anti-refugee rhetoric left to run riot,” he said.