A leading Israeli archaeology professor claims that a handful of small male figurines associated with horse statues dating to the 10th and 9th centuries BCE, discovered in multiple sites from the ancient Kingdom of Judah, are in fact representations of the biblical Israelite God, Yahweh.

Hebrew University Prof. Yosef Garfinkel published his theory on Friday in an article for the popular archaeology-themed magazine, Biblical Archaeology Review, in its Fall 2020 issue.

“Yes, I think that people in ancient times believed these figurines to represent the face of Yahweh,” Garfinkel told The Times of Israel on Friday.

His theory was firmly rejected by all archaeologists who agreed to respond to Garfinkel’s premise. Some would not give it the time of day, while others said it is not coincidental that his article was printed in a mainstream magazine and not an academic journal.

“Unfortunately, this article is pure sensationalism that caters to popular, money-generating, demand, in presenting an unfounded and (at best) tentative identification as factual as he ignores existing professional research and studies, including avoiding reference to any of the publications by the excavators,” wrote Tel Motza excavation co-directors Shua Kisilevitz (Israel Antiquities Authority and Tel Aviv University) and Oded Lipschits (Tel Aviv University), whose finds served as a major basis for Garfinkel’s article. 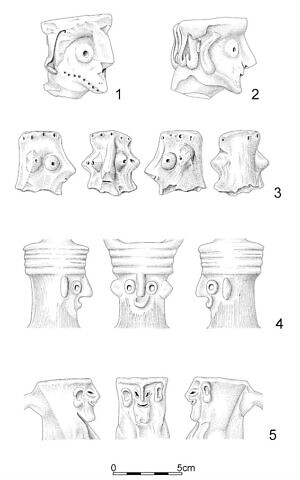 Drawings of the various heads that depict a large male head from the Kingdom of Judah, dated to the 10th-9th centuries BCE (drawing by Olga Dobovsky)

What has led Garfinkel to believe that he holds a statue of Yahweh in his hands is a combination of an anthropomorphic biblical verse from the Book of Habakkuk, the fact that neighboring nations in the biblical era had national gods, and the relative scarceness of male figurines made of clay such as the one his team uncovered at his Khirbet Qeiyafa excavation, some 20 miles or 30 kilometers southwest of Jerusalem.

About a decade ago Garfinkel’s team discovered what he said was a rare male head at his Khirbet Qeiyafa excavation in a layer that he says is securely dated to the 10th century through over 30 radiocarbon dated organic samples.

In the BAR article, Garfinkel writes: “With a flat top, the head has protruding eyes, ears, and a nose. The eyes were made in two stages. They were first attached to the face as rounded blobs of clay and then punctured to create the iris. Because the ears are pierced, the figure may have worn earrings. Around the top of the head is a circle of holes,” which could have been used to hold a crown or other headdress. 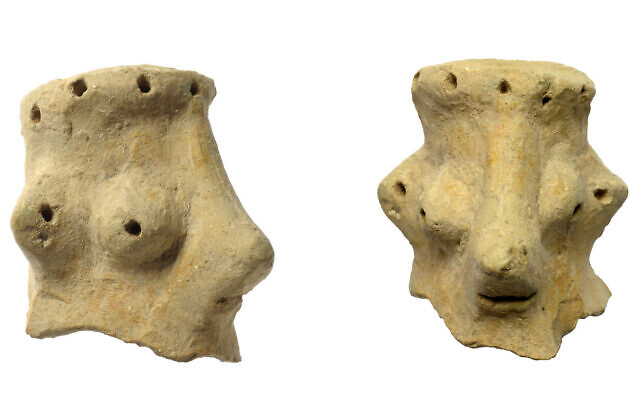 The face of Yahweh? Views of a clay head dated to the 10th century BC, found at Khirbet Qeiyafa (Clara Amit, Israel Antiquities Authority)

While thousands of female fertility figures have been discovered from prehistoric times onwards, the discovery of this sole circa 5-cm (2-inch) clay male statue — there are indications of a beard — made him raise an eyebrow and dig deeper. It is the lone figurine recovered from the 10th-century layer. 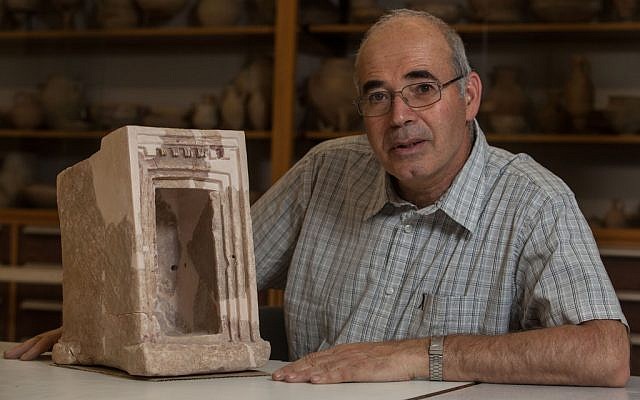 Yosef Garfinkel with a shrine model made of stone, found at Khirbet Qeiyafa (Courtesy of Hebrew University of Jerusalem)

Garfinkel acknowledged that the Bible is very clear on the prohibition against physical representations of god. Whereas neighboring peoples worshipped many gods, “the Kingdom of Judah was a different story and based on two concepts — that there is only one god and not many, and that you shouldn’t make a statute, a graven image of it.”

However, he said the distance between theology and what happened on the ground may be worlds apart. The Bible is rife with exhortations of leaders to the people of Israel to stop worshipping household gods and excavation sites are filled with remains of cultic deities. 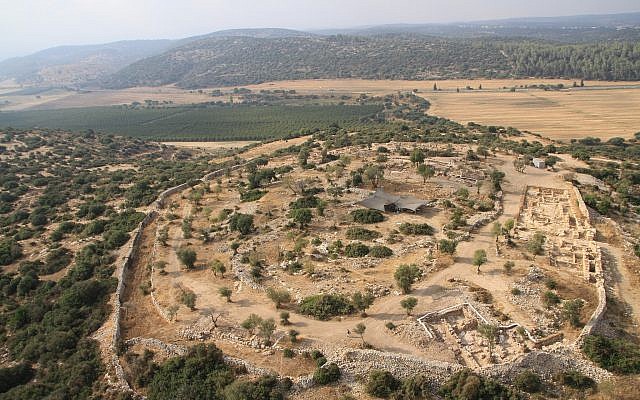 The fortified city of Khirbet Qeiyafa, that indicates urban society in Judah at the time of King David, according to Prof. Yosef Garfinkel, Head of the Institute of Archaeology, Hebrew University. (courtesy)

Garfinkel said that the Canaanite tradition depicts the god “El,” a name also preserved in the Hebrew Bible, as an older god, a Zeus-like figure often sitting and holding a scepter. He believes that his clay figurine depicts a god unlike all others because the god riding a horse is “a totally different iconography, the horseman is something new,” he said.

During the Kingdoms of Judah and Israel, neighboring early Iron Age (11th–9th centuries BCE) kingdoms each had a different god: the Moabites (and possibly the Ammonites) had the god Chemosh; the Edomites had Qos. “And here we had Yahweh,” said Garfinkel. “Every territory developed their own god.” 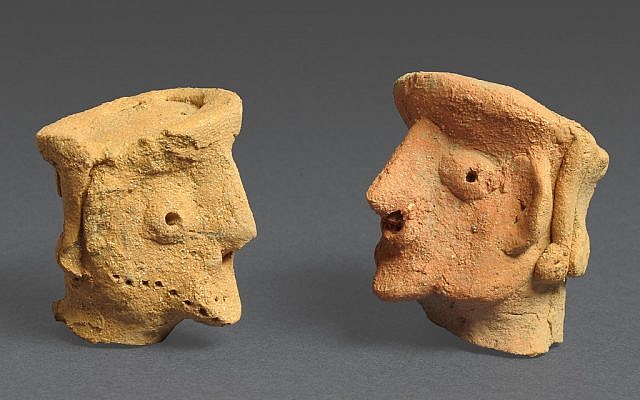 Shortly after Garfinkel’s male figurine was discovered, the excavations at the unexpected temple complex at Tel Motza, 9 kilometers or 5.5 miles northwest of ancient Jerusalem, uncovered two similar heads, which were found near to horse figurines. (The temple complex, which would have been active during the First Temple period, is not documented in the Bible, nor is a similar compound discovered in Arad in the 1960s.)

Seeing the heads in the same context as the horses, Garfinkel was then reminded of another male horseman from former defense minister Moshe Dayan’s collection, now found in the Israel Museum. The Hebrew Univerity professor began to wonder: Are these figures related? Is this a god? And if so, which? 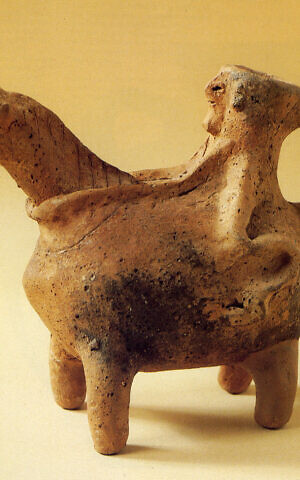 Yahweh on a horse? A pottery vessel in the shape of a horseman, from the Moshe Dayan collection. It was bought in the Hebron Area and dated to the 10th-9th centuries BCE. (The Israel Museum, Jerusalem)

Saying that since these presumed horsemen god figures were found in the Motza temple complex — and not at a home — ruled out that they were simple household deities. Therefore, the statues must have represented “the religion of the time” and its god, Yahweh.

As for why the depiction of Yahweh would be so rudimentary, Garfinkel said that whereas Egypt and the Mesopotamia were rich kingdoms with court artists, the Kingdom of Judah was poor, small (between 5,000-20,000 people at its peak), and barely eked out an existence on the 30 kilometers or so of arable land it had between Beit Shemesh and Lachish.

“We’re talking about peasant society,” he said, that was never a big political power in the Middle East. Aside from the Bible, which preserved regional history, very little remains from the monarchic periods in the Land of Israel.

“The Kingdom of Judah left a great intellectual contribution,” he said, and influenced morals until today, but left barely a mark in material culture. “There’s nothing you can put in a museum, really.”

As his theory is published in international media. Garfinkel is aware that many of his colleagues will dismiss it. “Like every discovery, some will accept and some will reject,” he said.

A chorus of dissent

Of the archaeologists The Times of Israel approached, not one would accept the idea that these small male figurines represented the god Yahweh. Many decided to not comment.

Much of Garfinkel’s theory is based on two male heads that were found in the same temple complex at Tel Motza. 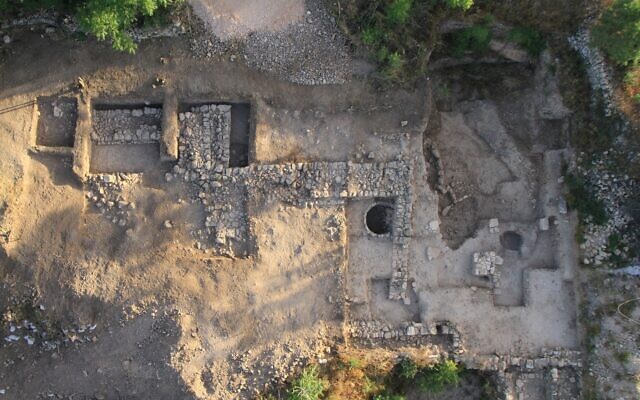 Aerial photo of the temple at Motza at the end of the 2013 excavation. (P. Partouche, SkyView)

In a preliminary response ahead of the more detailed answer to Garfinkel’s article that will soon be published on the Biblical Archaeology Review website, Tel Motza excavation co-directors Kisilevitz and Lipschits rejected the theory in the most absolute of terms and said that “Garfinkel’s article is riddled with factual inaccuracies and a flawed methodological approach.” They likewise castigated Garfinkel for including two unprovenanced items that were purchased on the antiquities market — a Philistine-type strainer jar and a rider and horse-shaped vessel.

“His claim that these vessels, along with the figurines from Motza and Qeiyafa, ‘create a new type of male figurine, with three of them seeming to represent a rider on a horse,’ overlooks their very obvious typological, stylistic and technological divergences,” wrote the archaeologists. 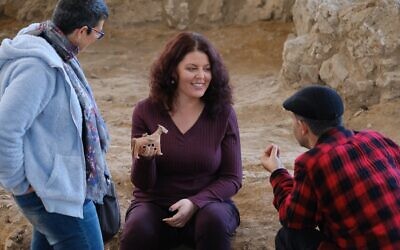 But more strikingly, the god Yahweh, they said, simply did not appear in the region before the 9th century BCE. Garfinkel’s Khirbet Qeiyafa figurine precedes that date. Likewise, they state that Garfinkel’s closing argument, “denying the existence of horse and rider figurines after the 8th century BCE, is patently incorrect.”

“Although we cannot rule out the possibility that the human heads from Motza and Qeiyafa depicted gods, they have no markings, symbols or attributes (such as horns, crescents, bulls), found on figures and visual representations throughout the ancient Near East, that would identify them as divine figures. Furthermore, when gods were depicted on animals, they did not sit on them (they do not need the transport) – they stood on them!” they wrote.

“His association of the figurine heads with Yahweh is based on the very late depiction of Yahweh as a rider on a horse in Habakkuk 3:8, and his erroneous statement that the heads from Motza are ‘outstanding in their large size in relation to almost all known anthropomorphic figurines’ is meant to differentiate them from other figurines in order to substantiate his claim that they are divine,” they wrote. 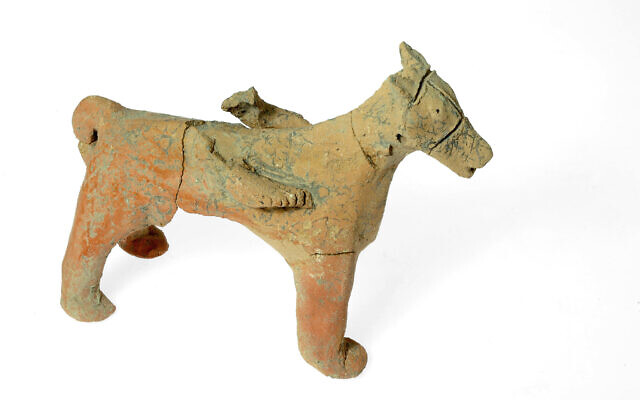 Yahweh’s horse? A clay figurine of a horse, dated to the 9th century BCE, found at Tel Motza. Two such figurines were found together with two heads (Clara Amit, Israel Antiquities Authority)

The archaeologists said that while they agree that one of the two heads found at their site may have once been attached to the larger horse figurine, “Garfinkel’s attempt to relate one of the heads to the small horse disregards the different production technique and scale of these items.”

Furthermore, they claim that Garfinkel “ignores all the early Iron Age horse and human figurines and figures found throughout the region, some of which provide significantly better parallels for the Motza and Qeiyafa figurines.”