NEW YORK — It was the mea culpa heard around the magazine world and beyond.

“For Decades, Our Coverage Was Racist. To Rise Above Our Past, We Must Acknowledge It.” So opened National Geographic’s current issue, “Race.”

“Once we decided to do this issue I felt the only way we could credibly talk about race was to acknowledge our coverage in the past. I felt it was really important that we go there,” said Susan Goldberg, the magazine’s editor in chief, in a telephone interview with The Times of Israel.

As Goldberg sees it, you cannot go forward if you don’t look back.

The issue commemorates the 50th anniversary of Martin Luther King, Jr.’s assassination and is dedicated to exploring what race means in the 21st century. It’s an issue of particular importance given the current political and cultural climate, she said. And in a small way, the issue has some personal relevance for Goldberg. 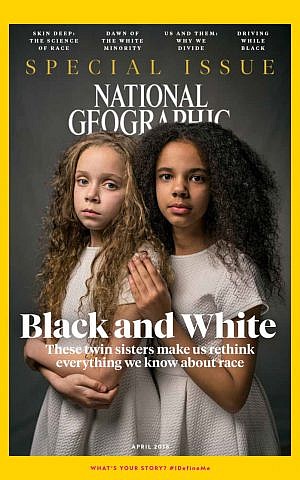 As the first woman and first Jew to helm the magazine, 58-year-old Goldberg said she understands the magazine’s legacy of discrimination.

“I’m… a member of two groups that also once faced discrimination here,” she wrote in the issue’s editor’s note.

Once Goldberg, who is the magazine’s 10th editor since its founding in 1888, decided to focus on race, she enlisted the help of John Edwin Mason, a professor at University of Virginia who specializes in history of photography and history of Africa. It’s an expertise that put Mason “at the crossroads of telling our story,” Goldberg said.

For more than a century, articles were littered with racist language. Words such as “natives” and “savages” were used with abandon. All too often accompanying photographs either sexualized or infantilized subjects, whether it was Pacific Islander women or a group of African men looking at a photographer’s camera.

Though Goldberg wasn’t surprised by what she found, she was deeply affected.

“For example, there was a photograph of two aboriginals and the caption described them as being of the lowest intelligence. That was 1916. Now that is a darn long time ago, more than 100 years, but it’s still really difficult to see that. So we wanted to lay that all on the table and say this is what we used to do and we don’t do this anymore,” she said. 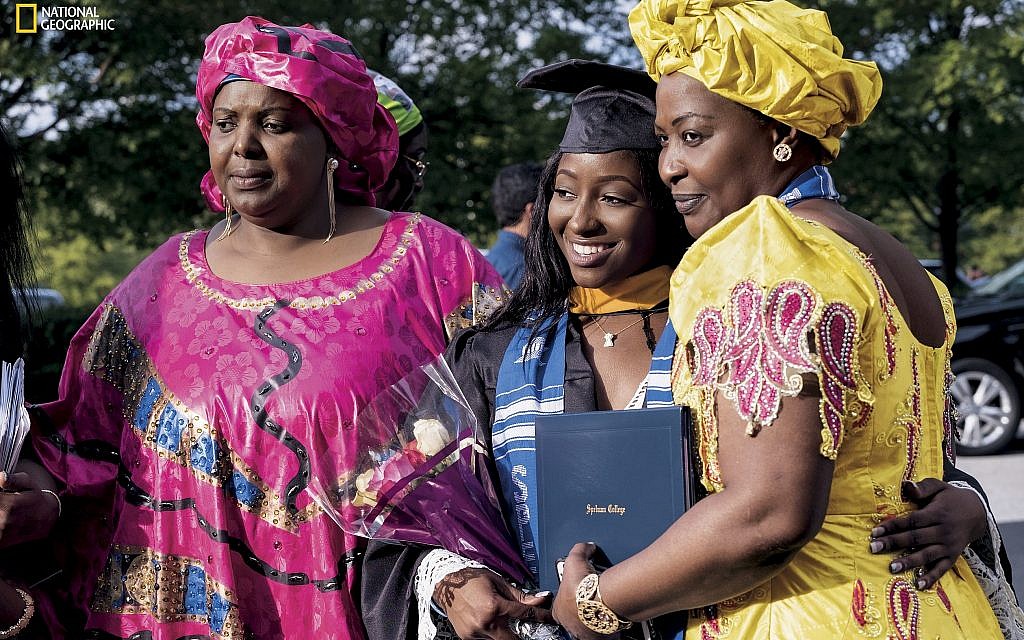 Born in Ann Arbor, Michigan, Goldberg’s first newspaper job was at the Seattle Post-Intelligencer. Next stop was the Detroit Free Press, where she became the first woman to cover the governor and state legislature.

She was the first female editor of the San Jose Mercury News and The Plain Dealer in Cleveland. From there she went to USA Today and Bloomberg, landing at National Geographic in 2014.

Under her stewardship, National Geographic has won the National Magazine Award for best website and the George Polk Award for reporting. In 2015 she received the Exceptional Woman in Publishing Award. 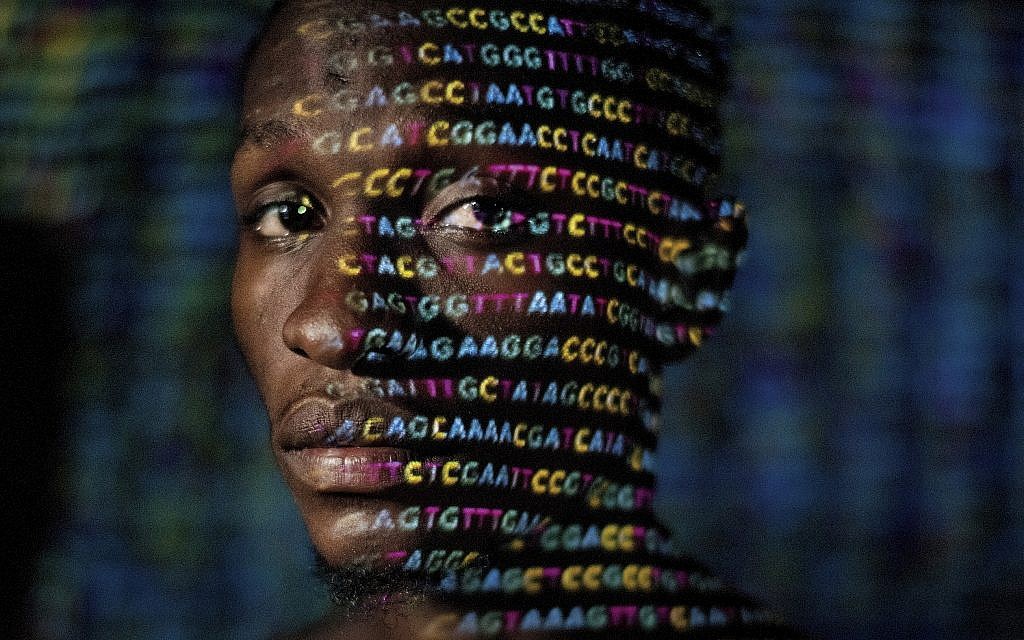 “I’ve been extremely lucky to have been the first woman at a lot of different places. Being born in 1959 my career has followed the seam of societal change. When I’m no longer the first woman editor somewhere then we are going to be living in a lot better place,” Goldberg said.

The race issue isn’t the first time the journalist has zoomed in on a topic dominating the national, and international, discourse.

In January 2017, the magazine published its “Gender Revolution” issue. Gracing the cover was 9-year-old Avery Jackson dressed in pink leggings, a pink cotton shirt, and pink streaks in her hair. Avery is a transgender girl. 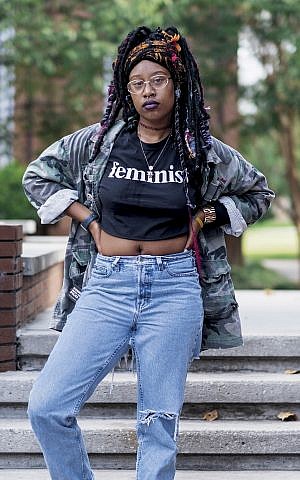 Like the race issue, Goldberg said it was time the magazine address about gender issues, which by then had entered the national conversation — whether in education, the military, or the legal system.

Covering such topics also gives the magazine a platform to reach a new generation of readers, she said. The magazine, which is translated into 33 languages, has 54 million readers, and another 420 million followers on social media.

“Talking about race and talking about gender are very contemporary ways to talk about human culture. That’s part of our mission at National Geographic,” she said.

While the issue, which reaches newsstands on March 25, has already been lauded on social media, some are more guarded in their praise.

In an op-ed on CNN.com Kerra Bolton, who worked as an office assistant in the magazine’s photography department in the 1990s, said the magazine missed an opportunity to present concrete steps for how it plans to increase diversity at the magazine.

“National Geographic’s admission of its racist past is a good first step. It’s going to have to do more. The magazine will have to reflect the world it covers,” Bolton said, speaking to The Times of Israel. 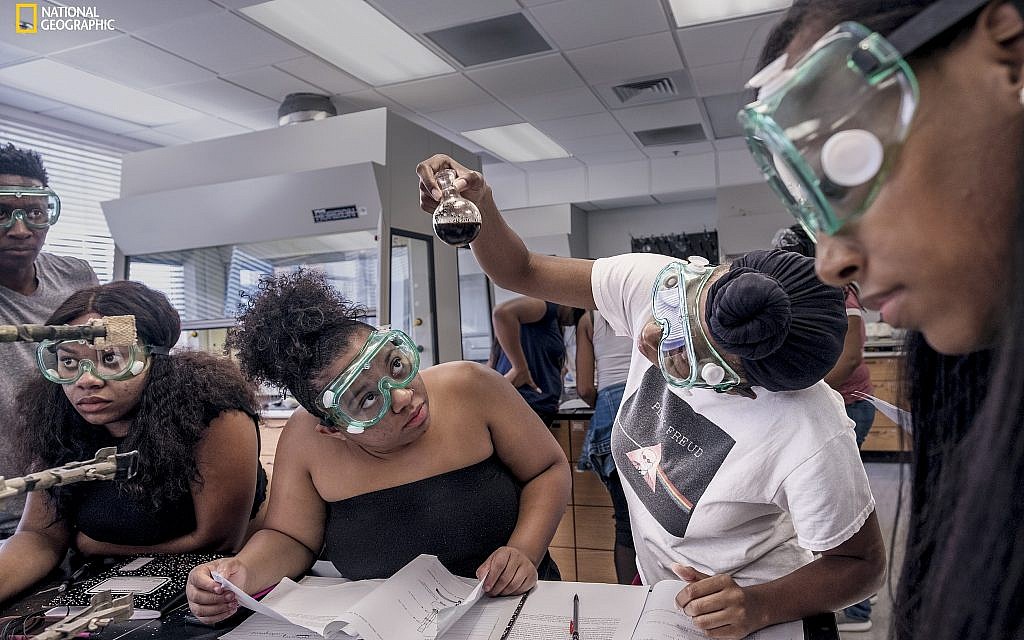 “Racism didn’t just happen in the magazine. It was supported, maintained and promoted by hundreds of decisions made by teams of people. When looking ahead, will those influencing content be experts who are people of color or will they be white? Who will get to sit at the table?” Bolton said. 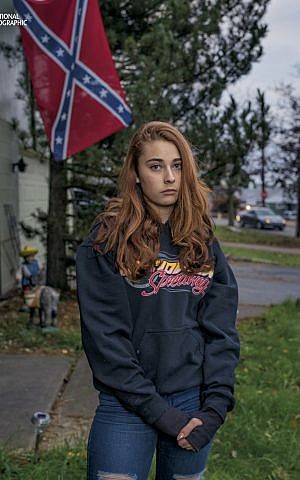 Felyssa Ricco stands outside the house in Hazleton, Pennsylvania, where she lives with her mother and stepfather, Kelly and Jesse Portanova. In addition to flying Old Glory and other flags, such as ‘Don’t Tread on Me,’ the Portanovas sometimes fly the Confederate flag, saying it’s a way of standing up to those who believe it shouldn’t be displayed or who want to disregard America’s history. (Gillian Laub / National Geographic, April 2018 ‘Race’)

The magazine’s culture editor is an African American woman, and the majority of contributors to the “Race” issue are people of color. However, people of color comprise about only one-quarter of the permanent staff and that’s not enough, Goldberg said.

“We are working very hard on that. We are going to be victorious when diversity is baked into the staff. We do need different perspectives,” said Goldberg.

“I’m a baby-boomer, female, and a Jewish person who grew up in the Midwest. That’s different from the 24-year-old African American photo editor who is working on the web. We are going to have different ways of looking at things and that is a great thing,” she said.