Amid fears for his safety, Abdullahi Dool, a senior Somali diplomat who was fired last month for publicly advocating the establishment of formal relations with Israel, was forced to flee his country.

He longs to return to Somalia, but undeterred by the end of his career and ongoing online abuse from pro-Palestinian forces back at home, he continues to call for stronger ties between Jerusalem and Mogadishu — and demands an apology for his dismissal.

“I am a staunch supporter of my country establishing diplomatic ties with Israel. I know many people who are in favor of this move. Like myself they wonder why it has taken this long,” the 59-year-old former diplomat told The Times of Israel in an exclusive interview this week. The conversation was conducted via Whatsapp and email; Dool did not wish to specify his current whereabouts.

Israel has “immense influence in the region and throughout the world,” added Dool, who until late March served as the director of the Somali foreign minister’s office.

“I am convinced that forging ties with Israel will be in our mutual interest. One of the reasons we need to establish ties with Israel sooner rather than later is to bring an end to the war of the extremists that is being waged against our people on a daily basis. The bloodletting of our people must end sooner rather than later and we will need all the help we can get to achieve this goal.”

Israel and Somalia — a Muslim nation located in the Horn of Africa — have never had diplomatic relations, though Prime Minister Benjamin Netanyahu secretly met then-president Hassan Sheik Mohamud in 2016. The Jewish state has in recent years increased its outreach to African Muslim-majority states, many of which are interested in Israel’s expertise in fighting Islamic terrorism, a challenge Somalia is very familiar with.

“I believe Israel can help us swing the pendulum of violence in our country’s favor,” Dool went on. “Israel can also open doors for Somalia because of its sheer influence. They say time and tide wait for no man and I believe ties with Israel should have been established a long time ago. But this is now something I have taken on as a mission that must be accomplished.”

Dool doomed his 35-year diplomatic career last month with two tweets he posted after Somalia unexpectedly abstained on a UN Human Rights Council resolution about Israel’s occupation of the Golan Heights. The abstention raised eyebrows as it was believed to have been the first time a member state of the Arab League forewent an opportunity to condemn the Jewish state in a major international forum. 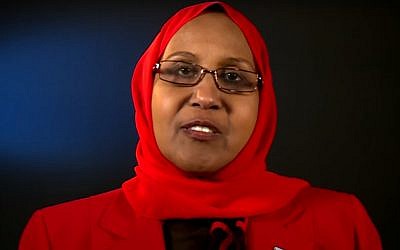 Somalia’s ambassador to the UN in Geneva, Faduma Abdullahi Mohamud, was immediately recalled. A Somali official, speaking on condition of anonymity, told The Times of Israel this week that she managed to convince her bosses that the abstention was a mistake, and that she has since returned to her post.

But Dool saw the unusual move as an opportunity to air his views about the imperative for ties with Israel.

“It is long overdue. Establishing diplomatic relations does not harm anyone but promote peace and cooperation,” he tweeted.

“The Palestinians are their worst enemies,” he wrote in a second tweet. “They never miss an opportunity to miss a chance. They are idiots and losers in Gaza. They should be condemned each time they attack civilians. It is in our interest to welcome Israel.” 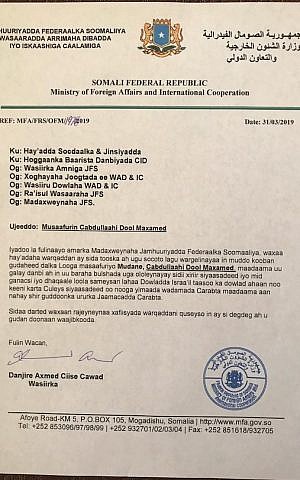 On the same day, Abdinur Mohamed, a spokesman for President Mohamed Abdullahi Mohamed, took to Twitter to declare that as long as Israel holds on to to “Muslim lands” and Jerusalem and continues to deny Palestinians their rights, Somalia will never have diplomatic relations with Israel. Anyone who says otherwise, the tweet continued, cannot work for the Somali government.

In his interview with The Times of Israel this week, Dool, a father of four, did not want to reveal his current whereabouts, saying only that he was “somewhere not far from my country.”

Though he felt he had to flee, and acknowledges that he cannot go home at present, Dool is reluctant to acknowledge that he is in exile from Somalia. “I did not go into exile but my safety and security in my homeland has been seriously undermined by the publicity generated by my dismissal,” he said.

Asked about his plans for the future, he replied: “I don’t have a crystal ball to know what tomorrow may bring, but I think I will be away for some time as the current situation is not conducive to my immediate return. I truly love my country and I am very passionate about it, but I am really going to miss my homeland.”

Dool said that he would love to stay in Somalia but would “need protection to serve in my country because of the unnecessary publicity that was generated by my dismissal.” 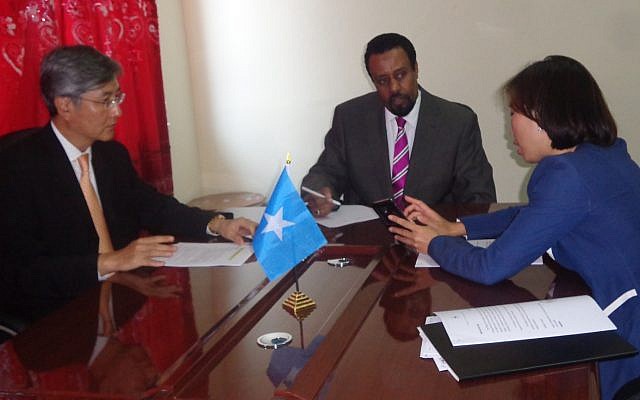 The harsh reaction to his tweets greatly surprised him, since he noted on his profile that he was writing in a personal capacity, Dool said.

“I was in fact taken aback by the reaction. Little did I know my tweets, based on my personal views, will draw such a reaction! I know the difference between official tweets and ones that reflect personal opinion,” he said. “As you know we are not automatons. We are human beings who have opinions.”

As surprised as he was about having gotten the ax, he still would have written what he did even had he known in advance what would ensue — “because these are my convictions,” he said.

“I believe I am owed an apology,” he added.

BREAKING Somalia Government fires Mr Abdullahi Dool Director of the office of the Foreign Minister over tweets calling for diplomatic ties with #Israel . According to @DalsanFM#Somalia pic.twitter.com/2RMghTSmIt

Dool was born in 1960 in Beletwyne, near the Somali-Ethiopian border. After attending university in India, he joined the Foreign Ministry in Mogadishu and served in Kuwait and London.

After a civil war broke out in his country he quit the UK embassy but remained in London to work as a private consultant. Nearly 20 years later, in 2011, he returned to Somalia, where he served as deputy energy minister before taking up various senior posts in the Foreign Ministry. 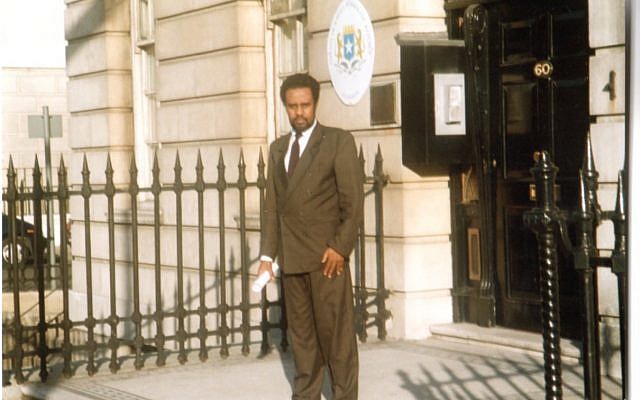 Back in still-volatile Mogadishu, he survived three bombings, one of which broke his left collar bone. But despite the ongoing violence and the abrupt end to his diplomatic career due to two tweets, which he deleted soon after posting, Dool remains fiercely patriotic.

“Our country has all the ingredients of success. Apart from the well-known and well-documented blessings God has bestowed on our country, Somalia has a dynamic, vibrant and entrepreneurial population,” he said. “I believe the future of Somalia is bright and glowing.”

He even refused to criticized the people responsible for his unceremonious dismissal.

“I believe there is nothing to be had from pettiness. One must rise above petty matters,” he said. “On the other hand, I believe damaging our country, its image, interests or standing is unpatriotic and self-defeating. You cannot cut off your nose to spite your face. If we damage the name or standing of our country, who will respect us or show us mercy? For that reason, in my view it is unpatriotic to talk ill of our officials or leaders.” 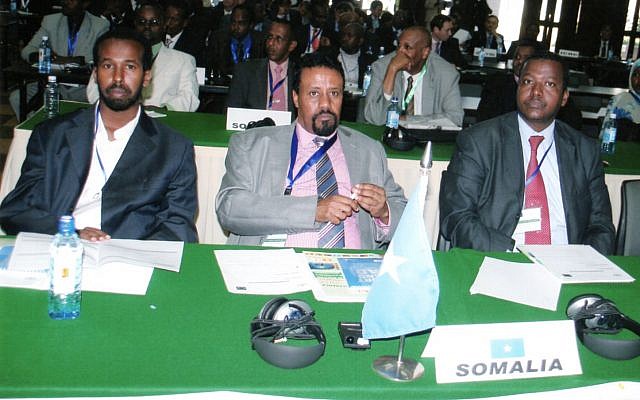 Dool did, however, level harsh criticism against Mohamed, the president’s spokesperson, who had declared that no official who calls for ties with Israel could continue serving. Dool said the Somali president and prime minister should “not allow such misconduct” in their government.

“As you know,” he added,” our country is dependent on the international community for support and solidarity, and the practice of anti-Semitism in our government is unacceptable if not unthinkable. Bigotry in our government is against everything we stand for as a nation.”

Any foreign ministry merely seeks to look out for its country’s interests, he noted. “Nobody should be penalized for doing just that. It is our duty to give vision, purpose and direction to the foreign policy of our country.”

While Somalia is and will always remain part of the Arab world, Dool declared, that should not prevent it from establishing formal relations with Israel.

It’s a message Dool continues to spread on his Twitter account, where he also celebrated Israel’s effort to land a spacecraft on the moon as a “great step.”

Like me or loathe me, I am championing Somalia establishing ties with Israel. I believe this is long over due. It should have been done decades ago. This is in line with our unshakeable belief that it is in our national interest to forge ties with all nations.

Foreign Service is about opening doors not closing down any. There are those who see the world in black or white. But there are 620 colors. I am wondering how reaching out to one nation can mean shunning another. Somalia must forge ties with all nations! How can one twist this?

#Israel has taken a great step to send a #spacecraft to the moon but a small setback on its landing. The next space craft will make it safely to the moon. Kudos to #Israel. "If you didn't succeed the first step try again" by BN.

Continuing to shun Israel will not help the Palestinians even one bit, Dool said, though in the interview — as opposed to his tweets — he refrained from calling them names.

Asked when and how he came to believe closer ties with Israel were beneficial to his country, Dool responded: “You are making it like coming out of a closet. I don’t see it that way. To the contrary, I think forging ties with Israel is in the national interest of my country. We can only ignore regional and global trends at [our own] peril.”