Actors belt lyrics from balconies in ‘Morning Star,’ a production about 20th century greenhorns, held in the very Eldridge Street Synagogue where their characters once worshiped

NEW YORK — Under a majestic round blue stained-glass window embellished with a Star of David cutout, the sanctuary at the Eldridge Street Synagogue on the Lower East Side of Manhattan was packed on Tuesday evening.

But the 150 people who sat in the rows of dark wooden pews were not here to worship. They had come to see those who would have been part of this congregation over 100 years ago come alive again, in song.

Tuesday night was the New York debut of “Morning Star,” an opera composed by Ricky Ian Gordon, a leading writer of vocal music who was sitting in the audience, lip-syncing along with his actors.

“I feel thrilled, I feel like it’s very alive,” he told The Times of Israel during intermission. “I feel like historically, something is happening here.”

Based on a somewhat forgotten 1940s play by the same name, “Morning Star” traces the story of an immigrant Jewish family who, like many in the early 20th century, struggled to find a better life on the Lower East Side of Manhattan. 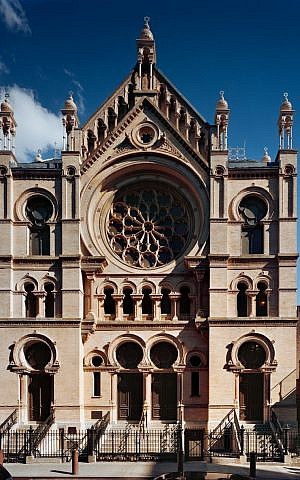 Through their journey, the Feldermans’ destinies are shaped by real historical events such as World War I and the Great Depression. But the most direct impact on their lives came from what is today known as the deadliest industrial disaster in the history of New York City: the Triangle Shirtwaist Factory fire, which erupted 107 years ago on March 25, 1911.

The tragedy killed close to 150 sweatshop garment workers, many of whom were Jewish women. Some were burnt alive, some died of smoke inhalation, and others fell or even jumped to their deaths in despair as the factory went up in flames.

“It’s an amazing piece because it’s so recent in our history that I find that so many people have a personal connection to it,” said the show’s artistic director Eric Einhorn. “I, like many American Jews, am the great-grandchild of immigrants; my maternal grandfather came from Romania, he was a tailor, he worked in the area.”

“It’s about a Jewish family — which, that in itself transcends time periods entirely,” Einhorn said. “To be able to put on stage these kinds of characters in a way that’s truthful and honest and non-stereotypical is really exciting to me.”

Opera, out of the theater box

Einhorn, who has already been called a rising star in his field, is part of a company called On Site Opera, known for taking productions out of the traditional theater and into their natural habitat.

“We match the piece that we are producing with the space,” he told The Times of Israel. “We scout locations like a film set and we come in and install these productions in the space in a way that totally surrounds the audience.” 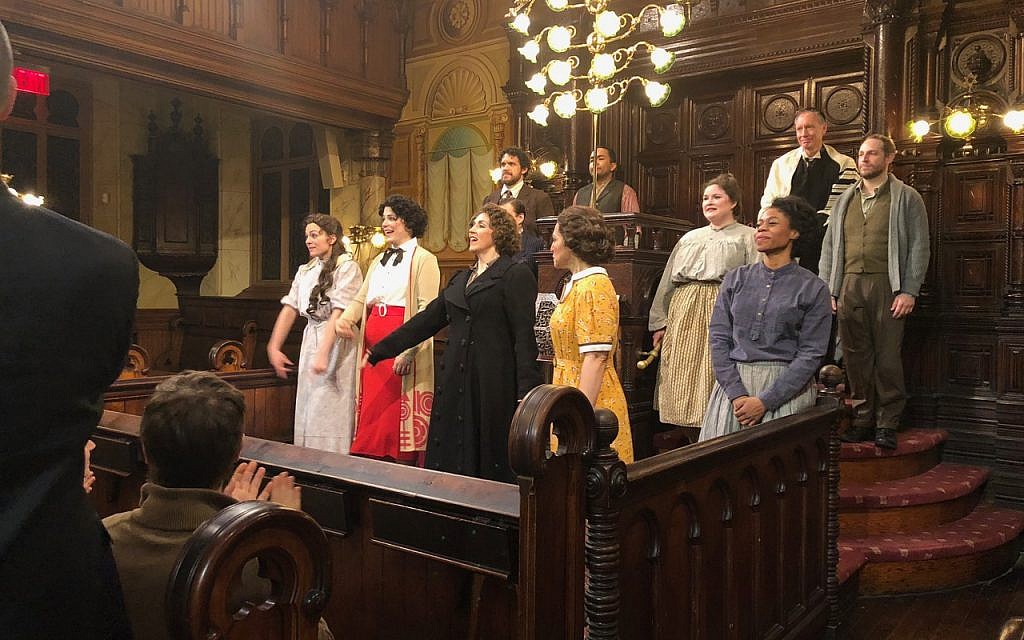 “Morning Star” is literally a head-turning performance. Audience members who attended the dress rehearsal quickly understood that to catch it all, they’d have to break away a natural instinct to face forward towards the synagogue’s ark.

Singers used all areas of the sanctuary, from the back or even the upstairs balcony. Performers moved up and down the aisles, allowing all spectators to see facial expressions up close — something even a front row seat at a traditional theater wouldn’t compete with.

The sanctuary offered more than a mere stage set, rather it provided an ornately detailed space, with a massive chandelier made of some 80 small lamps and a few Stars of David, hanging right above the pews. 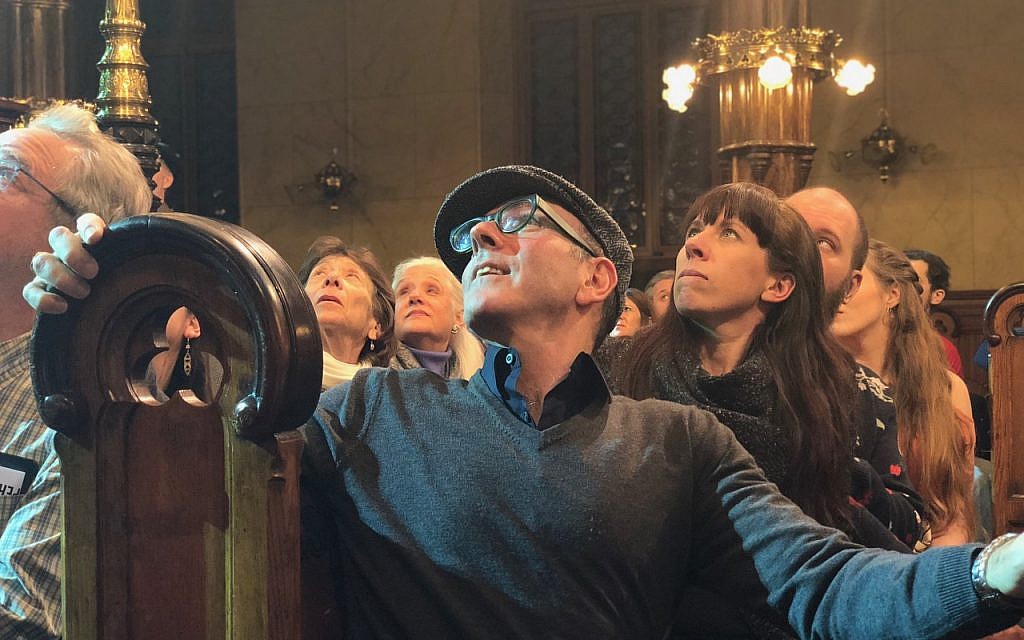 Audience members craned their necks and turned around in their seats during the performance of ‘Morning Star’ at the Eldridge Street Synagogue on Tuesday, March 20, 2018. (Danielle Ziri/Times of Israel)

Over the past six years, On Site Opera has taken audiences to see “Mozart’s Secret Gardener” in a community garden, “Milhaud’s Guilty Mother” in a Hell’s Kitchen garage, and the world premiere of “Musto’s Rhoda and the Fossil Hunt” at the Museum of Natural History’s Dinosaur Hall, among others.

When it came to “Morning Star,” Einhorn and his team searched for a space that would illustrate the 1910 American Jewish immigrant experience.

“At first, we were looking to mimic a domestic environment a little more, like an apartment or even a factory,” he recalled. “But we knew it needed to be on the Lower East Side. It was not only about the space but the neighborhood it was in also.”

They visited many possible venues before stumbling upon the Eldridge Street Synagogue, also known at The Museum at Eldridge Street, a true historic gem in the heart of Chinatown. 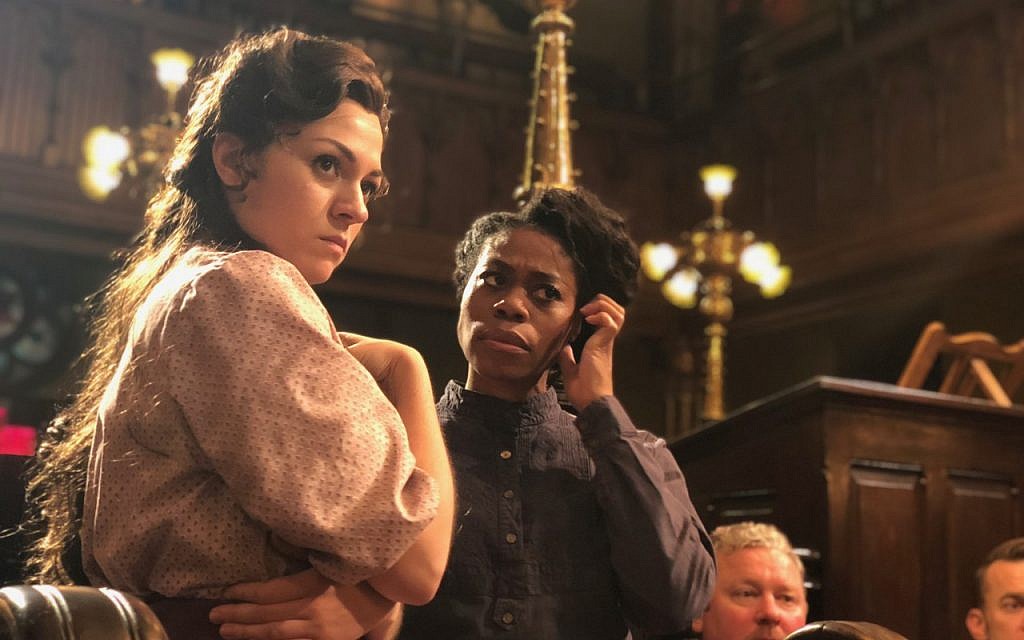 “We realized the synagogue’s own history with the Triangle Shirtwaist fire and these [characters in the piece],” Einhorn said. “It just became very clear that that was the place to do it.”

Indeed, the connection between the story of “Morning Star” and the synagogue can be traced in a direct line. The story’s characters would have been the same people who would have walked the streets of the Lower East Side and even worshiped here at the time.

Built in 1887, the Synagogue at Eldridge Street was the first grand house of worship built by Eastern European Jews in America, and served as a true symbol of their intention to settle in the US and blend their Jewish identity with their new American one.

“The community flourished for a very long time,” Chelsea Dowell, the museum’s marketing director, told The Times of Israel. “But that neighborhood, over time for a number of reasons, became less and less Jewish and so the congregation, their finances and their resources, began to dwindle.” 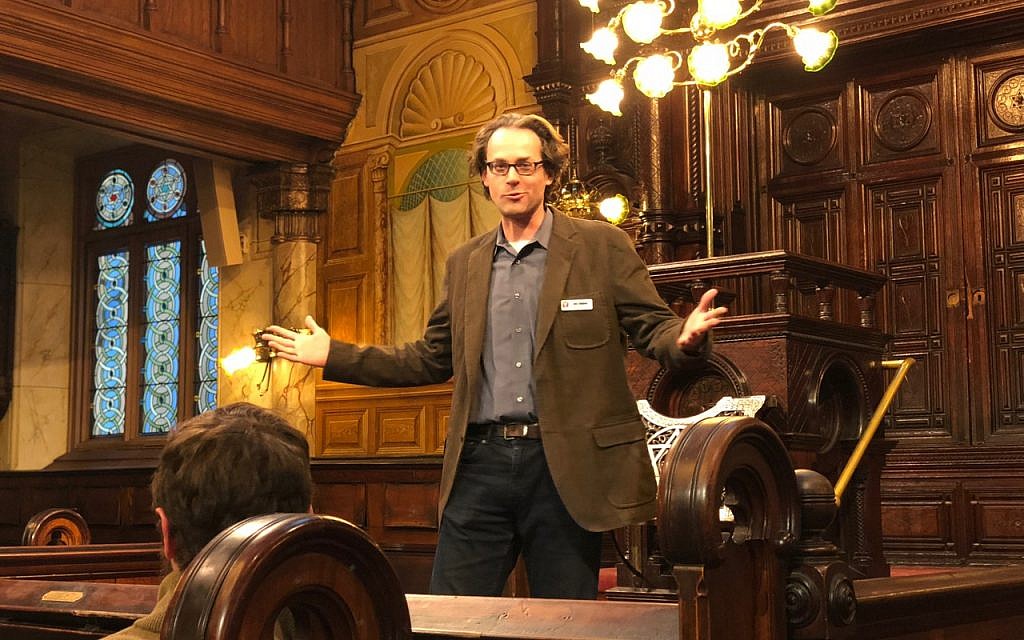 By the mid-20th century, the building itself was in pretty bad shape, with holes in the roof, leaks, birds flying around and stained glass, much like the one that today culminates atop the sanctuary, falling out of the windows.

The local congregation, which kept shrinking, abandoned the main ornate space and prayed in a smaller space downstairs.

“The sanctuary was in a way re-discovered in the 1970s by a group of preservationists who were chronicling many Jewish sites on the Lower East Side,” Dowell said. “That rediscovery kicked off a campaign to bring awareness to this building and then eventually it started the Eldridge Street Project, a $20 million project that took 20 years.”

Finally in 2007, the building was rededicated. It now houses a museum and cultural site that aims to maintain the memory of the Jewish community’s history in the neighborhood. 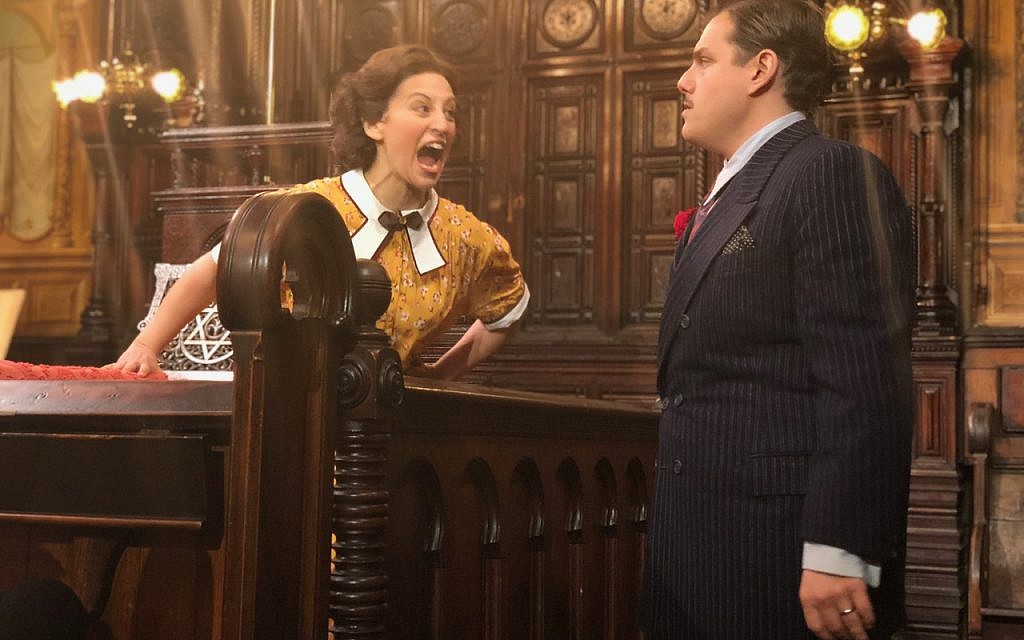 “Neighborhoods in New York don’t stay vacant for long,” Dowell said with a smile. “If one cultural group leaves, another one just takes their place and that’s really what happened.”

“Chinatown, even in 1887 would have existed but a little bit further west than our building and over time, as the Jewish population moved on and went in many cases to Brooklyn, and left some of that space vacant, the flourishing Chinese community continued to expand their own borders,” she added. “Now we find the synagogue in the middle of the Chinese neighborhood.”

A buffet of traditions

The Museum at Eldridge Street is truly an illustration of the cultural melting pot that is New York: a juxtaposition of cultures completely separate from one another, yet living in seemingly perfect harmony.

After they were approached by On Site Opera, the team at Eldridge street almost immediately agreed to host the production.

“It’s so connected to the stories that we tell at the museum every single day,” Dowell said. 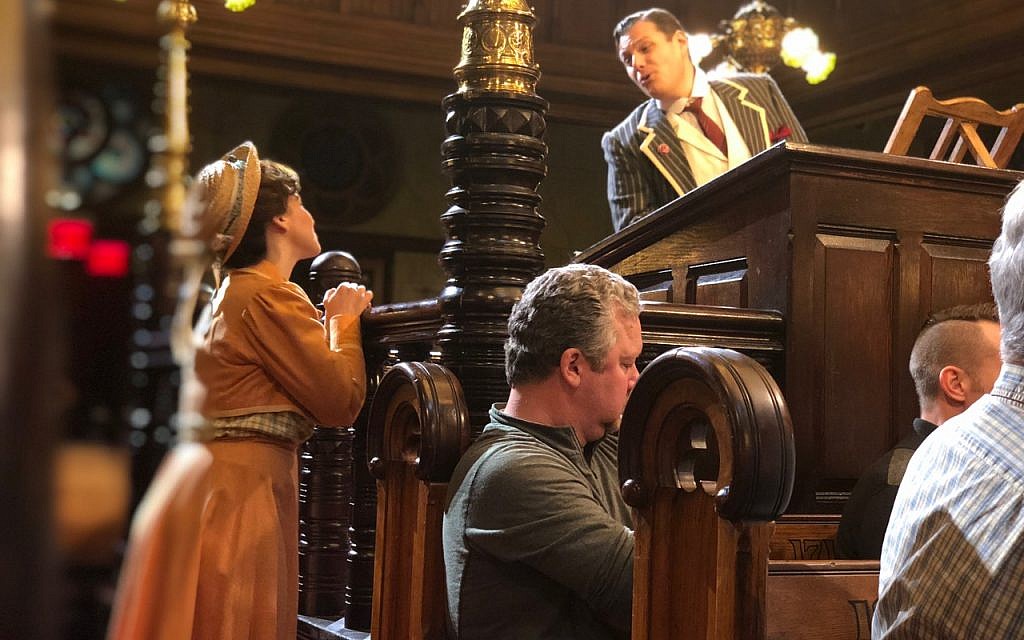 “There is something really visceral for performers and audiences to be able to produce a piece in a real space,” Einhorn said. “You are not performing on a set that somebody built and painted but you are sitting in real architecture. The audience is looking at a space that is real, that is there before and after you are there.”

There is no question that for at least two hours on Tuesday night, the Eldridge Street Synagogue came alive in a unique way. It was as if by stepping into the room, the public had stepped back in time to witness how these American Jews once lived. Some even shed a tear or two, watching scenes of a Jewish family’s life that could have easily reminded them of their own.

But to offer this kind of immersive opera experience in an existing, meaningful space comes with many challenges, Einhorn said.

Even before rehearsals began, On Site Opera must vet potential locations, from acoustics to lighting and movement options. 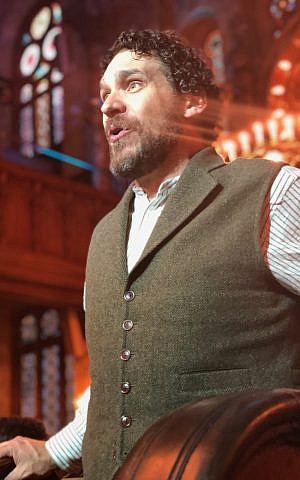 An actor from the opera ‘Morning Star’ at the Eldridge Street Synagogue on Tuesday, March 22, 2018. (Danielle Ziri/Times of Israel)

“We try to troubleshoot as much as possible ahead of time,” Einhorn said. “But there are things you are not going to come up against until you are actually rehearsing in the space.”

“I find that it’s more collaborative than a traditional environment,” he continued. “Everyone has got to really pitch in and help figure things out. You really have to check your ego at the door.”

As people walked out of the synagogue into the Chinatown street under sporadic raindrops that would later turn into a full shower, they stopped to congratulate the orchestra, still wrapping up their instruments with big smiles on their faces.

“Morning Star,” booked for only four performances, will hold its last on Sunday, which marks the anniversary of the Triangle Shirtwaist fire.

“The piece itself is about strength, memory, perseverance and dealing with tragedy and how we all come through from that and I think it’s an especially timely message right now,” said Einhorn.

“I just hope people can take some strength away and their own slice of hope from this incredible story,” he said.