Whipping winds of up to 80 kilometers per hour (50 miles per hour) were felt across Israel on Wednesday, sending seven-meter (23-foot) high walls of water in from the sea and creating the perfect conditions for the day’s Storm Rider competition.

Over 40 elite wind and kite surfers gathered bright and early at Haifa’s Bat Galim beach to take on this winter’s most epic storm in the country’s only big-wave competition and to do what they do best: rip waves, go fast and catch air.

Storms like Wednesday’s are not only rare but finicky, with conditions changing from minute-to-minute. As such, the contest’s organizers — brothers Arnon Dagan and Ori Dagan, both of whom also competed in the event — were left hanging until the last moment.

They didn’t fear bad weather — in fact, just the opposite. Unlike classic wind and kitesurf competitions, which rely on dependable winds and clean waves, the freeriding Storm Rider competition was all about endurance, survival and grit. 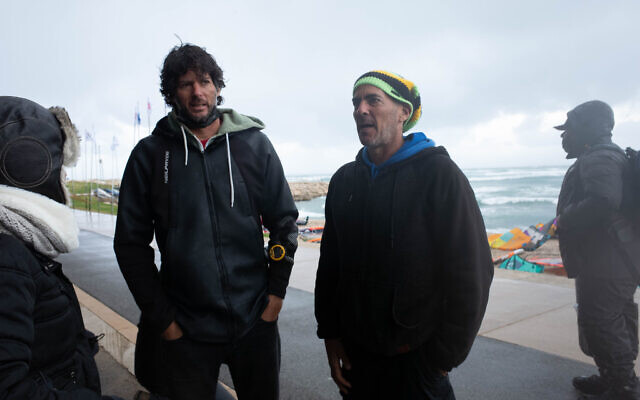 During the competition, up to four surfers had 15-minute heats to put on their best performance. While they competed against others, they also battled the constantly fluctuating conditions: heavy rain, intense winds, and unruly waves.

They were judged on their daring jumps, wild flips and spins, and maneuvers on the face of the towering waves. Each wave and trick was scored on a 10-point scale, and all were tallied together in the end, with the highest-scoring contestants sent to the following heat. 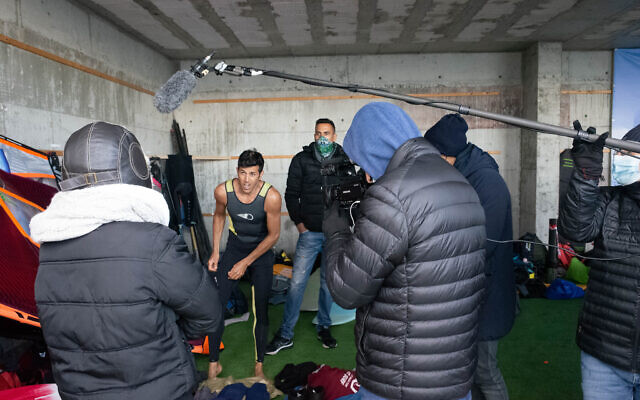 But getting out to sea proved to be an ordeal on its own. Kites flew wildly as onlookers raced to keep them away from the hundreds of spectators perched on the beach.

Once in the water, falls were early and often, with strong gusts sending kites tail-diving straight into the water. The winds and currents pushed competitors far away from their starting points, and the frigid waters mixed with windchill were unforgiving.

“It was pure survival,” exclaimed organizer Ori Dagan after his heat. “At the beginning, there was so much wind that I was barely holding on. But I just love this sport, to be in the water with friends, challenging myself while confronting fears and growing from them.” 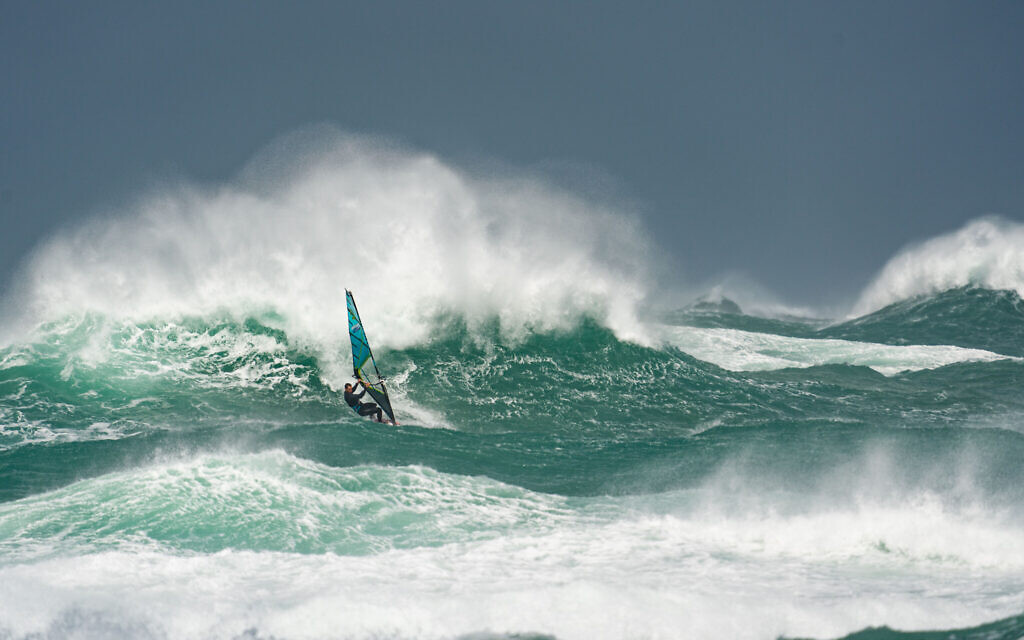 Tzuberi, who took home the bronze medal in windsurfing in the 2008 Beijing Olympics and who made it to the competition finals, was pumped for the day’s events.

“We were preparing for the biggest storm of the winter, and we got it,” he said. “While the Mediterranean Sea is not known for big waves, in Israel today is as big as it gets.” 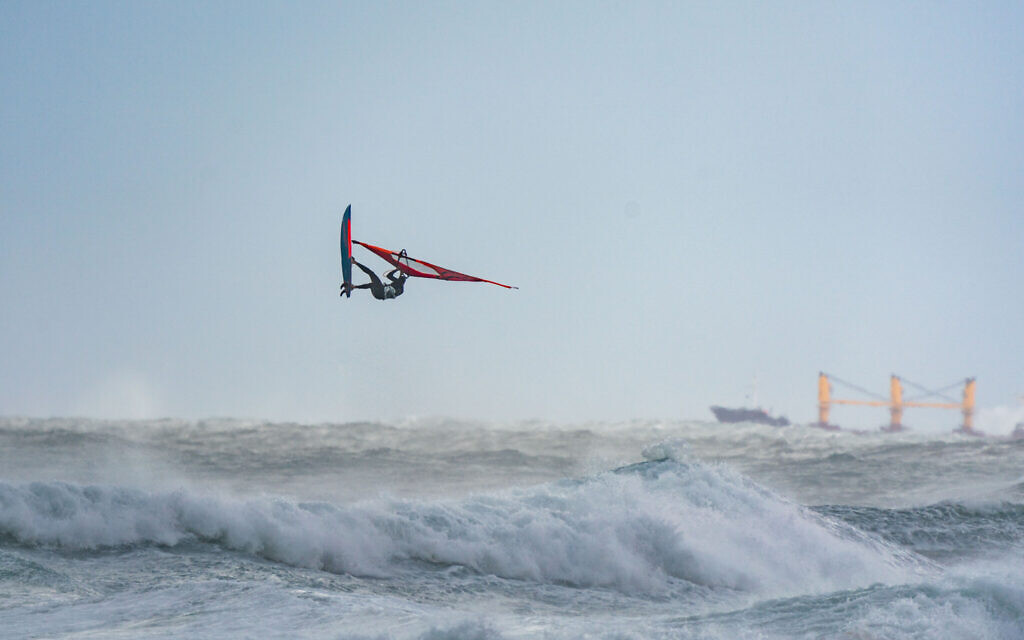 Tzuberi was also impressed by the level of competition he faced. “I’m a world-level windsurfer, but for Olympic windsurfing. Today is a bit different: it’s wild and extreme, with waves and jumps. I do this for fun, but I’m not the best at it. Here, there are really top windsurfers, even compared to all over the world.” 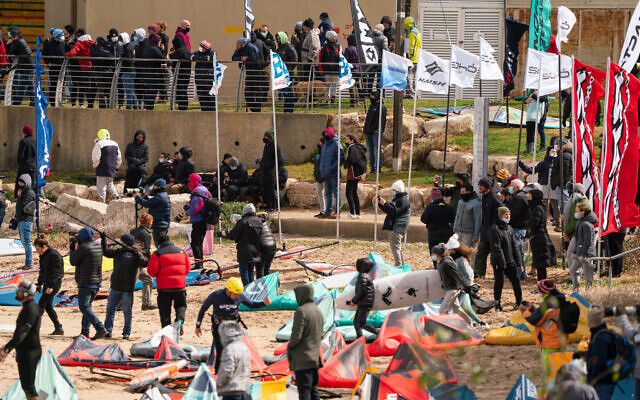 Spectators at the staging grounds of the extreme Storm Riders competition in Haifa, Wednesday, February 17, 2021. (Photo by Uri Magnus/ www.urimagnus.com)

“As there’s a high risk of injury, I wasn’t allowed to compete in this event while I was a professional,” he said. “But since retiring, now is the opportunity to do this.”

Despite the dangers, Mashiah had faith in his ability and that of others. 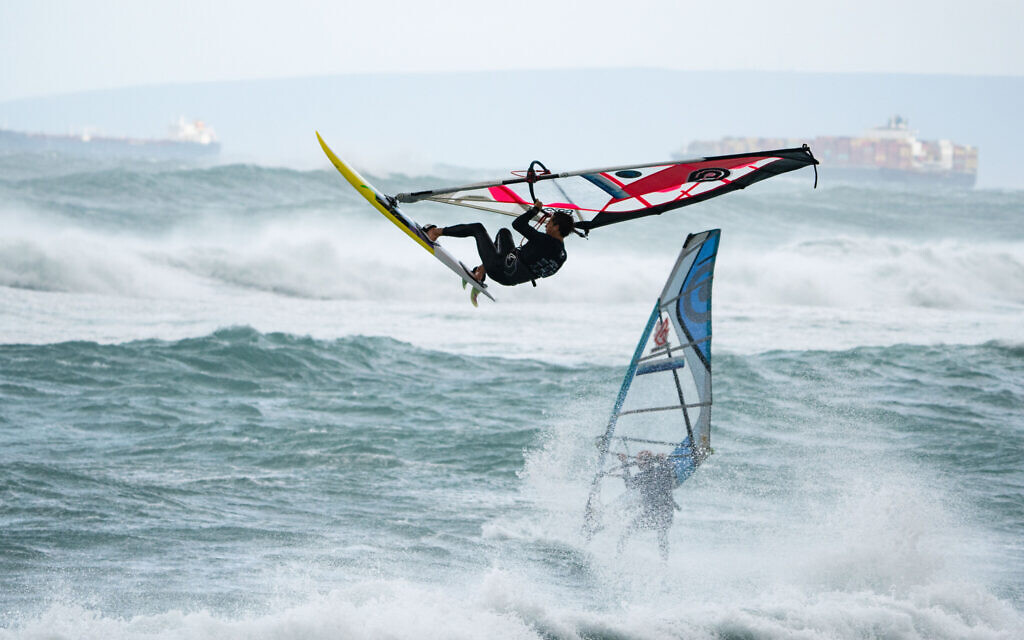 “Today was all about risk management. The potential for injury is high, but in the end, we are all very good swimmers,” Mashiah said.

“Still,” Mashiah said, “as the conditions are unstable, if you just go for it, you may be in for some uneasy moments. With strong winds which are impossible to control, you can find yourself in the middle of the sea, with a sudden drop in wind, and in front of a big six-meter [20-foot] wave. Then you’re hopeless.” 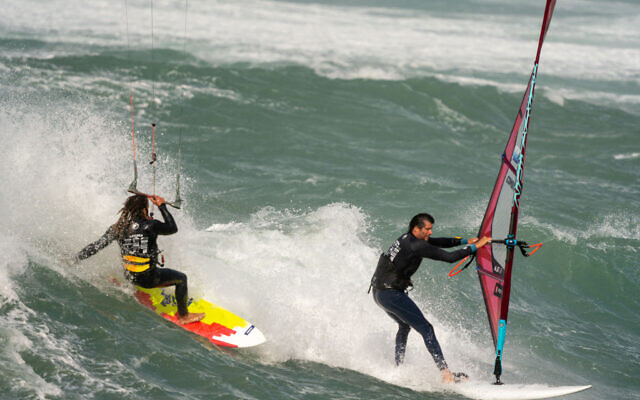 The Storm Rider competition was first hosted in 2002, when the Dagan brothers collaborated with Red Bull Israel to bring the event to life, inviting PWA world champions such as Josh Angulo from abroad to compete. Red Bull ended up replicating the event, now known as the Red Bull Storm Chase, across the world.

While Storm Rider ran for 11 consecutive years, as the event grew larger and more popular, it struggled to collaborate with local authorities in finding common ways to co-promote it, leading to an eight-year hiatus. This year, however, the city of Haifa reached out to the Dagan brothers to ensure it would take place, pandemic and all. 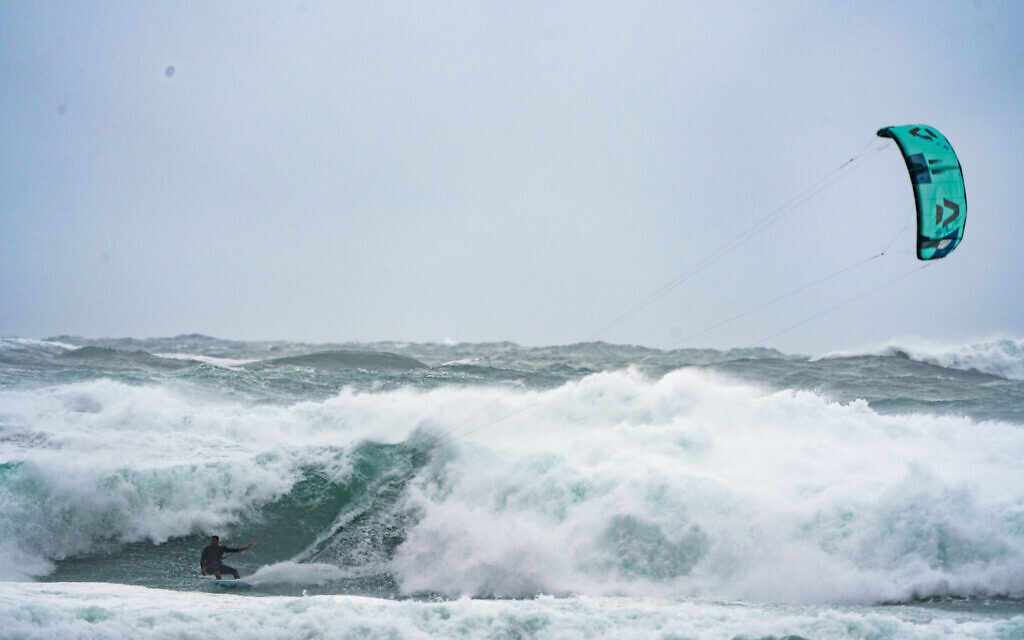 “It was extremely important for the Haifa municipality to co-sponsor the competition,” said Erez Levanon of Ocean Nation, one of Israel’s top water sports gear suppliers and a corporate sponsor of the competition. “The new mayor [Einat Kalisch-Rotem] is big on water sports, alongside her deputy mayor [Nachshon Tzuk], who is ex-navy and a competent waterman himself. They’ve already built two local clubs, have plans for an additional sailing school, and even created a new municipal authority, the Reshut HaYam [Ministry of the Sea], the first of its kind in Israel, with employees dedicated to supporting events like this.”

Levanon also spoke to the rising interest in Israeli watersports. 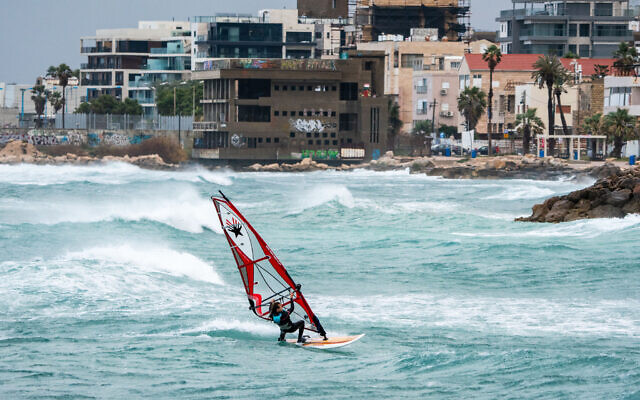 “Once upon a time, surfing was considered very niche, and wind and kitesurfing even more so, popular only in small, tight-knit communities. But over the last half-decade they’ve exploded, with COVID giving them a massive boost. On any given day where even the smallest of waves are expected, you’ll see masses of people in Tel Aviv — coming by car, bike and foot — with surfboards in tow. It’s all a step in the right direction,” he said.

As the event took place on the heels of the third COVID-19 lockdown, police tightly patrolled the premises, working to separate and disperse hundreds of live spectators while blockading the competitors’ area. At moments, organizers feared that the authorities would shut down the competition due to COVID-19 public health protocols. In the end, the games continued. For those uncomfortable with or unable to attend in person, the entire event was streamed on Facebook Live, with thousands viewing and chiming in by chat to cheer on competitors. 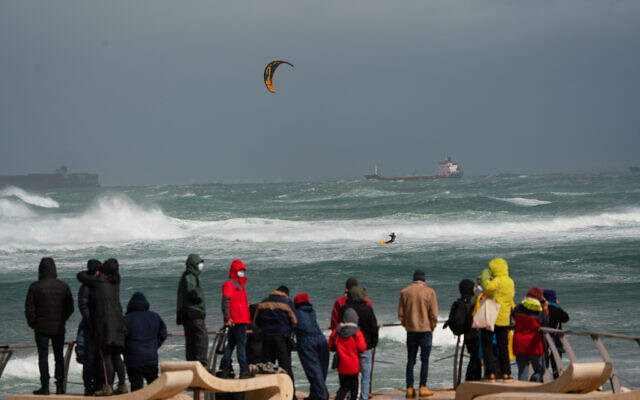 For Ori Dagan, the opportunity to leave the comfort of home and bask in the storm made all the difference.

“I think fresh air is good during COVID,” he said. “People should go outside, breathe without masks, especially during crazy weather like today. You just feel more alive.”

He also took the opportunity to make a suggestion: “People who have never tried to go outside of their comfort zone — with surfing, wind or kitesurfing — go do it. You’ll challenge yourself and feel happier.”

“Just maybe don’t do it today,” he was quick to add. “If you’re just a beginner, you’ll probably know that by instinct.” 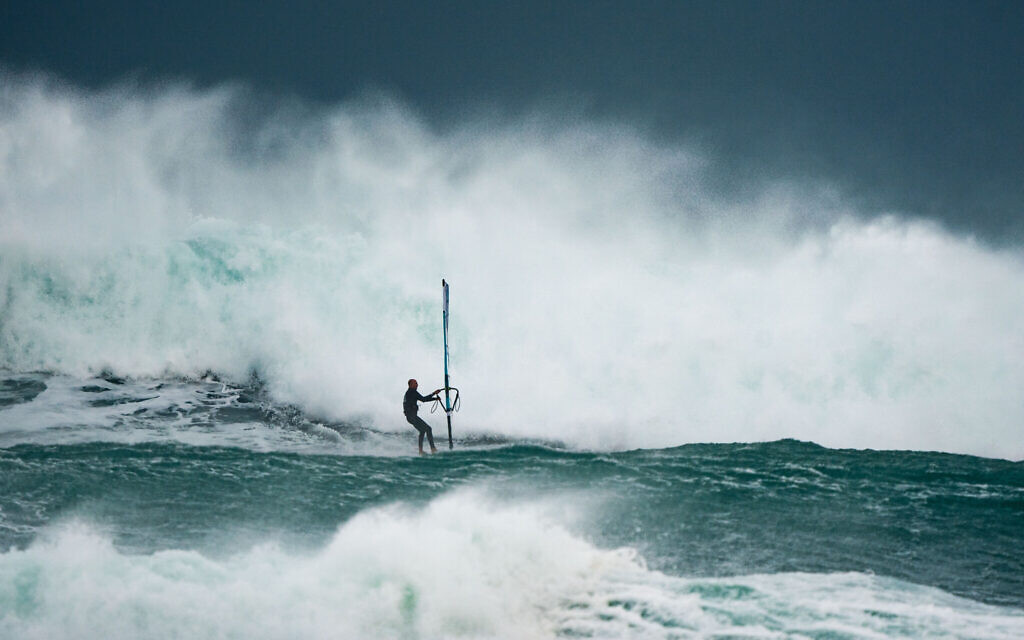 Mashiah also felt that COVID-19 had a special place in this year’s competition.

“COVID gave us two opportunities: to give up on life, or to go for it like never before. Here, we’re making a statement: we’re not lying down and waiting for something to happen — we’re going for it, we’re creating our own reality, even in the craziest climate, both weather and COVID. This competition is even more righteous to do during this moment in history,” he said.

As the only competition of its kind in Israel, and as big wave events continue to grow globally, Storm Rider has proudly returned to stake Israel’s place on the worldwide extreme sport scene.

“Bat Galim may not be Nazare [Portugal] or Jaws [Hawaii’s Peahi beach],” Mashiah said. “But Israelis who are used to surfing those places have brought their energy and knowledge back home. Our generation has been inspired by them.”