Dr. Alla Shapiro was in Kiev when the explosions at the No. 4 reactor at the Chernobyl Nuclear Power Plant near Pripyat, Ukraine, occurred 35 years ago April 26. The medical first responder was immediately called into action and as a young pediatrician and hematologist, she was charged with examining and treating hundreds of children streaming into her hospital with their panicked parents. It was the worst nuclear accident in history.

Up to 30 percent of Chernobyl’s 190 metric tons of uranium was released into the atmosphere. Ukraine and neighboring Belarus were the most affected, but radiation contamination was also detected in other parts of the Soviet Union and throughout northern Europe. The Soviet government eventually evacuated 335,000 people, establishing a 30 kilometer (19 mile) “exclusion zone” around the reactor. It is estimated that the area will remain uninhabitable for tens of thousands of years.

Shapiro was eventually dispatched to clinics in other locations in Ukraine affected by the disaster. She did all this without any training on how to treat radiation exposure, or any protective clothing to wear.

Worse yet, authorities prohibited Shapiro and her colleagues from seeking guidance from medical books and journals. All materials containing the word “radiation” were pulled from the shelves of Kiev’s main medical library. The government, which had imposed a 10-day media blackout on the disaster, maintained that less knowledge would lead to less panic. Any physician daring to challenge this approach was threatened with permanent job loss. 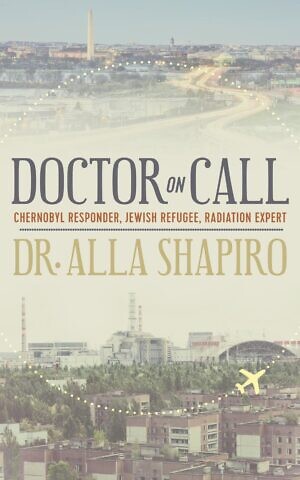 In a recent interview, Shapiro told The Times of Israel that she learned firsthand “that not telling the truth and not sharing the scientific information with the doctors and the public could lead to dangerous and sometimes deadly consequences.”

Shapiro chronicles her experiences in the immediate aftermath of Chernobyl in her new memoir, “Doctor on Call: Chernobyl Responder, Jewish Refugee, Radiation Expert,” published on April 27.

The title also refers to Shapiro’s emigration with her family from the USSR to the United States in 1989, and her subsequent 20-year career in developing medical countermeasures to radiation exposure at the FDA’s Counter-Terrorism and Emergency Coordination Staff (CTECS). Shapiro hadn’t initially planned a research career, and certainly not one focused on nuclear radiation, but the events of April 26, 1986, changed the course of her life.

She didn’t come through the experience unscathed: A decade ago, Shapiro, 66, was diagnosed with colon cancer, which is believed to have been caused by her radiation exposure in Ukraine. Now in good health and retired since late 2019, she remains as busy as ever working on various research projects and consulting to a pharmaceutical company.

Soon after her retirement, Shapiro, who lives in Bethesda, Maryland, was also tapped by Vanity Fair to analyze scenes from HBO’s “Chernobyl” miniseries, which aired in 2019. The video has been viewed more than 8 million times on YouTube.

The Times of Israel asked Shapiro about the somatic and psychological effects of radiation exposure, advances in medical countermeasures to radiation, and whether she thinks the US is more prepared for a nuclear disaster than it was for the COVID-10 pandemic.

It is good to hear that you are cancer-free a decade after you were diagnosed and treated aggressively for colon cancer. How can you be sure that your cancer can be directly attributed to your radiation exposure in Kiev?

I had a genetic test for colon cancer, and it was negative. So, in my case, the strongest assumption, based on the medical literature and data, is that it was caused by radiation exposure.

There are lots of uncertainties about some cancers, but in the literature there is no doubt that there has been an elevated occurrence of colon cancer.

Four regions in Ukraine that were the most affected by radiation were analyzed for colon, stomach, and other cancers. Kyiv, where I lived, turned out to have the highest rate of colon cancer. 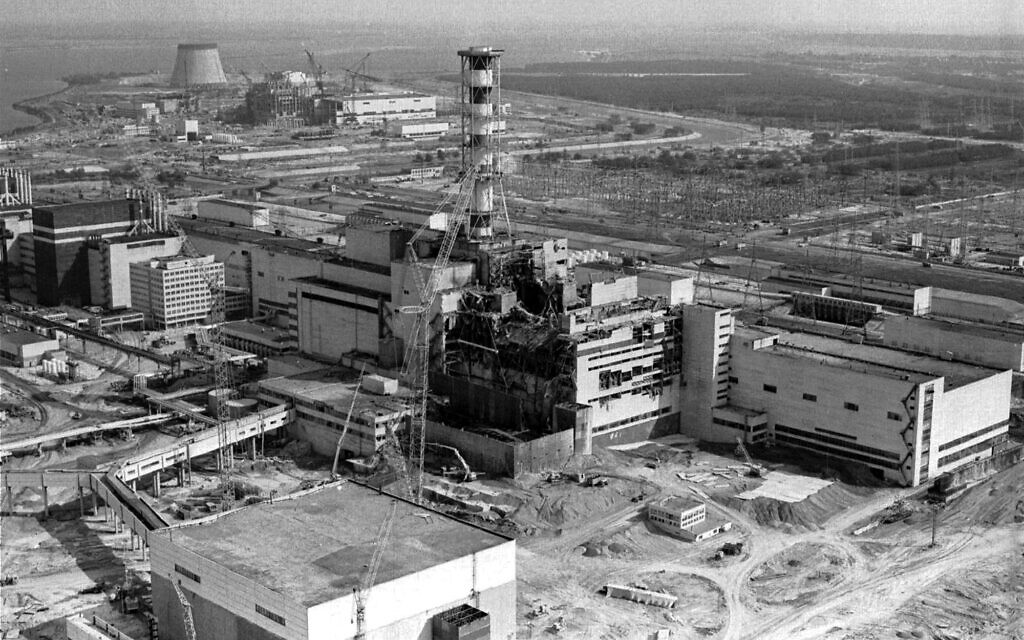 This 1986 aerial view of the Chernobyl nuclear plant in Chernobyl, Ukraine shows damage from an explosion and fire in reactor four on April 26, 1986, that sent large amounts of radioactive material into the atmosphere. The Chernobyl nuclear disaster spewed radiation over much of northern Europe and claimed thousands of lives. (AP Photo/Volodymyr Repik)

What are other somatic effects of radiation exposure from Chernobyl?

In terms of medical consequences, people are still debating some of them. There are explanations for many things, but with many other things we are still in the dark.

Thyroid cancer is statistically dramatically increased in women, and especially in children. It is one of the most common late effects of radiation. There is an explanation to that. This is not debatable.

There is no consensus on whether children who were in utero at the time [of the radiation exposure] had IQ differences by age 7-10. There is also no consensus on leukemia in children, but there is consensus on higher rates of leukemia — as well as breast cancer — in liquidators [people brought in from around the Soviet Union to clear up after the disaster].

We have also seen increased rates of urinary/bladder cancer, especially in men, among people who lived in Kiev. 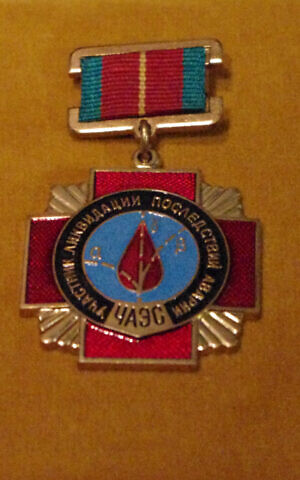 Medal awarded to the liquidators who sanitized the area surrounding the nuclear reactor following the Chernobyl disaster in 1986. The central design has a drop of blood through the radiation signs of alpha, beta and gamma. (Staffan Vilcans, Public domain, via Wikimedia Commons)

Did these cancers show up right away, or only later?

In the first few years nothing was pronounced except that after 6-8 years thyroid cancer started increasing. This was the first cancer that dramatically went up. It peaked and plateaued about 15 years after the disaster. The latest data is from 2017, and it is still high.

Was any attention paid to the psychological impact of the disaster?

The mental impact wasn’t taken as seriously from the beginning… Post Traumatic Stress Disorder (PTSD) did not get any attention for years and years. The first time I heard about it was in 2005 when the World Health Organization (WHO) had a big meeting and it was said that the Chernobyl disaster unleashed the worst PTSD ever, and that the long-term effects could last forever. People started paying attention to this very, very late. Suspicion was growing over the years, but the first official data was in 2005.

Israel is a very reliable source of data on this. Lots of people immigrated to Israel after Chernobyl. Those willing to participate in studies were put in different groups based on the regions they came from, and they were screened for PTSD, anxiety and depression. 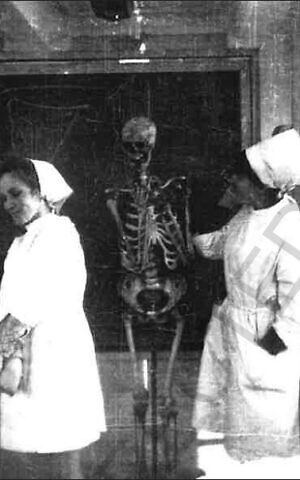 Alla Shapiro (left) in her first year of medical school in Kiev, 1971. (Courtesy)

You and your colleagues were not trained to treat radiation exposure when Chernobyl happened. Were American doctors better prepared at the time?

Unfortunately in the US it was the same grim situation with knowledge, training and education. Even now I am amazed when I communicate with doctors from emergency rooms. It is not even in the back on their mind that such-and-such symptoms could be caused by radiation.

What are the kinds of nuclear radiation threats that people in the US and other countries face?

The radiation that comes from a nuclear power station or a terrorist’s dirty bomb, causes mainly panic or physical damage, and not so much radiation.

But the main scenario those of us working in the US government have been focused on is that of a 10-kiloton nuclear bomb exploding in one of the largest cities in America. In this case, radiation comes as acute and high-dose in a short period of time.

How prepared is the US to deal with such a situation?

We are doing much better than 30 years ago. We have much more understanding what needs to be done. We conduct regular tabletop exercises… The group that I was a part of develops medical countermeasures that go to the Strategic National Stockpile (SNS). We have plenty of supply of potassium iodide (KI) (to protect the thyroid gland against radiation) and other drugs, and protocols available to everybody.

I would not recommend that a person go online and get KI. This should all be directed by scientists and doctors. Information should not be coming from politicians. If something has to be done, the directions will be coming from medical personnel. 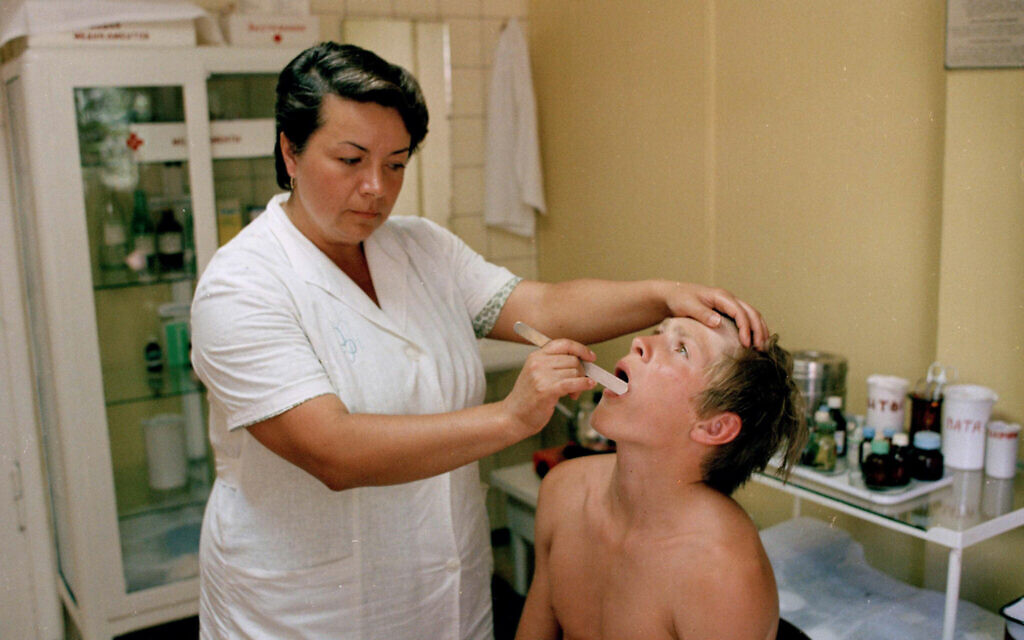 A young boy undergoes a medical examination at the Artek Pioneer Camp, June 14, 1986. He is one of 110 children evacuated from near the Chernobyl nuclear power plant to spend the summer at Artek. (AP Photo)

How many radiation countermeasure drugs are in the SNS?

We have seven drugs that are approved by the FDA in our SNS. There is KI to protect the thyroid. Another is Leukine, which comes from the oncology world. Drugs approved in the past for neutropenia caused by cancer and chemotherapy are now in the SNS and would be used in patients with low blood cell counts with Acute Radiation Syndrome (ARS). Lots of other drugs are under development, such as Genistein (which I discuss in my book) has not been approved, but it is in phase 2 of development to be approved for ARS. Doses of this drug are being used in trials with patients receiving radiation treatment for lung cancer to protect healthy tissues.

Based on what we have seen in terms of the politicization of the response to the COVID-19 pandemic in the US, do you fear the same could happen in a nuclear disaster?

We knew nothing about this virus, so everything that was evolving was new to us. This is not the case with radiation, which we are familiar with. We have data on [the nuclear explosions at] Hiroshima, Chernobyl and Fukushima. We just have to be very organized and put response systems in place.

With Covid, people have different opinions and are trying to push different studies, sometimes without waiting for results and analysis. The media is also problematic, picking up stories as we go and not waiting until we have true information.