Kochava Levy didn’t think she would live to see the morning of March 6, 1975.

Taken hostage by Fatah-aligned terrorists inside the Savoy Hotel in Tel Aviv, Levy was convinced that she would never see her daughter again. “It is clear to me that I will die here tonight in this shabby hotel,” she wrote in her diary.

Levy, a 31-year-old housewife and mother, found herself the unlikely mediator between the terrorists and the IDF team of negotiators stationed outside the hotel.

Using her knowledge of Arabic, Levy relayed messages between the two sides and appealed to the terrorists to release a wounded hostage.

But her heroic role was overshadowed following the attack when Levy – who had been staying in the hotel with a man who was not her husband – was mislabeled by the media as a prostitute. Her heroism and bravery that night was largely forgotten – until now.

The story of Levy’s role in the 1975 terrorist attack at the Savoy Hotel – which resulted in the deaths of eight civilians, three IDF soldiers and seven out of the eight terrorists – comes to life in a new hybrid documentary, “Savoy,” from filmmaker Zohar Wagner.

The movie, which premiered at the Jerusalem Film Festival last month and hits Lev cinemas across Israel this week, intertwines documentary footage, recordings and images from the night of the attack with dramatizations of the scenes inside the hotel. Veteran actress Dana Ivgy (“Zero Motivation,” “Aviva, My Love”) plays Levy, while Ala Dakaa (“Fauda,” “Mossad 101”) portrays the head of the Palestinian terrorist cell.

Actress Dana Ivgy in a scene from the new documentary ‘Savoy.’ (Moshe Mishali)

Wagner – whose most recent film, “21 Days Inside,” tells the story of a Bedouin woman accused of murdering her son – used Levy’s diaries alongside archival records to piece together the events that occurred inside the hotel over the course of about five hours, brought to life by Ivgy and Dakaa.

“I wanted to focus on Kochava, and there was no footage of her from that night, because… the hostages were inside a closed hotel,” Wagner told The Times of Israel in a recent phone interview. “All the media coverage was from around the building.”

Wagner recalled asking herself: “How am I going to talk about this very unique woman, how am I going to show her brilliance?” She said she decided early on in the filmmaking process that she would include dramatic recreations based on Levy’s diary entries in order to tell her story. 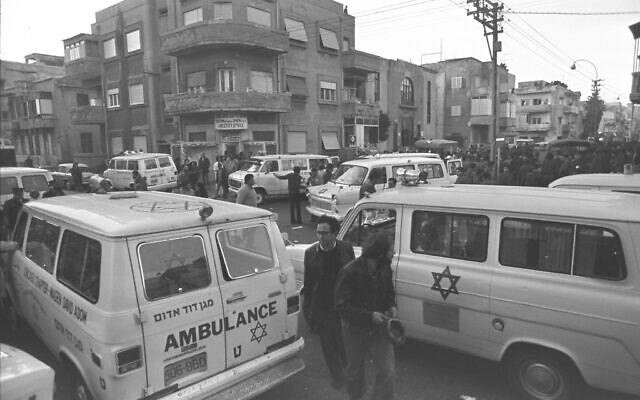 Ambulances standing by the Savoy Hotel in the early morning of March 6, 1975, during a terrorist siege of the hotel. (Ya’acov Sa’ar/GPO)

“My daughter must be asleep by now,” she wrote. “And my husband is sitting in the next room listening to the radio. They must have already announced the terrorist attack. Would he even imagine that I am here? What will I tell him tomorrow? Will there be a tomorrow?”

The dramatic reenactments and the archival footage are complemented by audio recordings from the night of the attack, captured on tape by a recording enthusiast who was behind the hotel during the incident. Pieced together, they paint a picture of a young woman who attempted to save lives by connecting to her kidnappers on a human level.

“You have this woman, in this situation, and you see how women can use language, they can use compassion, they use their intelligence to solve situations,” Wagner said. “For me it’s about using language, about reaching the enemy’s heart, about using words instead of guns. And maybe women can do all these things better than men.”

One of the most dramatic moments – and the only time Levy was caught on film that night – came when she dragged a wounded hostage, Karol Feldman, to the entrance of the hotel so he could be picked up for treatment, saving his life. Feldman’s 13-year-old son, Asher, was among the civilians killed in the incident.

“Help me with your arm so I can save you,” she can be heard saying that night in grainy footage from the darkened hotel lobby as she struggles to move the wounded man twice her size.

“We’re bringing him out, don’t do anything,” she shouts at the gathered IDF team.

Levy convinced the Palestinian hostage takers to allow her to bring the man outside after they refused to do so, fearing they would be shot by IDF snipers. “If he’ll just let me save the wounded man, I will kiss his hand,” she wrote in her diary.

Hours later, the IDF stormed the hotel, and the terrorists responded by setting off explosives, killing most of the hostages left inside the hotel, who were largely foreign tourists. Seven of the eight terrorists were killed, while the remaining man was captured, tried, convicted and ultimately released in a prisoner swap deal in 1985.

Kochava Levi is escorted by IDF soldiers following the terror attack in the Savoy Hotel in March 1975. (IDF Archive)

The film, produced in conjunction with Kan, will air on the public broadcaster at the end of September. Wagner was awarded best director of a documentary for “Savoy” at the Jerusalem Film Festival, which also picked up the prize for best editing.

Levy died in 2019 at the age of 75 of cancer, after living life largely below the radar following the attack. Her daughter, Osnat, and her sister, Aviva, attended the film’s premiere at the Jerusalem Film Festival. Wagner said Levy’s family were initially very hesitant about the movie.

Osnat was “very worried and afraid” about additional public scrutiny, after her mother was “persecuted so much by the media,” Wagner said. “They were really not calm until I showed them the final version.”

Due to a mixup in identification, Levy was labeled a prostitute in the media during her newfound fame after the attack.

Levy sued Time magazine, and won, for referring to her – in an article still available online – as “a petite, black-haired prostitute who had ducked into the Savoy earlier to avoid a police roundup.” Though she ultimately cleared her name, Levy’s bravery was still overshadowed by the fact that she had been in the hotel with a man other than her husband.

In the film, Wagner showcases the sharp disparity in the reactions to Levy’s lover, Avi Azikri, who was shot by the terrorists but survived the attack. In recordings from the night of the attack, Azikri can be heard identifying himself as British, purportedly hoping that foreign hostages would be released. He was later visited in the hospital by then-prime minister Yitzhak Rabin.

For Wagner, the story of Kochava Levy is one of heroism, for using language and humanity to connect with the enemy. But it is also one of misogyny and unfair standards. In a recording of police speaking the day after the attack, an official clears up the misunderstanding about Levy, noting that there is another Kochava Levy in Tel Aviv who was a known prostitute. “But they’re both sluts,” retorted another police officer, to raucous laughter.

Yes, I'll give Yes, I'll give Already a member? Sign in to stop seeing this
read more:
Current Top Stories
See All
Never miss breaking news on Israel
Get notifications to stay updated
You're subscribed