I keep eyes to laptop as Ze’ev slaps me manfully on the shoulder and places his cardboard coffee cup next to mine. I don’t feel like talking, and even if I did, I wouldn’t choose Ze’ev, whose favorite exercise is gaining a foothold in the affairs of others. It was a mistake to expose myself here, in the little café just outside the gym at the Jerusalem International YMCA Sports Center, at a small table right next to the large window overlooking the pool. Out of the corner of my eye I glance at the Jacuzzi a floor below, and wince when I see Veronica seated on the edge, holding Khaled’s hand, saying nothing.

“I hear,” he says, jiggling the table to catch my attention, “that Raya left you.”

I keep my eyes to the computer. But Ze’ev knows no bounds. He reaches over and pushes the screen halfway down. I continue to stare as if it’s still there, typing blindly.

“What’s with the poker face?” he says, reaching over and lifting my chin with a thick finger. “The whole gym knows. It’s the talk of the elliptic machines.”

“She’s gone to spend a few days with her Mom in Ra’anana.”

Ze’ev sips his coffee coolly. “No one endures Ra’anana without a really good reason.” 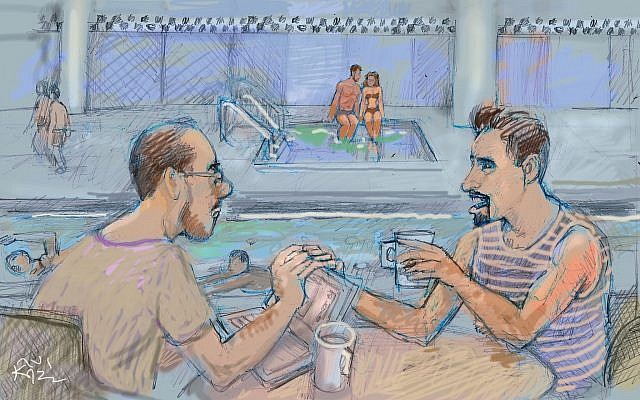 Illustration (above and top) by Avi Katz

“Ze’ev, leave me alone.” I flip the screen up again and stare at it. Ze’ev continues to sip and sit his ground, even though there are three other empty tables and the coffee is to go. I try to focus on my work, but who can work with a telltale at table? I keep trying, and he keeps staying, until he gracefully rises, shoots me a leer, and makes way for Veronica. But he doesn’t leave, he just relocates, not far away.

Veronica has exchanged her bathing suit for green running shorts and yellow Nike training top, her hair up and her skin still rosy from the hot tub. Not yet thirty, she’s a couple years older than her lover Khaled and more than two decades younger than me, which is why the whole thing is absurd, as I knew from the start. She smiles, takes out her smartphone, and points to it.

“Talk to me?” And she’s off for her half hour on the treadmill.

Three months ago I was the one sitting next to Khaled in the Jacuzzi. That is, I was in the Jacuzzi up to my neck, massaging sore joints against the water jets after an hour’s swim, and he was sitting on the edge, with just his feet in the pool, swiping away at his phone. I’ve actually never seen him inside the Jacuzzi, perhaps because if he immersed himself it would hide the lean and muscular torso of which he is inordinately proud. In his place, I would be, too. Even when I was his age I didn’t look anywhere near as good. I’m just stepping out when he turns to me.

“Hey, can you give me some help here?” He points to the phone. I squint and see he’s in WhatsApp.

“I need you to chat with this girl for me.”

He tells me that Veronica, from Trieste, stayed at the YMCA hotel last week and they met at the pool. And that she’s got the most amazing body and that they got talking some, although her English is a lot better than his. And he thinks she really likes him but now she’s gone back to her home on the Adriatic and he misses her. And he’s trying to convince her on WhatsApp to come back, that he’s worth making another trip for, he’d go to Trieste himself but his Mom’s a widow and his sisters are all married and he can’t leave her alone. So Veronica has to come back to Jerusalem.

I know who he means. But I’d known better than to say a word to her.

“You know, you can use Google Translate in WhatsApp.”

He waves his hand to dismiss the idea. “It’s got to be beautiful. The English, I mean. To convince her.” And he hands me his phone. “If you have a minute.”

“Ok, a couple minutes,” I say, sitting down next to him. “What should I write?”

“Write ‘Veronica, the light of my life, here is Khaled.” He raises his eyes heavenward as I write “Hey, Veronica, this is Khaled.”

“Now take a selfie of me.” He puffs out his chest and I snap.

“I dream of you every night. Your beautiful face haunts my dreams.” I stare at him and turn to the phone. “We had such a wonderful talk,” I write.

“Your hair is as soft as a puppy’s, your eyes are points of light in my darkest hours.”

I think a few seconds and write: “But there’s so much we didn’t get to say.”

After I press the send arrow there’s a pinging sound and a smiling face appears on the screen. Khaled takes a big breath and exclaims: “She answered!”

“I cannot wait, I must see you, I must once again brush my hand against your ivory shoulder!” He pauses. “Is that good? Does it sound like poetry? Make it sound better.”

“Anatomy is not destiny,” I tap out. “It’s probably even boring.”

A laughing emoticon appears on the screen. Khaled looks worried. “Was it funny, what I said?”

“It just means you have her attention.”

“I am down on my knees, I beg you to return. I am in love and I will die without you!”

I type: “Is there any chance you might swing through Jerusalem again soon? It would be so great to see you.”

Khaled looks worried. “Maybe she won’t believe me. Maybe I need to make it stronger.”

But there’s already a reply on the screen.

“You are so nice,” Veronica writes. “As I told you, I came last week just to make arrangements for a summer research position and I will be back next month.”

“She’s coming back next month,” I tell Khaled. His eyes widen and he hugs me.

“You’re a magician!” he chortles. “A real magician!”

Khaled wouldn’t leave me alone after that. Every day, after my swim, I had to take another fifteen minutes to serve as his voice in his courtship of Veronica. As her return approached, my hopeless infatuation intensified and his passion for her grew. He told me that he was going to use his last penny to buy a real Italian suit and wear it when he went to greet her at the airport.

I didn’t see him the next day, but the day after that I see him sitting with his feet in the Jacuzzi, looking glum.

“What happened? Wasn’t she happy to see you?”

“She was,” he says, “at first. Until I started talking and telling her about my feelings.”

“She looked at me like I was from outer space and told me to stop it. But I couldn’t. And then she said that I’m not the man she thought I was, the one who sent her such nice messages on WhatsApp.”

He looks at me accusingly. “What did you write?”

“I just, well, translated what you said into, you know, what I thought would work.”

And just at that moment Veronica emerges from the pool — like a goddess, Khaled says under his breath — and comes over.

“This is him,” Khaled tells her. She sits down between us.

She eyes me from head to foot and then surveys Khaled’s body.

“Perhaps,” she says to the two of us, “the right words come with maturity.”

I glance at her glumly. “That’s what my wife says.”

“Please,” Khaled says, taking her hand. He slips into the tub and kneels before her on the shelf below. “Be with me. Be mine.”

Veronica smiles, and nods in my direction. “But can I still chat with him?” Khaled hesitates, gives me a suppliant look, and nods.

And so it has been since. Veronica swims with Khaled, sits in the Jacuzzi with Khaled, probably has sex with him twice a day. And she and I have a long WhatsApp chat every day. She tells me about her research project at Hadassah hospital, and about her family back home. We talk about Game of Thrones. I tell her about the book I’m writing and complain about where my country is going. And then I go home to Raya and repeat the conversation with her. Once or twice a week we make love.

It was inevitable. She picked up my phone instead of hers by mistake and saw the long string of exchanges with Veronica. I showed her the selfie I’d taken of Khaled at the start of it all, to prove that she had nothing to worry about, that there was no competition. “We just chat,” I say to her. “That’s all.”

I know what I need to do. Flesh burns, but words endure. I eye Ze’ev warily as I open a tab with WhatsApp Web.

A plaintive emoticon appears on my screen.

“It’s just not going to work,” I write. “I must chat monogamously.”

“Please,” Veronica writes. “A little longer. Until Khaled gets the hang of it.”

I feel Ze’ev’s hand on my shoulder. “Is that the girl, the one who was here? Hey, Raya’s loss and your gain!”

“I love you,” I type, to Raya. After a moment, she replies in kind.

I closed up my laptop and slipped it into my backpack. “I have to go. Raya’s going to be home soon.”

Ze’ev waves his hand to dismiss the idea. “Raya? When you can get in bed with that Italian beauty?”