Amanda Borschel-Dan is The Times of Israel's Jewish World and Archaeology editor.

A giant of a man may have sprouted from an equally giant-sized city. Super-sized remains of “enormous” architecture and fortifications from a new, unexpected “biblical-era” layer of the Philistine city of Gath were unearthed this summer at the ongoing Tell es-Safi/Gath Archaeological Project.

Whereas most of the site’s previously excavated areas date to the 10th and 9th centuries BCE, this new layer dates to the 11th century, when, according to the biblical narrative in Samuel I 17, the future King David slew the giant Goliath.

“For those scholars that accept that David was a historical figure — and I’m among them — the late 11th-, early 10th century BCE, the time of the earlier phase of the city of Gath, whose impressive remains were just found, is the time frame in which David existed,” Bar-Ilan University Prof. Aren Maeir, the 23-year excavation director of the Tell es-Safi/Gath dig, told The Times of Israel. The dating follows the chronology of the Kings of Israel and Judah as presented in the Bible.

“If in fact David did confront an opponent in single combat, most often identified as Goliath, this would, more or less, be the time of this early Iron Age phase of the city of Gath,” said Maeir. He emphasized that “it is hard to say whether or not there is a historical kernel to the story, and if there is in fact a kernel, what this kernel was.”

There is still no inscription conclusively stating that “this is Gath,” however the previous two decades of excavation at Tell es-Safi/Gath have uncovered a massive Iron Age Philistine site that served as the region’s center of gravity in the 9th and 10th centuries, said Maeir. The settlement was destroyed by the Aramean King Hazael around 830 BCE, which is echoed in the account of Gath that is written in Kings II 12:18. 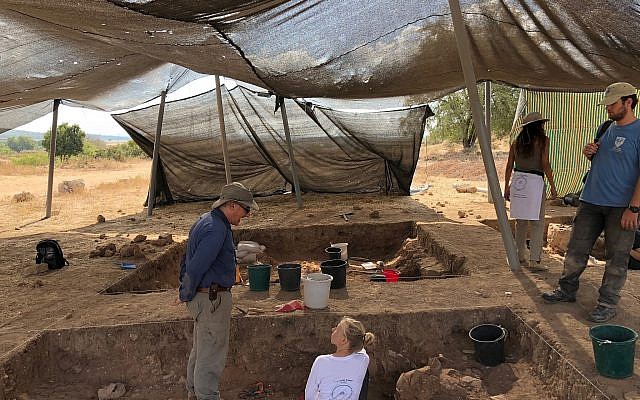 For years, said Maeir, he and his team had assumed that the Hazael destruction layer was the largest phase of ancient Gath. “But I kept having this niggling feeling. It was bothering me: If the city destroyed by Hazael was so important, why didn’t it have fortifications? There were some, but nothing to write home about,” said Maeir. 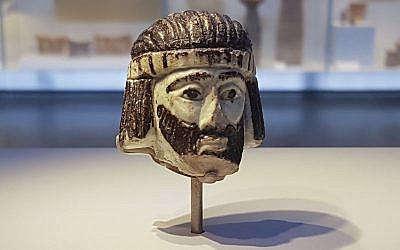 King Hazael? A detailed figurine of a king’s head on display at the Israel Museum, dating to biblical times, and found near Israel’s northern border with Lebanon, in Jerusalem. (AP Photo/Ilan Ben Zion)

Digging a little deeper this year, the team found impressive remains that predate the settlement destroyed by Hazael in 830 BCE, as first reported in Haaretz.

While beginning excavation at the 11th century site, “We got the feeling that perhaps this earlier phase is larger and dramatically more impressive than the city that was destroyed by Hazael,” he said. “It’s a surprise, but on the other hand — it explains something… The pieces fit together now much better.” 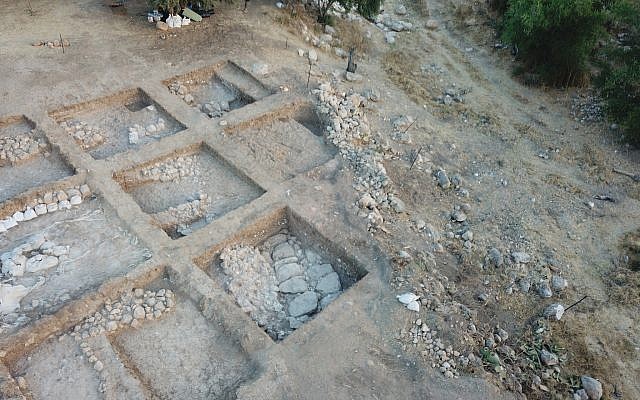 The monumental architecture is of much larger dimensions than almost anything found in the Levant during this era, said Maeir. This unexpected layer opens up the possibility that the city was a regional stronghold by the 11th century, said Maeir, as opposed to the previously assumed settlement of Ekron. As such, the find could cause a rethink of the “matrix of who were the strong powers in the region at the time,” he said.

The uncovered fortifications discovered in the lower city are 4 meters (13 feet) wide, versus the 2-2.5 meter (6.5-8 foot) wide walls discovered from later periods. Likewise, the dimensions of the building material itself are dramatically different. In later layers at the site, said Maeir, the ancient architects used half-meter-long (1.6 foot) stones. In the “Goliath layer,” the blocks measure between one and two meters (roughly 3.2-6.5 feet).

The 11th century city was outstandingly large and would have covered an area of 500 dunams (123.5 acres) — more than twice the area of most comparable cities in the Levant, said Maeir. For point of reference, when ancient Jerusalem was at its height a few hundred years later, it would have reached 400-500 dunams, he said.

“In geographical terms, Gath was a ‘primate city’ and on a larger and different scale than others,” said Maeir, comparing it to the difference between New York City versus Indianapolis. 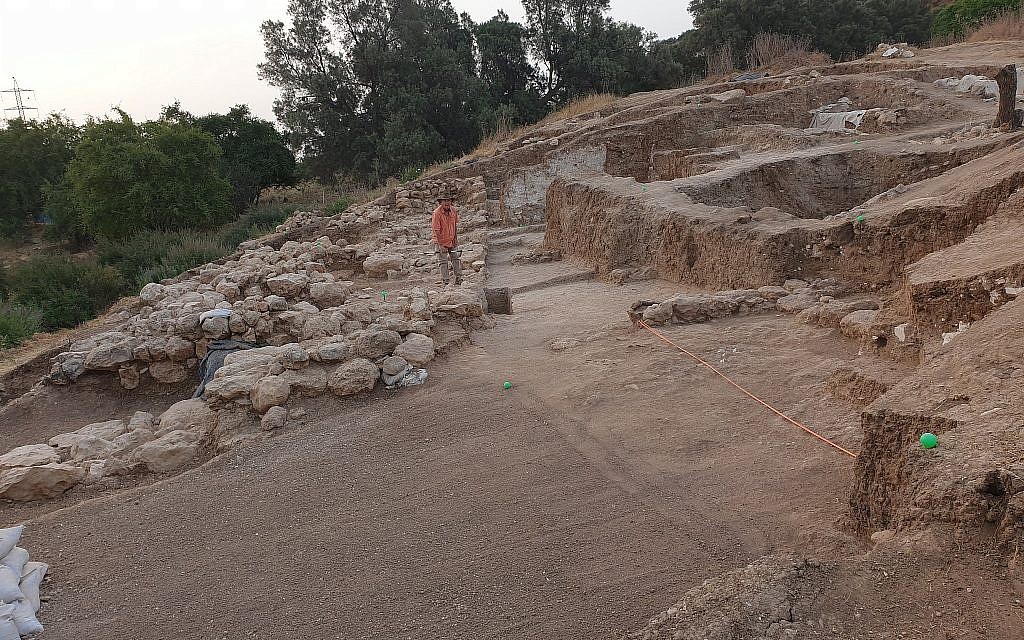 Echoes of an Aegean origin?

A recent study of ancient Philistine DNA appears to corroborate the long-held hypothesis that the Philistine “Sea Peoples” arrived from the Aegean region.

Through analysis of 10 ancient individuals’ DNA, the study suggests that Philistines reached Ashkelon from Europe by the 12th century BCE, the early Iron Age. After two centuries, however, the European genetic markers were dwarfed by the Levantine gene pool, suggesting intensive intermarriage. The Philistine culture and peoplehood remained distinct from other local communities for six centuries. 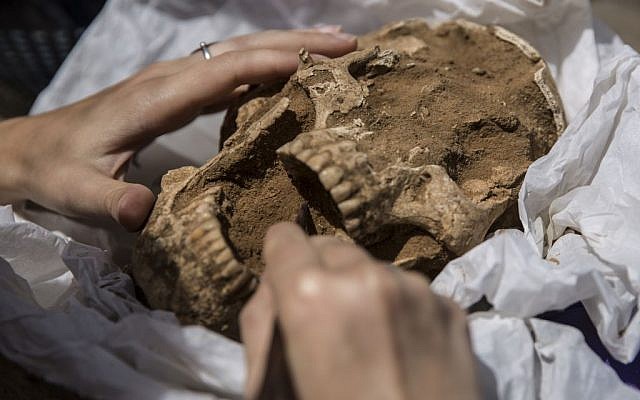 The DNA study is important, said Maeir, because it is the first and confirms that at least a component of the Philistine DNA come from the west. He did not find the results surprising due to the myriad of archaeological evidence that also supports the conclusion. 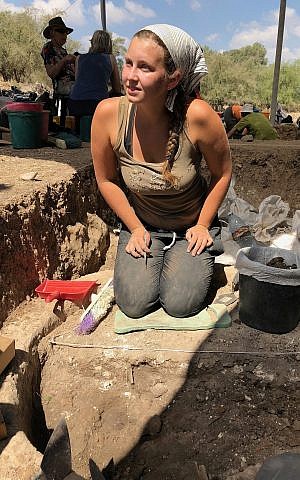 A volunteer at the Tell es-Safi/Gath Archaeological Project, July 2018. (Amanda Borschel-Dan/Times of Israel)

According to Maeir, there is in Greece, Anatolia and Cyprus a tradition of building with large and monolithic stones, similar to what is now found at Gath. He said he has discussed the possibility of an imported architectural style at Gath among his colleagues and does not rule out the idea.

“It is possible there is another tradition or traditions coming out here [in the large architecture], and it could very well be that they are western,” he said.

The Bar-Ilan professor explained that in classical Greece, as seen in remains of the Bronze Age Mycenaean culture, there were walls so enormous that Greek philosopher Aristotle thought the stones could only have been moved by the cyclopes. From this perception, recorded in Pliny’s “Natural History,” comes the archaeological term, “Cyclopean Walls.” 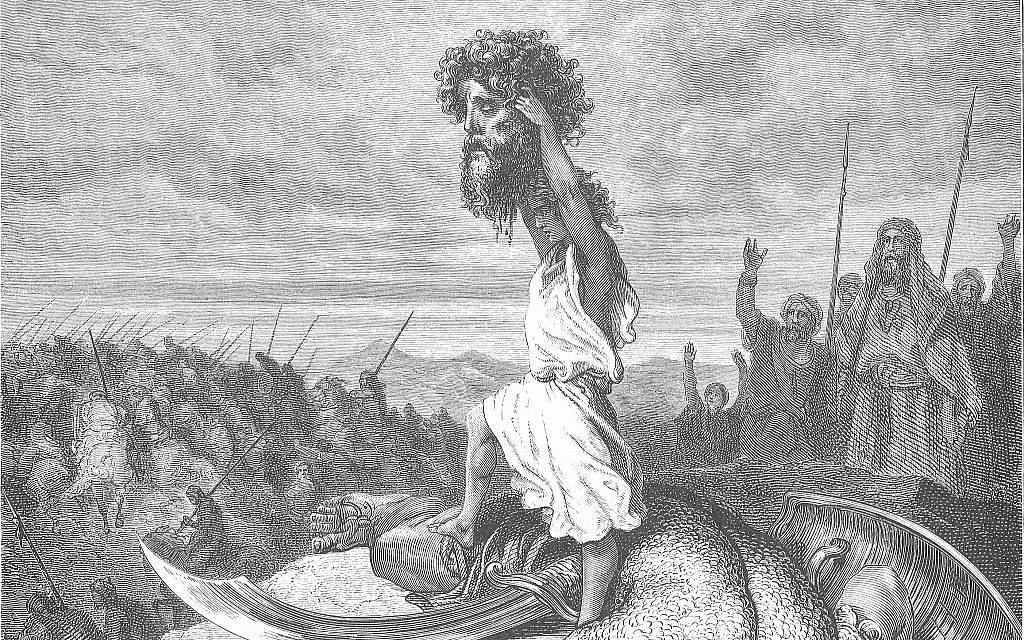 “All Philistine skeletal remains discovered so far have shown absolutely no evidence that the people were larger or different from normal-sized people,” joked Maeir. In light of the new find, he wonders whether the various biblical traditions referring to the giants of Gath — Goliath is only one example — may stem from the size of the Philistines’ monumental building.

Perhaps the authors of the Bible saw the remains of the outsized 11th century building on the ground, speculated Maeir, and thought to themselves, “Enormous stones? Who could move such things? Only giants could move it.” Similar mythological narratives have developed at other ancient wonders, including Stonehenge and Easter Island, he said. 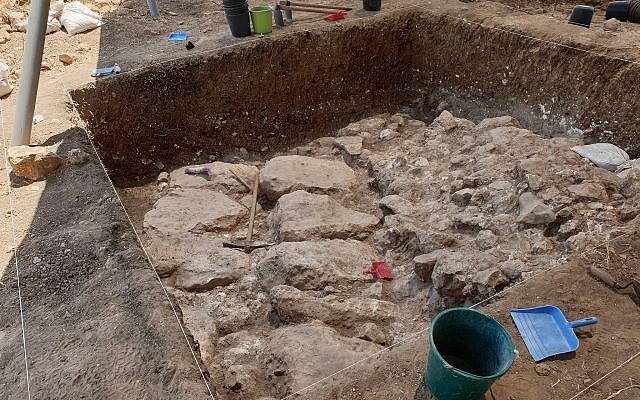 “Maybe there’s a family of large people we haven’t found, but it’s more likely to say that a mythical story developed over time based on the size of the architecture,” he said.

We can’t know the Philistines’ take on the giant story — written Philistine inscriptions are extremely rare, and often undecipherable.

In previous decades, said Maeir, archaeologists had thought it was just a question of time until they would find the “Philistine archive.” Today, he’s come to the conclusion that “the Philistines didn’t write a lot.” At the same time, the neighbors of the People of the Book “could do all kinds of impressive things and not write a word.” 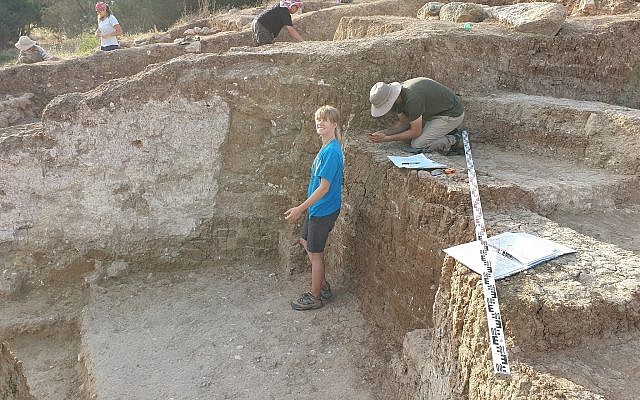 In addition to the gigantic building discovery, Maeir and his team also uncovered several 3,000-year old rooms that appear to be fortifications created just prior to the Hazael conquest. The 9th or 10th century mudbrick rooms were filled with earth, which preserved their 2 meter-high plastered walls and doorways leading to other rooms. It is unusual to have such high walls made of intact sun-dried bricks, he said.

This summer’s dig has just concluded. According to the project’s well-updated website, 2021 will mark the 25th and final season.

“You excavate a site so for long that you think you understand it,” said Maeir. “But every turn of the trowel can bring a new and unexpected find.” 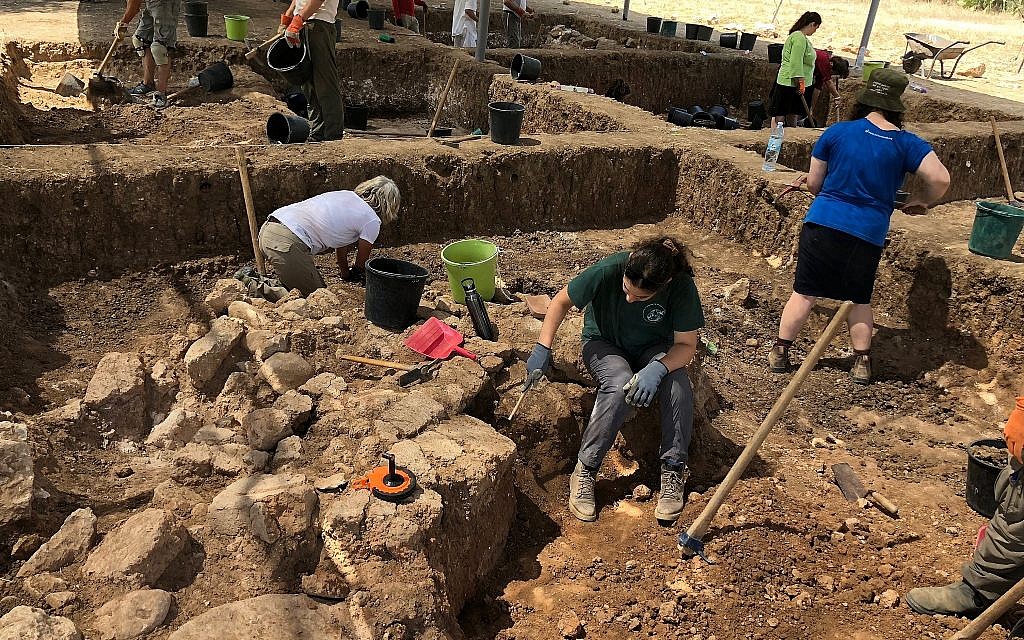