While there are some signs of regeneration at Negev site of effluent spill, many contaminants remain in soil, hobbling flora growth and preventing fauna from bouncing back

Three years after one of Israel’s worst environmental disasters — a massive escape of industrial effluent — the Ashalim stream has begun to show initial signs of recovery, though the sands nearest the leak are still seriously polluted.

Nine natural floods that have swept through the area in the Negev Desert’s Ashalim Nature Reserve since the June 2017 disaster have not managed to wash away the fluorine, phosphorus, sulfur, sodium and heavy metals that remain polluting the soil. Cement-like layers of fertilizer production byproduct phosphogypsum cover substantial areas of the nature reserve.

Scientists fear that seeds are suffocating before they can germinate, causing environmental damage that continues to ripple through the web of food chains and raising concerns over the future of the ecosystem.

Some of the microorganisms, essential players in the nitrogen cycle, are still absent. The beautiful white broom, which normally explodes into bloom in early spring, feeding pollinators and sheltering smaller plants and animals, is barely producing flowers. Previously common species of vegetation, such as the salt bush, are now harder to find, while invasive contaminant-resistance plants that do little to support local life have moved in.

Wildlife is struggling to return. 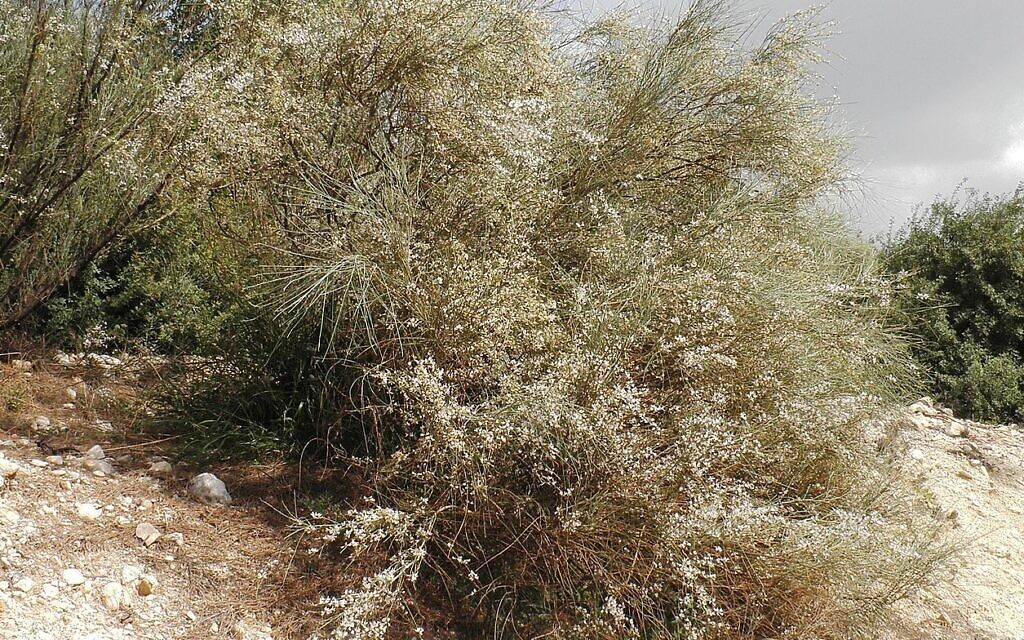 “While there are some signs of recovery, there’s multi-layer damage in the ecosystem in general, including at the base of the food web, which can affect the long term viability of the whole ecosystem,” said Rael Horwitz, who coordinates the program monitoring the effects of the spill and the recovery. 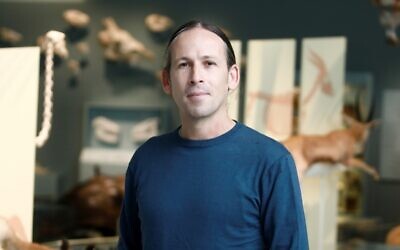 Dr Rael Horwitz, coordinator of the monitoring program at the Ashalim stream, from HaMaarag at the Steinhardt Museum of Natural History, Tel Aviv. (Yael Tzur)

On June 23, 2017, the wall of the evaporation pond at the ICL Rotem fertilizer plant collapsed, sending between 100,000 and 250,000 cubic meters (3.5 million to 8.8 million cubic feet) or more of highly toxic wastewater rushing through the Ashalim stream.

ICL Rotem, (formerly Rotem Amfert Negev Ltd) sits on the Rotem plain — a center for phosphate mining in the Negev desert southwest of the Dead Sea.

The nearby Ashalim stream, bounded by high canyon walls in many places, is a popular hiking trail and an important ecological corridor that links the Negev and Judean deserts. 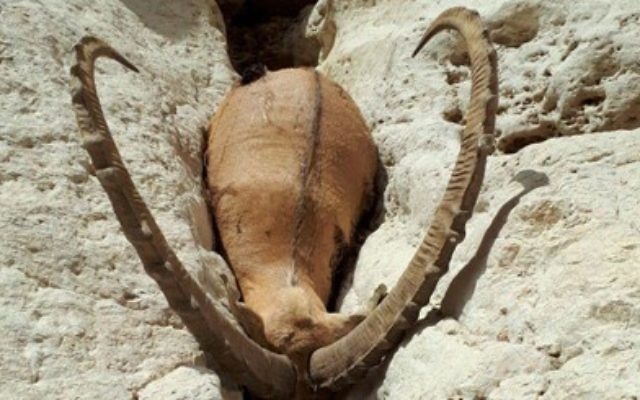 A dead ibex found on July 15, 2017, following the collapse of an evaporation pond wall that released toxic waste water into the Ashalim stream in southern Israel. (Israel Nature and Parks Authority)

At least 13 ibex — a third of those living in the area — and numerous foxes and birds were found dead in the two weeks following the spill, according to the Environmental Protection Ministry.

In the wake of the disaster, the Israel Nature and Parks Authority launched a five-year recovery monitoring program at Ashalim, under the aegis of HaMaarag — the national program for assessing the state of nature in the country at the Steinhardt Museum of Natural History at Tel Aviv University.

The state of the reserve has been tracked by Zavit, a news agency founded by the Israeli Society of Ecology and Environmental Sciences.

Fifteen teams of researchers from universities and research institutes throughout Israel have been monitoring the soil, water, microorganisms, vegetation, aquatic creatures that live in rock pools, insects and vertebrates, including small mammals and birds. The INPA had already been monitoring the ibex annually.

At a virtual meeting last month, scores of researchers described the often hard physical work, painstaking collection of samples and endless experiments that go into the project, providing just some of the pieces of the unfathomably complex puzzle called nature. 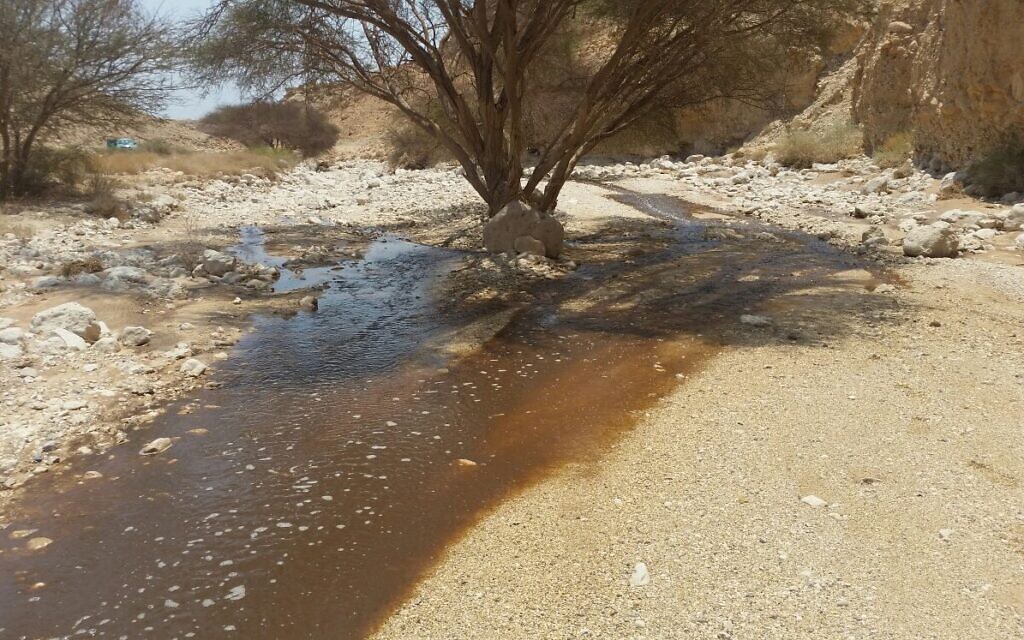 The Ashalim stream right after it was polluted in June 2017. (Georgi Norkin, Israel Nature and Parks Authority)

Experts from the Agriculture Ministry’s Volcani Center, which does soil research, reported that cyanobacteria have not yet recovered in certain areas. The microorganisms are found in soil crusts, and produce food via photosynthesis, making them crucial for the entire food web.

Some of the other microbes which convert inorganic nitrogen compounds into a form that plants can absorb are starting to recover, while others are not. Sparser than necessary plant cover further affects the food web.

Efrat Gavish-Regev, the scientific manager of the Israeli Arachnid Collection, which focuses on spiders and scorpions at Hebrew University’s National Natural History Collections, noted that scorpions are still active on the contaminated sand. However, carnivorous wolf spiders are few and far between and orb spiders have almost disappeared, possibly because there are no shrubs left on which to weave their webs.

Shimon Rachmilevitch and Natalie De Falco of Ben Gurion University’s desert research institute discovered arsenic in the new leaves of several species. The roots also showed signs of arsenic, which can hamper the plants’ uptake of nutrients from the soil, and other heavy metal contamination.

Noga Kronfeld-Schor of Tel Aviv University’s Zoology Department noted that spiny mice at Ashalim were smaller than elsewhere and that of those that were trapped and released, there were no pregnant females or juveniles.

Researchers also found that the feathers of young birds indicated an unhealthy accumulation of copper and zinc in their bodies.

“So far, we have a lot of results of heavy metal bioaccumulation in rodent and bird tissue in the Ashalim area,” Horwitz said, though the full results of ecotoxicology analyses were not yet available. 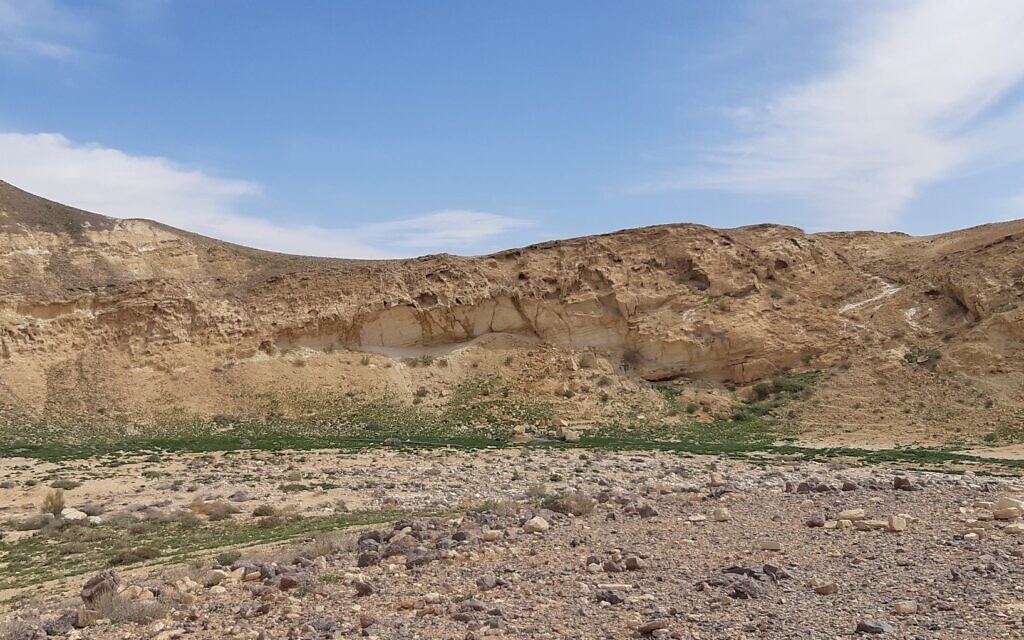 A picture taken on April 29, 2019, shows rich vegetation growing above the line of the polluted streambed, while it is far sparser in the foreground, which bore the brunt of the 2017 disaster. (Courtesy HaMaarag)

To address the continued damage, the INPA is looking into replacing the sand by trucking in sand of the same geological age from quarries nearby. In the meantime, authorities reopened the stream to the public in June.

A month after the spill, the Environmental Protection Ministry launched a criminal investigation into Rotem’s management and the parent company, Israel Chemicals Ltd. It eventually filed a civil class-action suit seeking NIS 397 million ($112.5 million) in damages, but agreed to out-of-court mediation, which is still ongoing.

An INPA spokesperson told The Times of Israel that it was unclear whether an agreement could be reached, but that Israel Chemicals Ltd was funding part of the monitoring.