Less than a month after Knesset members were sworn into office in April, Blue and White MK Gadeer Kamal-Mreeh, the first Druze woman ever to serve in Israel’s parliament, initiated an effort to amend the controversial Jewish nation-state law.

The 35-year-old resident of Daliyat al-Karmel, the largest Druze town in Israel, submitted a proposal to the Knesset’s Secretariat in May to change the law, a first step often required for any lawmaker trying to advance an amendment to existing legislation.

While no committee discussions or votes on the proposal took place before the sudden dissolution of the Knesset on May 28, Kamal-Mreeh said in a recent interview that she remains committed to amending the law.

“We need to make the law complete, fix it and add the value of equality to it,” Kamal-Mreeh told The Times of Israel in her new office in central Daliyat al-Karmel, adding that her proposal does not seek to “threaten Israel’s national character or its identity as the Jewish people’s nation-state.” 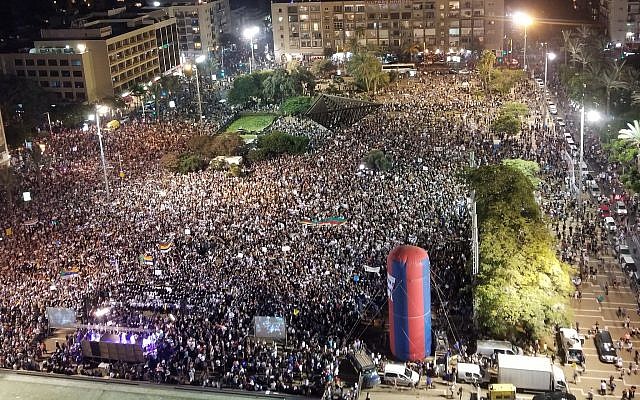 Tens of thousands participate in a Druze-led protest in Tel Aviv against the Jewish nation-state law, on August 4, 2018. (Adam Rasgon/Times of Israel)

The nation-state law, which the Knesset passed in a 62-55 vote on July 19, 2018, enshrined Israel as “the national home of the Jewish people,” recognized Jewish holidays and days of remembrance, declared Hebrew the state’s sole national language and backed “the development of Jewish settlement as a national value.”

The legislation included no reference to the equality of all Israeli citizens akin to the one made in 1948 in the Declaration of Independence, which pledged that the nascent state would “ensure complete equality of social and political rights to all its inhabitants irrespective of religion, race or sex.” 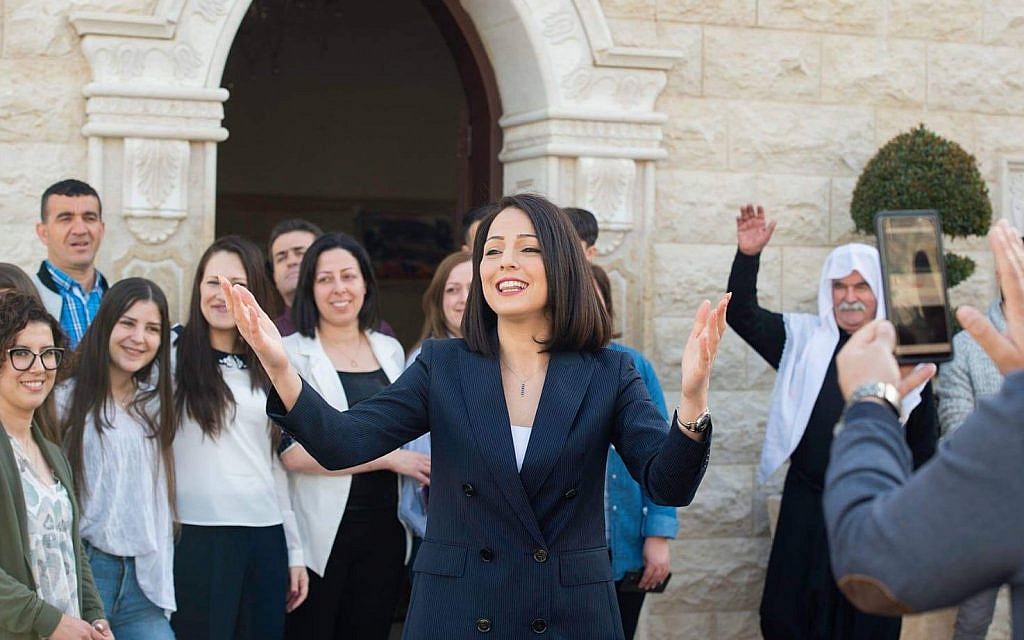 The young parliamentarian, however, dismissed calls including those of a number in the Druze community, which follows a 1,000-year-old offshoot of Shiite Islam, to abolish the law, describing them as impractical.

“I am a very realistic person. I know that, under the current circumstances, the State of Israel is moving to the right, to the extreme right,” said Kamal-Mreeh, who dedicated a significant portion of her maiden speech at the Knesset in May to her frustration with the nation-state law.

I had concerns that my society would not accept me running for office, but in the end I decided to do it and I was happy to see that even the religious people voted for me

Her proposal calls for adding a phrase to the law stating that “Israel is the home of all of its citizens and provides them with equal rights,” a reference affirming that Arabic is Israel’s second official language, and a statement mentioning the state’s commitment to advancing the development and planning of communities for all its citizens.

Kamal-Mreeh, the sole native Arabic speaker among Blue and White’s 35 MKs, is married and a mother of two. She completed an undergraduate degree in social science and medical imaging at Bar Ilan University in 2007 and started her professional life as an ultrasound technician. Later she obtained a masters in international relations at Haifa University, then pursued a career in journalism and became the first non-Jewish woman in Israel to anchor an evening newscast regularly in Hebrew. 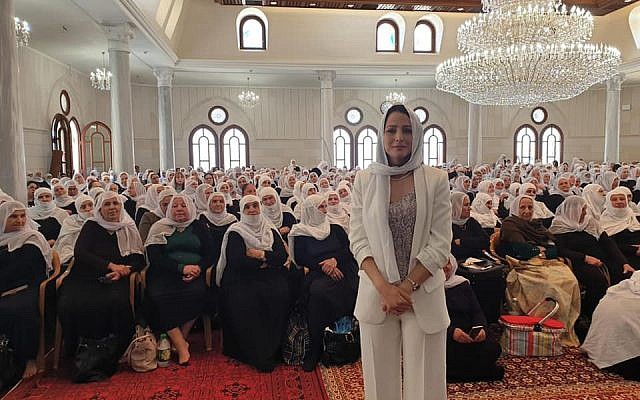 She said that she initially was hesitant to pursue public office as a Druze woman who lives in a traditional community.

“I had many difficulties in making a decision because I live in a conservative and patriarchal society. A Druze woman entering politics is not a given,” she said. “I had concerns that my society would not accept me running for office, but in the end I decided to do it and I was happy to see that even the religious people voted for me.”

Some 19,000 Druze voted for the Blue and White party in April, over one-quarter of those in the community who cast ballots. Kamal-Mreeh said that after she won a seat as number 25 on her party’s slate, Druze spiritual leader Sheikh Muafak Tarif called to congratulate her.

Kamal-Mreeh also fleetingly praised Ayman Odeh, leader of the predominantly Arab party Joint List, for suggesting he would like to join a center-left governing coalition, but she strongly criticized the conditions he set to make such a move.

“First of all, Ayman Odeh’s statement was very courageous, but he has set conditions that even he understands are unrealistic and impossible,” she said. “Ayman Odeh knows that a renewal of the peace process and an end to the occupation are conditions that cannot be met in the next two months.”

In an interview published with Yedioth Ahronoth in late August, Odeh said he was willing to join a center-left coalition but outlined numerous conditions including a revival of the Israeli-Palestinian peace process, an end to Israel’s military rule over the Palestinians, the establishment of a new Arab city, an end to the demolition of Palestinian homes in the West Bank, and other measures.

In a tweet on the same day the newspaper ran the interview, Odeh added another  condition — Israel ending its military rule over the Palestinians –which did not appear in the article.

At the time the interview was published, a number of Blue and White MKs came out against the prospect of sitting in a coalition with the Joint List, an alliance of four Arab or Arab-majority parties. 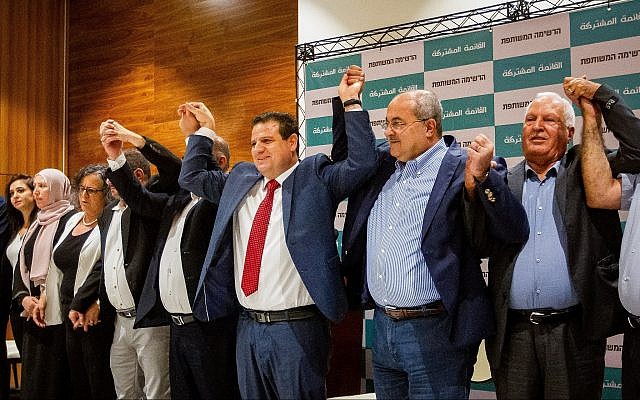 Members of the Hadash, Ta’al and Ra’am parties pose for photographs during a press conference in Nazareth announcing on the reconstitution of the Joint List electoral alliance, July 27, 2019. (Flash90)

Israel’s upcoming national elections are scheduled for September 17. A coalition is usually formed several weeks after the vote.

Kamal-Mreeh also accused the Joint List of not grasping the main concerns of the Arab public.

“The fact that [only] 49 percent of the Arab voters cast ballots in the last elections is a badge of shame for the Arab parties and it indicates that Arab citizens are not satisfied with them. Arab citizens with whom we are meeting want to receive equal rights and answers to the matters that concern them. They desire to be integrated in all places in society and involved in government institutions. They also hope industrial zones will be built in their communities,” she said.

“At the moment, Arab citizens are not primarily concerned with what is happening in the West Bank and the Gaza Strip. They want to obtain their rights, but Ayman Odeh, his partners and the Arab parties do not understand that. They are putting what is happening in the conflict at the center of their agendas as opposed to what the Arab citizens want and continuing to miss opportunities to affect change.”

The parties that make up the Joint List have frequently demanded that the state provide more funding for Arab communities, crack down on crime in Arab towns and expedite the process to approve building plans there. But they also have often commented on and spoken out about issues related to the Israeli-Palestinian conflict. 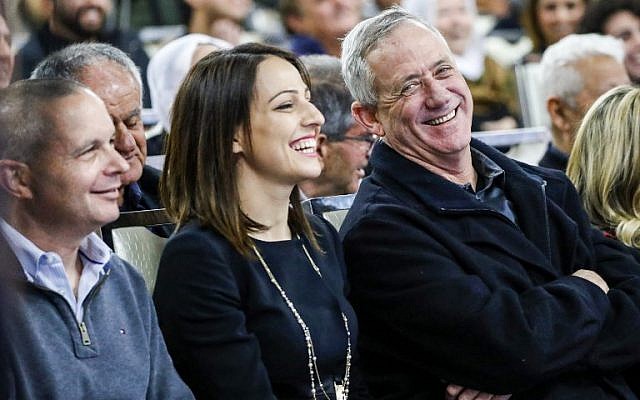 Blue and White candidate Gadeer Kamal-Mreeh (C) and party head Benny Gantz (R) at a meeting with members of the Druze community in the city of Daliyat al-Karmel in northern Israel on March 7, 2019. (JACK GUEZ / AFP)

While Blue and White’s Knesset members come from a wide spectrum of Israeli society including the Ashkenazi, Mizrahi, ultra-Orthodox, Russian-speaking, Ethiopian and Druze communities, none of its lawmakers are Arab Christians or Muslims, who together make up approximately one-fifth of Israel’s population.

Asked why Blue and White does not have any Muslims or Christians on its list, despite boasting representatives of many other segments of Israeli society, Kamal-Mreeh contended that she serves in the Knesset on behalf of the entire Arab community.