LONG ISLAND, New York — After William “Bill” Levitt fought alongside Black soldiers as a Navy lieutenant in World War II, he returned home to pioneer the American suburb. In contrast to the nominal racial integration of the Navy, however, Blacks were banned from living in Levitt’s ticky-tacky neighborhoods.

With Jewish roots in Austria and Russia, the Levitt family did for houses what Henry Ford did for automobiles. To build Levittown on Long Island, their first successful suburb, Levitt & Sons deployed a high-tech 26-step process. The firm’s methods and policies were imitated in thousands of suburbs all over the country.

Between 1947 and 1951, Levittown’s original “footprint” was completed with 17,000 houses, several shared swimming pools, and fenceless yards that encouraged children to roam.

“But I’m not here just to build and sell houses,” said Levitt in a 1952 interview conducted while the next Levittown — in Pennsylvania — was going up. “To be perfectly frank, I’m looking for a little glory, too. It’s only human. I want to build a town to be proud of,” said Levitt. 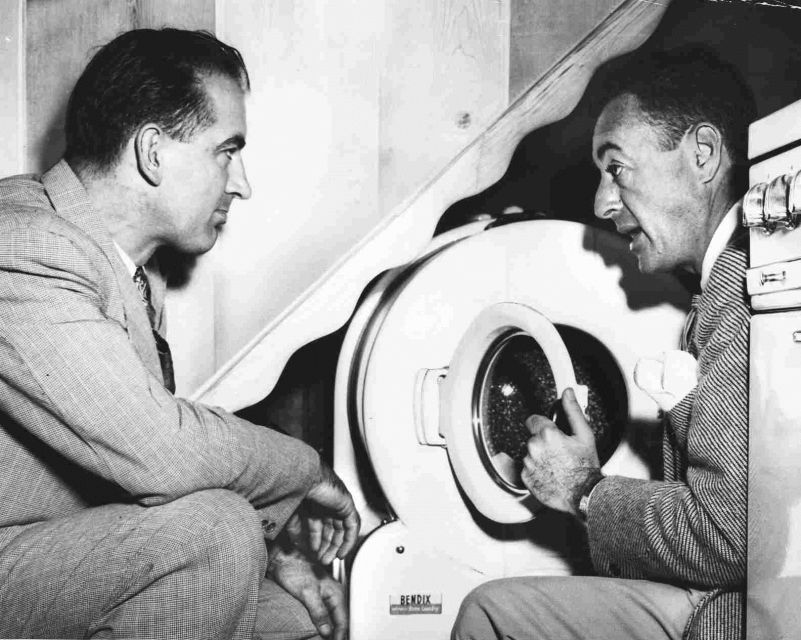 In New York and Pennsylvania, “Levittown” became synonymous with mass-produced suburbia. Thanks to the post-war GI Bill, veterans could purchase an appliance-filled house for a very small down-payment — unless they were Black.

In all of Levitt’s communities, including New Jersey’s Willingboro, the firm enforced policies designed to keep Blacks from buying houses. Levitt also allowed his upscale Strathmore community, on Long Island, to keep Jews out.

Most notoriously, a few miles away from Strathmore in Levittown, “Clause 25” of the housing agreement forbade houses “from being used or occupied by any person other than members of the Caucasian race.”

One year into the life of Levitt’s “Clause 25,” the US Supreme Court ruled that racially restrictive covenants violated the 14th Amendment. Although anti-Black clauses could no longer be inserted into contracts after 1948, Levitt continued to squash attempts to racially integrate his towns. 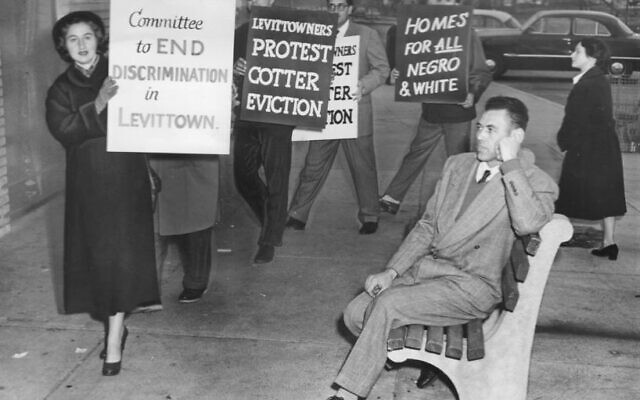 “The Negroes in America are trying to do in 400 years what the Jews in the world have not wholly accomplished in 6,000 years,” wrote Levitt, who was sued several times for his racial policies.

“As a Jew, I have no room in my mind or heart for racial prejudice,” wrote Levitt. “But I have come to know that if we sell one house to a Negro family, then 90 or 95 percent of our white customers will not buy into the community… We can solve a housing problem, or we can try to solve a racial problem, but we cannot combine the two,” wrote Levitt. 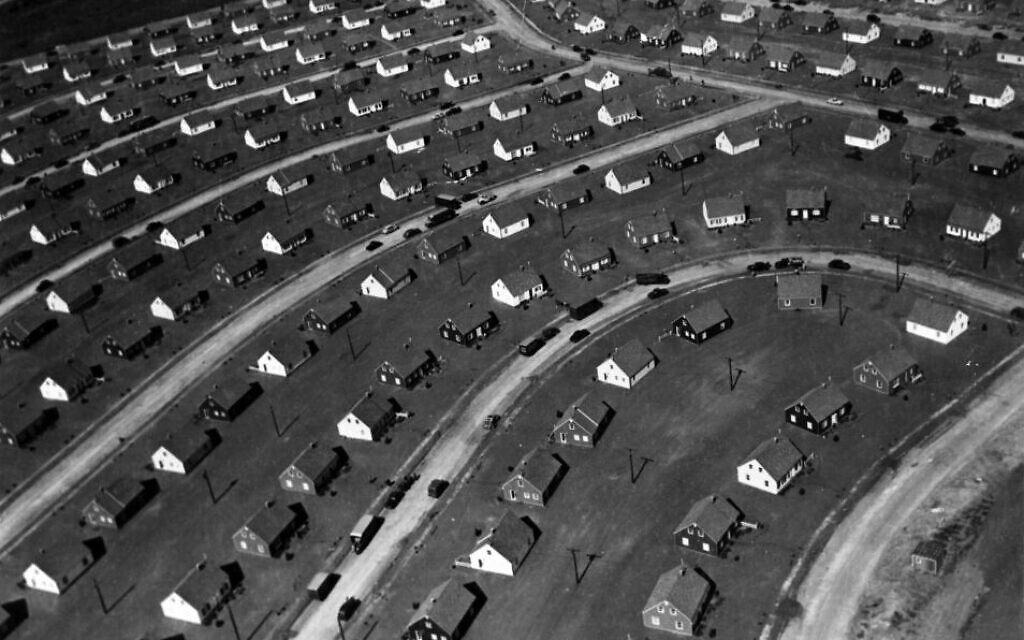 Six years after the completion of Long Island’s Levittown, the crusade against Levitt’s racial policies was fought in front of a house in Levittown, Pennsylvania.

The “Caucasian-only” policy of Levitt’s developments was challenged in the Levittown built north of Philadelphia, where the community’s gently-sloped, winding lanes were named for flowers and trees.

In August 1957, a Black family moved into the all-white suburb. William Myers was a veteran and graduate student in engineering, and his wife Daisy was also a college graduate. Along with their three children, the Myers moved into a three-bedroom house. 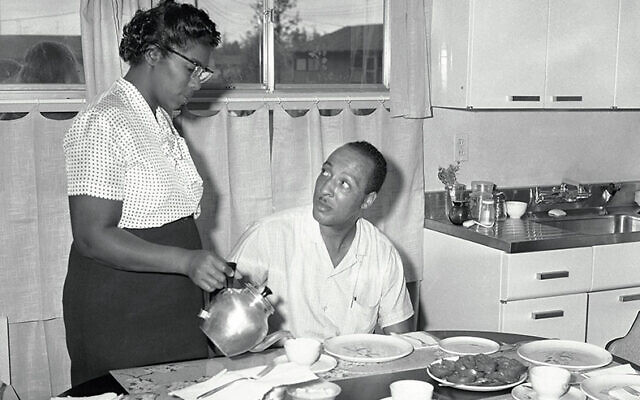 William Myers is served coffee by his wife, Daisy, in their new home in Levittown, Penn., Aug. 19, 1957 (AP Photo/Sam Myers)

Within hours of the family’s arrival, hundreds of people gathered outside the house to shout their disapproval. All over town, rumors swirled about “outside groups” sponsoring the Myers’s move to Levittown, including “the NAACP, the Jews, and the Reds.”

The “crisis in Levittown” made headlines around the globe. A group called “The Levittown Betterment Committee” demanded the Myers family be removed and a rock was thrown through the front picture window.

Throughout the crisis, a Jewish couple — Bea and Lewis Weschler — worked with other Levittown families to help the Myers. In fact, a coalition of neighbors had been organizing for six weeks prior to the Myers’ move-in day, in order to coordinate a response to the anticipated unrest. 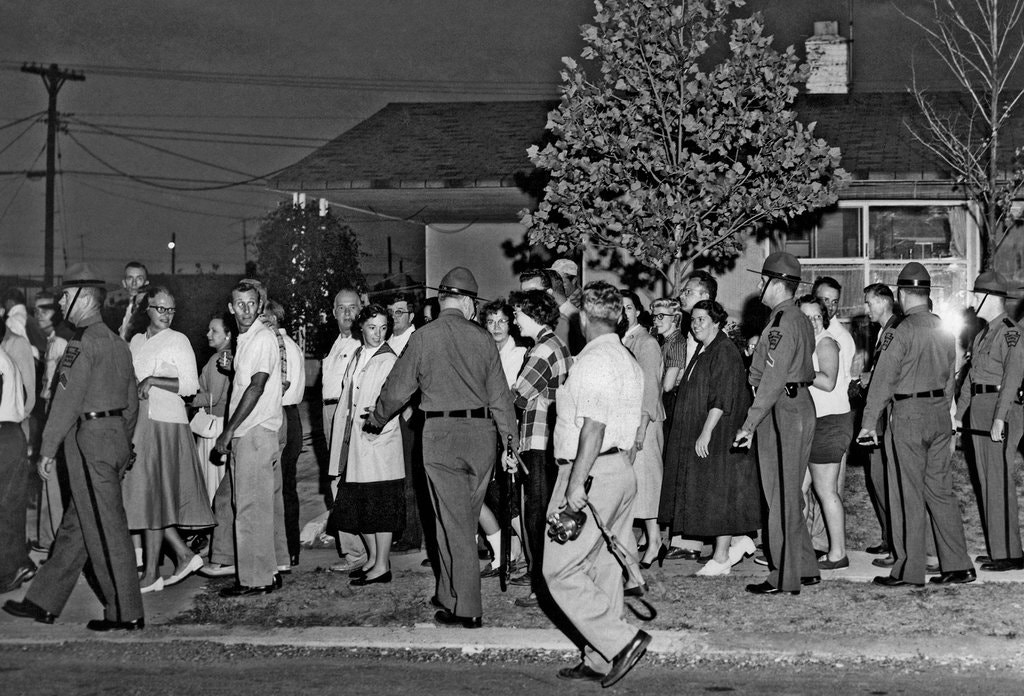 In an account of Levittown’s desegregation written by son Nick Weschler – who was 10 at the time — the terrorization of the Myers family and their allies went on for months. For example, the house behind the Myers was purchased and turned into the “Dog Hollow Social Club,” with slavery spirituals blasted from speakers day and night.

The Weschler family and their largely Quaker and Protestant co-activists were targeted with non-stop prank calls and threats, including “KKK” scrolled onto the side of the Weschler house in red letters. A note attached for “Mr. W.” urged the family “to pull out while you can.”

During the Ku Klux Klan-fueled campaign in Levittown, crosses were burned on the properties of half a dozen families that supported the Myers, including on the Weschler lawn. At one point, a police officer was seriously injured with a rock. 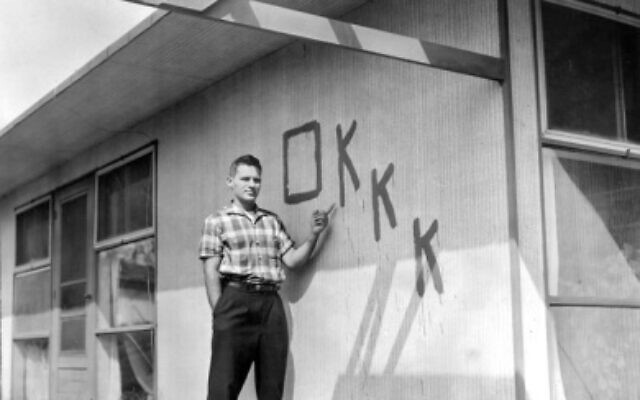 Lewis Weschler outside his house in Levittown, Pennsylvania, 1957 (public domain)

Throughout the ordeal, state and local police were unable to curtail the harassment. Only after the victimized families went to the State House and threatened to leave Levittown, was serious action taken. A permanent injunction was placed on seven of the worst offenders, and the violence ended with a tacit victory for integration.

William Levitt kept Blacks out of his towns for as long as he could, but a coalition of faith-based neighbors managed to reverse that racist policy in Pennsylvania. The tactics deployed by activists in Levittown — including “fact-finding” groups to squash rumors — were repeated a few weeks later in Little Rock, Arkansas. 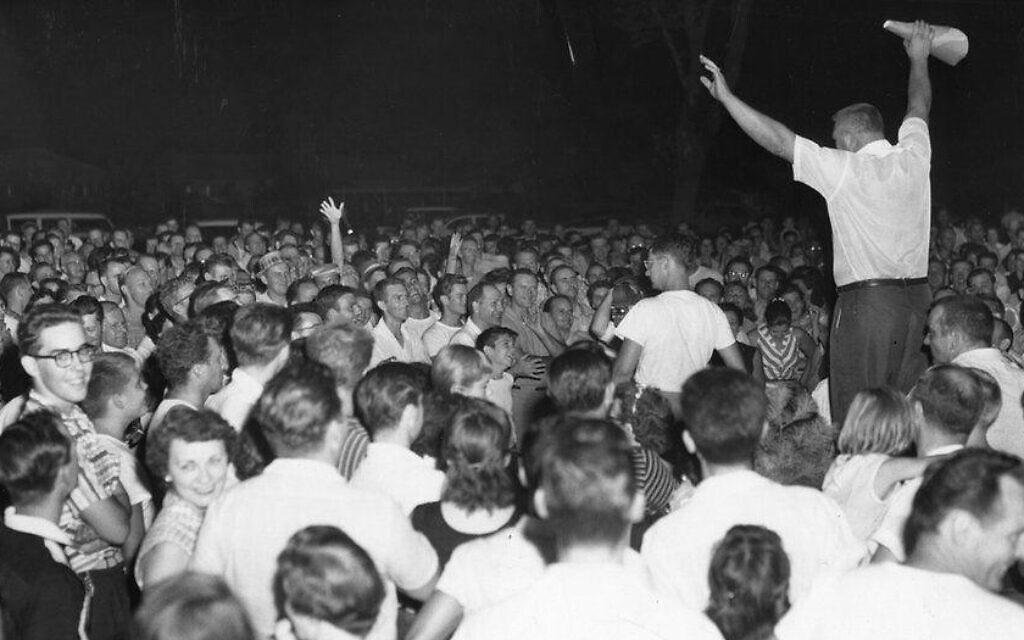 “When you find there are no more areas to which a white person can move without having a Black family, that will be the best end there could be to segregation,” said a pro-integration Levittown homeowner and mother in the 1957 documentary, “Crisis in Levittown, PA.”

Sixty-four years after the battle for integration, the Pennsylvania town of 52,000 is nine-tenths white. According to US Census projections, the country will become “minority white” in 2045, with whites comprising 49.7% of the population.