In February this year, denying rumors he was considering running in the Jerusalem mayoral election, Environment and Jerusalem Affairs Minister Ze’ev Elkin told reporters he felt his contribution was best served as a minister on the national stage. Plus, he pointed out, he didn’t even live in Jerusalem.

“Maybe if there was a mayor of ‘Greater Jerusalem,'” Elkin quipped, referring to the Kfar Eldad settlement he lived in, some 15 miles south of the capital.

Eight months later, as one of the leading candidates to succeed outgoing Jerusalem Mayor Nir Barkat, Elkin has moved from the West Bank to the Jerusalem neighborhood of Pisgat Ze’ev, and says he now realizes he can, in fact, give more in the national arena as mayor of the country’s capital.

“I am willing to give up the position of a senior minister and member of the security cabinet for the sake of Jerusalem, because Jerusalem is a challenge at a national level of the utmost importance,” Elkin told The Times of Israel in a recent interview in his Knesset office.

“Tackling and finding solutions to the challenges in Jerusalem is of the utmost national importance,” he said, speaking ahead of the October 30 election.

Those challenges, according to Elkin, include both the day-to-day municipal concerns of the city’s 850,000 residents, and the macro issues of how it can compete with other cities both nationally and internationally.

With his years of experience in government, Elkin argued, he is more qualified to do that than rivals Moshe Lion and Ofer Berkovitch, who are seen as the other top candidates in the race.

Promising to bring “life and prosperity” to Jerusalem, Elkin laid out the two key priorities he said he sees for the city during the five-year term he hopes to win: lowering housing prices for young couples, and increasing the city budget by encouraging business to move there.

“The city is getting old because young couples are leaving due to the high price of an apartment. The number of Jews in the city is falling compared with other [population groups]. Negative migration of Jews from the city means that we are now at around 60-40 percent Jews to Arabs,” the 47-year-old Elkin said, framing his first priority in terms much broader than the issue of living expenses for young families.

To tackle housing costs, he said he plans to “dramatically increase the approval of building projects” in order to meet the needs of the city’s Jewish population, which he says requires an additional 2,000 apartments a year just to provide for natural growth. To do that, and to close the gap created over the past 20 years, Jerusalem needs “much, much, much more building,” Elkin said. 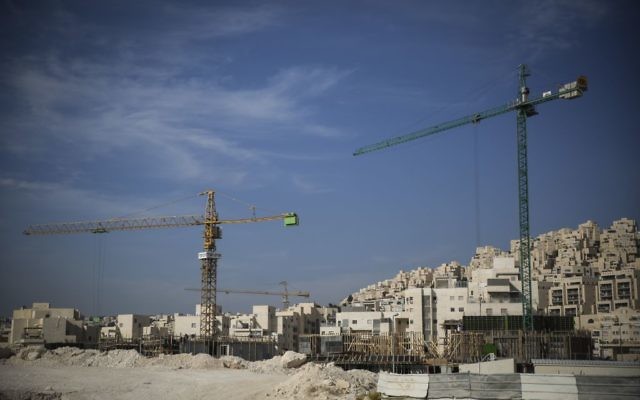 Asked if he as Jerusalem minister was partly responsible for the shortage of building projects, Elkin denied this, and instead blamed opposition from environmental groups (whom he has also faced in his role as environmental affairs minister) and the Obama administration,”who made it very hard to build” Jewish neighborhoods in East Jerusalem.

“I will make it a real priority like it hasn’t been before,” he promised.

The increased building will also benefit the ultra-Orthodox population, with “plenty of opportunity for new projects all over the city,” and in turn reduce tensions caused when residents of secular areas complain of being overrun by their religious neighbors, Elkin said, but he indicated that Jerusalem’s Arab population would not be included.

“There are lots of issues with the way they build and use the space,” Elkin said briefly of Arabs in East Jerusalem. “That is something we will get to when in office, but I’m focusing on different issues at the moment.” 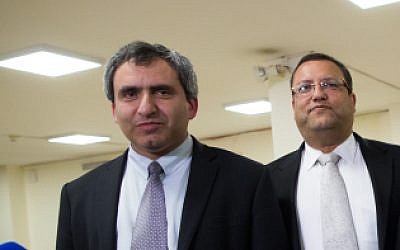 Jerusalem’s ultra-Orthodox population makes up over a third of the capital’s Jewish electorate and has served as the deciding swing vote in recent municipal elections. Jerusalem’s Arab population has historically boycotted the mayoral race.

Lion has been endorsed by leading ultra-Orthodox rabbis, likely giving him the bulk of the ultra-Orthodox vote in the capital. But he received the backing of much of the Haredi community in the city in the 2013 mayoral race too and was nonetheless defeated by Barkat.

Elkin immigrated from Ukraine in 1990 and began his political career in the Kadima party under Ariel Sharon, but he left the party for Likud after the more dovish Tzipi Livni took over as chair. As coalition chairman in the previous government, Elkin earned the respect of fellow lawmakers as a wily and extremely competent political negotiator, a steady hand at the helm of the last coalition who famously never lost a vote in the Knesset plenum in four years.

And he hopes to use those negotiation skills as mayor.

Citing an annual budgetary loss of NIS 150 million ($40 million), the Jerusalem minister said the city needed to stop relying on “government handouts” and develop its own solid source of income.

By enticing businesses to move into Jerusalem and encouraging new ones to open here, Elkin believes the city can increase its revenue via the taxes it collects so as not to need regular budget increases from the government. 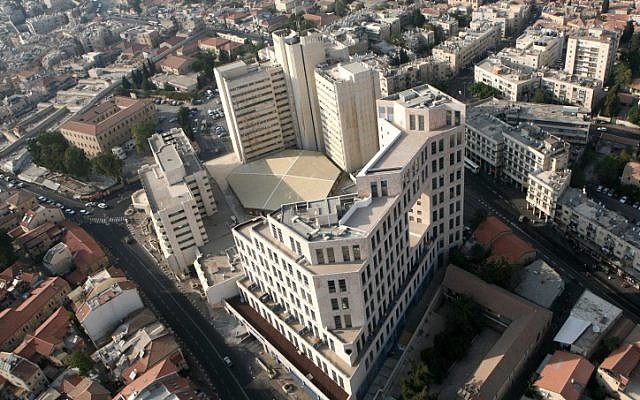 A bird’s-eye view of the Klal building, a shopping and business center in the heart of Jerusalem on October 7 2007. (Yossi Zamir/Flash90)

To do this, Elkin says the city needs a “huge one-time investment from the government” rather than incremental amounts each year. The funds would go toward building a number of new business hubs across the city.

“The idea is to go to the government and ask it to cooperate on this one-time project, to solve the problem at its source,” he said.

Despite early rumors that he would run, Elkin’s decision to give up his ministerial role in order to join the municipal race came as something of a surprise given his steady national political ascent since he was first elected to the Knesset in 2006. 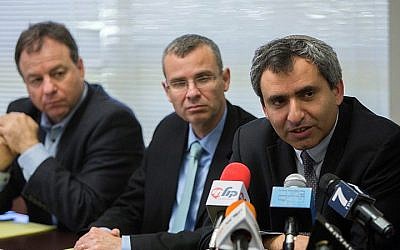 Before being appointed a minister in 2015, Elkin served as deputy foreign minister and coalition chairman, as well as chairman of the powerful Foreign Affairs and Defense Committee. Considered a close Likud ally of Prime Minister Benjamin Netanyahu, he has also served as acting deputy prime minister when the premier was abroad.

But disappointing several senior Likud members, Netanyahu has refrained from appointing a permanent deputy, and repeatedly handed some of the most powerful ministerial portfolios to junior coalition parties. The prime minister’s attitude toward potential Likud rivals has over the years led to an exodus of some of Netanyahu’s most prominent possible successors.

Against that background, Elkin admitted that he feels he has a more promising political future as mayor than he would have if he remained in government, at least for now.

“I came to the conclusion that regarding my contribution in the coming years, I can do more in working for Jerusalem than what I can give in the government arena,” he said. 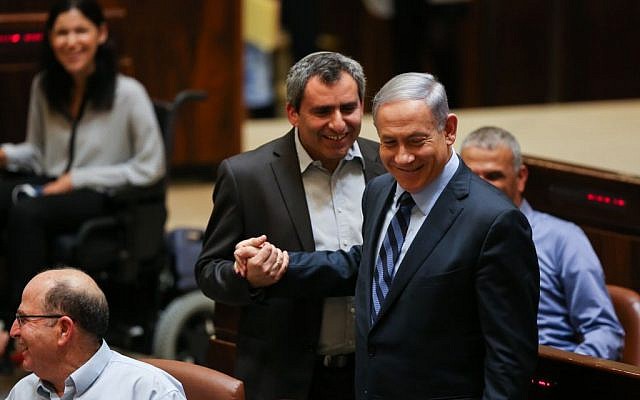 Prime Minister Benjamin Netanyahu shakes hands with Likud MK Ze’ev Elkin during a plenum session and vote on expanding the number of ministers in the new government, in the Knesset on May 13, 2015. (Hadas Parush/Flash90)

At the start of the campaign, Netanyahu appeared reluctant to offer Elkin his full backing, waiting nearly two months to issue an endorsement. And the local Jerusalem chapter of the Likud party still refuses to endorse him.

“I support minister Ze’ev Elkin for mayor of Jerusalem,” Netanyahu said in July. “As an MK, as a minister, and particularly as the Jerusalem affairs and heritage minister, Minister Elkin has done so much for our capital and proved that it is close to his heart and very dear to him. I wish him great success.”

It’s this experience, and his close relationship with Israel’s most powerful man, said Elkin, that sets him apart from his competitors. 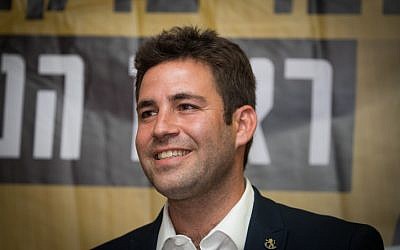 Ofer Berkovitch, Jerusalem mayoral candidate and head of the Hitorerut (Awakening) movement, at the opening of his election campaign in Jerusalem on September 2, 2018. (Yonatan Sindel/Flash90)

“I can clearly cooperate very well with the prime minister and know how government works so as to get the best for the city,” he said. “If I need to, I can call Netanyahu up to discuss the issues in person.”

A recent Elkin campaign video released on Facebook mocks 35-year-old rival Ofer Berkovitch, the secular candidate from the Hitorerut party, for being inexperienced.

In the clip, Elkin throws a bumbling Berkovitch, played by an actor, out of office during a crisis and, as he boasted in our interview he is able to do, picks up a direct line for Netanyahu to ask for help.

Give a Hanukkah gift that enlightens

Here’s a Hanukkah gift that sparks knowledge and insight about Israel and the Jewish people.

A Times of Israel Community gift membership entitles your recipient to one full year of membership benefits, at a special discounted price.