HOUSTON — Amy Goldstein never thought she’d coordinate her own rescue. But sitting atop her kitchen counter with her daughter and cats as water freely flowed into her home, the single mom realized the time had come to get her family to dry ground.

“Right now, I need a boat,” she told the Jewish Herald-Voice from her perch in the kitchen that day.

In the days leading up to Hurricane Harvey, Goldstein — a leader in Houston’s United Orthodox Synagogue’s (UOS) Flood Response Team —  had devoted all her energy to organizing a group of available doctors and checking in on the community’s most vulnerable congregants, just as she had done during previous hurricanes.

“It’s ironic being on a team doing all this rescue, yet I didn’t have everything together for myself,” she said later.

Goldstein’s home, which she had purchased within the eruv (symbolic enclosure) of the tight-knit Orthodox community after moving from New York 12 years ago, had always been spared in past storms.

That evening, after all of the other families on Goldstein’s street had been rescued by boat or helicopter, a neighbor, a member of the Jewish fraternal organization Hebrew Order of David, knocked on her door and helped the Goldsteins and their cats escape by foot to his home.

The Goldsteins haven’t lived in their house since. 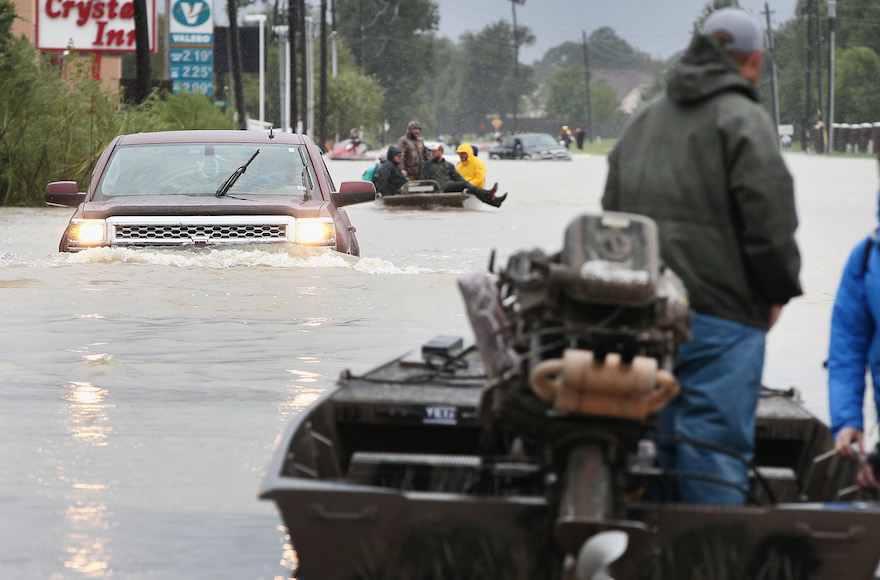 Rescue workers and volunteers help residents make their way out of a flooded neighborhood after it was inundated with rainwater following Hurricane Harvey on August 29, 2017 in Houston, Texas. (Scott Olson/Getty Images)

“You see this on television for other people, right? You don’t expect to see it for yourself,” Goldstein told The Times of Israel last month.

“We lost all of our furniture, but we are rebuilding,” she said. “We got very lucky — we only got a foot of water and got a good [insurance claims] adjuster.” 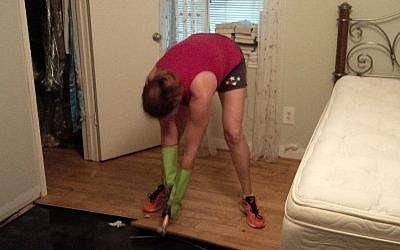 Amy Goldstein rips out the flooring of her home after Hurricane Harvey. (Courtesy)

Goldstein has been renting a garage apartment across town. She works for a nonprofit; her daughter attends the Orthodox Jewish day school, Robert M. Beren Academy.

“Whatever my financial situation was beforehand, I’ve taken a hit. A lot of families have taken a hit and need supplemental assistance,” she said.

Goldstein’s story reflects the situation of many Jewish families still struggling nine months after 19 trillion gallons of water poured onto America’s fourth-largest city over a four-day period. It was the third “500-year storm” Houston experienced in just three years — a flood with a .2% chance of occurring in any year. Its ire was unprecedented, creating $125 billion in damages.

According to Houston’s Jewish Federation, nearly three-quarters of the city’s Jewish population live in areas that experienced severe flooding. More than 2,000 Jewish households were impacted by the storm, 89% of whom were first-time flooders. 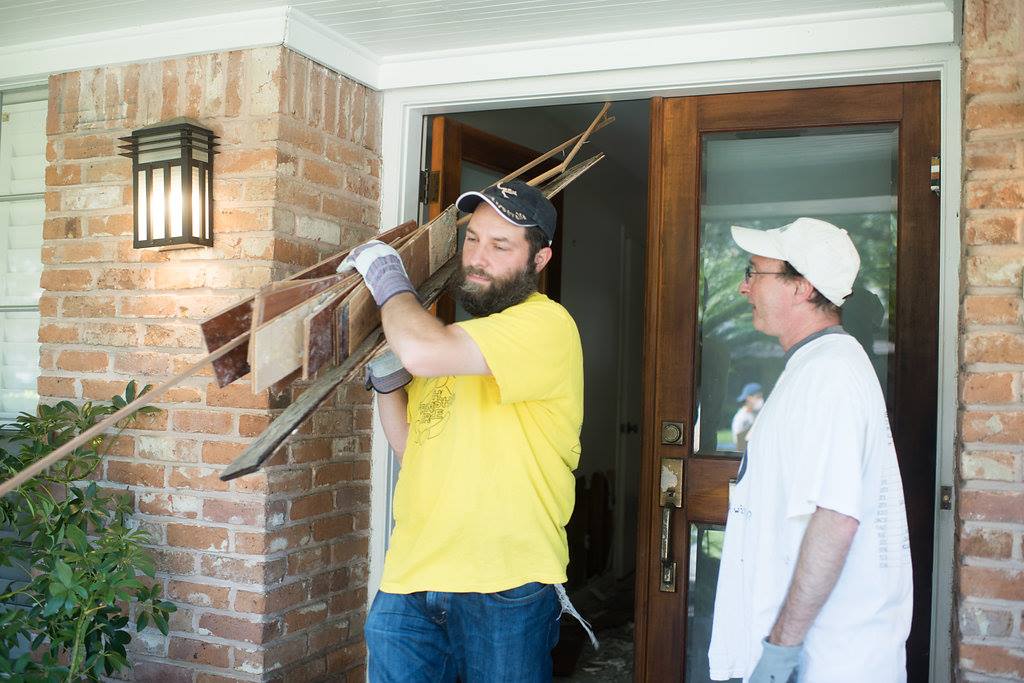 Though flooded with financial and volunteer support in the immediate aftermath of the storm — from sources ranging from their Texas neighbors to the State of Israel — Houston’s Jewish community is still struggling to keep its head above water.

The City of Houston is frantically working to build a smarter flood-preventative infrastructure before hurricane season begins again in June. The first step is to widen bayous across the city, Houston’s catchall for floodwater. According to The Houston Chronicle, while helpful, expanding Brays Bayou, which snakes through Houston’s main Jewish area, will not prevent flooding in all situations.

As the community transitions out of survival mode, leaders are contemplating how to preserve and grow Jewish life — while under the threat of another flood.

‘Not our first rodeo’

“We’re not necessarily an institution that’s wired for this kind of disaster response, even though it’s not our first rodeo,” Saratovsky said.

“At the same time, the magnitude of [Harvey] was so different, and the disproportionate impact on the Jewish community by virtue of how the storm came in, and the fact that we’re all within this three-mile radius [created] a very different kind of impact,” she said.

Orthodox synagogue UOS board member Robert Levy said that Jewish volunteers, coming from across the US and even Israel, poured into Houston in the weeks following Harvey to help prepare and deliver goods and kosher food. Many also assisted with manual labor, ripping out the sheetrock and carpeting of homes before mold set in.

The Jewish Federation kicked off an aggressive fundraising campaign. As of today, the Federation has raised $22 million, including a $1 million aid package from the State of Israel, the first of its kind to the American Diaspora, to rebuild Jewish institutions.

According to Avital Ingber, the Federation’s new CEO as of November, it’s expected that there will be $40-50 million of need in the community total.

“Harvey didn’t just come and go. The psychological and financial needs are still there,” said Francis.

According to Francis, the psychological traumas of the storm are only now setting in. She cited a recent survey which found “unprecedented levels” of psychological distress among those impacted by the hurricane.

Additionally, even for those with flood insurance, “the needs are still great,” Francis said. “For many of these middle-class families, the American dream washed away in the flood.” 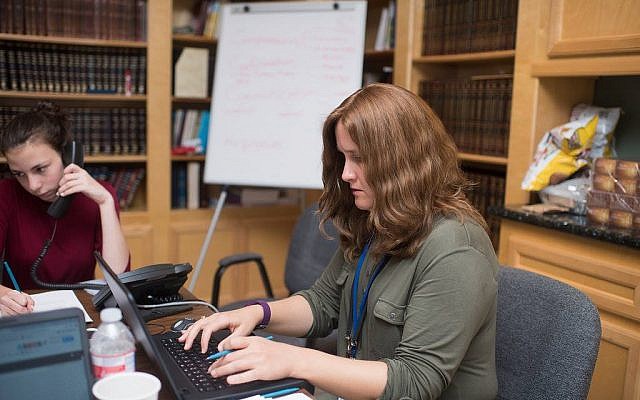 “Parents can’t send kids to college, Jewish camps or day school. Families invested in their homes and that money is no longer there,” Francis said, a sentiment reiterated in conversations with both Jewish leaders and community members.

Chabad of Houston has so far provided 400 children in Jewish day school with $500 grants. Jewish institutions across the city are doing the same, offsetting synagogue membership and tuition costs for flood victims.

Using the Federation’s funding, JFS gives a $15,000 grant to help repair Jewish households and provides other financial assistance to Jewish flood victims. The organization also offers free individual counseling treatment up to two years after the flood to anyone in need.

Francis said that for Holocaust survivors who “lost everything for the second time in their lives,” the trauma is particularly acute.

According to Leah Mueller, manager of the JFS senior services department, at least 25 Holocaust survivors’ homes were severely affected by Harvey, but all Holocaust survivors were impacted emotionally and psychologically from going without home care, electricity, or other basic needs during the storm.

Mueller said, “We found that our Holocaust survivors declined mentally more significantly after the flood, meaning [that] beginning memory loss became more severe to the level that we needed to move them into memory care facility due to Harvey.”

In general, Mueller said, the elderly population she works with experienced a rapid physical and mental decline after Harvey and many who were previously living on their own before the storm were forced to move into assisted-care facilities where they will remain.

Demolishing a synagogue, rebuilding a community 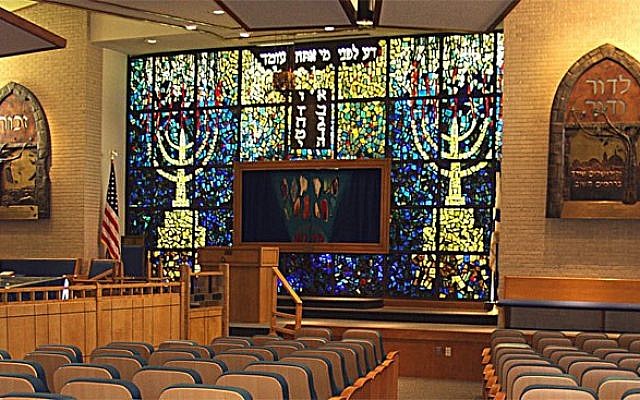 The United Orthodox Synagogue weathered the storm particularly poorly; both the sanctuary and social hall flooded.

Even today, during a drive through the neighborhood surrounding OUS, one will see that nearly every home is vacant — either for sale or under construction.

According to UOS board member Levy, who has hosted his neighbors since August while they fix their home, the challenges UOS has faced in the last several years due to flooding are Sisyphean. Continuing to put the community back together after each storm is not a long-term solution.

After Harvey, the congregation immediately repaired the social hall to be used for all of the synagogue’s activities. The board then made the decision to demolish the synagogue in April.

The bulk of those demolition costs were covered by the State of Israel’s “touching” donation, said Levy. 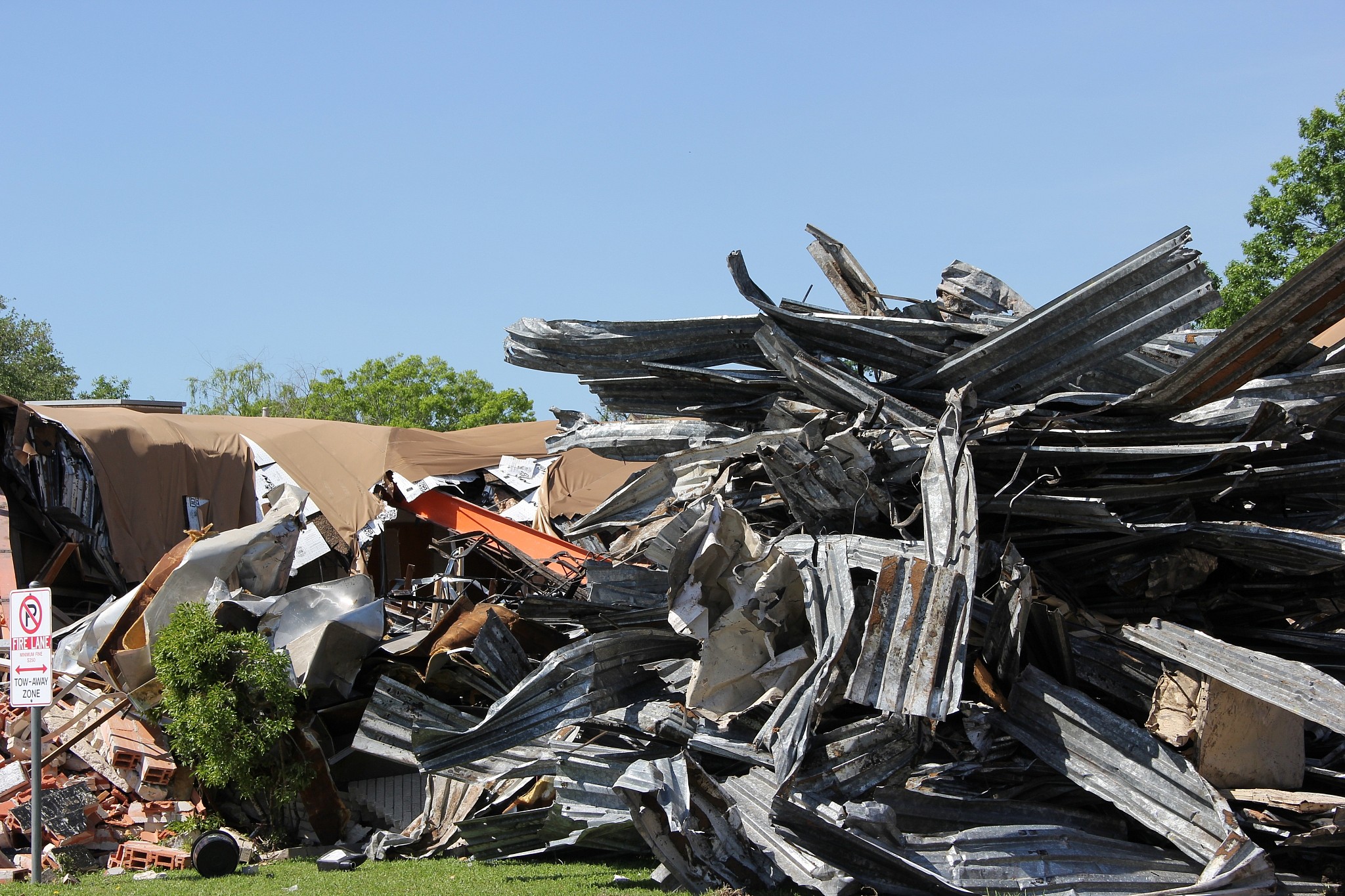 UOS decided to demolish the synagogue after Hurricane Harvey. (Tracy Frydberg/Times of Israel)

To outsiders, relocating the community to dryer ground might seem the most reasonable solution. Yet moving an Orthodox community, which requires living within walking distance of a synagogue and in close proximity to Jewish grocery stores and schools, provides a unique challenge.

Levy said what is certain is that if the synagogue does move, it won’t be far.

“Right now we are looking at two serious options: to either rebuild on the existing property or move probably about three-quarters of a mile south of where we are [within] the eruv,” he said. He noted that to ratify the “south option” requires the approval of two-thirds of the membership.

Rebuilding on the existing property would require raising the new synagogue about 10 feet above the ground, at significant additional cost. Some families in the neighborhood, who just finished raising their homes five feet off the ground after the last flood, were flooded again during Harvey.

The aftermath of Hurricane Harvey has been “emotionally traumatizing” for the nearby Conservative synagogue, said Congregation Beth Yeshurun Rabbi David Rosen.

For the first several months Beth Yeshurun, which boasts the largest congregation in Houston, worshipped with the neighboring Conservative synagogue, Congregation Brith Shalom. Three months ago it returned to its own building amid ongoing construction. 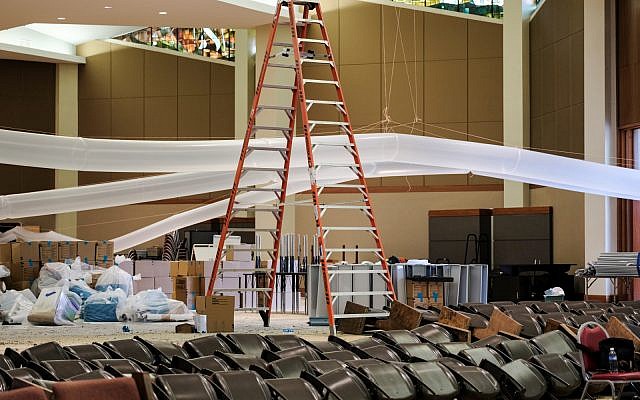 Rosen is retiring as senior rabbi this summer.

“To lose my congregation and my home in one year has been painful and emotionally difficult. In a way, it has brought me and the congregation closer together because this is not just the rabbi helping the members but the members helping their rabbi,” he said.

A few UOS families decided to emigrate to Israel after Harvey. While the Federation doesn’t have exact numbers, it said the number of families leaving town due to flooding is very low.

As the Jewish community commits itself to rebuilding, the focus turns to growing and sustaining Jewish life.

Federation CEO Ingber said the financial impact of Harvey could take many years to recover from, noting that New York’s Jewish Federation only recently closed their last case file from 2012’s Hurricane Sandy.

According to Conservative Rabbi Rosen, “We don’t don’t yet know the financial extent of the impact on the synagogue because members have the whole Jewish year to meet their financial obligations.” He added, “The impact is potentially long-term. We suspect that a number of our families will not be able to meet their obligations this year.” 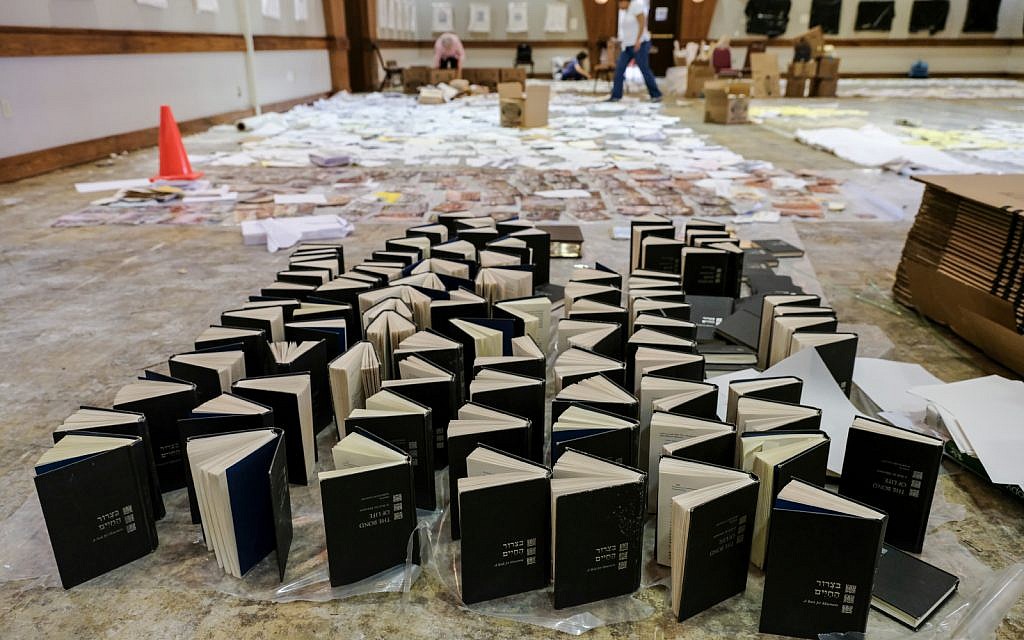 With Jewish community members seeking substantial financial support and leeway from schools and institutions, Houston’s Jewish infrastructure requires more donations than ever to assist their members and to fix their own buildings. Obtaining outside donations is crucial, said Ingber.

Looking at how to preserve Houston for future Jewish generations, Federation staff member Saratovsky said, “We know that flooding will continue to happen… But the question becomes how do we live with it, how do we manage it, how do we ensure that our families and our institutions are prepared, and what does our community have to look like?”