Hyperbole was the word of the day as news of a unique Israeli archaeological dig hit international headlines this month.

Standing next to his Tel ‘Eton excavation on a straw-covered hill in the southeastern part of Israel’s Judean Shephalah (lowlands), a little over 20 miles southeast of Ashkelon, Bar-Ilan University Prof. Avraham Faust describes with disbelief the media storm of misquotes and half-understood facts surrounding him for the past two weeks. “It’s been a real learning moment,” said archaeologist Faust.

The eye of the tornado? The publication of results garnered from carbon-dating a few olive pits and charcoal uncovered in the foundations of a rare complete massive Israelite building that once towered over the hilltop.

Even today, under a deceptively hazy sky where a welcome breeze blows occasionally during our three hours at the hill’s lookout, the outline of the 225 meter squared structure is readily impressive, with its 750 kilo sophisticated chiseled “ashlar” cornerstones, to its skeletal, multi-room divisions that illustrate the practical uses of its stone-walled spaces. 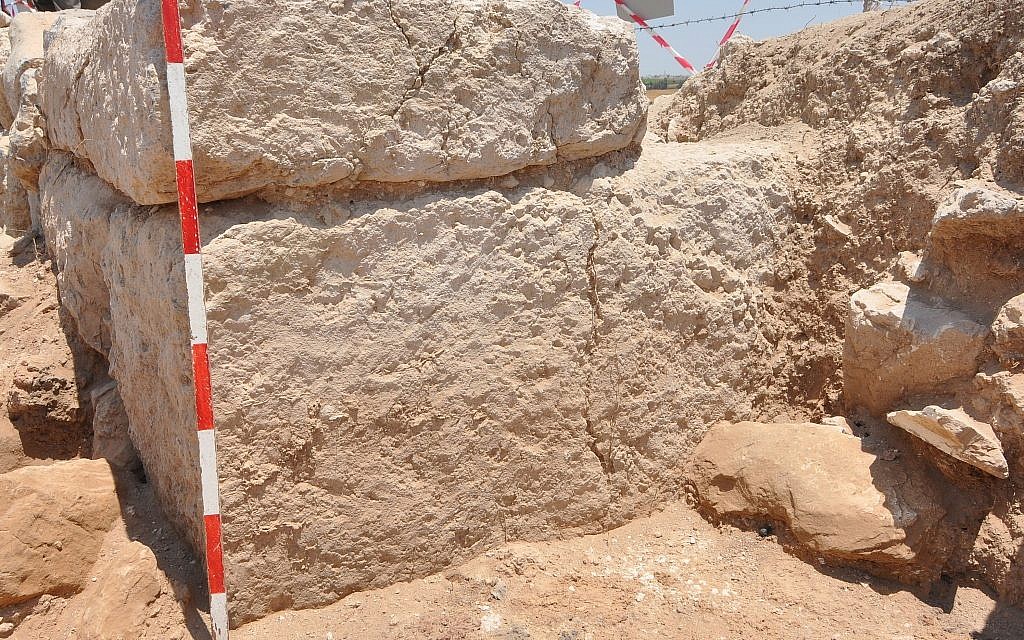 Here, points Faust, was a storage room, where the team discovered 39 vessels that, upon the house’s destruction in the 8th century, probably contained wine and oil.

Holding a randomly picked-up shard from the lip of a large pot at just the right angle, Faust gestures in a circle with his other hand to conjure up and complete its circumference. Skipping to another, more interesting find, he explains how two differently shaped funnels were discovered at the site in separate storage areas. Knowing what was stored in each led him to understand their differing shapes: one funnel was used for grain, and one for liquids.

“About the destruction alone, I could speak a year,” said Faust, perhaps only slightly exaggerating. Among the most interesting destruction layer finds include loom weights; seals; botanical remains such as wheat, grapes, olives, lentils, and garlic; and dozens of arrowheads.

“The fact that the house was discovered in its entirety allowed us to reconstruct life in the house in a way that was not possible before,” said Faust.

Faust’s team has nicknamed the structure the “Governor’s Residence.” Undoubtedly an elite domicile, it is considered a “four-room house,” the most typical Israelite architectural form. According to Faust, who said he has studied over 150 similar “four-room” structures (which are usually around 40-70 meters squared), the size alone puts it in the top 1 percent of such houses. 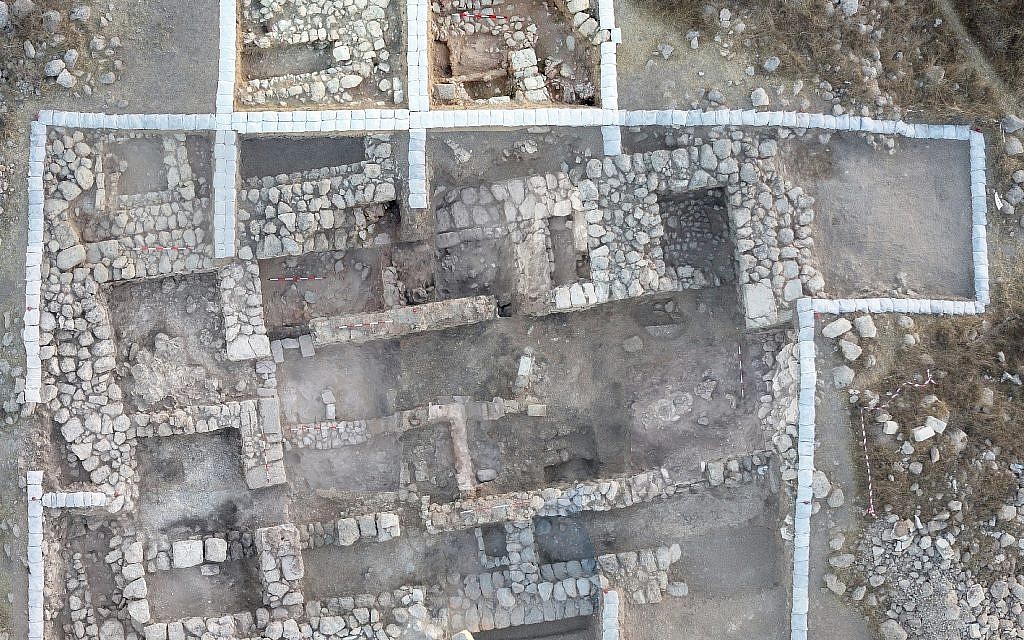 Beginning in 2006, the archaeologists have spent over a decade meticulously excavating, digging up to 1.8 meters deep, and analyzing the house’s 500 artifacts. Inside the house, researchers have discovered several phases — from its 8th century BCE fiery destruction by the Assyrians, down to its earlier, somewhat controversially dated, foundations.

The results — late 11th century to the third quarter of the 10th century BCE — were unexpected, said Faust.

Analysis of the organic material indicated the formerly regal residence’s foundations dated to the presumed dawning of the biblical United Monarchy, the kingdom ruled by Kings David and Solomon. 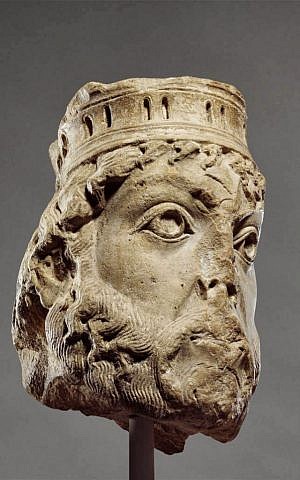 “The youngest possible date for the construction, within the 2σ Calibrated Age Range, is 921 BCE, thus apparently ruling out any construction date which is later than the time of the United Monarchy (from the first half of the 10th century to around 930 BCE),” wrote Faust and fellow Tel ‘Eton researcher Dr. Yair Sapir in the scholarly Radiocarbon journal.

Archaeological evidence of this era is rare, and most excavations in the region have only yielded significant amount of finds from the 8th and 7th centuries BCE.

“One of the main points of the discovery is that it refutes the claims that complexity was reached in Judah only in the late 8th or 7th century BCE,” explains Faust.

The construction at Tel ‘Eton, one could now argue, corresponds with the United Monarchy’s timeline, as depicted in the Bible.

Let’s do the time warp

Some assign Tel ‘Eton to be the biblical city Eglon. As recorded in the historically dubious Book of Joshua, after the Israelites had conquered the indigenous settlers in Canaan, the 12 tribes divided the land. Among the defeated Amorite cities listed in Joshua 10 is Eglon, which is presumed to be in the trough valley area of Tel ‘Eton, near an important junction between the north-south road connecting the Beersheba valley and the Ayalon valley, and the east-west road between the coastal plain and Hebron. The entire lowlands region was in violent flux.

“The identification of Tel ‘Eton as Eglon is based on its location on the road leading from Lachish to Hebron, but there is a wide agreement that the story of the conquest itself is ahistorical, and hence there is no much point in trying to correlate the finds in the dig and the biblical story,” said Faust.

Centuries later, the remains of the tensions between the indigenous Canaanite settlers, the Philistines, and other Sea Peoples often at war with them and the colonizing Israelites have been amply illustrated in other archaeological sites in widespread layers of destruction. 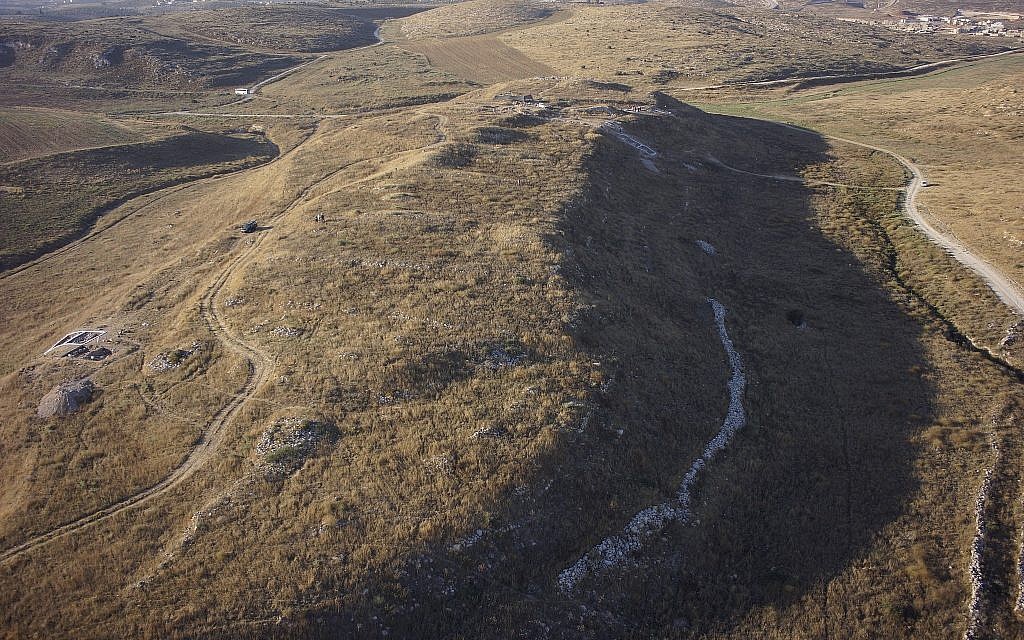 The 15 acre-Tel ‘Eton site was inhabited continually from the Late Bronze Age (1550–1200 BCE) to the Iron Age IIB (8th century BCE). At its height, Faust estimates that some 1,800 people could have lived in the walled city.

Its transition from a Canaanite to an Israelite settlement is not evidenced through violence. Rather, it seems there was a seemingly peaceful assimilation of the locals into Israelite or “highland” society. 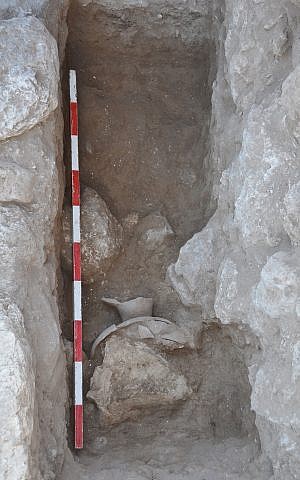 The Governor’s Residence exemplifies this transition. A typical “four-room” residence, its architectural design is almost never found at settlements that are not identified as Israelite. In its foundations, however, was discovered a large chalice — what is called a “foundation deposit” — which is considered a Canaanite building ritual.

Faust said that the use of what is considered a “Canaanite” tradition within what is usually viewed as an “Israelite” house exemplifies the nature of the transition. The house appeared originally in the Iron I period (1200–1000 BCE); its form crystalized as a standardized four-room residence only around the beginning of the Iron II (which spanned from 1000–925 BCE).

“The house at Tel ‘Eton is one of the earliest known examples of the standardized [Israelite four-room] form. I think it was built as part of the incorporation of Tel ‘Eton within the Israelite sphere of influence,” Faust told The Times of Israel in a follow-up email. “The form of the house is clearly associated with the highlands, whereas the deposition of the foundation deposit – which is a Canaanite tradition – symbolizes the cooperation, i.e., that this incorporation was done by agreement.” 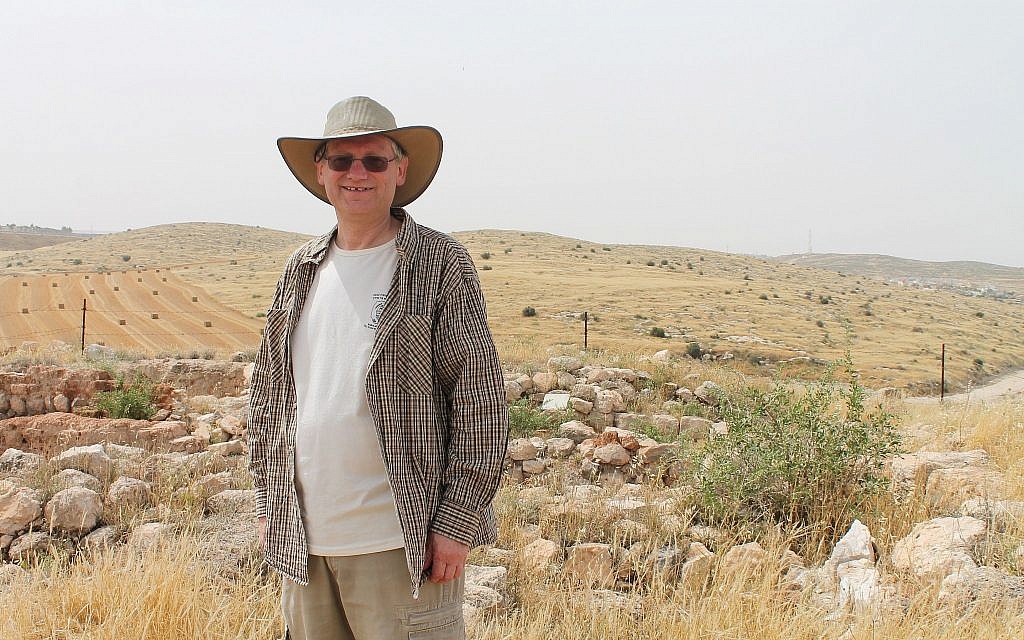 Additionally, write Faust and Sapir in the Radiocarbon journal, “Since the settlement at Tel ‘Eton expanded significantly in size during the Iron Age IIA, the combined evidence suggests that the settlement was transformed from a village into a central town with a city-wall and a residency with ashlar blocks, at some point in the late 11th or (more likely) the first half or three quarters of the 10th century BCE.”

There are other settlements in the area which also support a much earlier dating for the a Israelite kingdom.

“About 10 years ago there were no clear indications for settlements in Judah in the 10th century BCE,” Prof. Yosef Garfinkel, head of the Archaeology department at the Hebrew University in Jerusalem. “The big revolution was in 2008 when we got the first radiometric dates from Khirbet Qeiyafa. By now we have from Khirbet Qeiyafa nearly 30 samples, indicating a date between 1000-970 BC, the time of King David.”

Garfinkel told The Times of Israel that he also has several more radiometric dates, which have not yet been published, from the 10th century BCE, from two other sites he excavated in the last few years: Tel Lachish and Khirbet al-Rai. According to Faust, excavations in Beit Shemesh also exhibit early dating.

“So it is not surprising that there is such an early date from Tel ‘Eton. I hope that further excavations at the site will uncover a real level, buildings and pottery assemblages, from the 10th century BCE,” said Garfinkel. 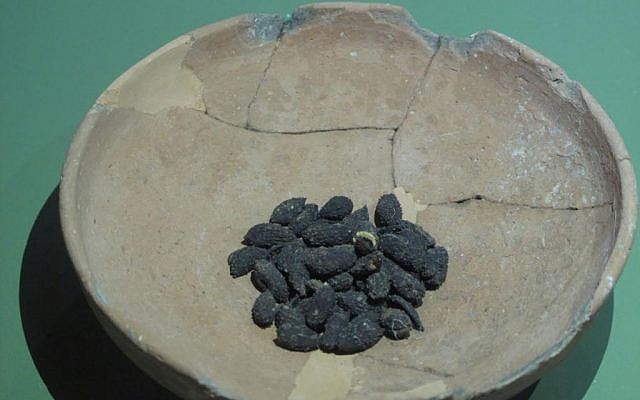 For one leading archaeologist, the early dating is still extremely surprising — and rejected.

“The single olive pits used to establish the (ostensible) date of construction come from fills,” explains Tel Aviv University Prof. Israel Finkelstein in a brief email. “The only thing that can possibly be said is that the building postdate these samples. In other words, they have no importance whatsoever for dating the early days of the structure.”

Finkelstein said that at his current excavation at Megiddo, similar samples such as single items or items from fills “are usually not collected and when collected are not being sent to the lab to be dated, because they enter bias into the dating system.”

“So needless to say, there is no connection whatsoever between the finds at Tel ‘Eton and the biblical description of the United Monarchy,” said Finkelstein. 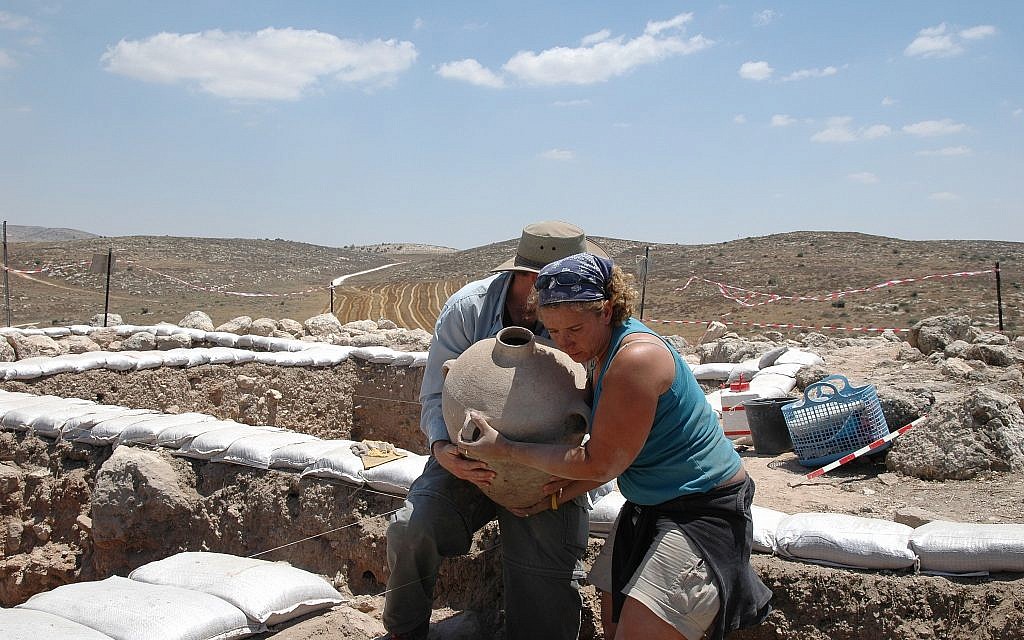 Faust is used to such criticism. At the excavation site, he pointed out the three separate locations from two areas where his samples were taken. They are about a dozen meters apart.

“If the dating is coincidental, then why does it come up the same from all samples?” he asks.

As far as the claim some make that the material is residual, he deflects the assertion and says, it “came from clear and good contexts, including from within the foundation deposit itself, and from within a material that was purposely prepared for the floor make-up of the building. It was not randomly collected from elsewhere.” 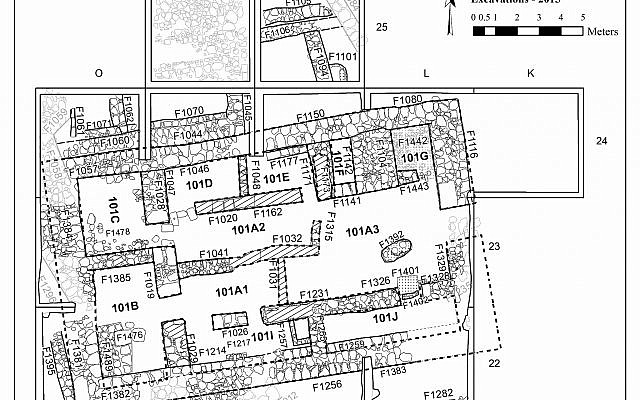 The paucity of finds from building’s earliest dating is to be expected, said Faust. “One cannot expect clusters of material from the foundation, and if one wishes to study only clusters one creates a biased sample that includes almost only destruction events,” he said.

But there was no disaster hermetically sealing that early period. And the house, the home of societal elites, was in constant use for hundreds of years — and constantly cleaned. If, for example, something was broken, it was carefully disposed of, usually outside of the domicile.

In the Radiocarbon article, Faust and Sapir calls this the “Old House Effect”: archaeologists usually find thousands of artifacts from destruction layers, but very little from the decades and centuries that preceded the destruction. The picture is therefore greatly biased towards some periods, said the authors, whereas others are hardly known. Comparing the number — or grandeur — of the finds from these periods may obfuscate results and create false conclusions that the society of the latter era was not complex, they said.

It was, however, a simpler time: Much like the modern Kibbutz movement, the Israelite society of the day eschewed ornate and flashy objects. “There was an ethos of simplicity,” he said. 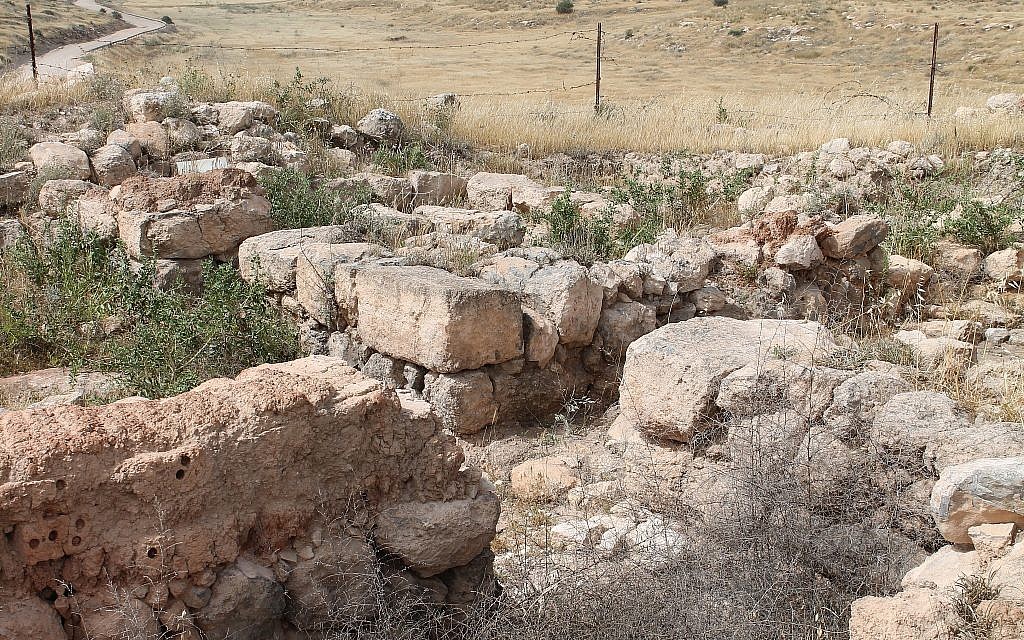 The layout of the house also speaks to the lack of hierarchy in that there was a common courtyard from which the rooms branch off. In an article, Faust and his co-author Tel Aviv University Prof. Shlomo Bunimovitz write, “We believe that the four-room house embodied Israelite society and values and can be seen as a microcosm of the Israelite world.”

But does the house, or Tel ‘Eton itself, prove King David?

In a Bar-Ilan press release, Faust and Sapir clearly state, “the association with David is not based on direct archaeological evidence, but solely on circumstantial grounds.”

However, they add, “If someone thinks that there was no king by the name of David, we should find another name to call the highland king in whose time the region was incorporated into the highland kingdom.”