Illustrative: Border Police carry away a member of the "hilltop youth" during an evacuation of an illegal outpost in the northern West Bank. (Credit: Zman Emet, Kan 11)

Security forces before dawn on Tuesday demolished the Evyatar outpost, an illegal outpost re-established in the northern West Bank in memory of Raziel Shevach and Itamar Ben-Gal, who were murdered by Palestinian terrorists earlier this year.

Settlers charged that the move, which included the demolition of several makeshift structures where several young families and youth had been living for nearly two weeks, was coordinated with neighboring Palestinians.

The Israeli minors were arrested during the operation.

On Monday evening, the Facebook page for the adjacent Palestinian village of Beita posted that it had received assurances from the IDF several days earlier that near the outpost, near the Tapuah Junction, would be razed.

“I hope that this is a lie and that no element in the State of Israel is coordinating the uprooting of Jews with a village of murderers. We are looking forward to receiving a clear answer on the matter and to being informed that there is no truth to the claims,” he said.

Tzvi Succot of the far-right Otzma Yehudit group had published the Beita Facebook post ahead of the evacuation and called the actions of Israeli security forces a “literal encouragement of terrorism.”

“The fact is that for a long time now there have been violent riots in that village. In return the army promises to evacuate Jews and keeps that promise? It is intolerable,” he said in a Tuesday statement.

The Evyatar outpost was first established several weeks after the April 2013 murder of Evyatar Borovsky, a father of five from the settlement of Yitzhar, by a Palestinian terrorist at the Tapuah Junction.

Security forces first evacuated the outpost two weeks later, and, according to the settlers, it remained uninhabited until its reestablishment several weeks ago.

Several days after the fatal stabbing on February 5 of Ben-Gal, a father of four from the Har Bracha settlement, a group of settlers from the northern West Bank decided to rebuild it in his memory, as well as in commemoration of Raziel Shevach.

Shevach, a father of six from the Havat Gilad outpost in the northern West Bank, was gunned down by Palestinian terrorists in a drive-by shooting outside his community on January 9.

Ben-Gal was killed by a Palestinian terrorist while trying to hitchhike at the Ariel Junction in the central West Bank. His killer is still at large. 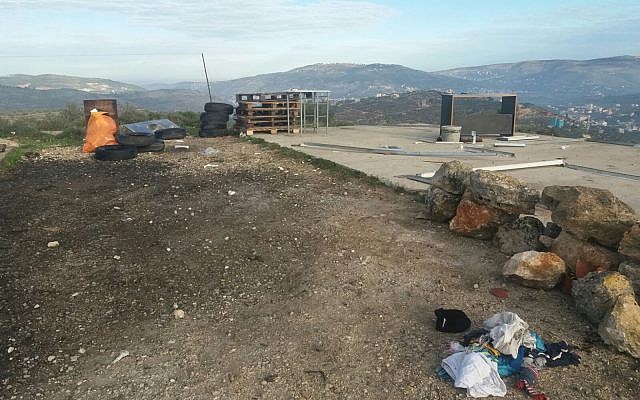 The land adjacent to the Tapuah Junction in the northern West Bank where the Evyatar outpost stood prior to being razed hours earlier. (Courtesy: Tzvi Succot)

A spokeswoman for the Civil Administration, the Defense Ministry body responsible for carrying out the demolition, said the claim that the evacuation had been coordinated with the Palestinians “does not even merit a response.”

While the Civil Administration refused to provide any details on the evacuation, one security official told The Times of Israel that the settlers had thrown stones at the soldiers and poured oil on the road surrounding the outpost in an effort to prevent the troops from carrying out the measure.

After the evacuation, a number settler youth descended on the nearby Tapuah Junction and began hurling stones at passing Palestinian vehicles. One of them cracked the windshield of Rabbis for Human Rights field worker Zacharia Sadeh, whose dashboard camera captured the incident.

“It was only by miracle that the attack did not end with more serious results,” he said.