Avri turns the volume up from loud to deafening. I bang on his locked bedroom door with the hand holding my new copy of Fly Already.

“What the hell is going on in this house?” Etti shouts as she comes home from work. “Can’t a person get a little peace and quiet after a long day?”

I emerge from the hallway, intending to shout back, but instead I just stand there. I can’t speak because of the tears in my eyes. Etti looks at me in alarm, puts down her briefcase, and comes up close to look at me. She glances at the book and puts a soft hand on my cheek. “Shaul,” she murmurs, and somehow I can hear her over the din.

“Avri, can it!” she shouts. “You’re making your father feel like he’s living in an Etgar Keret story!” There is no indication that Avri hears her, or that if he does, that he cares.

“But listen to it,” I say, choking back my words.

“Neil Young.” She performs a search of her brain. The message on her face is “no results found.”

“Oh. I thought it was a high school girl with a bad voice.”

“But only love can break your heart / Try to be sure right from the start,” I chant softly along with Avri’s speakers.

“Maybe Nitzan broke up with him?” She sighs and signals me to follow her into the kitchen. “Good if so. Fourteen is too young for a girlfriend. I need some coffee. Have the neighbors complained?”

“You don’t understand. It’s Neil Young.” I stand in the kitchen door, bracing the doorway as if it is still standing only because I am holding it up. She shoots me a questioning glance.

“My Dad forbade me to listen to Neil Young. He said that when he was young it was the music he put on when he wanted to commit suicide.” 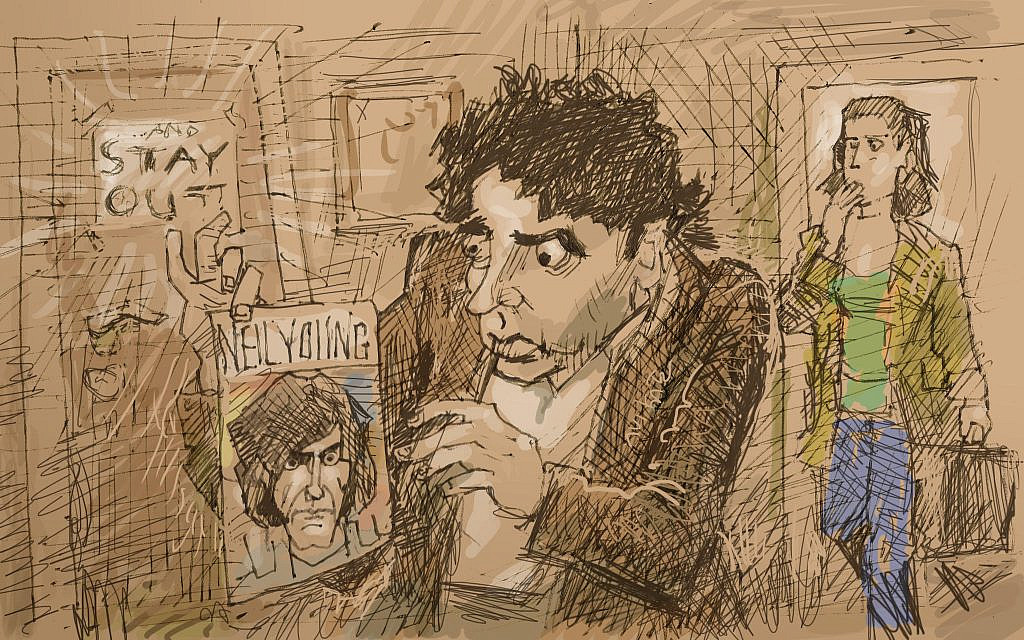 I point to the roiling electric kettle, as she cannot possibly hear its squeal over the music. Etti nods. Turning slowly, as if she were still in a morning’s half-awake state, she measures a teaspoon of instant into her mug and then pours water nearly to the top. “I have a friend I’ve never seen,” Neil warbles, “He hides his head inside a dream.” She opens the refrigerator door, surveys its contents carefully, takes out a milk carton, and pours a smidgen to lighten her cup.

“‘Seen’ doesn’t really rhyme with ‘dream,’” she notes as she leans back against the countertop and takes a sip.

I lower my arms, shrug, and turn around.

“Where are you going?”

“To find a circus and volunteer to be shot out of a canon. It would be easier than living in this family.” I feel her eyes on my back. They force me to turn back to her. She takes a step forward to embrace me, but just at that moment Neil Young goes silent and a breeze wafts cannabis aroma into the kitchen. I run for the hallway and see Avri’s door open just a crack. All I can see of him are a pair of dark, dilated pupils.

“Just let me have a word with you,” I plead. “And where’s the grass from?”

“From a lawyer. Dani Korman’s Abba. Good enough for you?”

“Listen, I need to talk to you about Neil Young.”

He shouts “Mom!” and slams the door shut.

“Let me take care of this,” she whispers in my ear, at the same time propelling me away from the door and back down the hall to the living room. I collapse into my armchair and close my eyes. I hear Avri’s door open and then close, gently. “Someone should call him / and see if he can come out / try to lose / the down that he’s found.”

I gaze out the windshield, afraid to look at my Dad. The Greatest Hits cd I’d slipped into the player just a few minutes ago had popped out at Dad’s order. “You are never to listen to Neil Young. Is that understood?” he had decreed just a minute before.

“But why?” I had cried out, with all the hurt of a boy who a minute before thought he would get a smile and praise from his father for his enthusiastic discovery of songs that his Dad must have grown up on. His answer left me with tears in my eyes that I did not want him to see.

After a few minutes, I could stand the silence no more.

“You wanted to commit suicide?” I said in a small, still, but also angry voice. It stung to be so aware of what that might have meant for my entire existence. But more than that, I was angry at him for having almost succumbed to the youthful melancholy I felt weighing down on me so heavily. It was mine, and he was supposed to be my support, even when I told him I hated him.

He kept his eyes on the road. “Doesn’t every kid when he’s seventeen?”

Of course, I listened to Neil Young’s Greatest Hits endlessly, until I knew every song there, and on every other album of his by heart. Including the Buffalo Springfield ones.

I feel Etti’s hand on my shoulder. She pulls up the other armchair and sits down close to me. Instead of Neil Young, trance music of some sort, at a more or less reasonable volume, emerges from Avri’s room.

“What did you tell him? What did he say?”

“I told him not to listen to Neil Young. He said that he hates you.”

“Doesn’t every fourteen-year-old declare that he hates his father?”

The tears are flowing now. “Why does it have to be so fucking hard to be loved by my son?”

“‘Only love can break your heart,’” she quotes, as she pries Fly Already free of my grip. “But, really, Shaul. I forbid you to read Etgar Keret.”