LONDON — On February 9, 1943, Transport 46 left the Drancy concentration camp on the outskirts of Paris bound for Auschwitz. Among the 1,000 deportees being carried to their deaths was 73-year-old Aaron Ianco.

Seven decades later, Ianco’s great-grandson, British photographer Marc Wilson, began a project that would see him crisscrossing Europe to capture images that tell not just his own family’s tragic story, but that of 21 others.

Launching October 21 in London, Wilson’s 750-page book, “A Wounded Landscape: Bearing Witness to the Holocaust,” contains over 350 stunning and haunting pictures taken at 130 locations in 20 countries. Those images include once-vibrant but destroyed communities, former ghettos, and the scenes of both individual killings and industrial-scale slaughter. They are interspersed with transcripts of Wilson’s conversations with survivors and their families.

Wilson, who has worked as a professional photographer for 25 years, admits that he wavered for many years before embarking on the project. 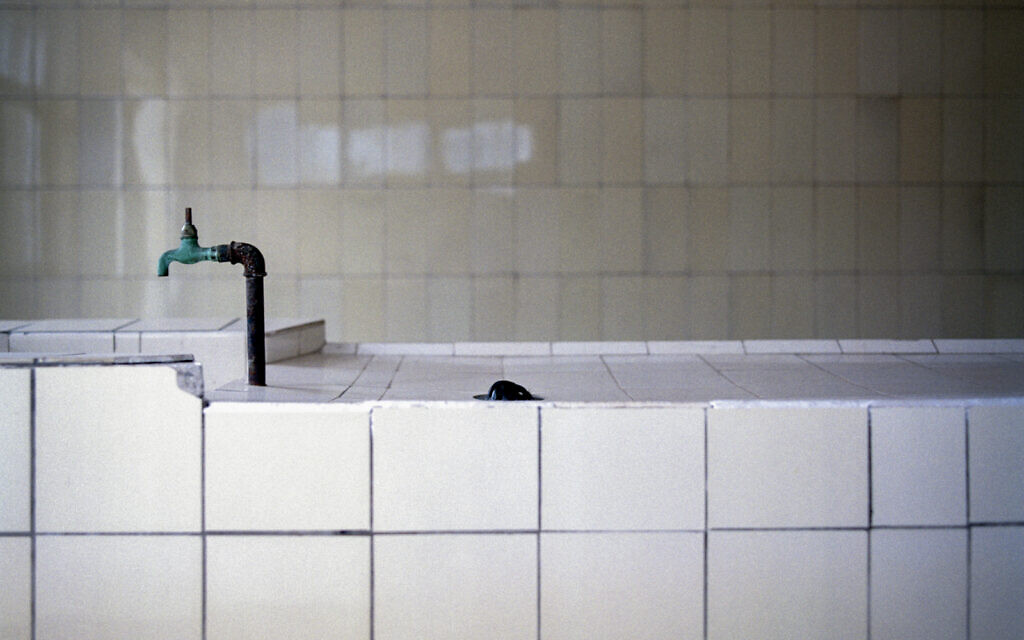 Detail of a photo of an autopsy table at the Buchenwald concentration camp in Germany, taken in 2018. From the time of the Kristallnacht pogroms in November 1938, over 56,000 of the 280,000 prisoners kept there were murdered, including 8,000 Soviet soldiers. (Marc Wilson)

“This was a subject that I knew was important in general and that I knew was important in terms of my own culture, my own family as well,” he tells The Times of Israel. “But I never felt I was good enough to make it. I didn’t feel I was good enough as a photographer. I didn’t feel I had the right visual language within me to give this subject the imagery it deserved and the sensitivity it deserved and the importance that it deserved.”

But Wilson’s feelings began to change in 2014 after he completed “The Last Stand,” a four-year project documenting some of the physical remnants, such as military defense structures, of World War II on the coastlines of the British Isles and northern Europe. The images he produced — “soft, gentle and sensitive and hint[ing] at history” — persuaded Wilson he was perhaps ready to think about work focused on the Holocaust. Nonetheless, he says, while he knew the history, he remained unsure “how it would affect me not as a photographer, but as an individual.” 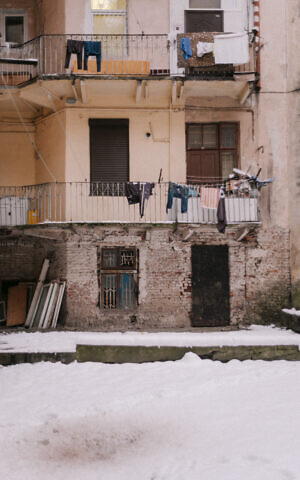 At the first location he visited, the Rivesaltes internment camp in southern France, Wilson realized that the approach he’d adopted for “The Last Stand” — detached, standing at a distance and photographing sites in the landscape around them — wouldn’t work.

“Those first images left me so cold that I knew this was completely wrong,” he recalls. Instead, he recognized, he needed to “literally and metaphorically” step over the barrier that had kept him outside the camp.

Visiting the Rivesaltes the next day, Wilson sought out K12, the children’s barracks. His mother’s cousin, who works with Holocaust survivors in Geneva, had told him that it still contained the traces of pictures painted on the walls by children using materials given to them by the Swiss Red Cross. The project, Wilson decided, would have to be intimate and subjective, and told through individual stories.

“I was basically told by the space how to make this work,” he says. 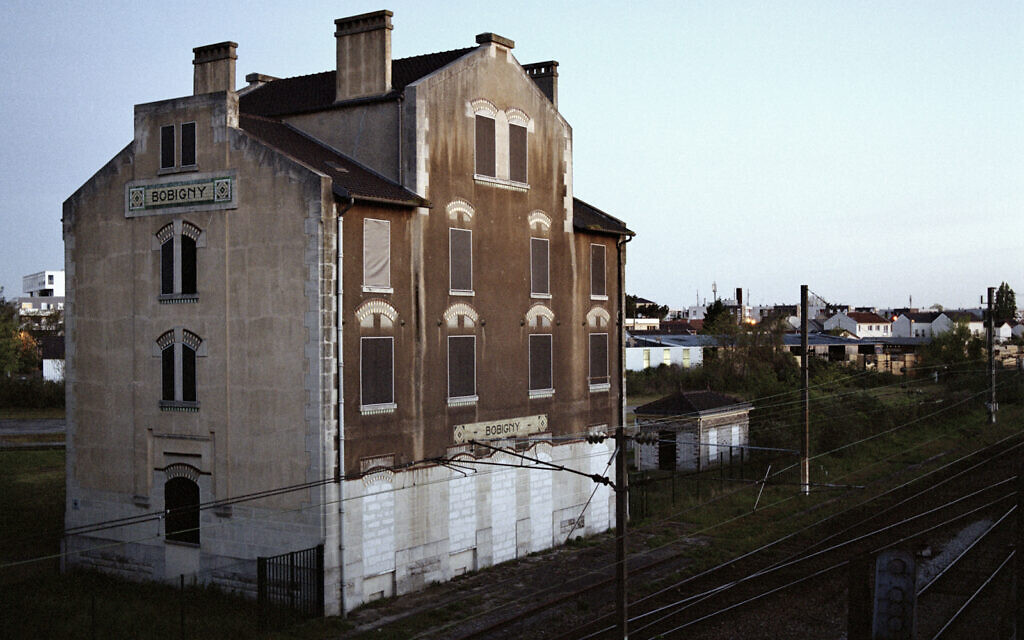 Detail of a photo of Bobigny station in Paris, a point of transport from Drancy to Auschwitz, 2016. (Marc Wilson)

The first story Wilson embarked upon was that of his great-grandfather, a Romanian Jew who had gone with his family to live in Paris in the 1930s.

“I didn’t choose my family story because that was the most important one to me. In some ways I chose it because that was the easiest to access,” Wilson says. “I knew very little [about it] because it wasn’t something we really spoke about… but I knew there was something there. I didn’t feel like it haunted my childhood in any way, like it was an overbearing period of history that was unspoken.” 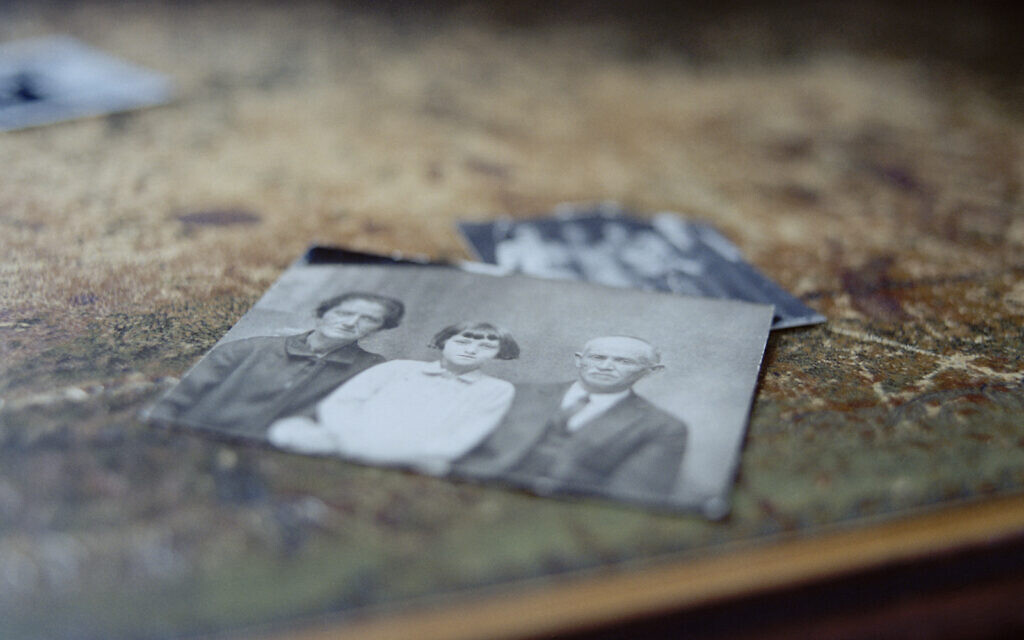 Aaron Ianco was transported from Drancy to Auschwitz in Transport 46 on February 9, 1943. (Marc Wilson, London, 2017)

In the book, Ianco’s story is told by snippets from a conversation Wilson had with his mother, Eliane (unlike more than 40 other members of her family, Wilson’s grandmother survived the Holocaust thanks to her marrying a Swiss man and moving to Geneva before the war). There are photographs of Drancy, the old station at Bobigny in Paris where Ianco’s transport left for the East, and documentation bearing his name along with the selection ramp he took and gas chamber he was murdered in at Auschwitz.

But Wilson never wanted the work to just be about his family. “I’ve never wanted to place greater importance on one individual over another, whether they’re my own family or a stranger,” he says. “They were equally important. And whatever their experience, it was equally devastating, wherever they were taken to, wherever they came from.” 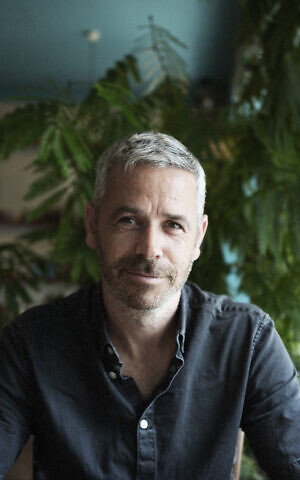 Instead, Wilson says, he has always seen his own family story as simply “one of the 22 stories in this piece of work and these 22 stories, obviously, [are] representative of millions of stories.”

Each of the stories featured in the book is connected to, or evolved from, Wilson’s work on another. For example, while researching a story in Israel, Wilson struck up a conversation with a woman on a bus as he traveled from Tel Aviv to a kibbutz. She had worked with a group of Holocaust survivors and asked Wilson if he would like her to find out whether any would like to speak with him. A number of stories in the book flowed from that conversation.

“The story was always coming from the person,” says Wilson. “It was always someone wanting to share their story with me, which was really important to me because I never wanted to coerce or push.”

Wilson consciously doesn’t refer to having interviewed people for the project. “I feel I’ve had 22 conversations and my role has been to listen to them. I never had any preprepared questions for these people at all because I wanted them to tell me what they felt comfortable telling me on that day,” he says. “I found early on that by listening as opposed to asking, I would get all the information — not the information I wanted, but the information that they wanted to give me, and that’s the only thing I ever wanted to show in this book.” 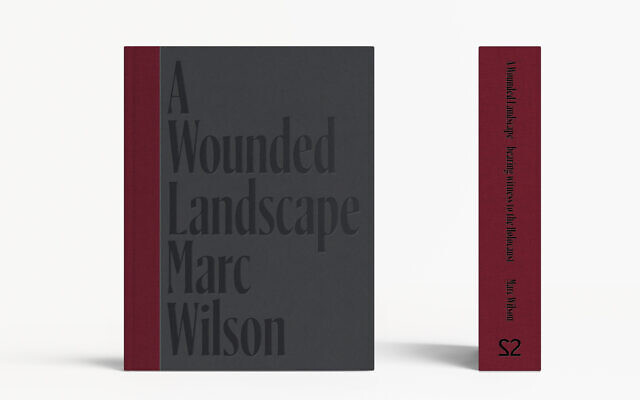 As Wilson notes, while none of the people whose stories he features knew each other during the war, many of them are, of course, connected by location. Reading the book, there is a grim familiarity to these locations and the stories of roundups, camps and death marches. But each has its own unique element and retelling.

Noga, from Nir David in Israel, for instance, recalled how her grandfather, a carpenter, saved his family from being deported from Theresienstadt to Auschwitz. Hauled off of a transit because the commandant wanted him to finish an item he had been working on, Noga’s grandfather said that if the Germans wanted the job finished, his whole family had to be taken off the train, too. 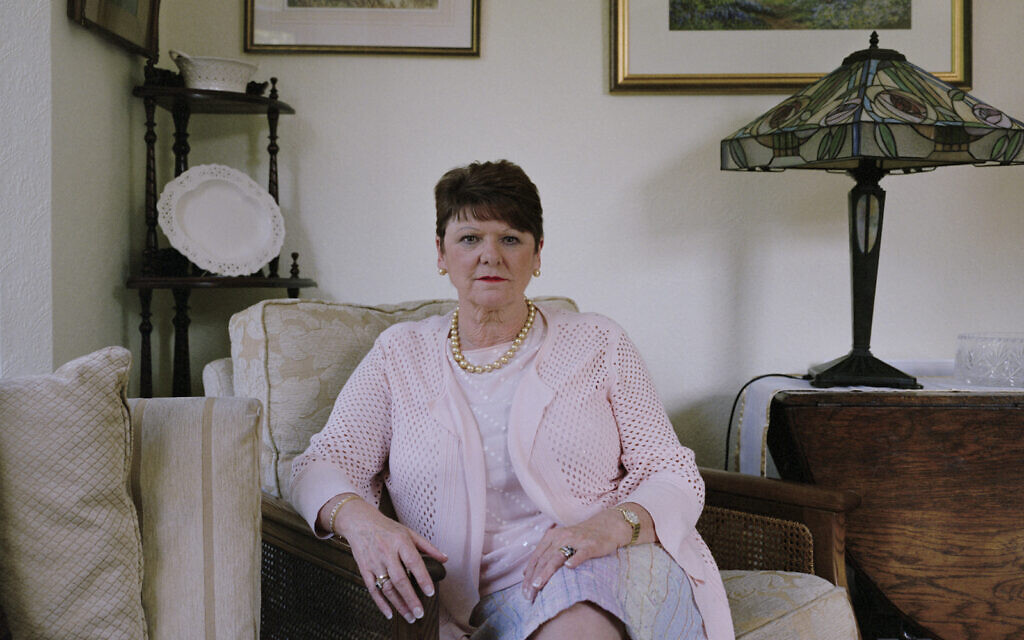 In Leeds, a city in northern England, Lilian Black told Wilson about her father, Eugene, who survived Bergen-Belsen, Buchenwald, and, unlike his family who were murdered there, Auschwitz. Upon his death, Lilian complied with her father’s request to scatter some of his ashes at Auschwitz so that he could be with his family again. “That was a bloody tough one was that,” she said.

And in London, Harry Mans, who has since died, recounted the families in Holland who sheltered him before he ended up hiding with 11 other Jewish children in a water tower in Brunssun. “From time to time when it was a dark evening Willie [who looked after them] used to divide us into two groups and take us out for a walk in the surrounding countryside, sticking mainly to the woodland,” he told Wilson. “Each group was taken out on a different evening. It was midwinter and very cold. As we were walking we could hear the ice cracking under our feet. Speaking or even whispering was not allowed.” 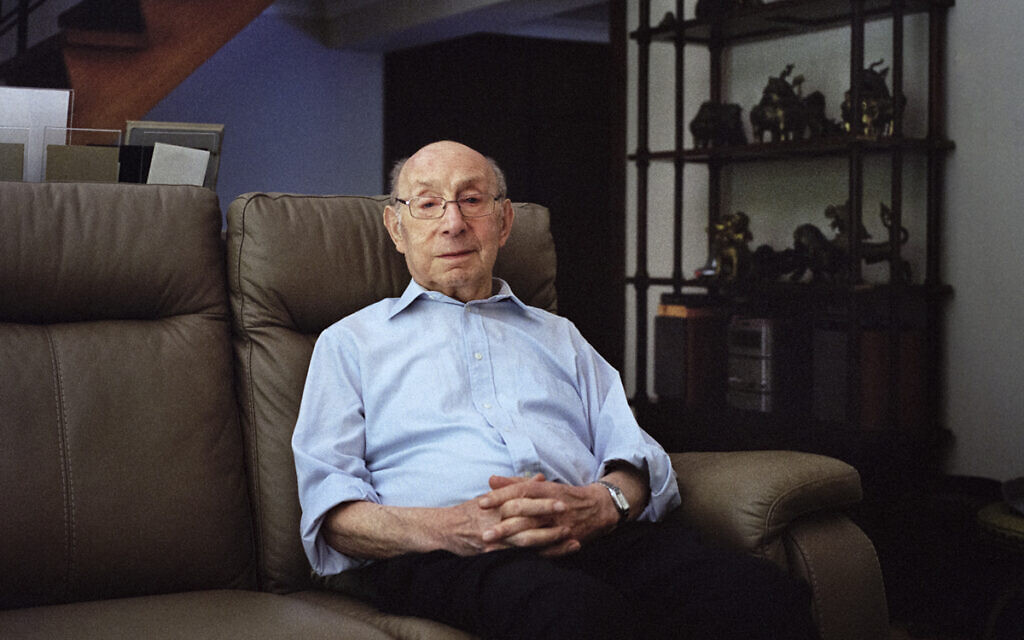 Wilson acknowledges that he found the project desperately hard at times. His voice features hardly at all in the book, although a brief opening passage in which he describes a visit to Pudu Turcului in Romania — a “dusty and dirty” village — in search of his great-grandfather’s roots conveys his emotions. “I was angry, I was full of hate, but above all, I was simply sad, lost,” he writes.

Wilson recalls that “there have been some very specific moments over the last six years when I’ve seen things that have brought me to tears, looking through my camera crying. But I’ve never not taken those pictures, because I have to take them.” 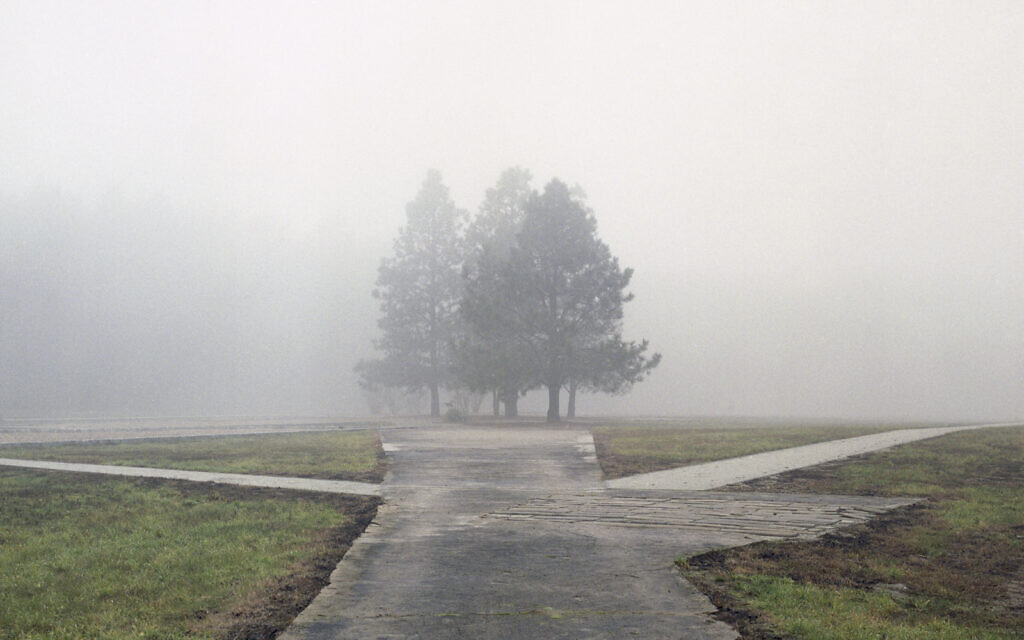 There were, he adds, moments when, confronted with a terrible sight or story, he wondered whether he could carry on. “But the answer was always yes,” he says, “for the simple reason that I’m free and I’m alive and I’m able to see these things, I’m able to go to these places and walk away from them… and so it’s my responsibility to make this work.” 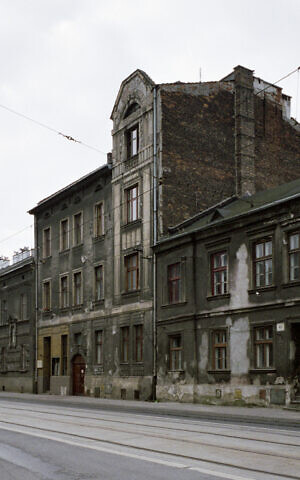 Detail of a photo of a ghetto street, Krakow, Poland in 2020. (Marc Wilson)

Wilson describes his work as focused on “landscape, history and memory.” He says the “moments of grief” he frequently experienced on his return to Britain from a trip abroad most often stemmed from the fact that the places he had visited were connected to one of the 22 stories.

“If you go to these locations and you have knowledge of an individual [who] was there it becomes so much more powerful in that way,” he says.

It’s that power that he hopes readers of the book may experience if they then visit the locations.

“It makes it much harder to deal with, but it makes it a much stronger emotion, which means that I hope people will learn more and it will stay with them for longer,” Wilson says.

But there is also a simpler, yet perhaps more profound, message that Wilson also wants the stories of the individuals featured in the book to convey: “The aim is to make the reader aware of how amazing, but how like us, they were and how like them we are, and how easily these people could be us as well.” 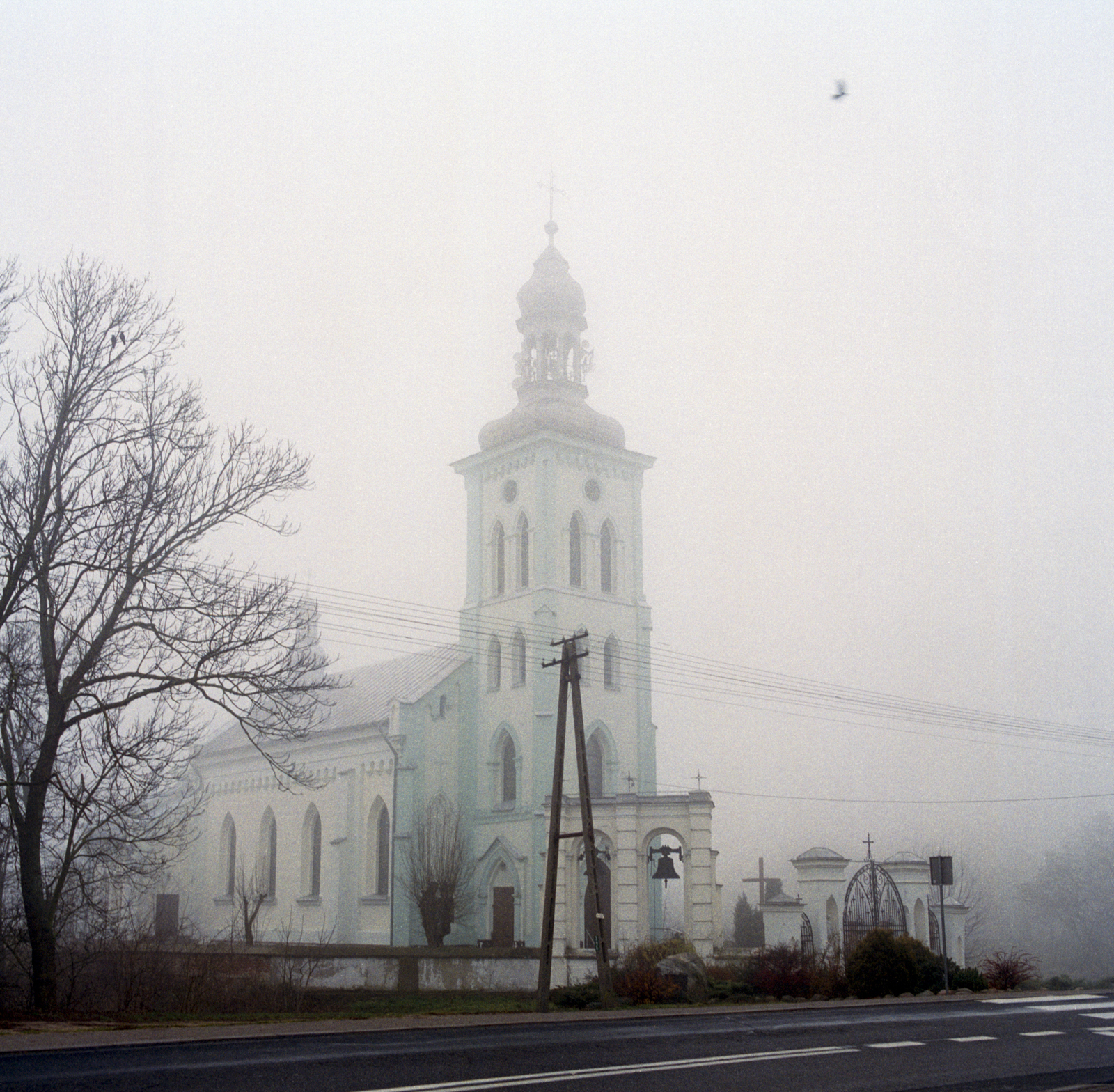