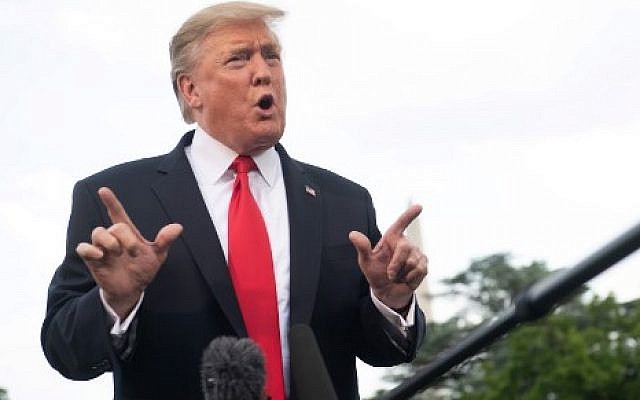 US President Donald Trump speaks to the media prior to departing on Marine One from the South Lawn of the White House in Washington, DC on May 20, 2019, as he travels to Pennsylvania for a campaign rally. (Photo by SAUL LOEB / AFP)

A senior Pentagon official on Friday publicly blamed Iran and its proxies for recent tanker bombings near the United Arab Emirates and a rocket attack in Iraq.

Vice Admiral Michael Gilday told Pentagon reporters that the US has “very high confidence” that Iran’s Revolutionary Guard was responsible for the explosions on four tankers, and that Iranian proxies in Iraq fired rockets into Baghdad. He said Iran also tried to deploy modified small boats that were capable of launching cruise missiles.

Gilday, the Joint Staff director, said the latest decision to send 1,500 additional troops to the Middle East will boost surveillance of Iranian forces and their proxies. The additional forces will include more manned and unmanned aircraft, a squadron of fighter jets, a Patriot missile battalion and military engineers.

Briefing reporters at the Pentagon, Gilday did not provide direct evidence to back up claims tying Iran to the attacks. He told reporters the conclusions were based on intelligence and evidence gathered in the region, and officials said they are trying to declassify some of the information so that it could be made public.

“This is truly operations driven by intelligence,” Gilday said, adding that the US continues to see intelligence suggesting that Iran is actively planning attacks against the US and partners in the region by the Revolutionary Guard and Iranian proxies in Yemen and Iraq.

When pressed for proof of Iran’s involvement, he said the mines used in the tanker attacks were attributed directly to the Revolutionary Guard. 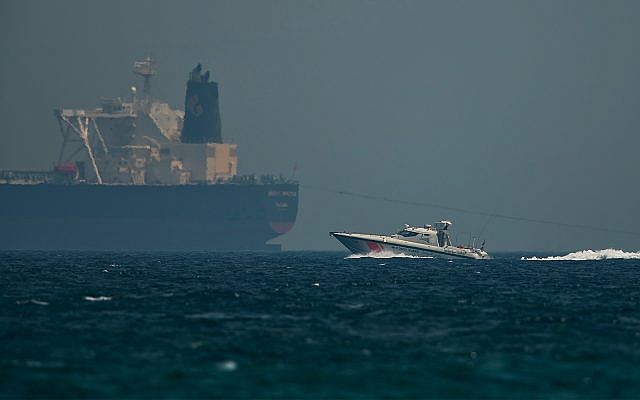 An Emirati coast guard vessel passes an oil tanker off the coast of Fujairah, United Arab Emirates, May 13, 2019. Saudi Arabia said two of its oil tankers were sabotaged off the coast of the United Arab Emirates near Fujairah in attacks that caused ‘significant damage’ to the vessels, one of them as it was en route to pick up Saudi oil to take to the United States. (AP Photo/Jon Gambrell)

“I’m not reverse engineering this,” he said. “The Iranians have said publicly they were going to do things. We learn more through intelligence reporting. They have acted upon those threats and they’ve actually attacked.”

Earlier on Friday, US President Donald Trump told reporters the 1,500 troops would have a “mostly protective” role as part of a build-up that began this month in response to what the US said was a threat from Iran, without providing details or evidence.

The deployments include a squadron of 12 fighter jets, manned and unmanned surveillance aircraft, and a number of military engineers to beef up protection for forces. In addition a battalion of four Patriot missile batteries that were scheduled to leave the Middle East has been ordered to stay. The total number of troops involved is about 1,500, with roughly 600 included in the Patriot battalion.

“We are going to be sending a relatively small number of troops, mostly protective,” the president said at the White House before setting off on a trip to Japan. “Some very talented people are going to the Middle East right now and we’ll see what happens.” 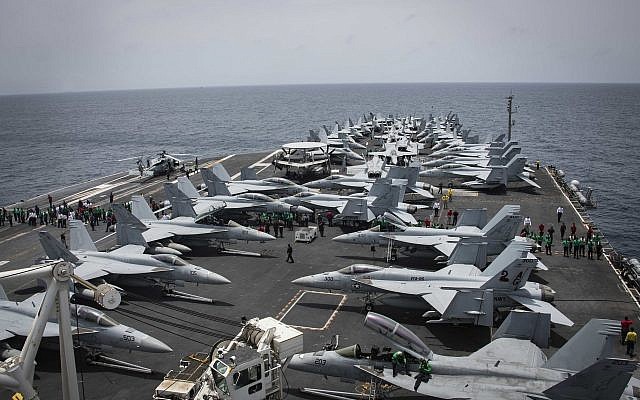 Trump has in recent weeks alternated between tough talk toward Iran and a more conciliatory message, insisting he is open to negotiations with the Islamic Republic. He seemed to downplay the prospect of conflict when he spoke at the White House.

“Right now, I don’t think Iran wants to fight and I certainly don’t think they want to fight with us,” he said.

The US has about 70,000 troops across the Middle East, including at a major Navy base in Bahrain and an Air Force base and operations center in Qatar. There are about 5,200 troops in Iraq and 2,000 in Syria.

Earlier this month, the US sent thousands more into the region around Iran, including an aircraft carrier strike group, four bomber aircraft and fighter jets.

Tension had been rising with Iran for more than a year. The Trump administration withdrew last year from the 2015 nuclear deal between the Islamic Republic and world powers and reinstated American sanctions that have badly damaged the Iranian economy.

The president has argued that the nuclear deal failed to sufficiently curb Iran’s ability to develop nuclear weapons or halt its support for militias throughout the Middle East that the US argues destabilize the region.

Times of Israel staff contributed to this report.