The United States invaded Afghanistan along with allied forces in 2001 shortly after the 9/11 terror attacks and has been there ever since, before the impending withdrawal this year of the last American troops.

AP photographers have documented the protracted conflict and occupation over the course of two decades, and now the unexpectedly chaotic departure as the Taliban swiftly reassert control over the country.

As is the case with any war, many of the images that emerged were of death and destruction, pain and suffering.

In Kandahar, bloody banknotes covered the bare torso of a dead insurgent after police found them in his pocket following an attack on the former intelligence headquarters and a shootout with security forces. 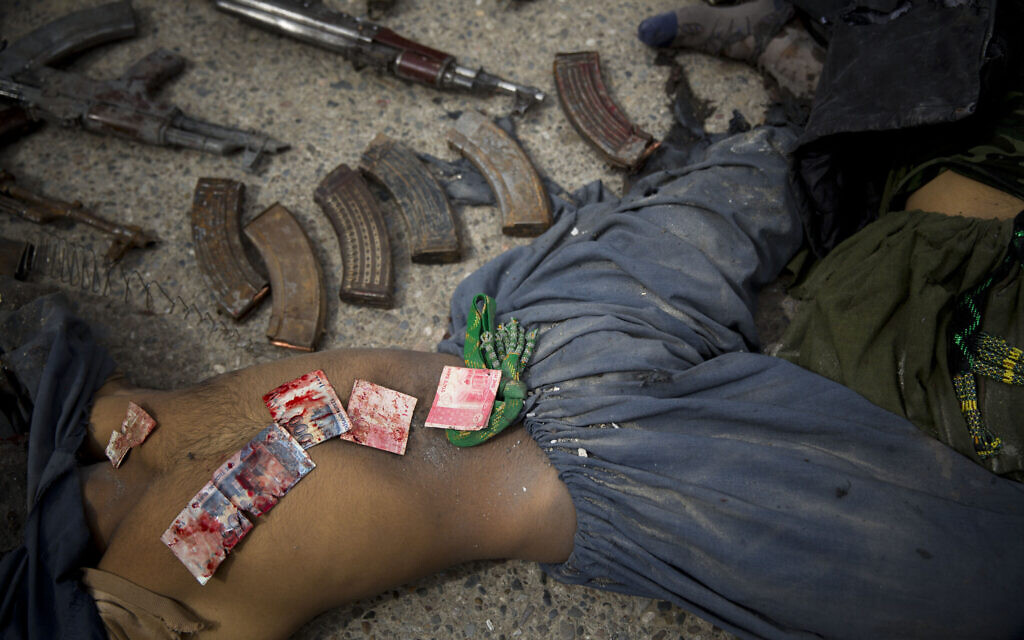 Pakistani banknotes covered in blood are displayed on the body of a dead suicide bomber after police found them in his pocket in the center of Kandahar, Afghanistan, Wednesday, March 12, 2014, after an attack on the former Afghan intelligence headquarters. Police officials said three insurgents who tried to storm the former headquarters of Afghanistan’s intelligence service in southern Kandahar died in a gunbattle with security forces. (AP Photo/Anja Niedringhaus)

Aboard a helicopter on a medevac mission, two US army soldiers treated a member of the Afghan National Army who was wounded by gunfire during an assault in the Taliban stronghold of Marjah.

And in a village in the southern province of Zabul, a soldier of the 4th Infantry Regiment frisked an Afghan man in his house during a search operation

But other photos portrayed day-to-day human existence, as people tried to go on with their lives even as the gunfire and bomb blasts never ceased. 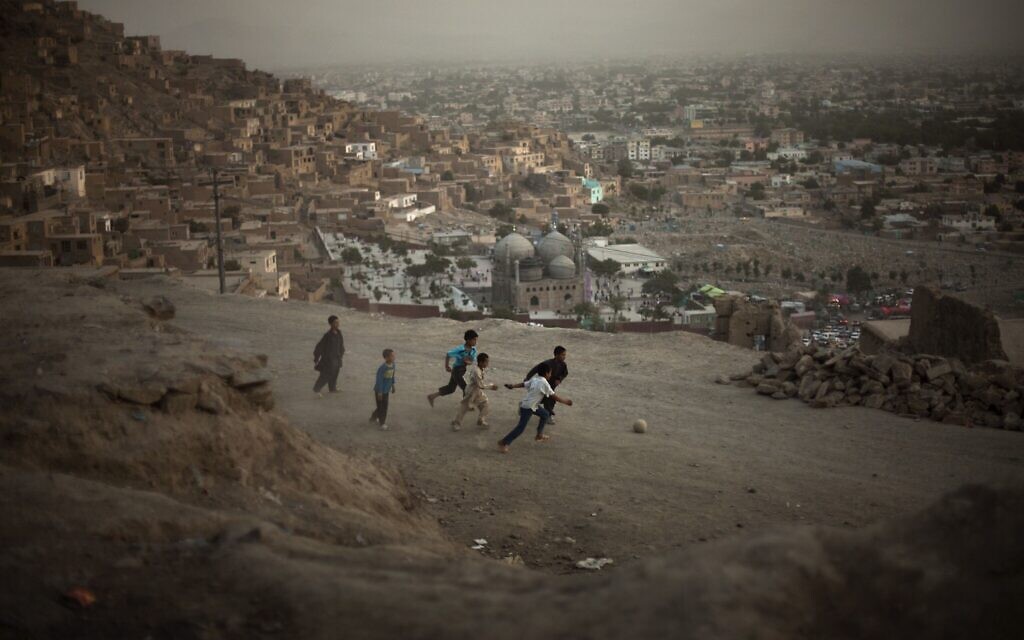 On a hillside overlooking Kabul, boys chased each other and kicked a soccer ball across a dirt field.

At an open-air market, a livestock merchant displayed a flock of sheep he brought for sale ahead of the major Islamic holiday Eid al-Adha.

And at a store lined with dozens of blue burqas, a woman waited in a changing room to try on one of the head-to-toe-covering garments. 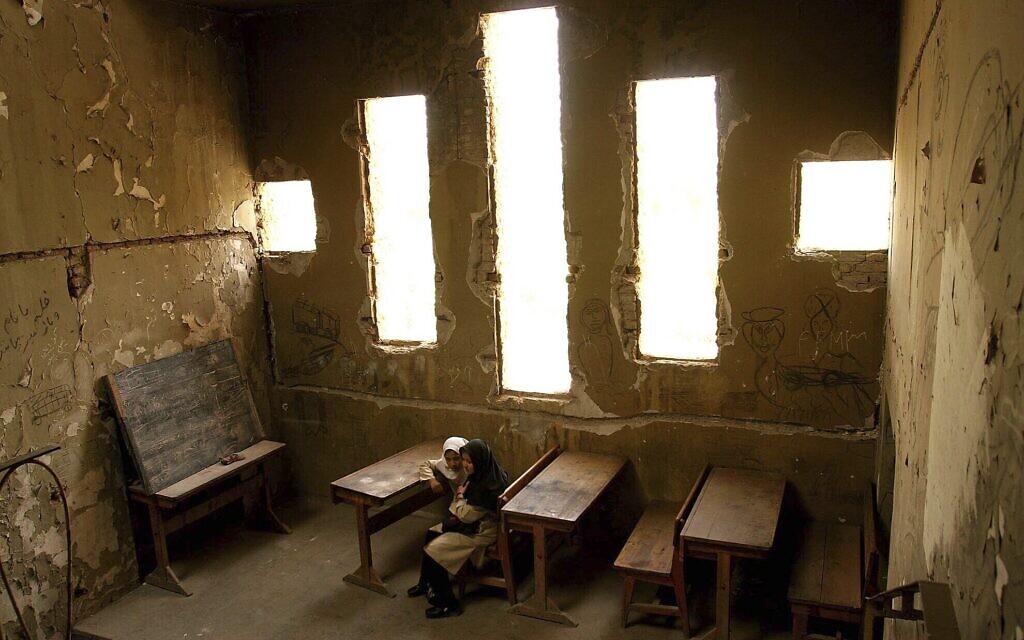 Basera, 13, right, and Saira, 10, wait for their class to begin at Loy Ghar school, in the bombed-out carcass of the Kabul Theater in Afghanistan’s capital, April 20, 2005. The bullet-riddled building has become a place of hope for more than 400 students looking to rebuild their lives after decades of war. Classrooms have sprung up near windows or where bombs have destroyed enough of the wall to allow in sunlight. (AP Photo/Tomas Munita)

There were also signs of attempts to strengthen society and weak governmental institutions.

The hollowed-out shell of the Kabul Theater in the capital became a beacon of hope for more than 400 students, even though it still lacked electricity or running water. Two young girls, who would have been barred from going to school under the previous Taliban rule, sat awaiting class as sunlight streamed through windows without panes.

Villager girls gazed at UN workers unloading ballot kits from a helicopter in a remote northeastern area where an airlift was the only way to deliver materials for the country’s first direct presidential vote.

Afghan policemen held out their arms to simulate weapons during a training session with US soldiers outside Kandahar.

And newly trained female officers in crisp, dark uniforms sat at the front of their graduating class in a ceremony at the National Army’s training center in Kabul. 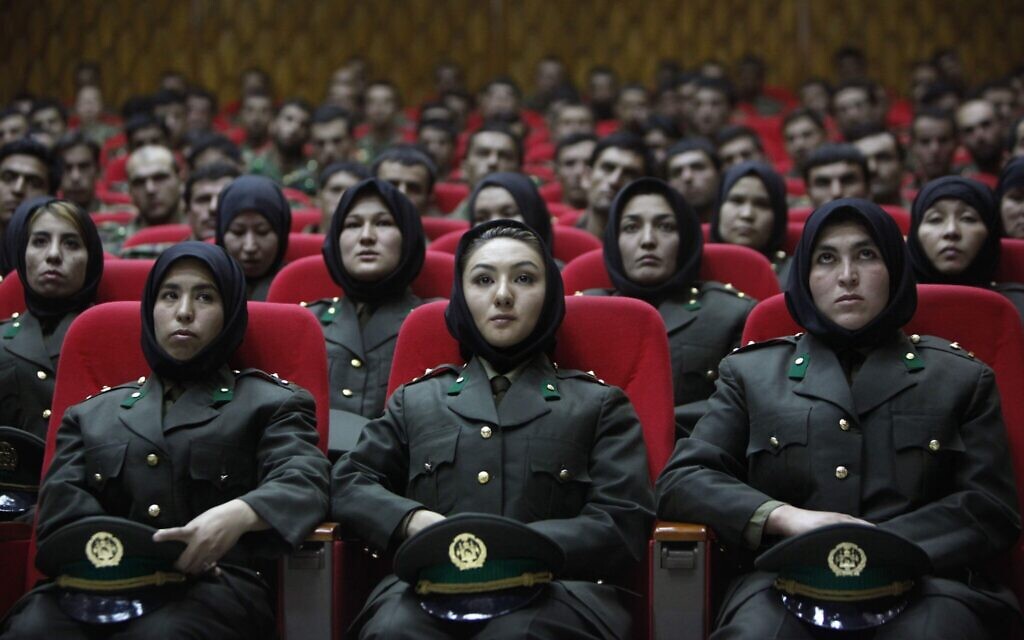 Such attempts to remake Afghanistan are now thrown into doubt with the Taliban ascendant again. The group says it will govern in a more moderate fashion than before, but many people fear a return to the harsh rule of the 1990s when women were largely confined to their homes, TV and music were banned and authorities mutilated or publicly executed people suspected of crimes.

Journalists who covered the last 20 years in the country, both Afghans and foreigners, did so at considerable personal risk.

In the AP family, photographer Emilio Morenatti lost his left leg to a roadside bomb in 2009, and five years later, photographer Anja Niedringhaus was shot dead by a policeman in an attack that also seriously wounded correspondent Kathy Gannon. 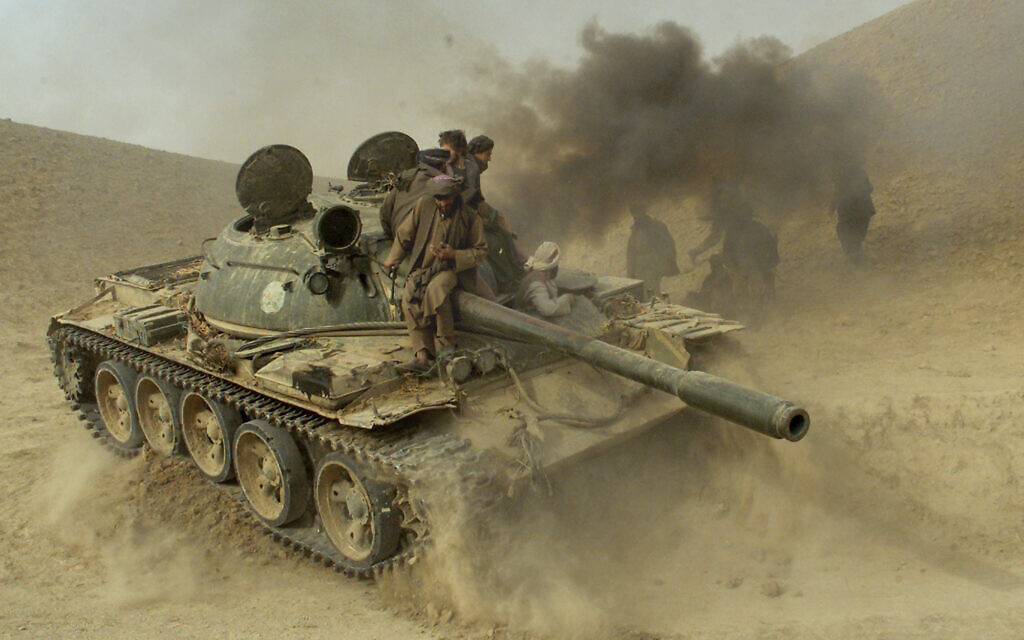 Defecting Taliban fighters maneuver a tank through the front line near the village of Amirabad, between Kunduz and Taloqan, Saturday, Nov. 24, 2001. (AP Photo/Jerome Delay) 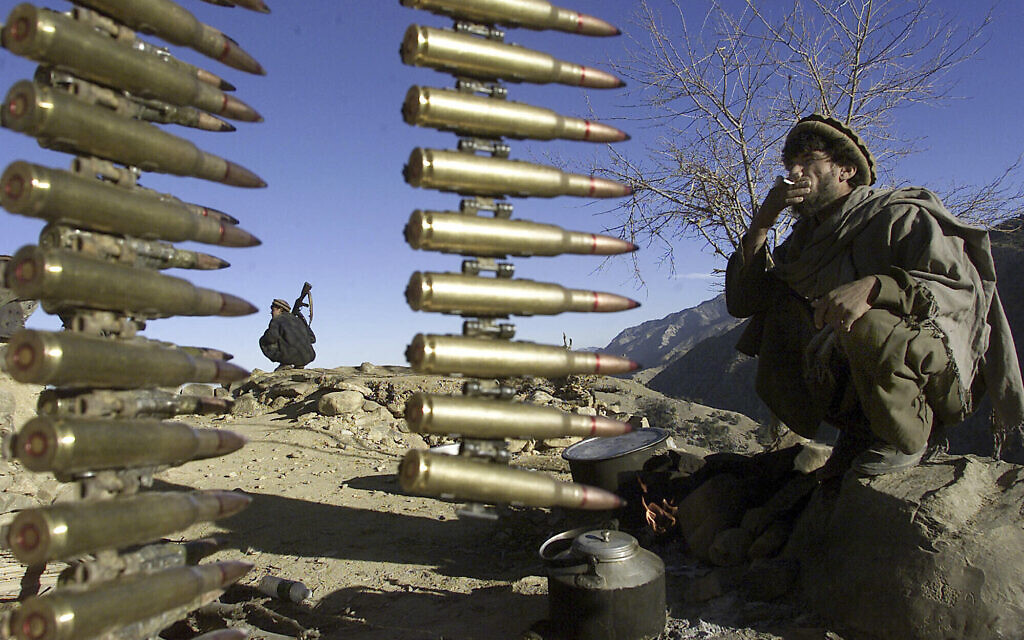 Afghan anti-al-Qaida fighters rest at a former al-Qaida base in the White Mountains near Tora Bora Wednesday Dec. 19, 2001, behind a string of ammunition found after the retreat of al-Qaida members from the area. (AP Photo/David Guttenfelder) 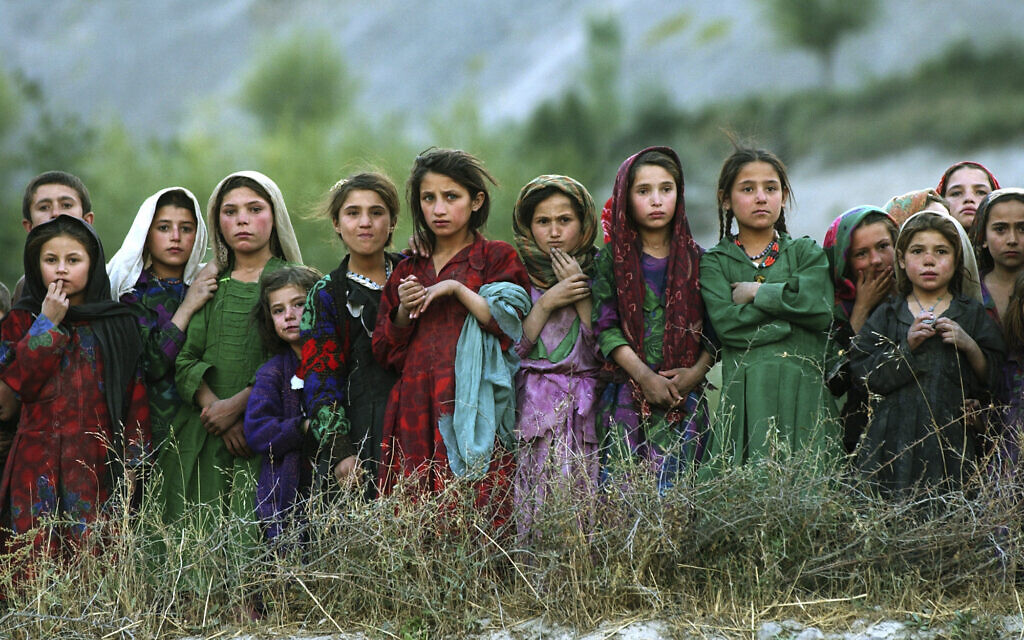 Local girls look at U.N. workers unloading ballot kits from a U.N. helicopter in Ghumaipayan Mahnow village, some 410 kilometers (256 miles) northeast of Kabul, Afghanistan, Monday, Oct. 4, 2004. By air is the only way to deliver the electoral material in the inaccessible areas of the Badakhshan province. (AP Photo/Emilio Morenatti) 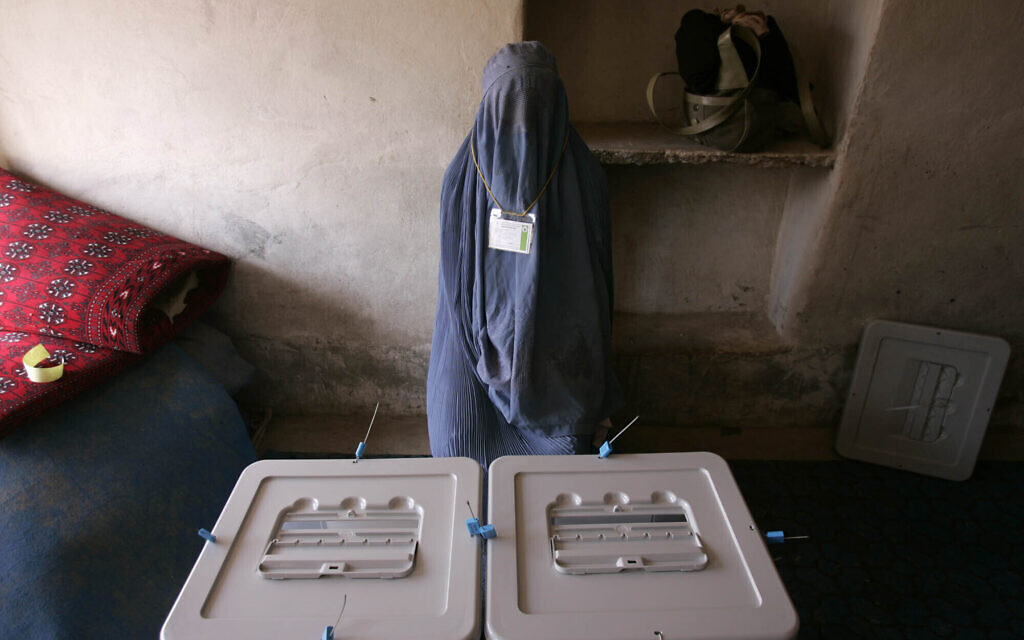 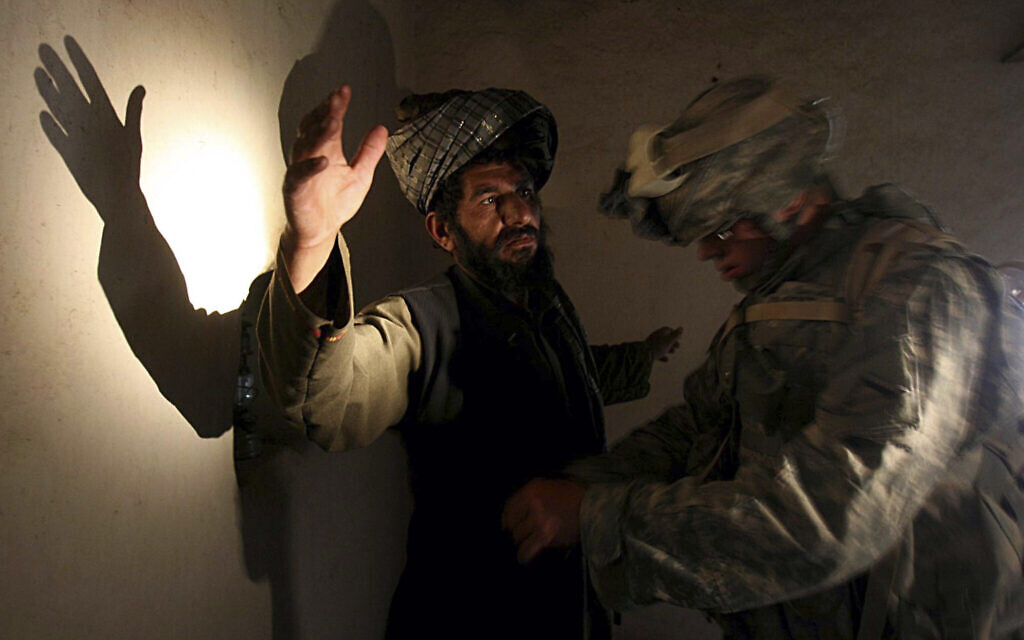 A U.S. soldier of B company, 4th Infantry Regiment frisks an Afghan man in his house during a search operation in Sinan village in Zabul province, southeastern Afghanistan, Monday, April 2, 2007. (AP Photo/Rafiq Maqbool) 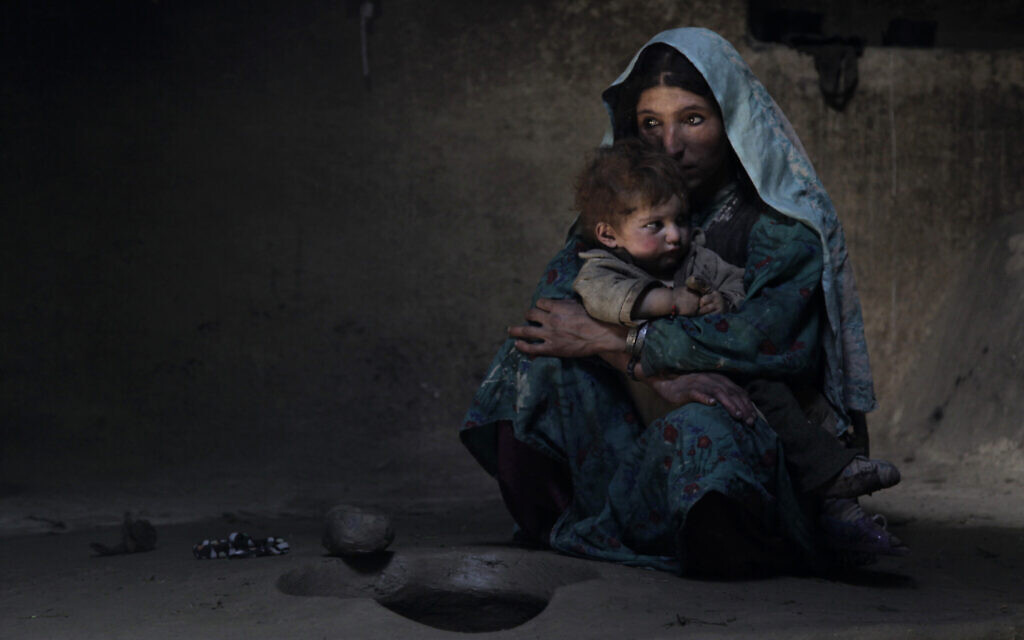 Sarab village resident Raihan comforts her 1-year-old son after having an early morning opium smoke with family members in the Badakhshan province of Afghanistan, July 13, 2009. Raihan was addicted to opium while pregnant with her son making him an addict at birth. “When he was born, he would cry day and night. But when she blows smoke in his face, he sleeps,” said her father Islam Beg. In dozens of mountain hamlets in this remote corner of Afghanistan, opium addiction has become so entrenched that whole families, from toddlers to old men, are addicts. (AP Photo/Julie Jacobson) 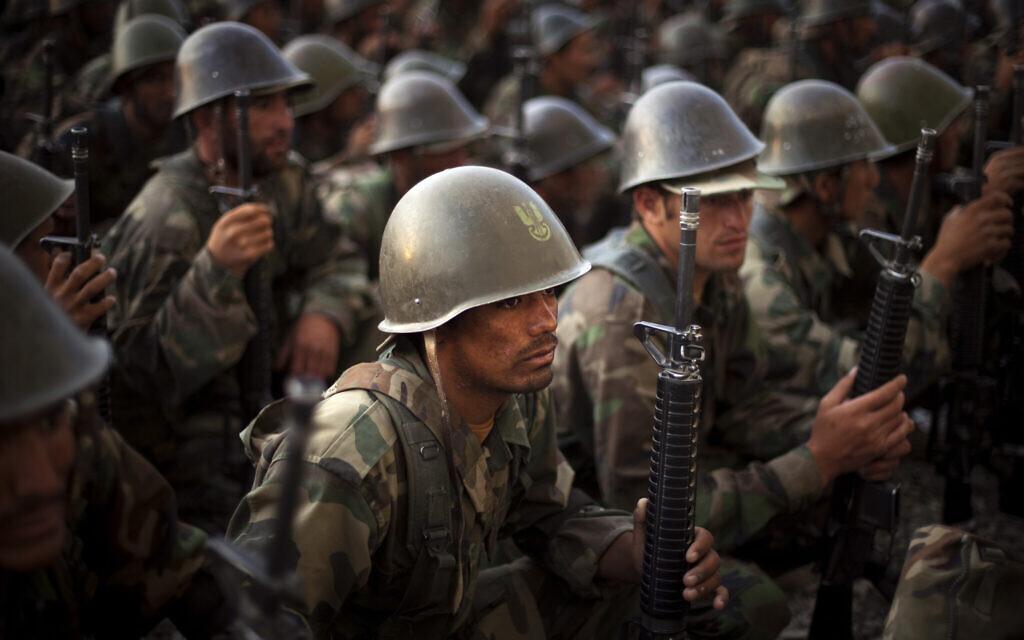 Afghan National Army recruits listen to the explanations of their instructor during a training session at the Kabul Military Training Center in Afghanistan, Sunday, July 19, 2009. (AP Photo/Emilio Morenatti) 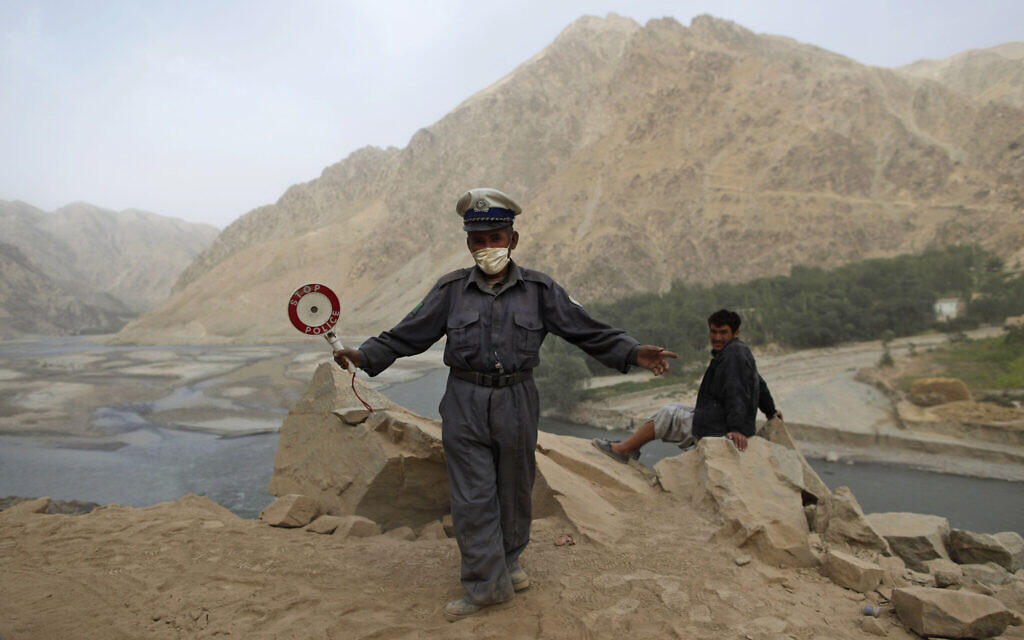 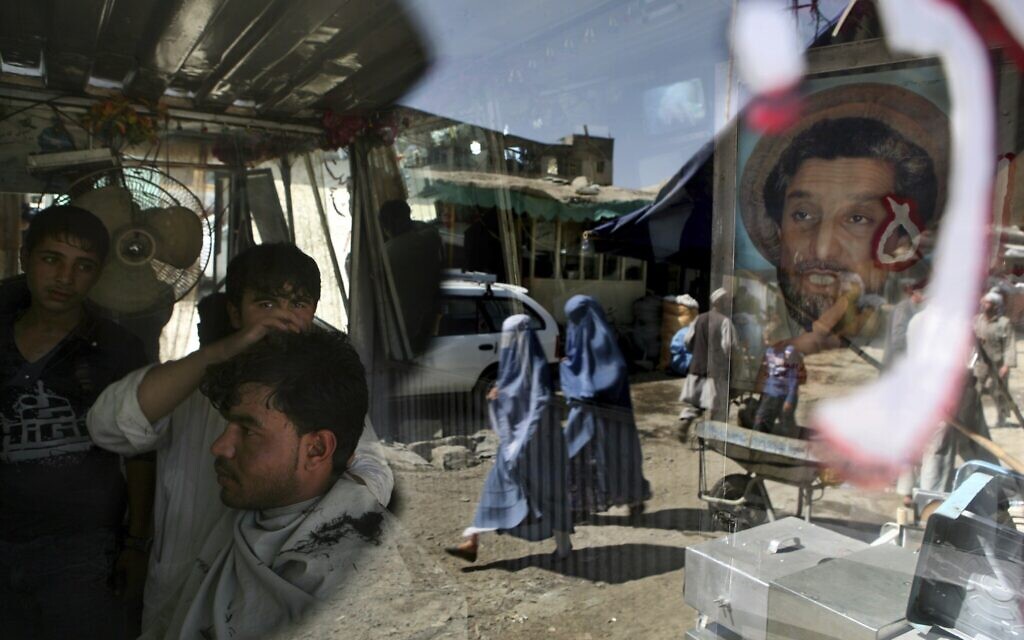 An Afghan barber works on a customer in his shop as a portrait of Afghanistan national hero Ahmad Shah Massoud adorns its door in Kabul, Afghanistan, Tuesday, Sept. 29, 2009. (AP Photo/Altaf Qadri) 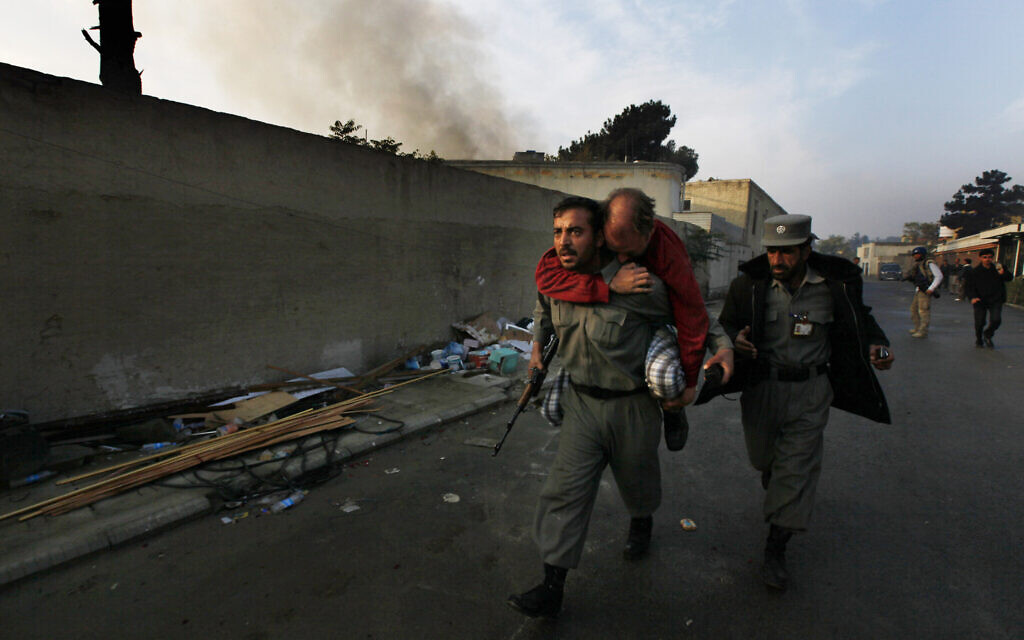 An Afghan police officer carries an injured unidentified German national as smoke bellows from the site of an attack in Kabul, Afghanistan on Wednesday, Oct. 28, 2009. Gunmen attacked a guest house used by U.N. staff in the Afghan capital of Kabul. (AP Photo/Gemunu Amarasinghe) 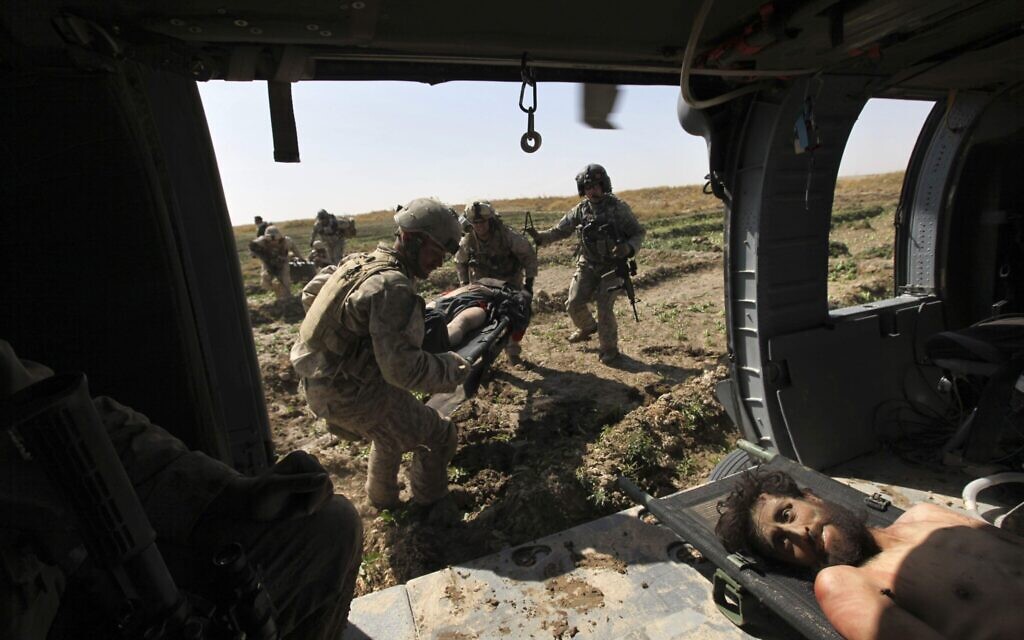 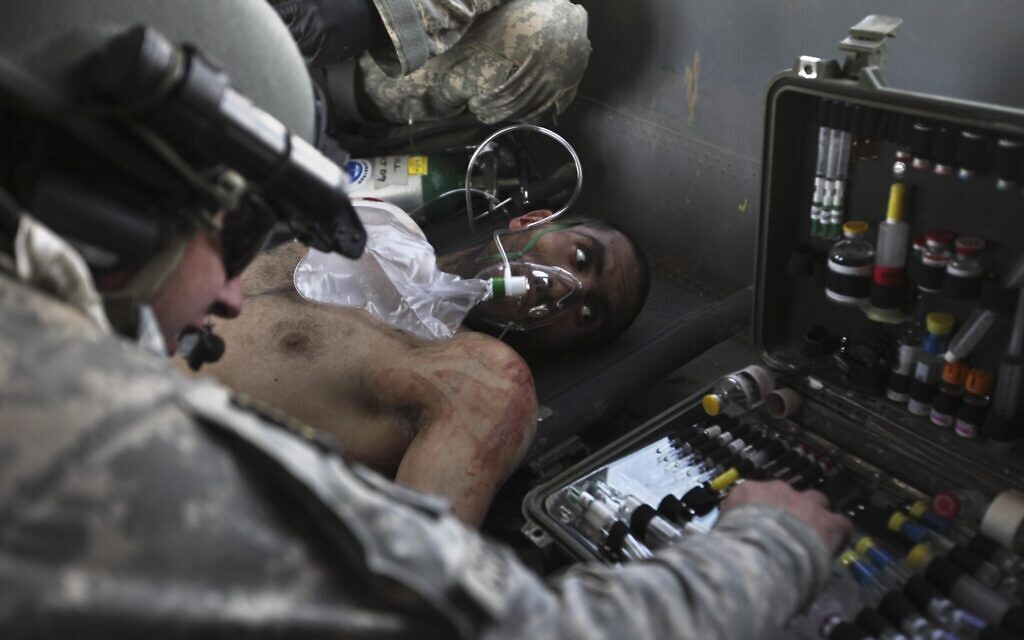 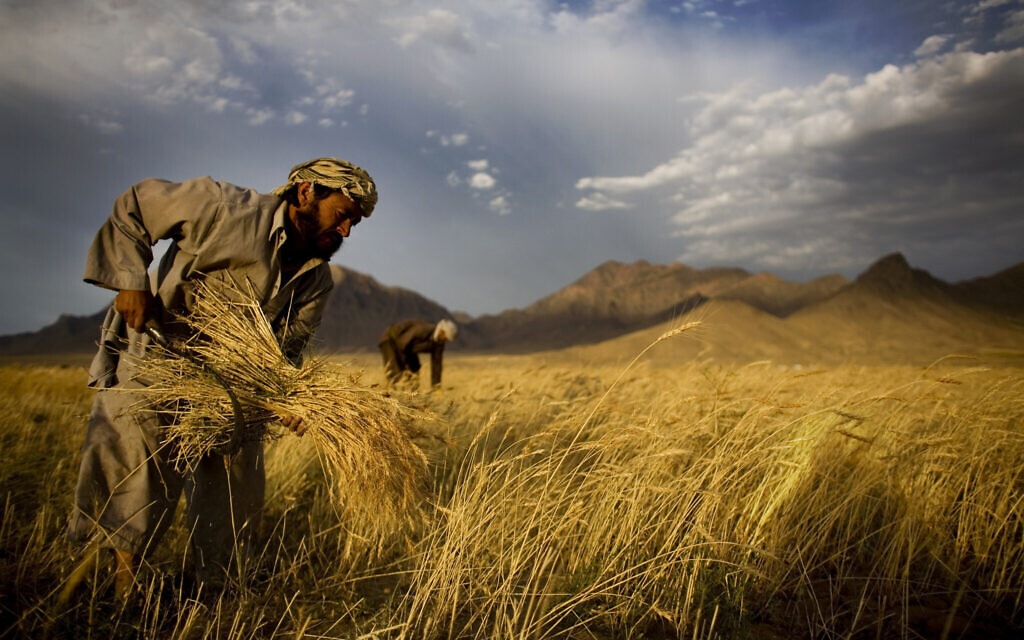 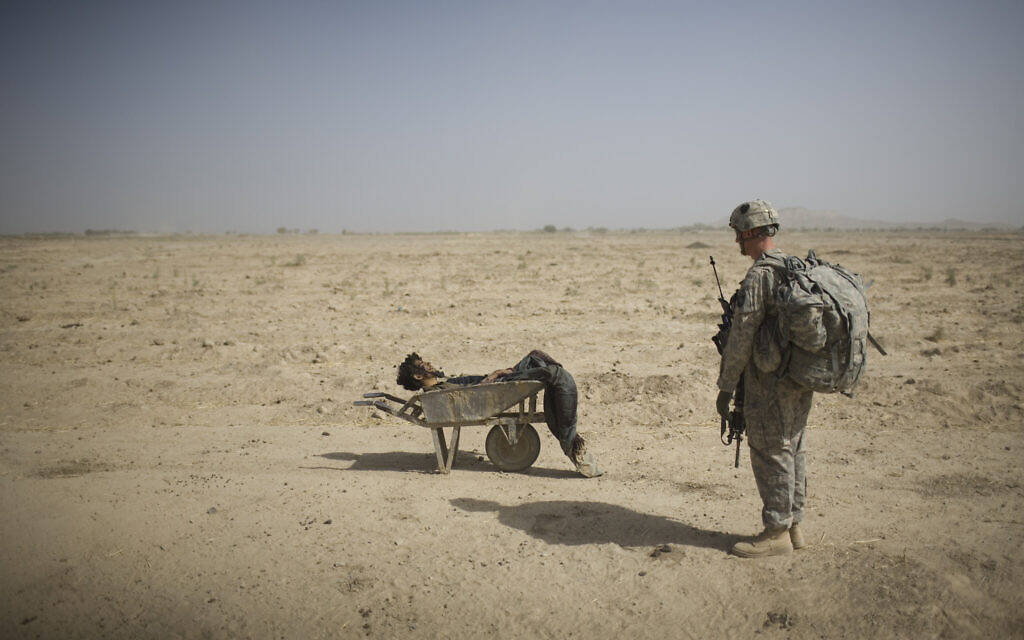 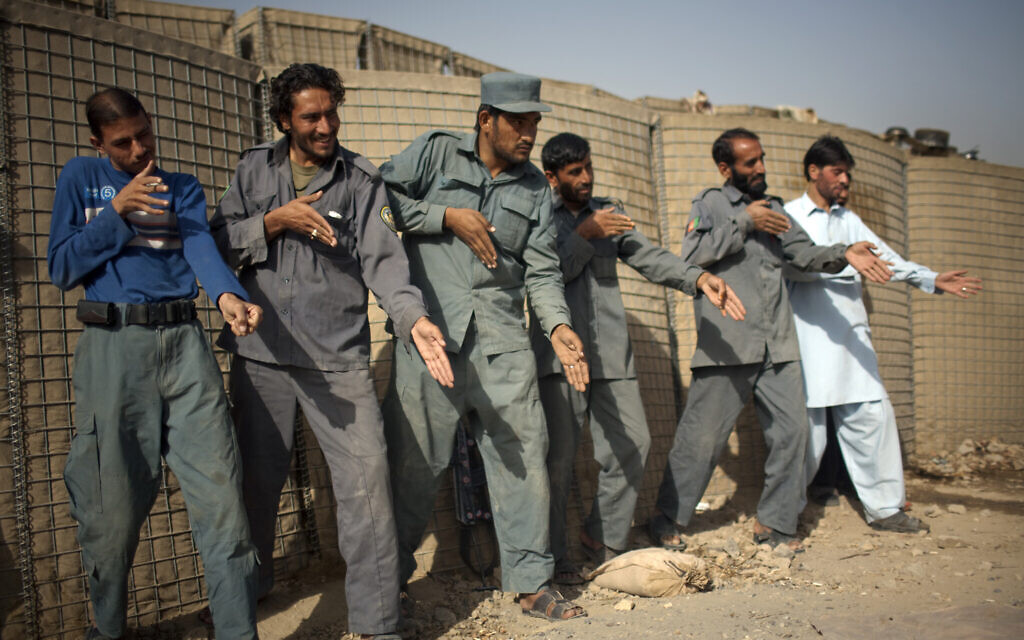 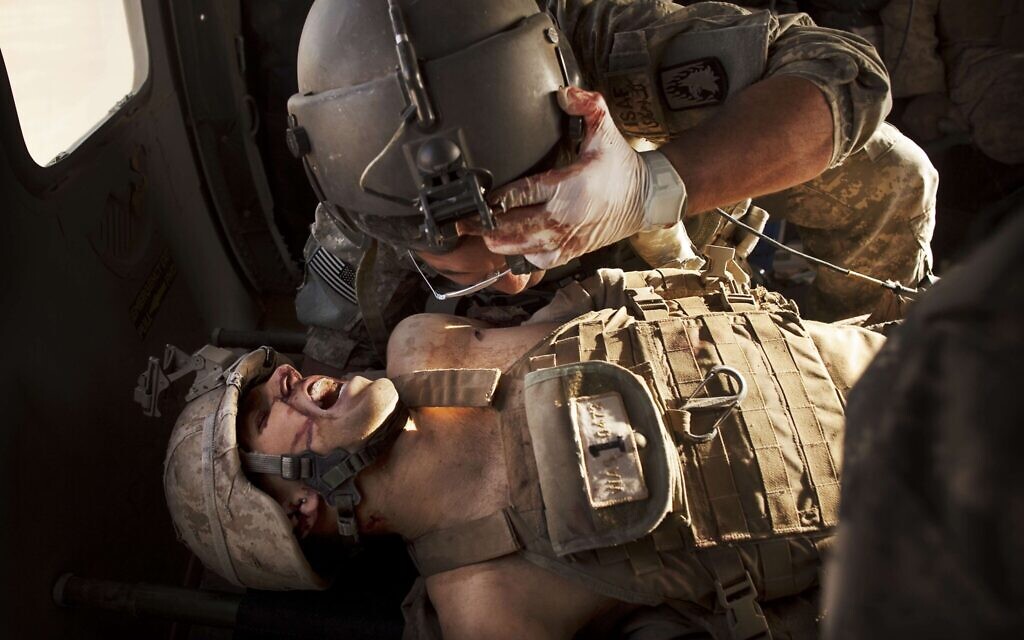 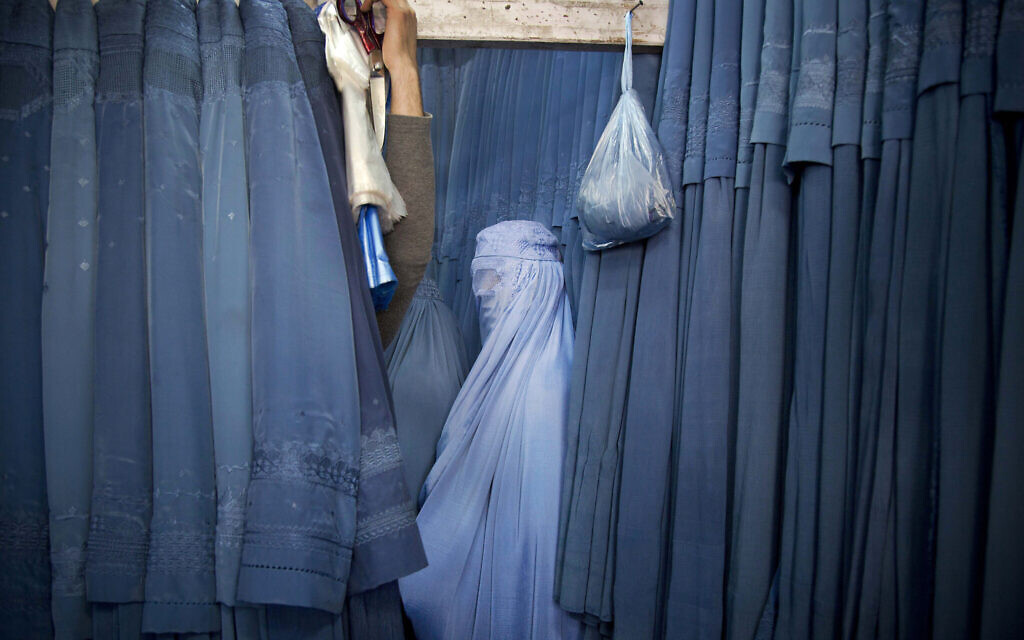 An Afghan woman waits in a changing room to try out a new Burqa, in a shop in the old city of Kabul, Afghanistan, Thursday, April 11, 2013. Before the Taliban took power in Afghanistan, the Burqa was infrequently worn in cities. While they were in power, the Taliban required the wearing of a Burqa in public. (AP Photo/Anja Niedringhaus) 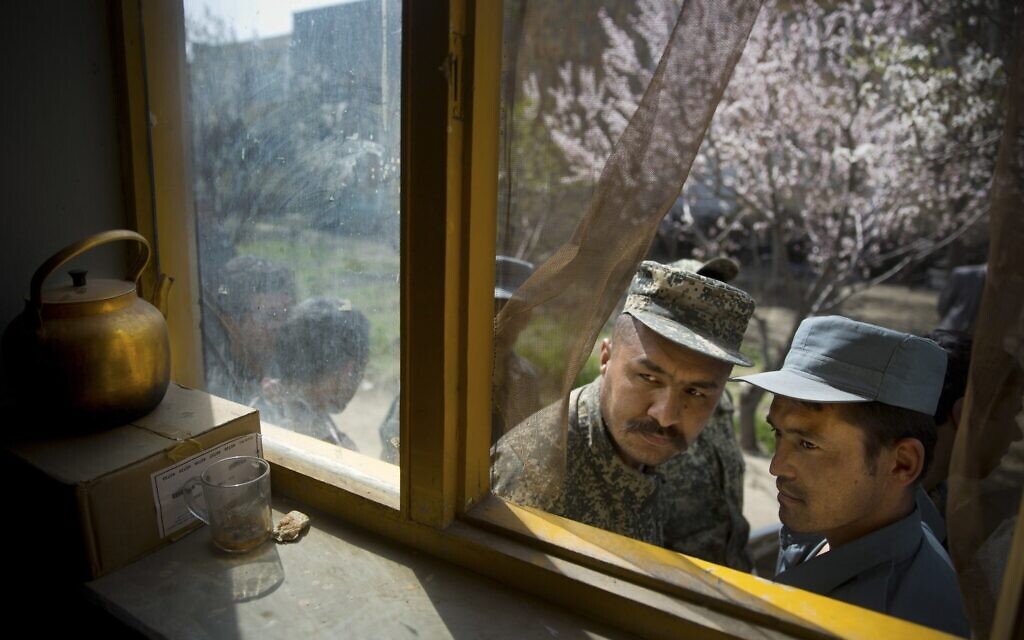 An Afghan soldier, left, and a policeman peek through a window as they queue with others to get their registration card on the last day of voter registration for the upcoming presidential elections outside a school in Kabul, Afghanistan, Tuesday, April 1, 2014. (AP Photo/Anja Niedringhaus) 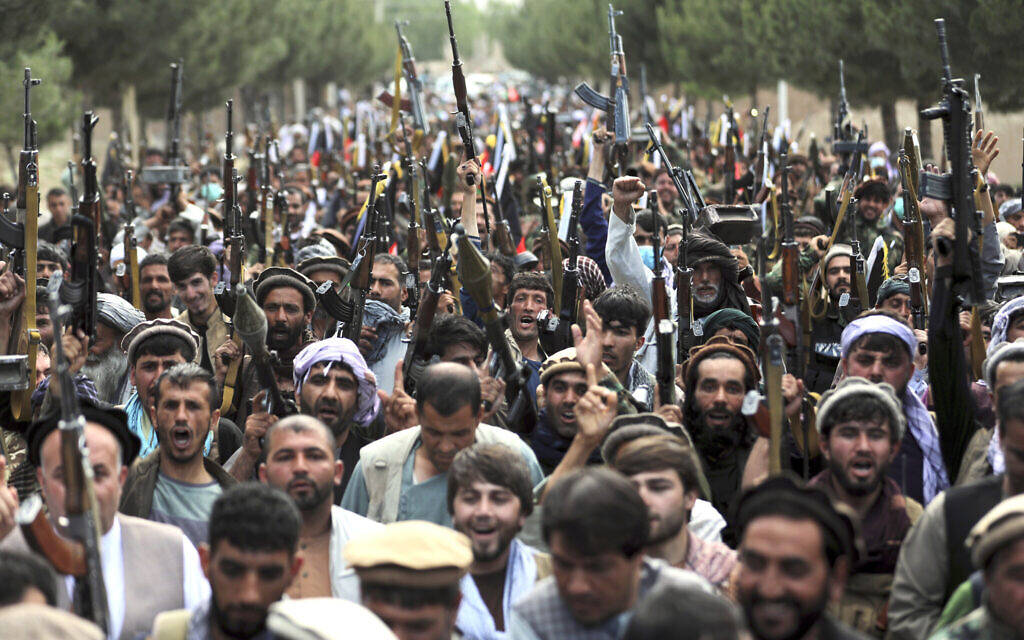 Afghan militiamen join Afghan defense and security forces during a gathering in Kabul, Afghanistan, Wednesday, June 23, 2021. (AP Photo/Rahmat Gul)
Is our work important to you?