Donald Trump is the latest United States president to be cast as a “Christian Zionist,” but it’s a legacy that began two centuries ago with John Adams. The reasoning behind Trump’s support of a Jewish homeland, however, differs sharply from the second president’s belief system, which was recorded in 1819 with musings to a friend about “restoring” an independent Jewish nation to Israel.

After leaving the White House in 1801, Adams maintained correspondence with Mordechai Manuel Noah, the most famous American Jew of his era. Of Sephardic background, Noah wore many hats, including those of diplomat, judge, surveyor, and playwright.

It was as a diplomat that Noah’s religion played a role, however. Evoking the current conversation about “disloyal” American Jews initiated by President Trump, in 1815 Noah was recalled from a posting in Tunis, due — officially — to his religion. Noah’s Judaism, it was said, “[formed] a bar to the exercise of his consular functions,” forcing president James Madison to dismiss him. (Rumor has it, however, that also business interests back home were irked by Noah’s ransom payments to the pirates who’d been terrorizing American merchant ships for so many years.)

In 1819, Noah returned from yet another trip abroad and sent Adams a copy of his travel memoir. Soon afterwards, Noah received a warm response from the 84-year-old legend.

After commenting on Noah’s travels, Adams wrote that his friend should have also visited “Syria, Judea, and Jerusalem,” for Adams would have read Noah’s accounts of those places with special consideration. From there, Adams lapsed into whimsical thinking.

In the Holy Land, mused Adams, Noah could be “at the head of a hundred thousand Israelites… & marching with them into Judea & making a conquest of that country & restoring your nation to the dominion of it. For I really wish the Jews again in Judea an independent nation.”

Taken in isolation, this passage appears to resonate with the goal of creating a Jewish state. The kicker, however, came in the next sentence: 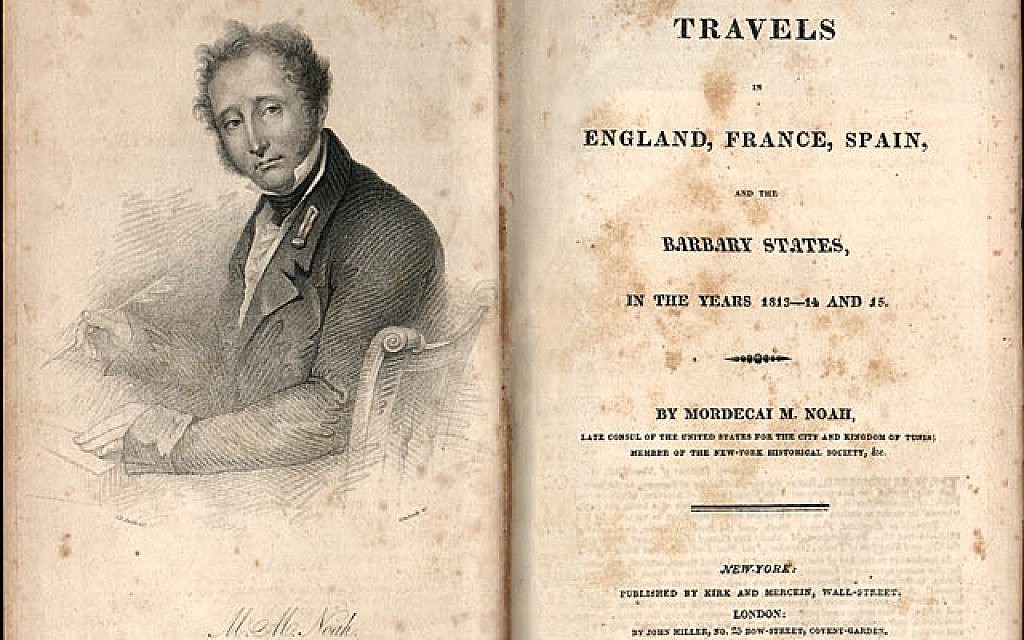 “I believe [that]… once restored to an independent government & no longer persecuted [the Jews] would soon wear away some of the asperities and peculiarities of their character & possibly in time become liberal Unitarian Christians for your Jehovah is our Jehovah & your God of Abraham Isaac and Jacob is our God,” wrote Adams to Noah.

In other words, Adams supported Jews returning to the Holy Land so they could convert to a Unitarian belief system. This was the system Adams adopted for himself during retirement, a rejection of the Holy Trinity as divine and of his Puritan roots.

In an exchange with The Times of Israel, historian Jonathan Sarna said Adams’ letter to Noah “has nothing to do with Zionism.”

“First of all, the word Zionism did not exist, and Theodor Herzl had not yet been born,” said Sarna, director of the Schusterman Center for Israel Studies at Brandeis University. 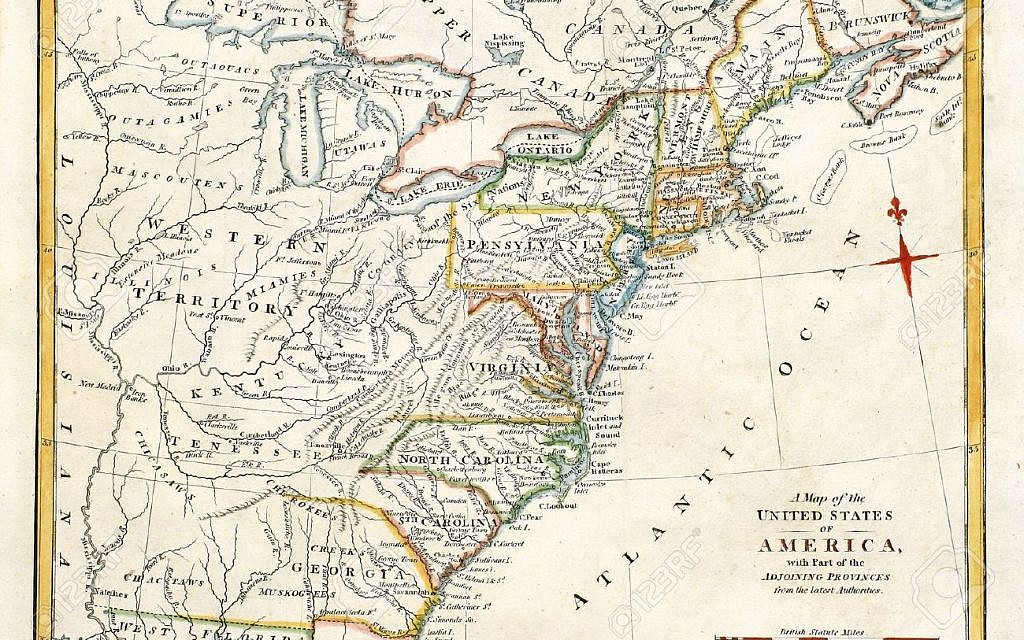 The American colonies in a 1795 map

“Second, Adams did not place return to Zion within a nationalist framework,” said Sarna, author of a biography on Noah called “Jacksonian Jew.”

Adams, said Sarna, “used the term ‘restored’ — a sign that he had in mind Christian restorationist rhetoric. Many, even before Adams, felt that America would play a special role in advancing God’s scriptural promise to restore the Jews to their land.”

Indeed, the rise of what is now called “Christian Zionism” actually took place before Theodor Herzl and his movement of political Zionism. On both sides of the Atlantic, Christians sought to fulfill New Testament prophecies by aiding in the return of Jews to Zion.

“For close to 150 years, in the US and England, there has been a phenomenon aptly referred to as ‘Christian Zionism,'” said Jeffrey S. Gurock, a professor of American Jewish history at Yeshiva University.

“There have been Christians who have advocated for the Zionist cause — like Adams — who believed Jews should be returned to their land as a crucial step in hastening the Second Coming,” Gurock told The Times of Israel.

“And Zionists for their part, starting really with Noah — a proto-Zionist — have tried to effectively co-opt this ‘philo-Semitic’ tendency to promote Jewish causes,” said Gurock.

Although the part in John Adams’s letter about the Jews’ “asperities and peculiarities” might sound harsh to modern ears, the president’s views on Jews were held by most of the Founding Fathers and many Jews themselves.

“Like most Christian Americans of his era who took a friendly interest in Jews, John Adams entertained romantic notions of his Jewish contemporaries, seeing in them living embodiments of the era from which Jesus emerged,” said Karla Goldman, a professor of Judaic Studies at University of Michigan. 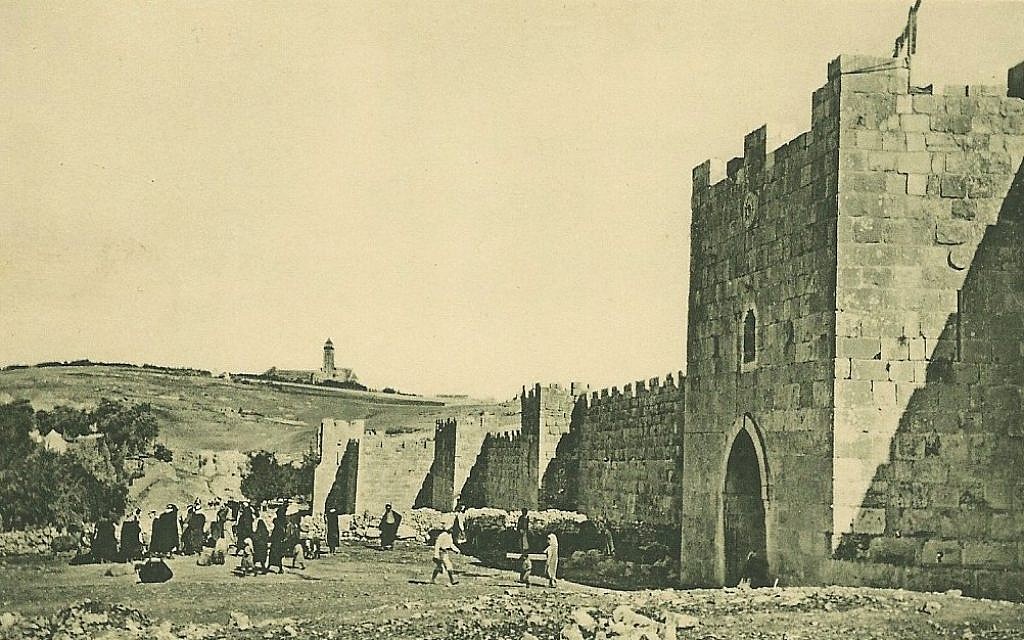 According to Goldman, Adams was interested in spreading Enlightenment ideals, and his opinions of Jews were not based on “contempt, disrespect, or as part of a surreptitious evangelistic agenda,” she told The Times of Israel.

“The idea of Jews bringing western Enlightenment ideals to ‘Syria, Judea & Jerusalem’ anticipates a modern Zionism in ways that contradict Evangelical ideas of Jews returning to Zion as a prelude to the Rapture,” said Goldman.

Even Mordechai Noah, the friend to whom Adams addressed his letter, was known to cast his fellow Jews in a negative light. During his milestone 1818 “Discourse” speech in New York City, Noah pushed his version of an “agrarian theocracy” to remedy the abysmal situation of Jews in Europe. 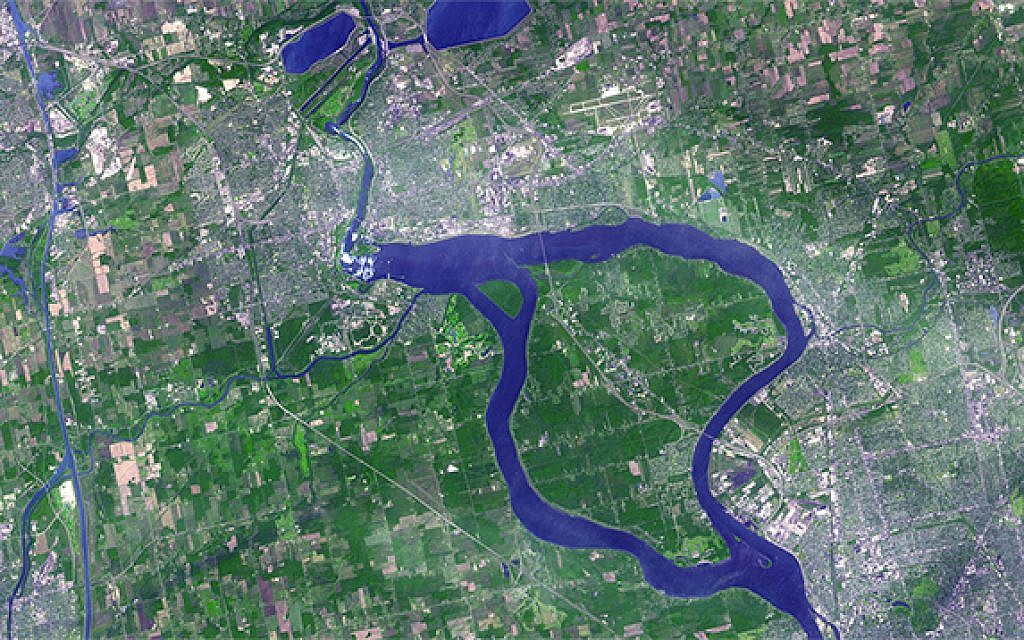 Grand Island in New York, once intended to be an ‘agrarian theocracy’ for persecuted Jews and since fictionalized as ‘Isra Isle’ (Google Maps)

“Jews must be turned aside from the crooked paths of traffic, miscalled commerce, to industry and agriculture,” said Noah. A few years later, he founded a failed Jewish colony — Ararat — in upstate New York, since fictionalized as “Isra Isle.”

From Founding Fathers to the ‘Baby Christian’

According to historian Sarna, there was nothing unusual about Adams’s desire to see Jews return to Israel. Adams was, however, more specific about the desired outcome of such a return.

“Adams was unusual in specifying that Jews should become ‘liberal Unitarian Christians’ but not unusual at all in his hope that Jews would convert to Christianity,” said Sarna. “Today, many Evangelical Christians believe that Jesus will return once Jews fully return to Zion and rebuild the Temple.”

In the opinion of historians interviewed by The Times of Israel, there was not a political motivation behind Adams’ “wish” to see Jews restored to the Holy Land. At the time of the Adams-Noah exchange, there were fewer than 5,000 Jews living in the United States.

“Certainly, there was little in the way of political motivations at play for a retired and weakened John Adams in his observations to Noah,” said University of Michigan’s Goldman. 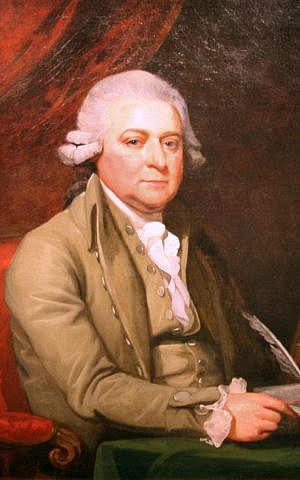 Regardless of what Adams had in mind as an end-game for Jews returning to Israel, he and the other Founding Fathers were on intimate terms with the Hebrew Bible and New Testament. This is not the case with the White House’s current occupant, according to Stephen Spector, a professor at Stony Brook University.

“It’s hard to speak of another person’s faith or motives definitively, but it seems clear that Trump’s unequivocal support of Israel, including his policy on Jerusalem, did not emerge from his religious convictions,” said Spector, author of the book, “Evangelicals and Israel: The Story of American Christian Zionism.”

According to Spector, “Some members of the religious right say that [Trump] is a ‘baby Christian,’ but his public statements and behavior do not betray a familiarity with the Bible or the basic tenets of Christianity. Nor was his support for Israel clear in his initial statements about the Middle East.”

For Adams, by way of contrast, the Bible was a lifelong guidebook. In a letter written to his son Quincy — the future president — in 1811, Adams said the Bible has a way of “making you wiser and more virtuous.” The retired president added he reads the Bible as an annual “practice” in self-improvement.

“I have always endeavored to read it with the same spirit and temper of mind, which I now recommend to you: that is, with the intention and desire that it may contribute to my advancement in wisdom and virtue,” wrote Adams.

For historian Goldman, Trump’s recent retweets regarding Israel go far to illustrate the differences between the worldviews of Adams and Trump.

“Trump’s recent bizarre retweeting of a message that crowns him as ‘the King of Israel’ and likens him to ‘the second coming of God’ is about as far from Adams’ notions of an ‘enlighten’d’ human politics as one could imagine,” said Goldman.