OSWIECIM, Poland — Families huddled in front of the entrance to the Auschwitz-Birkenau Memorial and Museum in late January, tour groups counted off, and misplaced wheelchairs and walkers were tracked down and returned to their owners. Off to one side, an older man stood, staring out into the distance.

Approached by The Times of Israel, the man introduced himself as Sol Graf. “I’m a part of the, howdoyoucallit, survivor delegation, that I was invited to the 75th anniversary,” he said in an Eastern European accent.

One day earlier, on January 27, the grounds of the former death camp and many of the surrounding roads had been closed to the public while visiting dignitaries including French President Emmanuel Macron and Britain’s Prince Charles toured the site ahead of a ceremony attended by over 3,000 people in honor of the 75th anniversary of the camp’s liberation. Among the attendees were roughly 200 Holocaust survivors, over half of whom were brought under the auspices of the Auschwitz-Birkenau Memorial Foundation (ABMF).

New Jersey-based Graf, along with his wife Katarina, also a Holocaust survivor, and their daughter Irit Wittmann, were among those in the ABMF delegation.

The commemoration ceremony was different from many like it. Instead of giving speeches about the dangers of racism, the politicians and heads of state listened silently as the survivors themselves spoke about what they’d seen in this place seven decades before. 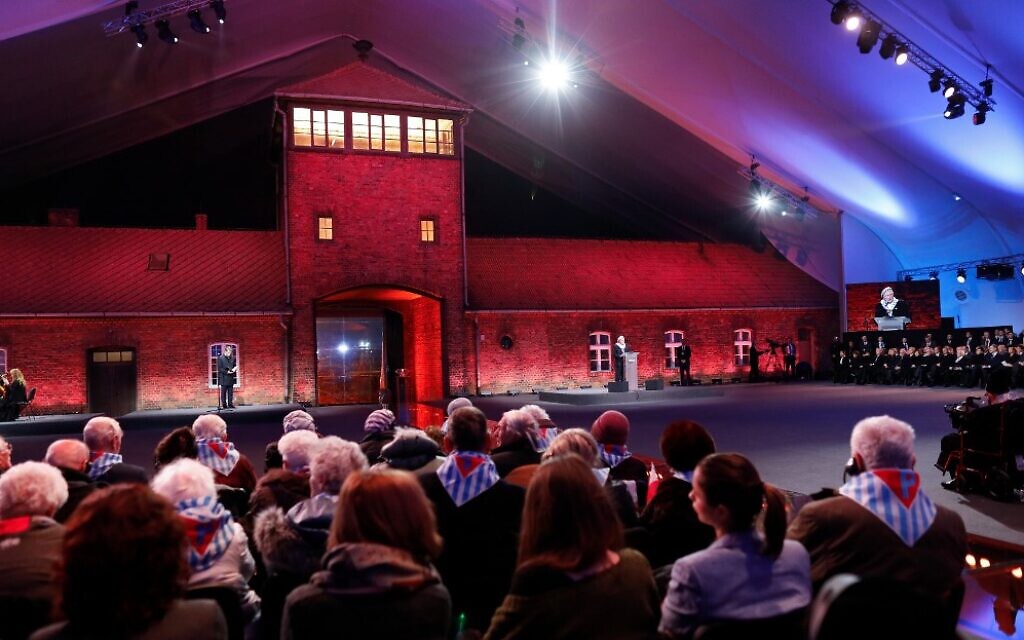 Survivors attend the official ceremony at the former German Nazi death camp Auschwitz-Birkenau during events to commemorate the 75th anniversary of the camp’s liberation in Oswiecim, Poland, on January 27, 2020 (Wojtek RADWANSKI / AFP)

After the survivors’ testimony, ABMF chairman and World Jewish Congress (WJC) president Ronald S. Lauder paid tribute to them and to the roughly 1.1 million victims of Auschwitz — of whom around 960,000 were Jews — and the rest of the six million Jews killed in the Holocaust.

“This is about you, the survivors, and I cannot begin to tell you how grateful I am that you are here, and in some cases, here with your children and grandchildren,” Lauder said, commending the now-elderly group for having moved forward to rebuild their lives and help found the nascent State of Israel.

This is about you, the survivors, and I cannot begin to tell you how grateful I am that you are here

The day after the high-profile event, the frozen air felt slightly less frenzied than it had in the week leading up to it. Workers slowly dismantled PA towers and prepared to take down the enormous white tent that had held the audience of thousands the evening before. 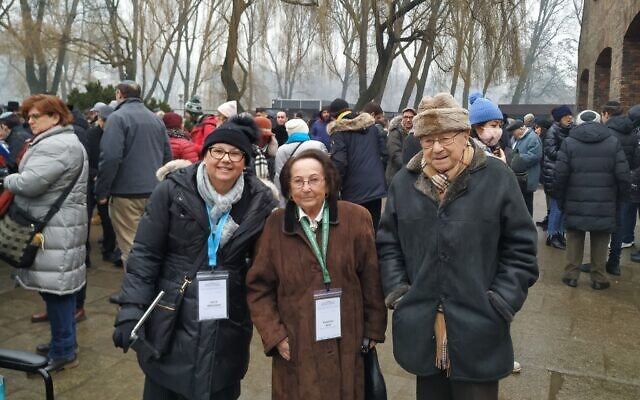 Graf and his family were back at the camp together with a few dozen other members of the WJC and ABMF groups who wanted one last chance to visit, now that things had quieted down a little.

“You have some desire to visit this part of your life, it’s a good closing,” Graf said. “And besides, my daughter came, that she was never here. You know — it’s closure.”

‘A miracle happened to me here’

When walking through Auschwitz together with someone who survived incarceration there, the official tour guides can feel a bit superfluous. If that survivor is Sol Graf, the guides at times are altogether invisible — which is remarkable since he is a scant 5’4” and wife Katarina just barely reaches his shoulder. 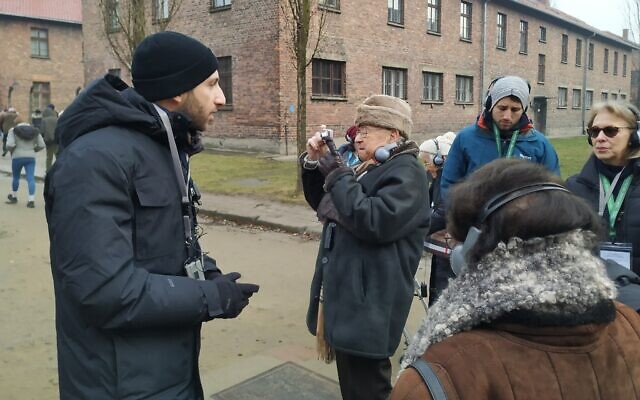 Sol Graf takes a photograph during a tour of the former site of Auschwitz-Birkenau, January 28, 2020. (Yaakov Schwartz/ Times of Israel)

Passing through the metal detectors at the entrance to the camp, Graf carried himself like a VIP. “That’s my wife – treat her nicely!” he commanded a pair of guards delicately escorting Katarina through the security check. A third guard carried her wheelchair above his head.

With a tiny pink point-and-shoot digital camera, Graf snapped photos of the famed gate emblazoned with the words “Arbeit Macht Frei,” the barracks, the monuments, the guard towers. While the guide supplied by the museum expounded on the Nazi methodology at work in the camp, Graf quietly simulcast a more personal tour for his family.

The group was steered down a dirt road identical to all the others, and Graf stopped short. He pointed to a spot along the road. “A miracle happened to me here,” he said. He had been part of a plot, he said, to smuggle potatoes out of the kitchen and into the barracks to share with the starving prisoners. As he carried a sack of potatoes through the streets under the cover of darkness, he saw an SS guard coming quickly up the street.

“He was in such a hurry, he didn’t even stop to check what was in my bag,” Graf said. “If he’d have known what I was carrying, there’s no question he would have shot me right there.” 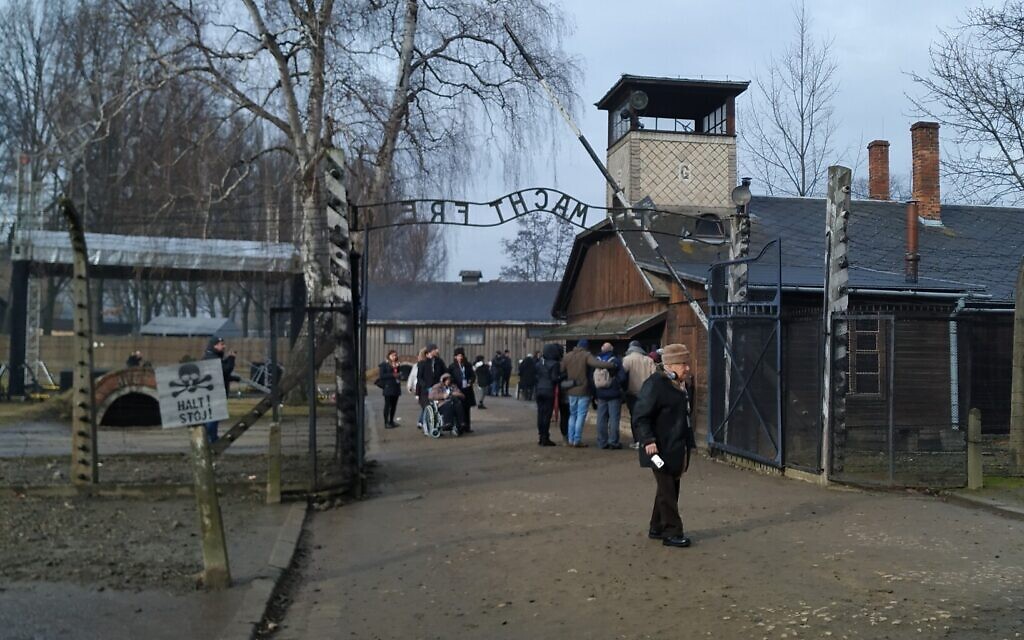 Sol Graf walks through the infamous gate reading ‘Arbeit Macht Frei,’ or ‘work will make you free,’ at the former site of Auschwitz-Birkenau, January 28, 2020. (Yaakov Schwartz/ Times of Israel)

Graf pointed out spots where other “miracles” had occurred – episodes that under any other circumstances would have been considered mundane, but that for him had meant the difference between life and death: a prisoner grabbing him and moving him in the selection line; getting transferred out of Birkenau to a work detail by a block commander who had taken a liking to him.

“You didn’t survive this hell without going through miracles,” Graf said. 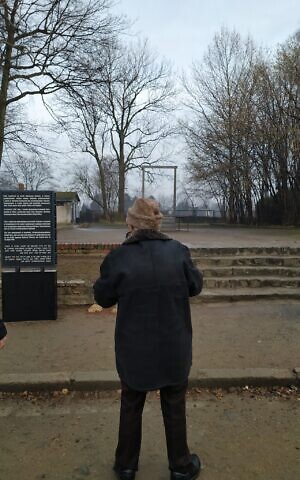 Sol Graf takes a photo of the gallows where former camp commander Rudolf Höss was hanged at the former site of Auschwitz-Birkenau, January 28, 2020. (Yaakov Schwartz/ Times of Israel)

As the guide continued to speak, Graf interjected with little details — some about the general purpose of this building or that, others more personal. He took advantage of a brief pause to ask if the group could swing by Block 7. (“He thinks he’s the only one here,” said the daughter of another survivor under her breath.) Not sure what to say, the guide was noncommittal and asked what was special about Block 7. “That’s where I lived,” Graf said. In hindsight, the answer seemed obvious.

The tour was relatively brief, and the issue of Block 7 wasn’t raised again. Just outside the barbed wire fence, Graf once more stood off by himself, looking at the spot where camp commandant Rudolf Höss was hanged for his war crimes. He photographed the gallows with his little pink camera.

“That bastard,” he said. “The monster. I remember one time he passed us by, it was winter, freezing cold, just like today. And he looked at my group and asked one of the officers why workers like us didn’t have gloves on. ‘Their hands are an important asset,’ he said. The next day, we all had gloves. We were just things to him. Can you imagine?”

When I was here, we had no idea this was a gas chamber

Next to the gallows is what appears to be a reinforced bunker built into a small hill. The building served multiple purposes throughout the course of the war, the guide said. At one point, it had housed a gas chamber and crematorium. While it had been dismantled by the Nazis, the machinery of the crematorium was rebuilt after the war from the parts found strewn nearby. Visitors are now able to see what it had looked like when the facility was equipped to burn human corpses on an industrial scale.

Graf stood along with the group, looking the structure up and down. “You know,” he said matter-of-factly, “when I was here, we had no idea this was a gas chamber.”

‘The last place I saw my father’

There was time to reflect during the short car ride between Auschwitz I and nearby Birkenau, also known as Auschwitz II, where the majority of the exterminations took place. It was where Graf and his parents had first arrived and been subject to selection, and where he’d been separated from them, certain they would both die.

His mother, though, survived the war and moved to then-Mandatory Palestine in 1946 together with Graf and other members of a Zionist youth group he’d joined – including his future wife, Katarina, whom he married that year. 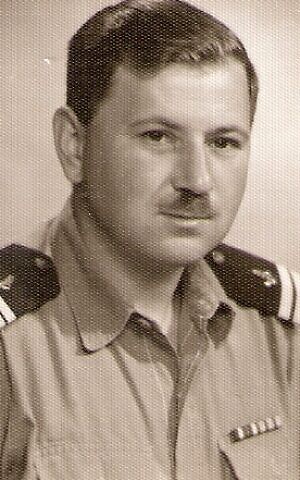 Sol Graf as a captain in the Israeli Navy. (Courtesy)

Graf boasted that he’d fought in the 1948 War of Independence, and then joined the Navy, where he earned the rank of captain. He served until 1966, when the couple emigrated to the United States.

In soft-spoken Hebrew, Katarina told The Times of Israel how she lost both her parents at Auschwitz, and moved to the soon-to-be Jewish state with no relatives. She worked as a grade school teacher and then, when Sol was stationed in the country’s south, became a social worker there, helping newly arrived Jewish families streaming in from the surrounding Arab countries. Her job, she said, was to help the Middle Eastern Jews integrate into the blossoming Israeli society.

Because the ABMF tour was geared toward survivors, most of whom couldn’t make the long trek across the grounds, the small buses transporting the groups from Auschwitz I to Birkenau drove up to a small gate at the back of the camp. Ahead, row after row of barracks stretched on for what seemed like miles. Some were empty but intact; others were razed by the fleeing Nazis so that only their foundations remained. 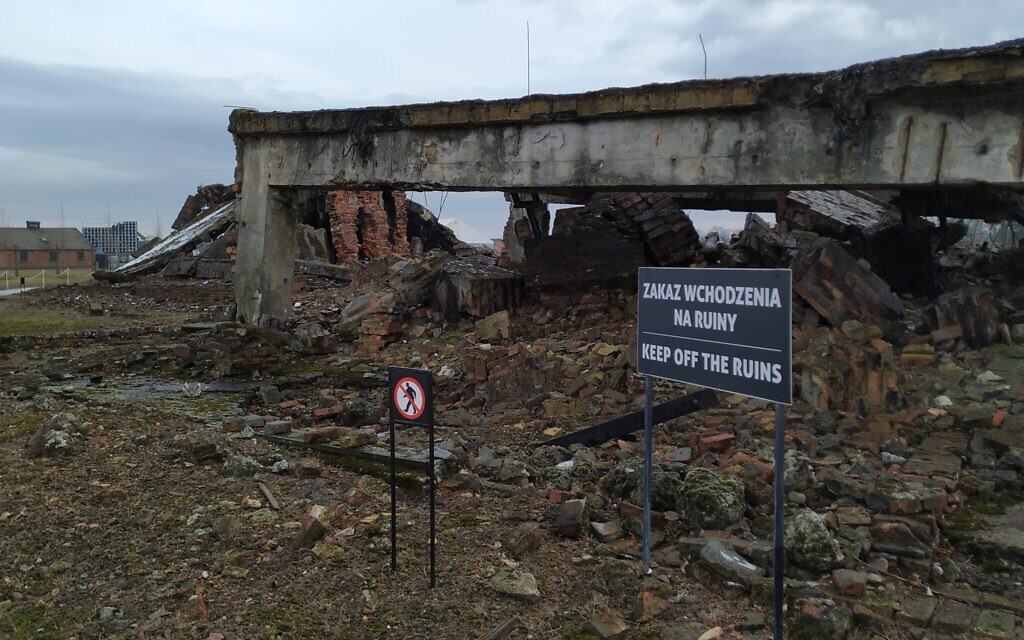 The ruins of gas chambers and crematoria at the former Auschwitz II-Birkenau, January 28, 2020. (Yaakov Schwartz/ Times of Israel)

Stepping inside the camp, the remains of gas chambers and crematoria — also destroyed by the Nazis in order to cover up their crimes — were visible to both the right and the left. Between them was a large open plaza and a monument to the many victims, just in front of the spot where the train tracks terminated and the Jews were herded out for selection. It took less than one minute to walk from the track’s end to the former gas chamber.

“That’s the last place I saw my father,” Graf said, pointing to a spot near the end of the tracks. “He was just sitting there on the ground, too weak to stand, because he had already had tuberculosis for some time.” 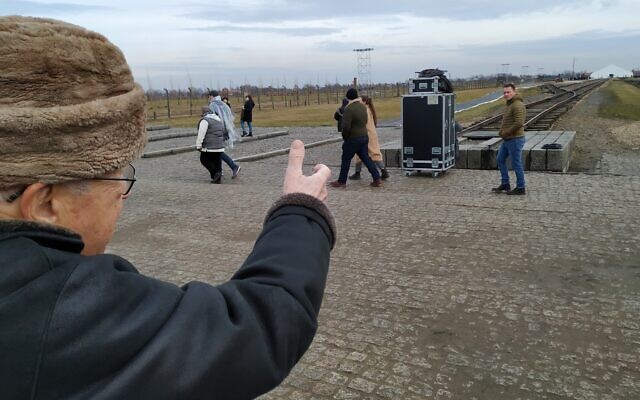 Sol Graf points to the last spot he saw his father, where the tracks terminate in the former Auschwitz II-Birkenau, January 28, 2020. (Yaakov Schwartz/ Times of Israel)

Graf said that his father had been placed in another cattle car, probably one for sick people. It was coincidence that he spotted him sitting there among all the chaos upon arrival, Graf said.

My father, he called me over and he gave me his heavy winter coat that he was wearing – never mind that it was summer, we brought whatever we could to survive

“My father, he called me over and he gave me his heavy winter coat that he was wearing – never mind that it was summer, we brought whatever we could to survive. And he took off the coat, and gave it to me, and said, ‘You will need this more than me,’ like he knew the end was coming. I took the coat, and then they made us walk down there,” Graf said, gesturing towards the white tent that had held the previous day’s crowd. “I never saw him again.” 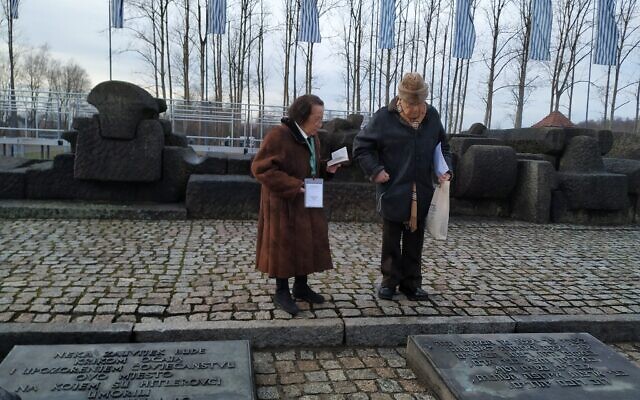 Sol and Katarina Graf near the memorial between the gas chambers and crematoria at the former Auschwitz II-Birkenau, January 28, 2020. (Yaakov Schwartz/ Times of Israel)

Finished talking, Graf turned back to his family. Across the square, members of a motorcycle club, dressed in heavy black leather vests, knelt in front of a monument to the tens of thousands of Poles who died in the camp. Other families stood in groups listening to their grandparents’ and great-grandparents’ stories. Some of the younger members sobbed. Tour groups speaking different languages tried to keep their footing as they slid across muddy footpaths to see the crematorium ruins.

Graf and his wife Katarina went over to the monument and said the Jewish prayer for the dead.