Yair Golan was first exposed to the harsh glare of the public spotlight when, as IDF deputy chief of staff, he ignited a firestorm of criticism by telling an audience during the 2016 state Holocaust memorial ceremony that he saw trends in today’s Israel reminiscent of those in Europe prior to the Holocaust.

“If there is something that frightens me in the memory of the Holocaust, it is identifying horrifying processes that occurred in Europe…70, 80 and 90 years ago, and finding evidence of their existence here in our midst, today, in 2016,” Golan said in a strongly worded speech uncommon for a military commander.

The general’s comments drew immediate censure from across the political spectrum; even those who sympathized with his intent said his choice of words and his timing were poor. Prime Minister Benjamin Netanyahu, leading a barrage of criticism from the right, castigated Golan, calling his remarks “outrageous” and saying that they “create contempt for the Holocaust.” Amid the outcry, Golan quickly clarified the comments, saying he had not intended to liken Israel to Nazi Germany.

On Monday — speaking to The Times of Israel days after a unity deal between his Israel Democratic Party, Meretz and Labor deserter MK Stav Shaffir that saw him placed third on the newly named Democratic Camp’s Knesset slate — Golan said not only that he stood by those 2016 comments, but that they were the reason he had decided to go into politics. 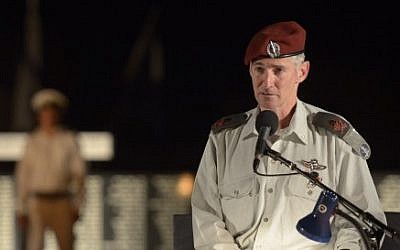 “I think everything I said in the Holocaust Day address has, in fact, been backed up by the events of the last three years — with corruption, with the processes I spoke of,” he said in a phone interview.

Golan, a well-regarded officer who held a number of top positions during his 37-year military career, had called for a “thorough consideration” of how Israeli society treats the disadvantaged and “the other” in its midst, warning against growing callousness and indifference toward those outside the mainstream.

“I had no intention to say that we are exactly like the Nazis; that would be a stupid thing to say. I have no intention to say that what we have here is exactly the same,” the former major general stressed in our conversation. “But, you know, we need to take some lessons from history and we need to be both highly sensitive and highly critical when dealing with ourselves.”

According to the 57-year-old Golan, former prime minister Ehud Barak, who recruited Golan last month to his nascent Israel Democratic Party, decided to reenter politics precisely in order to put an end to the “processes” Golan had highlighted in his Holocaust Day speech. 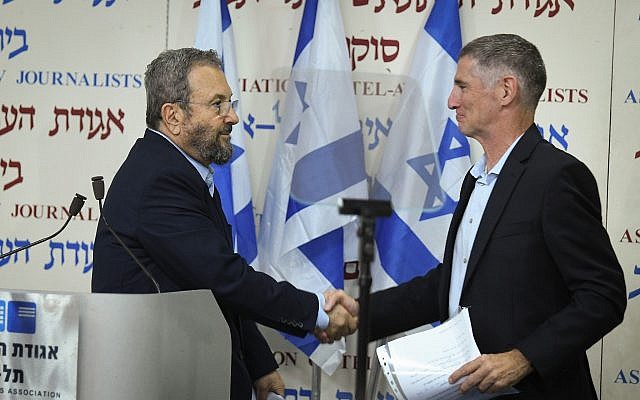 “It’s very simple. Ehud Barak reentered the political arena for my one main reason — to change the government, and that is what we need most,” Golan said, defending the former prime minister’s decision to form yet another party challenging Netanyahu from the left.

In their first press conference last Thursday, the leaders of the newly formed left-wing alliance, the Democratic Camp, vowed to work to deny Netanyahu another reelection on September 17.

“We are embarking on a path that in a month and a half will lead to replacing the current leadership and bringing about social change,” said Nitzan Horowitz, chair of the Meretz party, who will lead the joint slate on election day. The new party, Horowitz said, will defend Israel from the “racism, corruption, occupation and religious coercion” spearheaded by the Netanyahu government.

Despite various reported internal policy disagreements, the new party, in the merger agreement signed by each faction, commits to three key principles that place it firmly on the left: seeking out a peace deal with the Palestinians on the basis of the two-state solution; not joining a right-wing government; and canceling the controversial Jewish nation-state law passed last year, which enshrines Israel as the nation-state of the Jewish people and was criticized by minority groups for failing to include a commitment to equality for all Israeli citizens.

While there may be other worthy parties in the political arena, in Golan’s telling, only a left-wing union with Barak in a senior leadership role can truly mend the ills that warrant likening aspects of today’s Israel to pre-war Germany. 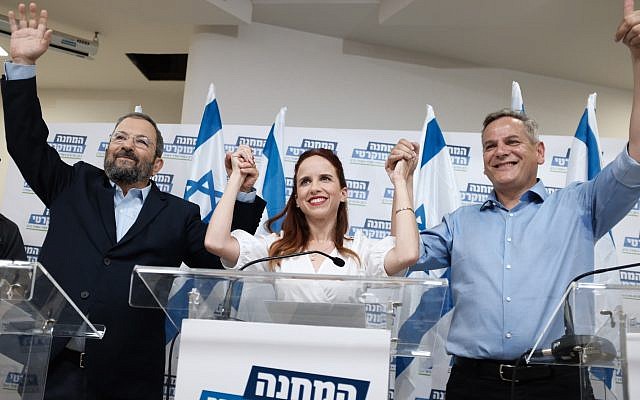 Citing a host of issues, from religion and state to attitudes toward the two-state solution, Golan said that he and Barak “came to the political arena for one main purpose: to invigorate the political system, to fight the Netanyahu government bitterly and to unify the central-left part of the political system because it doesn’t make sense to have two, three parties that, in fact, hold pretty much the same ideology.”

Asked if he felt that the merger with Meretz and Labor’s Shaffir met that goal, Golan admitted that it would have been “much, much better,” had the entire Labor party joined, but said had not given up on bringing the party and its leader, Amir Peretz, into the fold.

“I still haven’t lost hope and maybe, maybe in the coming few days we will also see Amir Peretz joining us,” Golan said, conceding that with just two days left to file final party slates, the odds were “indeed slim.”

The announcement of the alliance last week came amid lingering anger on the left over Peretz’s decision to merge with former Yisrael Beytenu lawmaker Orly Levy-Abekasis’s Gesher party, which is further to the right on the political spectrum and failed to pick up enough votes to enter the Knesset in April’s elections.

Polls have since predicted a solid showing for the Democratic Camp — between eight and 12 Knesset seats — with Labor suffering and dropping to just five seats in two of three surveys released over the weekend, barely above the electoral threshold. 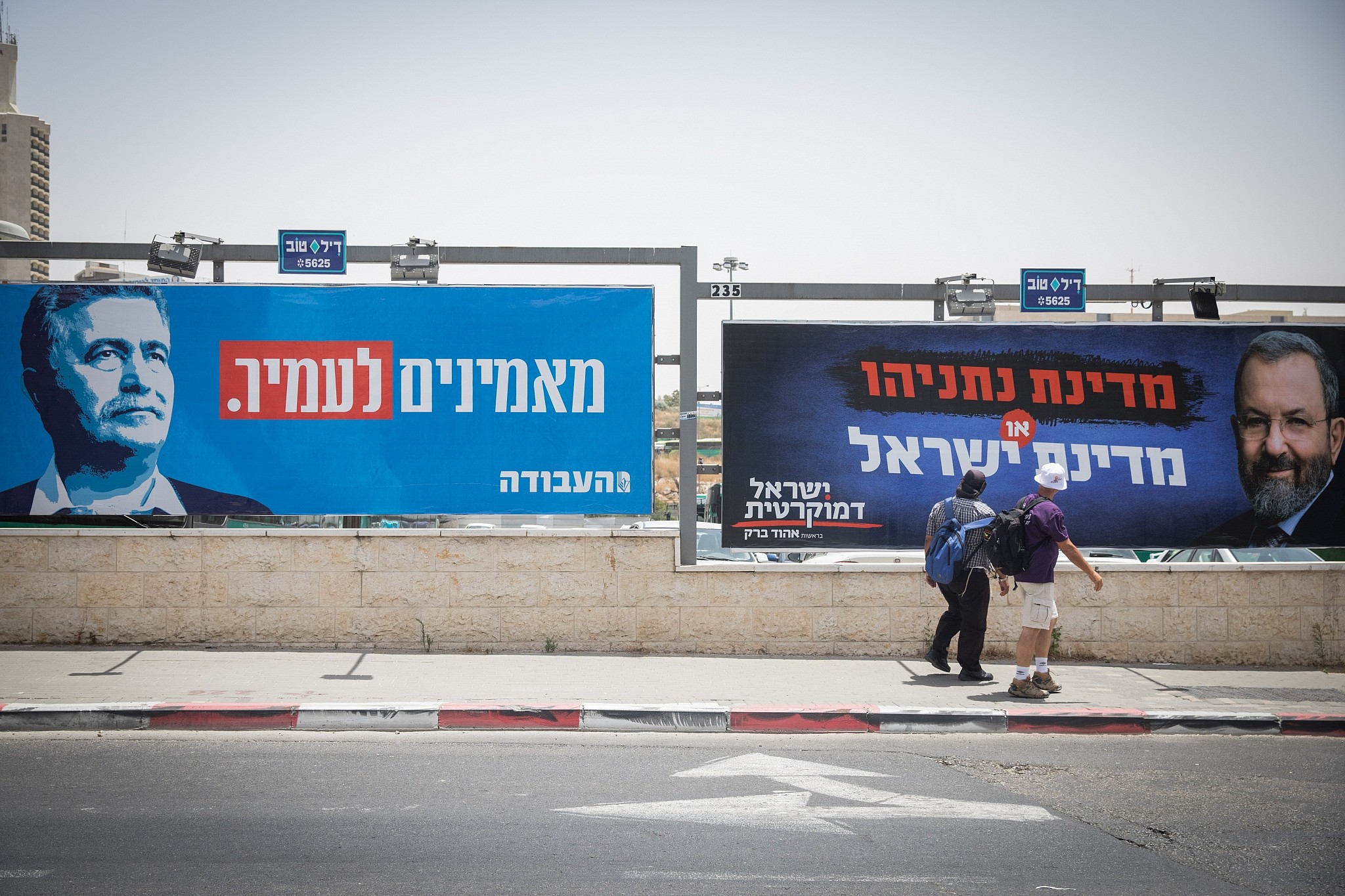 Splitting the electorate or expanding it?

In the April election, the ruling Likud party and rival Blue and White gained 35 seats apiece in the 120-seat Knesset but, without the support of Yisrael Beytenu’s stubborn leader, Avigdor Liberman, neither was able to form a majority coalition.  With no clear solution to the deadlock, both parties are now again building their campaigns around outscoring each other, with the hope that by gaining more seats than the other, President Reuven Rivlin will task them with forming a government, regardless of the coalition math.

The Democratic Camp throws an unapologetic wrench into Blue and White’s plan: The left-wing union’s relatively encouraging initial poll numbers come at the direct expense of the centrist party, which dropped to just 23 seats in one poll over the weekend.

Golan nonetheless asserts that having the Democratic Camp and Blue and White running separately as anti-Netanyahu parties would not harm the chances of unseating the prime minister.

“What is important is the bloc, not the parties,” Golan said, referring to the collective strength of the center-left and left-wing slates, an assessment rejected by both Likud and Blue and White. 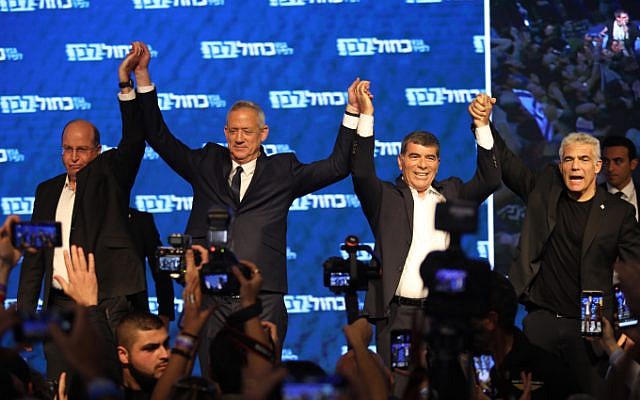 According to Golan, the emergence of the Democratic Camp in fact creates an opportunity for Blue and White to move right and siphon voters away from Likud, thus “expanding and increasing” the overall bloc. “This is the basic assumption. They will go right, which will be very positive, and I think it’s feasible they could get [support],” he said.

In contrast to his call for Labor to join the union, claiming the two agree on most issues, Golan says that Blue and White, while being a “positive party” and a likely political partner, is not on the same page as the Democratic Camp, and should not merge with it.

His party and Blue and White differ primarily on “the attitude toward to conflict with the Palestinians,” Golan said, criticizing Blue and White for adopting “a lean back and wait and see approach, which is totally unacceptable.”

Barak, in his comeback promises, vowed “to set Israel’s borders within two years of establishing the government,” and to push to end Israel’s military occupation over the Palestinians in the West Bank.

“Just as Barak promised to remove Israel from the Lebanese quagmire within a year, and did so, we will keep this commitment,” the party said in a statement early this month. 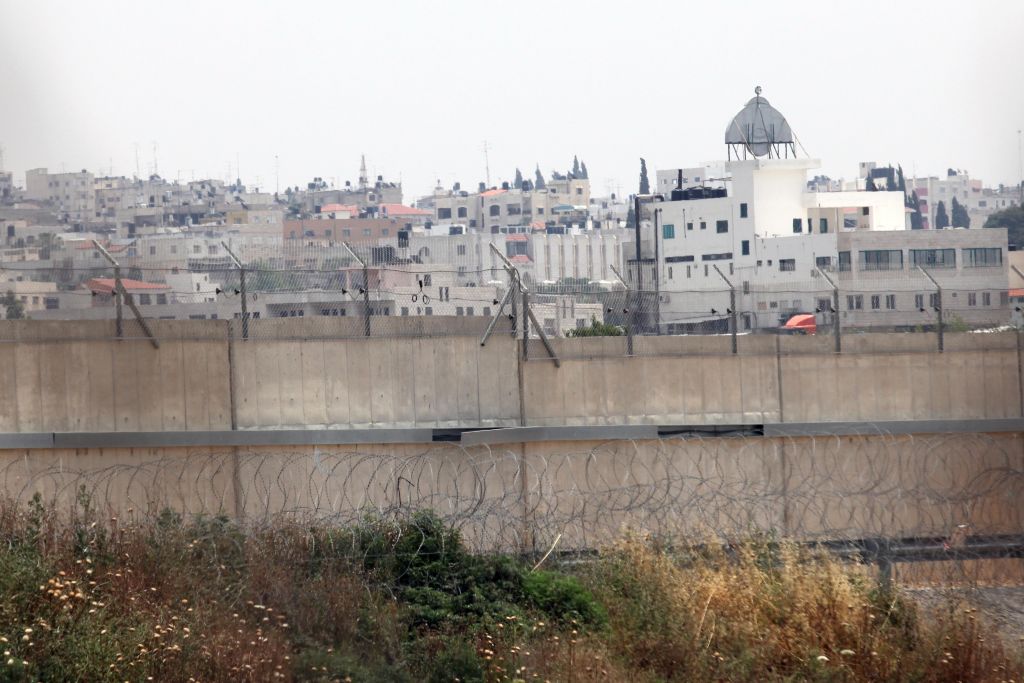 While stressing that “we need to take initiative, we need to do something,” Golan appeared to hedge his bets when committing to actually forming a Palestinian state within Barak’s deadline.

“In two years’ time, all that’s needed to be done is to mark the borders, to tell the Israeli people, ‘These our borders,'” Golan specified, explaining the idea of “setting borders” as an Israeli declaration of where the future frontiers will be drawn regardless of any negotiations that might take place.

Golan described that step as “the continuation of Ariel Sharon’s disengagement,” in which the government forcibly removed some 10,000 Israeli settlers from their homes in the Gaza Strip and northern West Bank. “It’s just the next phase. It may be a very modest one, but it tells the Israeli people where we are headed.

“The basic question facing the Israeli Jewish people is very simple: whether we intend to annex [the West Bank] and the Gaza Strip, or want a separation from the Palestinian people. To my mind, the answer is very simple — we need to separate. If we want to keep the Zionist project alive, we cannot afford a situation where we annex 2.5 or 4.5 million Arabs,” Golan said emphatically. “It’s totally unacceptable. It’s crazy. It would ruin the Zionist project on our own.” 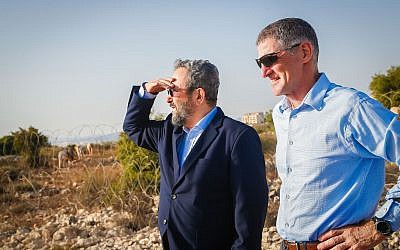 In terms of a long-term solution, “it could take three, four, or 10 years. It doesn’t matter. It truly doesn’t matter,” Golan said. “People should understand that, all right, these are the future borders, even without approval by the Palestinian Authority or any other Palestinian entity. This is not the issue.

“We need to tell the Jewish people, the Israeli people, ‘These our borders.’ We may need many more years in order to finish the process, but we should start by marking our borders,” he repeated.

More than anything, Golan said that pushing to bring about “an end to this conflict” would be the biggest contribution that the Democratic Camp, Barak, and himself can make to Israel’s crowded political arena.

“What we really need is courageous leadership. This is something we’ve missed for the last 10 years,” Golan said, “and it’s something we can offer.”