TIBERIAS — It’s a Tu Bishvat dream come true for Tiberias residents: The Sea of Galilee is at its highest level that most can remember.

“We’re at the top level of excitement that people reach around here,” said Rami Ben-Tzvi, 72, standing by the rowing club that he runs. He looked in amazement at the water in front of him. Although the level is still 210.04 meters (689 feet) below sea level, it’s some 1.75 meters (5.74 feet) higher than at the start of January.

Ben-Tzvi said the last time he can remember such a scene at the Sea of Galilee, Israel’s largest source of fresh water, was during the major storms of 1992. He noted that it’s a new sight to many locals.

Rain since early January has been so plentiful that if the downpours predicted for the rest of this week take place, the water level could soon rise by around 1.25 meters (4.1 feet), at which point a city accustomed to worrying about drought would be at risk of flooding.

If flooding looks possible authorities will intervene. If water nears the “upper red line” of 208.8 meters below sea level, they will open a dam at Kibbutz Degania, allowing water to flow in to the Jordan River as they did in 2013. 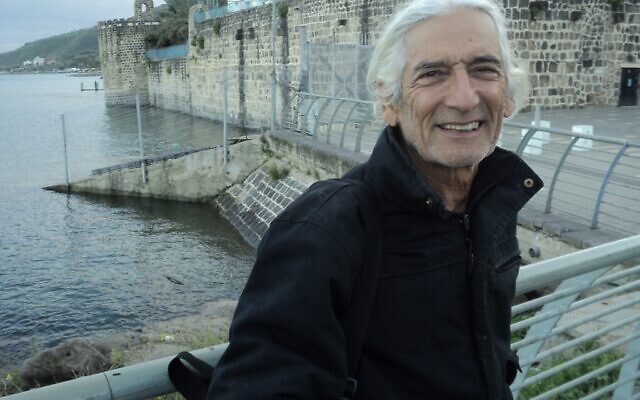 Rami Ben-Tzvi in Tiberias, Israel, with the jetty of his rowing club in the background, on February 9, 2020. (Nathan Jeffay/Times of Israel)

Tiberias residents are anticipating a dam opening as a momentous occasion — and talk about the latest water level with the giddiness that sports fans discuss results when their teams win. Experts say that opening the dam would be good for Israel and the region.

Steve Brenner, a water specialist from Bar-Ilan University, told The Times of Israel that opening the dam would benefit the Jordan River, and in turn raise the level of the Dead Sea. Uri Schor, spokesman for Israel’s Water Authority, said that the chance of the dam opening is 50%. 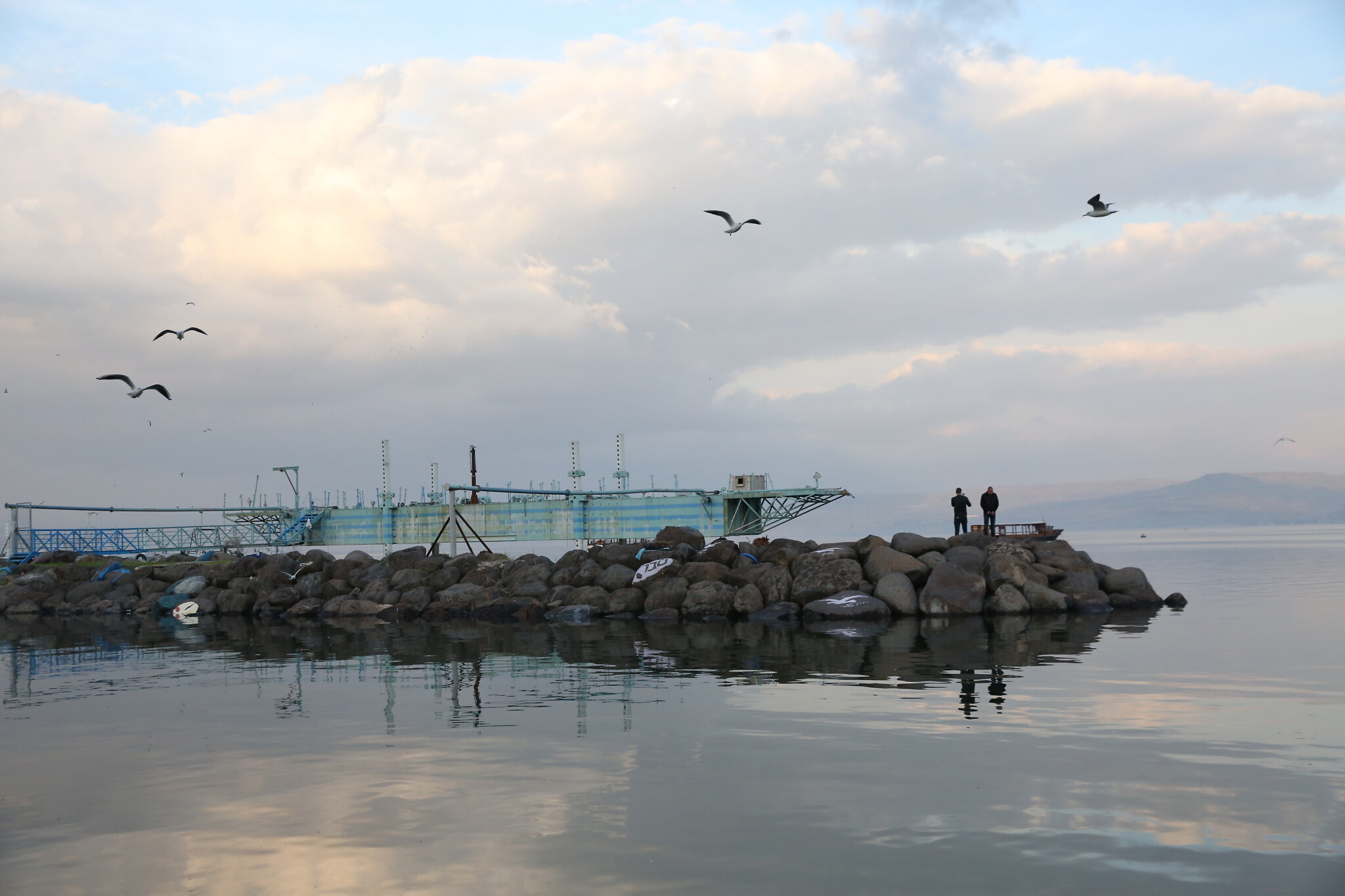 As Ben-Tzvi spoke, he pointed at a concrete jetty that his rowing club uses. “It’s 20 meters [65 feet] long, and most of it is normally dry, but today most of it is in the water and only five or six meters [roughly 16-20 feet] are dry.”

He was so delighted that he brought his granddaughter to work for the day, to see the water. He said it was a perfect trip for Tu Bishvat, the so-called New Year for Trees, when Jewish people celebrate nature.

Masouda Daout, 80, sat by her walker, on the lookout for customers for her jewelry, some of which reflects her Iraqi-Jewish heritage. “Everyone is talking about the water,” she said. “Everyone is happy about it — delighted.”

Michael Ben-Yaish was standing on a stall encouraging tourists to sign up for his boat trips. “This is going to be really good for domestic tourism,” he said, predicting that the next few days will be busy. 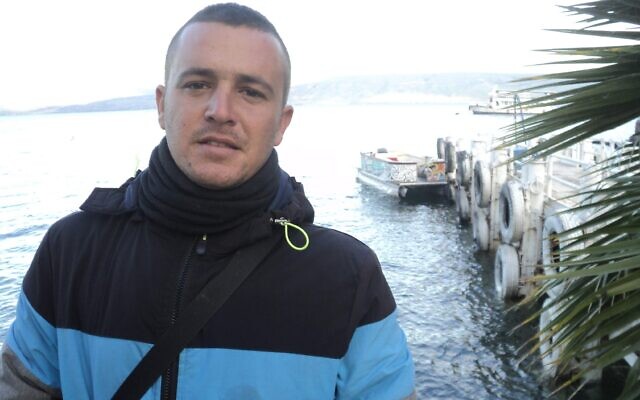 He pointed to the water behind his stall. “This used to be dry land. A few years ago we were really worried about the Kinneret, but look at it now,” he said, using the Hebrew name for the Sea of Galilee.

As recently as 2018, Israel’s Water Authority warned that the Sea of Galilee was drying up as a result of low rainfall, and warned that it was approaching the “black line,” after which damage to the water quality from silt and other problems is likely to begin.

Schor, the Water Authority spokesman, said that Israel generally has a water shortfall, but the situation is getting worse due to population growth and other factors. Blaming climate change, he said, “We get less and less rain on average in recent years, and before last year there was five years of severe drought, mainly in the north and the Sea of Galilee.” 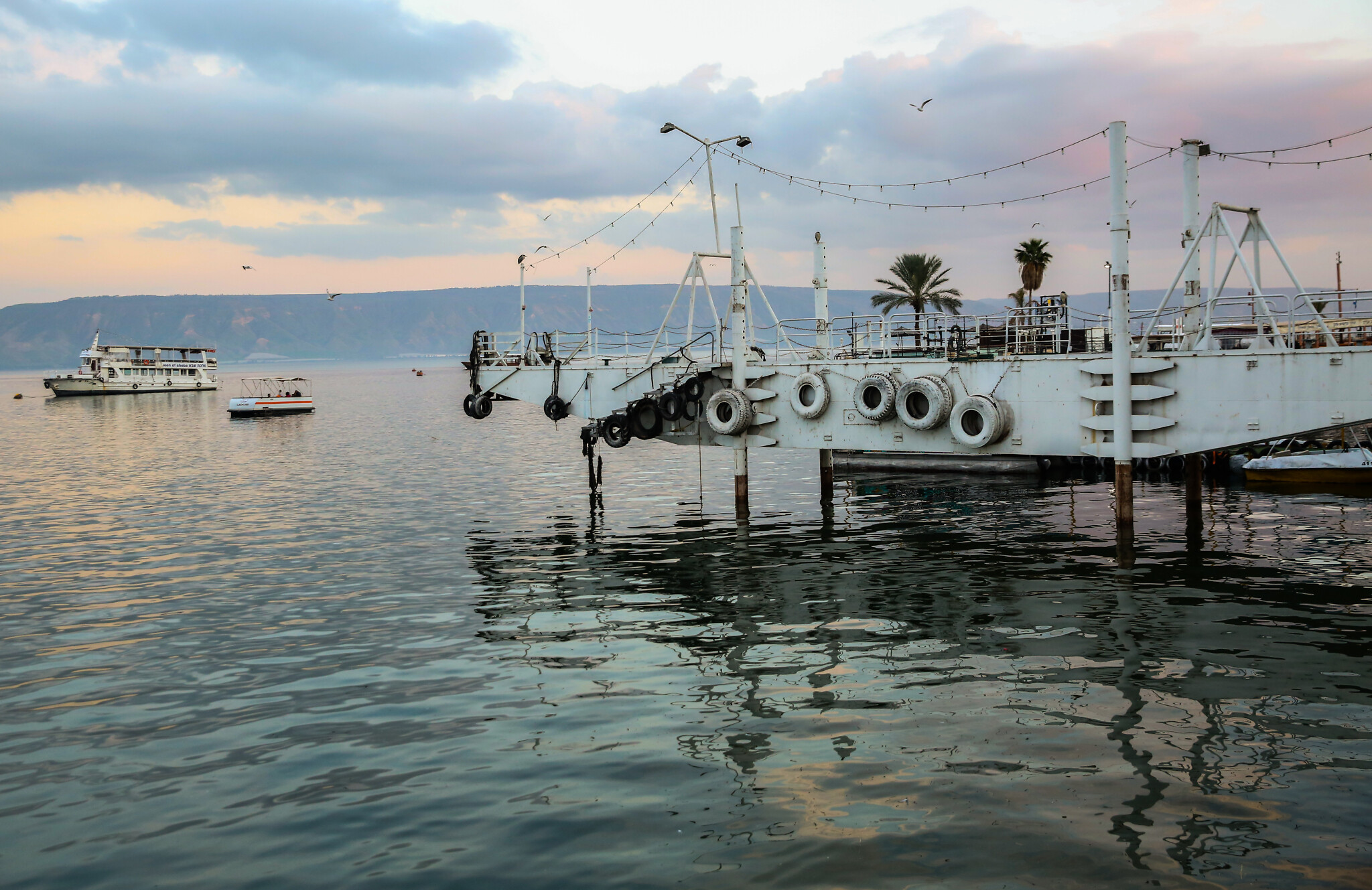 Schor said that good management, as well as good rain, contributes to today’s positive developments. During the years of drought his authority took less water than normal from the Sea of Galilee: 30 million cubic meters (just over a billion cubic feet) per year — a twelfth of the norm.

Chen Lankry, struggling to keep up with demand on his crepe stall, had the bad times in his mind. “Just a few years ago we were really worried, almost fearing that the Kinneret could disappear,” he said woefully.

Then in an upbeat tone, 37-year-old Lankry marveled: “Now, people are coming from all over to see this water.” 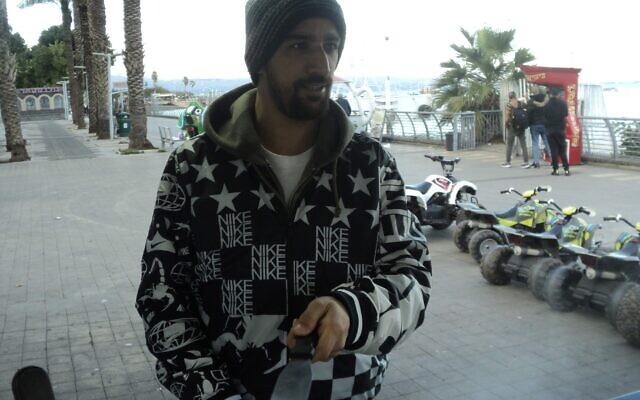 Chen Lankry at his crepe stall in Tiberias, Israel, on February 9, 2020. (Nathan Jeffay/Times of Israel)

And he wasn’t exaggerating. At the water meter, where the Sea of Galilee’s level is constantly displayed, a Palestinian family from Jenin in the West Bank was admiring the water. They didn’t want to give a comment for this article, but the son Imhama Sai, 20, was keen to be photographed. A few feet away two ultra-Orthodox men were talking about the water level in Yiddish, and nearby, Pieter Tirul, an Austrian tourist, had climbed an abandoned ladder to get the best angle of the Sea of Galilee for his photos.

A group of Canadian Christians were out souvenir shopping. As one of them shouted to his friends about the cheap prayer shawls, Sylvia Scullion, a 62-year-old homemaker from Windsor, Ontario, said she was moved to be visiting when the Sea of Galilee was so high. 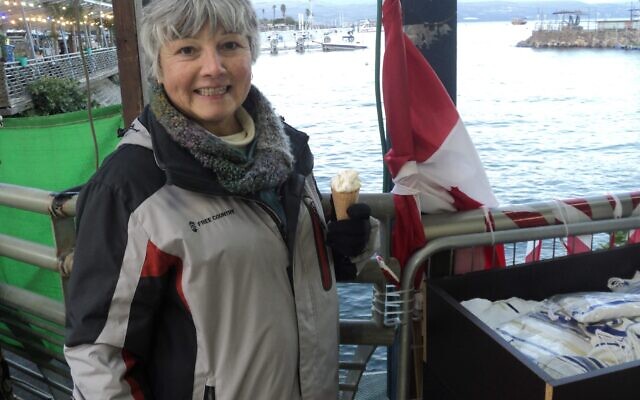 “We’re so excited,” Scullion said. “Jesus walked on this water, and the level is so high today that from standing here on the dry land I can put my hands in to it.” She added: “Rain is a blessing.”

Violet Vladi, 33, had brought her kids and her niece from Nof Hagalil, formerly Nazareth Illit, saying it was meaningful to make the trip just before Tu Bishvat given nature’s reliance on water. “It’s a feeling of utter ‘wow,’” she said. “I remember seeing this kind of scene last when I was a teenager. It’s just so good for the land when the Kinneret is full.”

Shadi Nakas, 39, had made the journey from Nazareth, which neighbors Vladi’s city. “It’s a huge change from recent years so I wanted them to see it,” he said, pointing to his kids, adding that in his mosque congregants pray for rain. 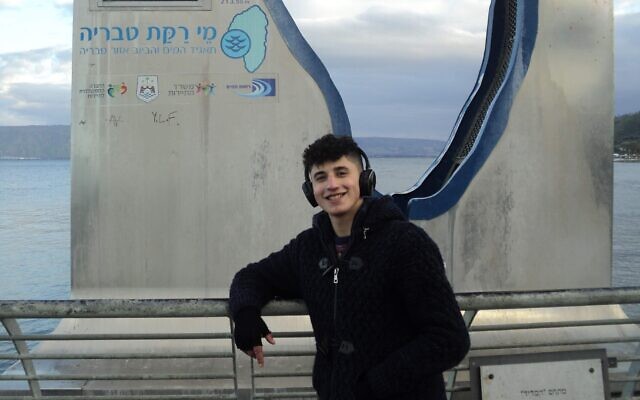 At the cellphone shop by the promenade, a customer waited patiently for the owner to emerge from the back where he could be seen praying mincha, the Jewish afternoon prayer. When Shimi Ben-Nissim, 44, finished, he said he had thanked God for the rain.

“I’ve lived in Tiberias all my life and I can’t remember weather like this. It’s a feeling of wonder, like something magical is happening,” said Ben-Nissim. 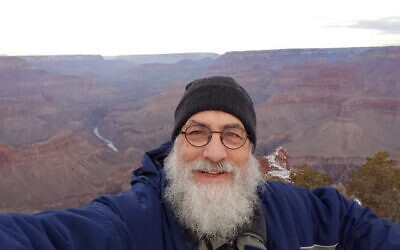 Brenner, the water expert, a professor at Bar-Ilan University’s Department of Geography and Environment, said that desalination, which now provides around a quarter of Israel’s water needs, has made the Sea of Galilee less important as a day-to-day source — but people are still right to be rejoicing as it fills up.

“Even if we’re relying more and more on desalination, the Kinneret is still a strategic water asset,” he said. “Having the water there and managing it is still as important as it was 10 or 20 years ago. We have five major desalination plants and if just one went offline due to breakdown, terror or vandalism, that would significantly impact supply and it would be important to fall back on the Kinneret.” 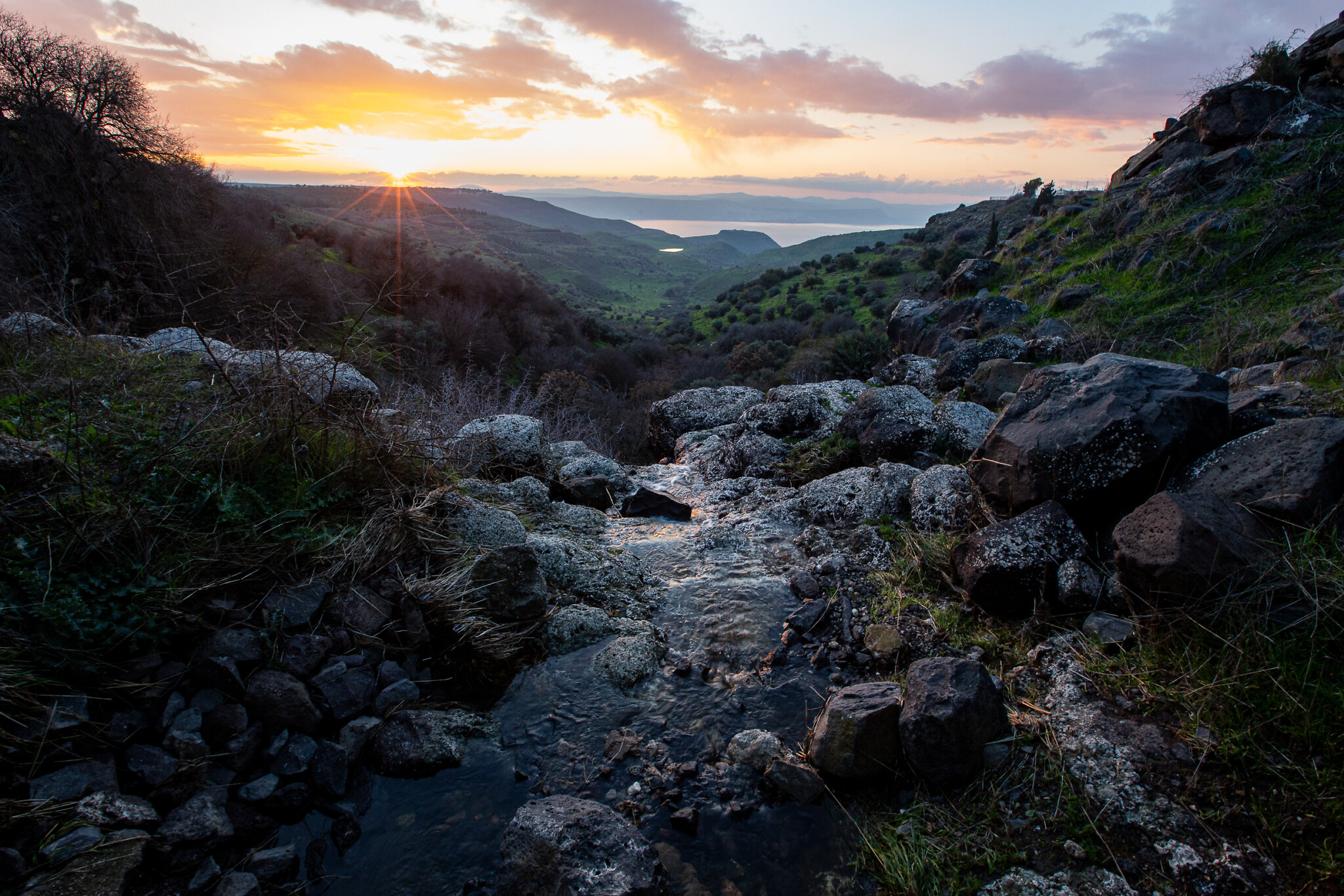 View of the sun set at Ein Pik overlooking the Kinneret, the Sea of Galilee, in the Golan Heights, on January 22, 2020. (Maor Kinsbursky/Flash90)
Learn Hebrew in a fun, unique way