NASA astronaut Jessica Meir misses hugs. She had looked forward to embracing her loved ones upon returning to Earth on April 17 after spending 205 days in space. But because of COVID-19 and the need for social distancing, she’s resigned herself to waiting a little longer.

“That was the hardest part of me; not getting to hug anyone for seven months and then coming back to Earth and still not being able to hug anyone,” Meir said.

The Times of Israel interviewed Meir nearly two months after she landed safely in Kazakhstan in a Russian Soyuz spacecraft following a seven-month stint aboard the International Space Station. It was Meir’s first space mission, and the fulfillment of a childhood dream, long before she was selected as a member of NASA’s eight-member class of 2013.

While on the mission, Meir made history as a member of the first all-female space walk, when she and fellow NASA astronaut Christina Koch exited the ISS on October 18, 2019 for more than seven hours to replace a power controller. Meir subsequently completed another two spacewalks with Koch, for a total of 21 hours and 44 minutes outside the Space Station.

Following an unusually complicated  process to retrieve and return Meir and NASA colleague Andrew Morgan to Houston due to COVID-19, the two went directly into a weeklong quarantine at the Johnson Space Center.

“One of the big reasons for the weeklong quarantine was that astronauts can sometimes have a dysregulation of the immune system in flight, or sometimes post-flight. We can have a reduction in the number of T cells in our immune systems, and we sometimes have a reactivation of latent viruses that manifest themselves during the mission, or after it. Essentially we are a little bit like immunocompromised individuals, and of course, they didn’t want us to come into contact with COVID-19 in that state,” Meir explained.

Although Meir is now back at her own home, she interacts only with a limited number of NASA personnel. Her family members, including her 75-year-old mother, have been unable to fly in to see her because of flight restrictions stemming from the pandemic. 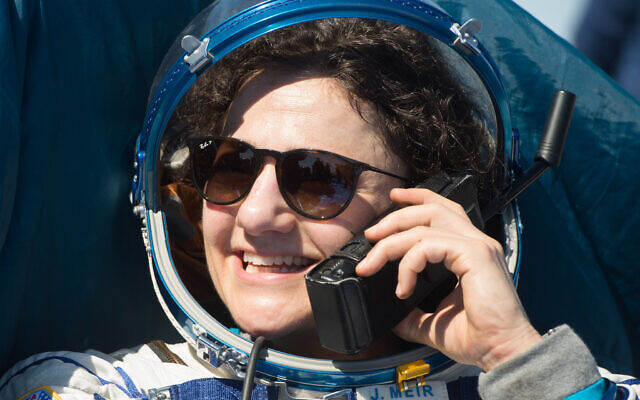 NASA astronaut Jessica Meir talks to her mother on a satellite phone outside the Soyuz MS-15 spacecraft after she lands with NASA astronaut Andrew Morgan and Roscosmos cosmonaut Oleg Skripochka in a remote area near the town of Zhezkazgan, Kazakhstan on Friday, April 17, 2020. (NASA/GCTC/Andrey Shelepin)

Aside from driving almost daily to NASA for medical testing and physical conditioning to rebuild her strength after more than half a year in microgravity conditions, Meir has conducted her work — mainly debriefings, media interviews and outreach events —  online from home.

Despite all the intensive training Meir received prior to flying into space, she said that her experience at the ISS, and especially on the space walks, was beyond expectation.

I knew it would have a profound effect on me. It was even far more incredible than I imagined

“It was even more extreme than I imagined. I dreamed about going to space my entire life and I knew it would have a profound effect on me. It was even far more incredible than I imagined… It was almost surreal that it was actually happening,” Meir said. 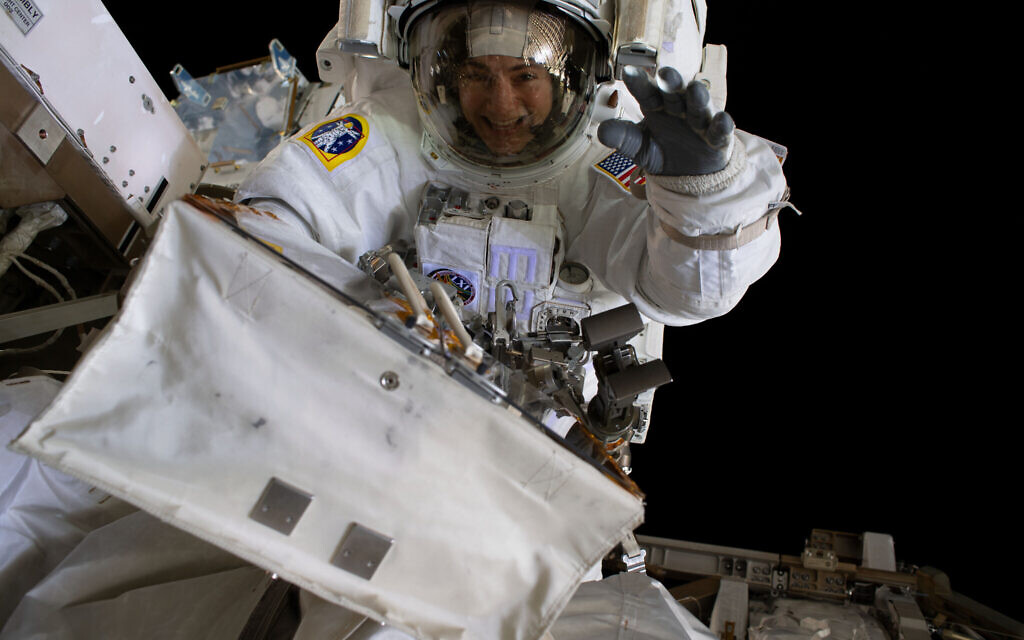 NASA astronaut Jessica Meir on one of three space walks during her ISS mission. (NASA)

“You can’t prepare for how it feels for your body to be floating all the time and looking down at Earth from that perspective. I was literally smiling for almost the entire seven months. I was the happiest I’ve been in my life, and consistently happy the whole time. I really felt at home and in my element, like where I belonged,” she said.

Meir had all the technical aspects of her job down pat after practicing repeatedly on hardware on Earth, including while wearing a space suit in a pool. The ISS crew relied on familiar procedures for various tasks during their long work days, and muscle memory kicked in during the spacewalks.

I really felt at home and in my element, like where I belonged

Getting used to doing everyday tasks like eating, brushing one’s teeth and going to the bathroom in space turned out to be the greatest challenge. It took Meir all her mental power in the first weeks aboard the ISS to figure out how to function in volumetric space, where there is no gravitational vector coming down on you.

“I might put something down on the floor, but I might just as equally put it up there on the ceiling or on the wall. We have racks and equipment on all four surfaces of the space station. Our brains are just not used to thinking like that. The first few weeks my brain would do this flip flop interpreting the ceiling as the floor,” Meir said.

Meir noted that she could actually feel her brain trying to adapt, which it eventually did after a few weeks.

It shows how much plasticity there is in the human brain

“It shows how much plasticity there is in the human brain,” she said.

Meir was fortunate not to suffer space motion sickness upon arriving at the ISS, or to have vestibular system problems upon her return to Earth. However, she did initially feel very tired and rather unsteady when she got home. 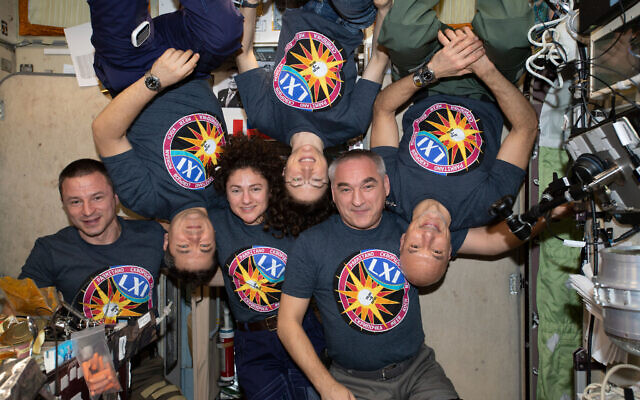 Once back from space, “You literally feel gravity. When you sit down, you feel like someone is pressing you into the chair. When you’re lying on the couch, you feel like you’re being pressed into it,” she said.

Meir is thankfully feeling pretty much like herself at this point. However, her running speed is not what it used to be, a phenomenon she attributes to the difference between her stride on the treadmill in space (where she was loaded only at about 70%), versus carrying her full body weight back on Earth.

When asked about some of the scientific experiments she was involved with, Meir spoke excitedly about several physiological ones. They are all designed to keep astronauts healthy and safe on future short and long duration missions, and to further or support medical research on Earth.

One experiment, called “vascular echo,” uses ultrasound and blood pressure measurements to look at the blood vessels in the human body. The international team working on this have found that the walls of the carotid artery become thicker and stiffer in space.

“This means that six months of space travel is equivalent to about 20 to 30 years of aging in some cases. Whether of not this persists or reverses itself, and what the mechanism is behind it, they are trying to look into the factors behind that. Obviously this is something significant that we need to make sure we understand,” Meir said. 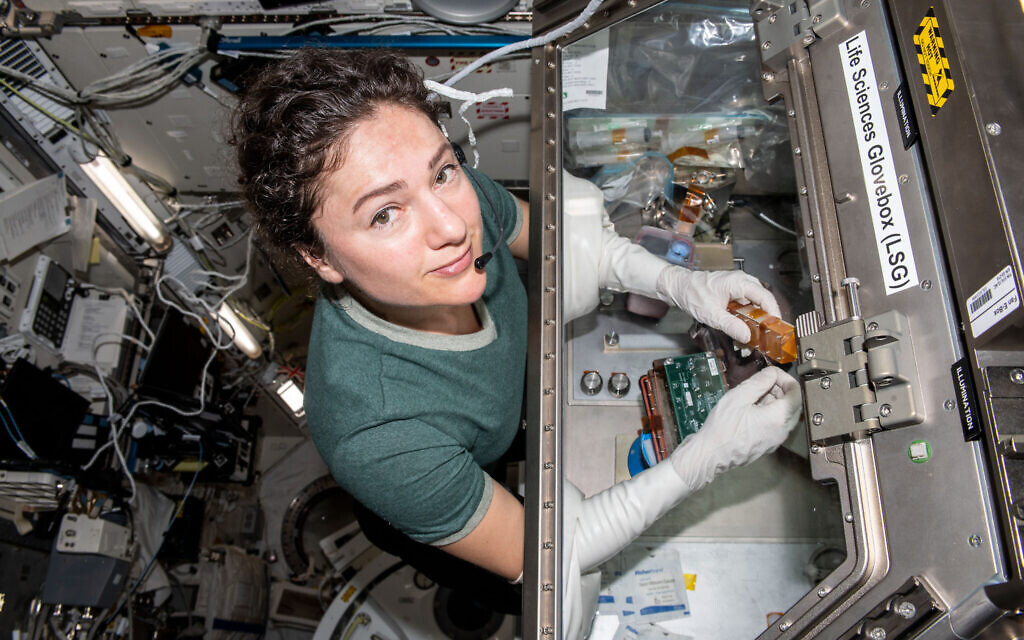 Astronaut Jessica Meir working on a scientific experiment on the ISS. (NASA)

Another experiment addresses the scarcity in the world of organs for transplant, as well as the difficulties posed by gravity in growing cells into layers of tissues that can become organs. The “biofabrication facility” — a 3D printer that uses human tissue to print — on the ISS is tackling the problem. Meir printed heart cells and cartilage for the meniscus of the knee.

“The hypothesis is that without gravity, you could grow layers of tissues to fashion into organs. I’m not saying that we will necessarily have an organ manufacturing facility in space, but the results of these experiments certainly will inform us about the processes back on Earth,” Meir said.

Meir sent her personal effects up to the ISS in a cargo vehicle ahead of her launch last September 25. She’s still waiting for many of them to be returned to her. Among them were her now-famous Hanukkah socks, which she featured in a Tweet last December.

“It was my most famous post — who knew?!” she exclaimed.

Happy Hanukkah to all those who celebrate it on Earth! #HappyHanukkah pic.twitter.com/FKC2M5iXni

Meir, who identifies as Jewish and whose father was an Iraqi-born Israeli, took a number of personally important mementos with her into space, including an Israeli flag. She also brought along a Swedish flag to honor her Swedish-born mother, as well as a pair of watches that her parents gifted one another on their first anniversary. Meir even brought along the stuffed panda bear she has had since age six, when she drew a picture of herself standing on the moon when her teacher asked her what she wanted to be when she grew up.

Many Israelis and Jews were moved by a post Meir uploaded on February 1 to mark 17th anniversary of the Space Shuttle Columbia disaster. It contained photos of the front and back of a commemorative coin honoring Israeli astronaut Ilan Ramon, who died when the Shuttle disintegrated upon reentry to the Earth’s atmosphere.

Meir flew with a print of a painting by Ramon’s wife, the late Rona Ramon, as well as a replica of a postcard from Yad Vashem‘s collection.

“I really love that piece. I think they did such a good job of selecting this one,” Meir said of the postcard. “A concentration camp victim sent it to his son. It was a sketch of them looking up at the stars. The parallels are really nice.” 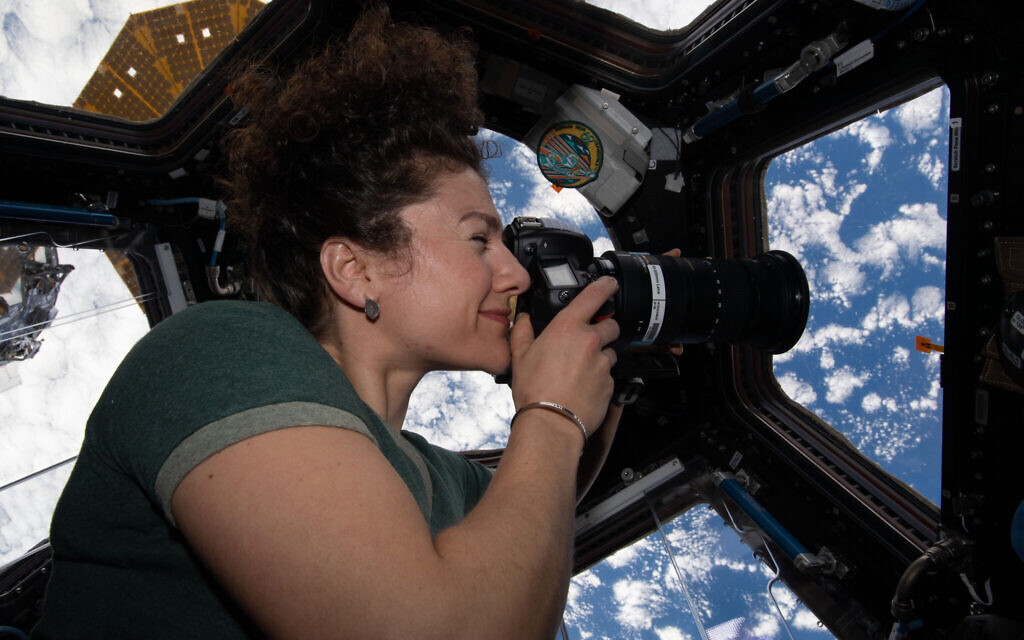 NASA astronaut Jessica Meir takes photos of Earth from a window of the ISS. (NASA)

In late October, Meir will start a new job at the Johnson Space Center. She will also begin waiting for her next space flight assignment, which she hopes will be with the Artemis project to send the first woman and the next man back to the moon.

“I’d love to go to the moon, but I’m not the one who gets to decide that. So we’ll see what happens. Chances are I could get to be involved in that mission in some way. That would be the goal,” she said.

I’d love to go to the moon

With 3,280 orbits of Earth and a trip of 86.9 million miles under her belt, Meir is itching to get back into space. Since her return in April, she has thought more about traveling again beyond our world than about reintegrating into life on our planet.

“I would have gone back the day after I came back. I’ll go tomorrow. Once you have experienced that feeling, you want more of it. For most people who have traveled in space, you’re just thinking about how to get back there,” Meir said.

Give a Hanukkah gift that connects

At this time when so many feel isolated, here’s a Hanukkah gift that connects you and those you care about to Israel, the Jewish people and to one another.

It’s not so easy to visit Israel - or, in many cases, each other - this year. So our connections through shared values, ideas and discussion are now more important than ever.

A Times of Israel Community gift membership entitles your recipient to one full year of membership benefits, at a special, discounted price.