BOSTON — Billed as “your opportunity to see the play that Israel won’t produce,” the latest production of Boston’s Israeli Stage has some of the theater group’s regular audience members pushing back.

Set for its world premiere on May 18, “The Last Act” hinges on the star-crossed relationship between a Jewish Israeli actress and her new-found partner in theater, a Palestinian actor. The actress’s husband is an Israeli intelligence agent who is told that his wife’s new friend is not what he appears to be. In fact, the husband is warned, the Palestinian “actor” is really a Hamas operative who plans to kidnap his wife in exchange for the release of Palestinian prisoners.

Written by Joshua Sobol in 2016, “The Last Act” is the latest addition to the 78-year-old Sobol’s long line of feather-ruffling productions. From the hotly disputed role of Israel’s rabbinate, to award-winning plays about the Holocaust that have been performed in 24 countries, Sobol’s works shine a light on Israeli society’s deepest tensions and traumas. Since the 1970s, some of his plays have addressed Israel’s control of territories captured during the Six Day War, including the Palestinians’ struggle for independence.

“Because Sobol’s play [‘The Last Act’] grapples with the Israeli-Palestinian conflict, it couldn’t find a home in Israel,” wrote Guy Ben-Aharon, the founder and artistic director of Israeli Stage.

“You see,” wrote Ben-Aharon in a message to Israeli Stage’s followers, “Israeli theaters are state-subsidized and wouldn’t produce [‘The Last Act’] for fear of losing funding over something so politically potent,” wrote the Israeli-born producer.

In an interview with The Times of Israel, Ben-Aharon said he has faced an unprecedented amount of negative feedback since choosing to stage “The Last Act.” Some of the criticism, he said, is from long-time audience members of Israeli Stage, which has produced more than 30 staged readings and productions of Israeli plays since 2010. 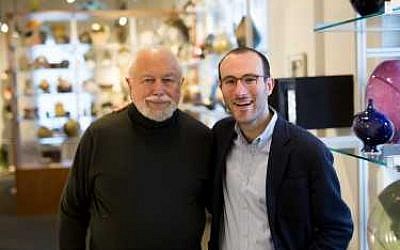 Dubbed “a fiery, sexy drama set in the Palestinian-Israeli conflict,” Ben-Aharon’s production of “The Last Act” will be his first to feature a non-American actor: Louis Abd El Massih, a Palestinian citizen of Israel from Nazareth, will play the Palestinian actor dedicated to dangerous theater.

“Some folks feel alienated by plays such as this one, due to the strong political point of view,” said Ben-Aharon.

There are claims that theater in the Jewish state is “under assault” from the government, which provides significant funding to most theaters. In recent years, the Ministry of Culture has sought to “defund” plays deemed overly critical of the Jewish state. In the process, said Ben-Aharon, many theaters have become risk-averse.

“If you say the Arabic word ‘Nakba’ [catastrophe] on stage, the possibility of getting defunded comes up,” said Ben-Aharon. “The climate has changed in the past few years. It is reminiscent of what took place with Shostakovich or Bulgakov [in Russia]. Artists were told by politicians what they should or shouldn’t create. This isn’t a comparison; there’s still freedom of expression in Israel, but the climate is moving towards limiting those freedoms.”

In Ben-Aaron’s assessment, some people need to work on “conflict resilience” when it comes to these issues. “I’m trying to spark the imagination and not run away from the new reality. Otherwise, we are all living in bubbles,” said the producer. 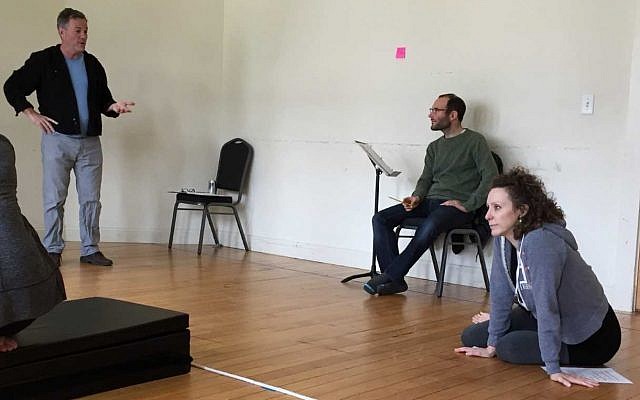 Rehearsal for the Boston world premiere of ‘The Last Act,’ a play by Joshua Sobol produced by Israeli Stage, April 2018 (courtesy)

As for allegations that Israeli Stage is excessively critical of Israel, the 28-year-old Ben-Aharon referred to the “‘dirty laundry’ phenomena. In this instance, said the producer, some Jewish leaders are attempting to keep “negative” aspects of Israel out of the spotlight, not to mention off the nonprofit stage.

According to Ben-Aharon, “Certain members of the American Jewish community say, ‘The community isn’t ready to have an honest dialogue about Israel.’ If not now, then when?”

In response to criticism of his choice to produce “The Last Act,” Ben-Aharon points to his mentor Sobol’s background.

“I’ve written to those deeming the play as ‘anti-Israel’ that Sobol is entirely Israeli,” said Ben-Aharon. “After all, he lives there, works there, pays taxes there, and raised his children and grandchildren there. [Sobol] writing this play is out of his deep love, care, and concern for Israel,” said Ben-Aharon, who has been collaborating with Sobol since 2012.

Written “out of despair and rage” by Joshua Sobol, “The Last Act” was the auteur’s first play not to be picked up by a major Israeli theater.

In a promotional interview conducted with Israeli Stage’s Guy Ben-Aharon, Sobol spoke about how the events of 2016 prompted him to write “The Last Act.” During the so-called “intifada of the individual,” said Sobol, “the Israeli automatic reaction was immediately to react with violence against violence. Whenever there was an attempt [by a terrorist] at stabbing or [running over people] with a car, people draw their pistols and shoot to kill,” he said.

Pointing out that several innocent lives were taken during Israelis’ attempts at self-defense, Sobol said that “everyone became professional terrorists” during those months. In “The Last Act,” these tensions inform the creativity unleashed by the play’s protagonists — the Palestinian actor and the Jewish actress, a pair set on staging their own version of the famous play “Miss Julie.” 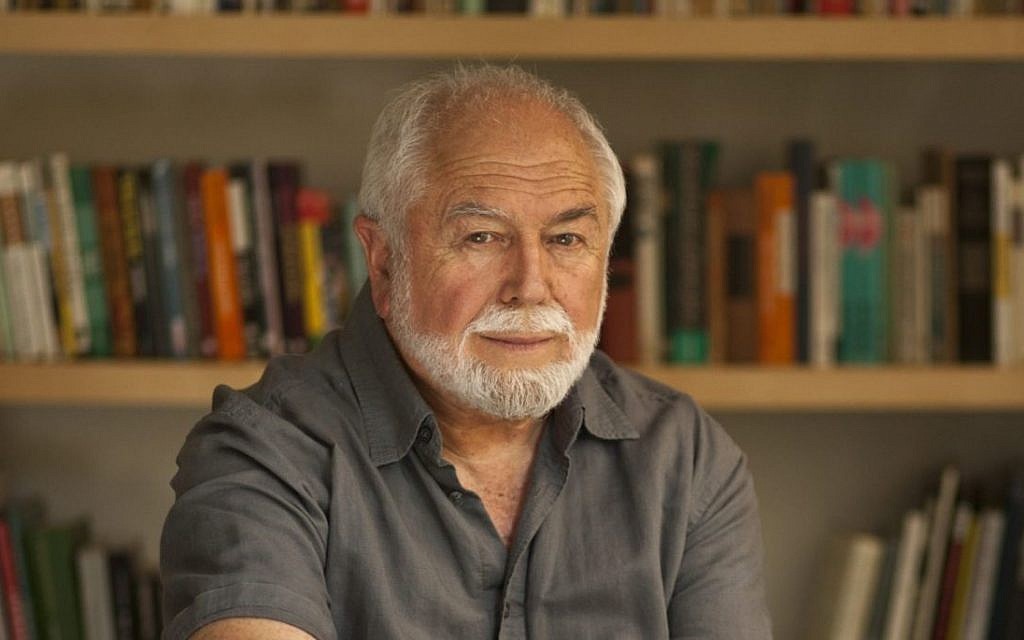 In the end, however, “the [Israeli] husband became the killer of his wife’s dream,” said Sobol in his interview with Ben-Aharon.

“It is terribly dangerous to get into that mood where you become kind of terrorists by reacting to terrorism in the same way, so to speak,” said the playwright.

Throughout his career, Sobol has pushed the boundaries of theater in the Jewish state. His 1987 “The Jerusalem Syndrome” compared the Roman Empire’s persecution of Jews with Israel’s control of Palestinians in the West Bank and Gaza. Following condemnation of that production, Sobol was ousted as artistic director of the Haifa Municipal Theater.

Fourteen years later, during the Second Intifada of suicide bombings, Sobol’s play “iWitness?” probed what it means to be a conscientious objector. Beginning in 2001, Palestinian suicide bombers carried out dozens of attacks against Israelis, killing more than 1,000 people. As Israel ramped up anti-terror efforts, some air force pilots protested this response by refusing to carry out missions in the West Bank and Gaza. 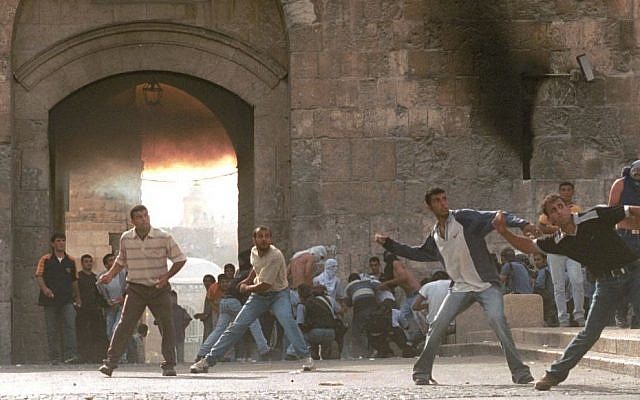 Arab residents of Jerusalem throw rocks at Israeli police near the Lions Gate in Jerusalem’s Old City on October 6, 2000, at the outset of the second Palestinian intifada, or uprising (Nati Shohat/Flash90)

Instead of directly portraying Israelis, “iWitness?” was about a famous conscientious objector from World War II. For disobeying Nazi conscription orders in Austria, the heroic dissident was convicted by a military tribunal and beheaded. The concept of “civil disobedience” informs the parable, including the limits a society places on punishment.

Sobol’s best-known play is 1984’s “Ghetto,” the first in his trilogy about the Vilna Ghetto in Nazi-occupied Lithuania. Not as controversial as some of his Israel-related works, “Ghetto” uses the stage as a metaphor: within the besieged ghetto, a theater troupe did, in fact, give condemned Jews a small ray of hope. As with Sobol’s upcoming “The Last Act,” theater is the means to an end.

“[The future of theater] depends a lot on the cooperation between Israelis and Palestinians,” said Sobol in his interview with Israeli Stage. “[The relationship] is so loaded with feelings of guilt, fear, revenge, resentment, all these emotions that I would say are good stuff for processing them into plays, into stories, into whatever,” said the playwright. 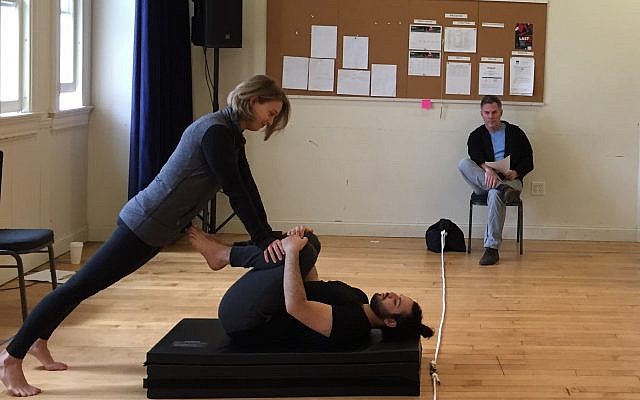 Rehearsal for the Boston world premiere of ‘The Last Act,’ a play by Joshua Sobol produced by Israeli Stage, April 2018 (courtesy)
read more: