When Ukrainian rescue workers discovered the blasted-out hole surrounded by masses of rubble at the spot where Roman Bashenko was last seen standing, they abandoned all hope of finding him alive.

“They thought I had been… blown to pieces,” Bashenko told The Times of Israel quietly, trying to choose his words carefully as he glanced at his wife sitting on the terrace of Tel Aviv’s Ichilov hospital.

Ordinarily a policeman from Dnipro who had previously served in Donbas in 2014, Bashenko was drafted to serve in the war following Russia’s invasion earlier this year.

In the early hours of July 27, a Russian guided missile tore through the building in the city of Bakhmut, Donbas region, where he was stationed. The city has been the target of relentless Russian attacks over the past six months, and, with almost constant gunfire, missile strikes, air raids as well as trench warfare, most of its 70,000 residents have fled. In recent days Ukrainian President Volodymyr Zelensky described the situation in Bakhmut as “the hottest, most painful.” “Everyone there deserves the highest gratitude!” Zelensky added.

Bashenko had arrived there just seven days earlier to defend the city.

“I was on the first floor, and the missile blast threw me 6 meters down into the basement,” recalls Bashenko, adding that the last thing he remembers is being in the room and everything going dark. 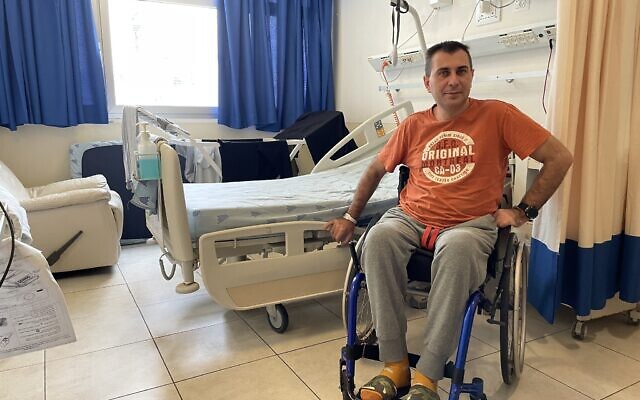 It was his wife Katya Bashenko, 250 kilometers (155 miles) away back home in Dnipro, who saved his life.

“My wife usually calls me in the morning – and she kept calling and calling,” said Roman, explaining that his phone had landed somewhere nearby him.

“I regained consciousness but couldn’t move. Everything around me was dark and I was covered by rubble. But then I heard my telephone vibrating so I started digging around for it with my fingers.”

“I don’t know by what miracle I managed to get through to him, the communication lines are so bad,” says Katya, who, when The Times of Israel visited, had been sleeping on a thin mattress on the floor of Ichilov hospital for two weeks.

“I started asking him what he sees around him and immediately called the rescuers.”

By then, the first responders had already inscribed Bashenko’s name on the list of those killed in the attack.

It took 13 hours from the moment of the blast to locate Bashenko and dig him out. He emerged with a serious spinal injury and is currently paralyzed from the waist down.

Seven other members of his team of 21 were injured and five were killed in the blast. 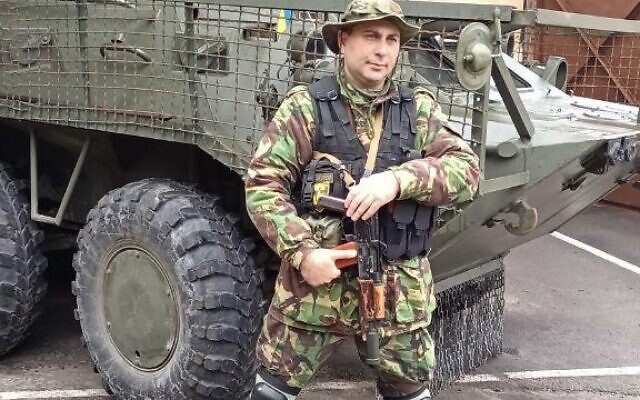 Roman Bashenko on active duty as part of the Ukrainian Army in the Donbas region. (courtesy of Roman Bashenko)

“The youngest was 22 years old. The oldest was 46 – he was almost due to retire already but he was so dedicated, he wanted to help defend our country,” said Bashenko.

The doctors in Ukraine said the only hope of restoring Bashenko’s ability to walk would be to get treatment abroad.

Since then, the journey from the frontline city of Bakhmut to Israel has cost the pair $100,000 so far, entirely financed by his salary as a policeman and his wife’s as a hairdresser and their life savings, as well as generous help from friends, family and well-wishers. “People would just come to us and brought us cash – ‘Here, this is as much as we can offer, we want to help,’” Katya says.

“No government helped us,” notes Bashenko, adding that many Ukrainians who come to Israel for medical treatment pay for it themselves.

Despite the expense, Israel was the best available option for treatment, the couple says.

After doing research, they identified Israel, Switzerland and the US as the best places in the world for the neurosurgery needed. “A clinic in Switzerland offered treatment for the fees of 110,000 euros a month, and the visa process to get into the US would have taken too long,” he explains.

“Active treatment and rehabilitation following such an injury is possibly up to six months — after then, stagnation begins. So we needed to act quickly.”

Bashenko is one of dozens of Ukrainians coming to Israel for medical treatment through private arrangements.

According to Israel’s Foreign Ministry, the government has so far brought over nine Ukrainian children for cancer treatment (full disclosure: this writer’s partner works on this program), as well as six injured Ukrainians who have received medical treatment and prosthetic limbs, with others on the way. Israel was the first and only country to set up a temporary field hospital in western Ukraine, where 6,200 people were treated before it shut at the end of April 2022.

“We are happy with Israeli humanitarian aid, but our leadership is seeking more military technical cooperation for means of defense that will allow us to save people’s lives,” Ukraine’s Ambassador to Israel Yevgen Korniychuk said in a telephone interview with the Times of Israel.

While he was not familiar with Bashenko’s case, he said he has visited other Ukrainian fighters, including some fitted with prosthetic limbs paid for by Israel. The ambassador added that the war-wounded require not just physical treatment but also crucial psychological help to help them deal with the trauma of war and ensuing posttraumatic stress disorder (PTSD).

Currently, the doctors are saying that they are unlikely to be able to help Bashenko walk again – a bleaker prognosis than the optimism he heard from specialists in Ukraine.

“So now, we are looking for other opinions from other specialists about the possibility of restoring my ability to walk,” he says. This, too, presents new challenges: “Each consultation with a specialist doctor costs around NIS 2,000,” Bashenko adds.

As for the future, “whether I can walk again or not” depends on what happens here in Israel, says Bashenko. “We are not giving up yet,” he adds.