When Ohad Navon, 26, set out for the Amazon rainforest in Bolivia last month, the novel coronavirus was about the last thing on his mind.

Sure, the Israeli backpacker and travel blogger was aware the virus had brought air travel around much of the world to a screeching halt, that it was ravaging northern Italy after gutting Wuhan and turning the Diamond Princess cruise into a closely watched horror show. He knew that it was gradually sending Israel into lockdown as its first cases emerged. But he was in sunny South America — and the jungle beckoned.

“No one mentioned the word ‘corona[virus]’ at all [in Bolivia]. We felt a lot safer in South America than in Israel because there simply weren’t any sick people,” he said.

In his three years of traveling, Navon, a former IDF officer who goes by the moniker “Ohad the Nomad” in his blog, has visited Australia, New Zealand and Papua New Guinea; he hitchhiked and camped across Japan and pitched a tent in Tokyo; he shaved his head in a Tibetan monastery during a five-day stint of silence; he spent six months in Africa, including in Congo and Uganda; in Morocco, he was briefly arrested for photographing his father’s childhood home; hitchhiking across Alaska and Canada, he didn’t sleep in a bed for three months, and bonded with an 80-year-old retiree living in an RV; he jumped a cruise to Antarctica, camped across violently windswept Patagonia, saw Brazil and Easter Island, and biked across Paraguay until he was felled by a bout of dengue fever.

What brought him to South America, he said, was both the lure of Antarctica, accessible by ship from its southernmost tip, and his desire to do a survival tour of the Amazon rainforest.

Together with two recently discharged IDF soldiers he had met at his Bolivian hostel that day, they hired a local guide, Jose — “Tarzan” to his friends — and set out on March 11 with nothing more than a machete, mosquito net, satellite phone, and photography equipment. 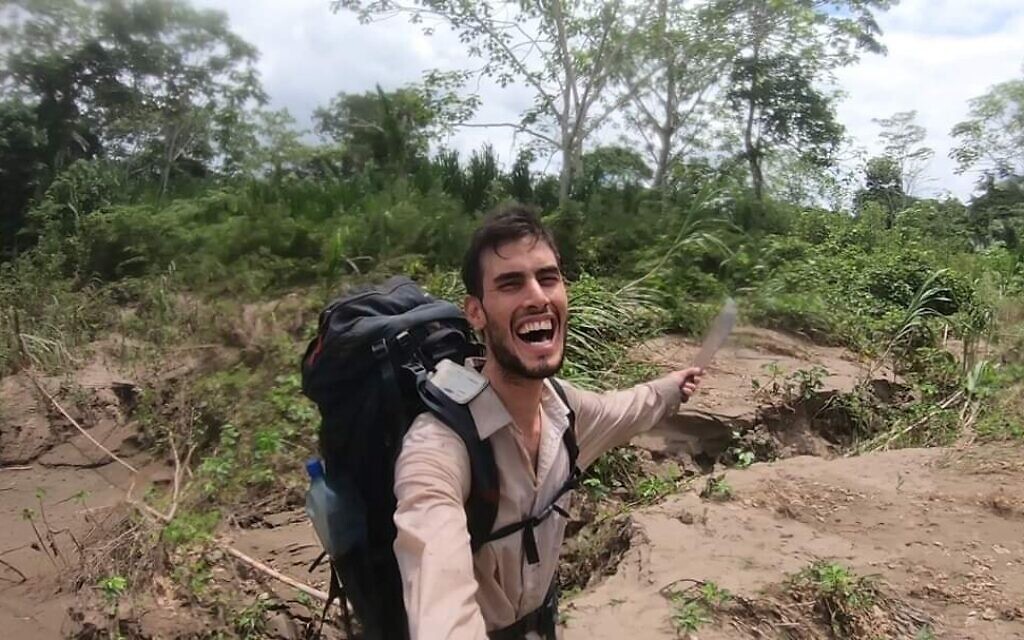 “We convinced him [the guide] to enter an area where he hadn’t been for 15 years and navigate in the forest by the sun. It’s a rainforest, and the moment there’s a cloud, you can’t navigate,” said Navon.

The plan, he said, was to hike for seven days in a remote area until they arrived at a river, where they would build a raft and sail for another three to four days back to the city.

“We came for an adventure. We were prepared for it to be a journey of our lifetimes,” he said.

But after six days, Navon began to suspect they were lost.

Lost in the Amazon

“You know how intuitively, you feel that the guide is saying, ‘Yes, yes, it’s all good’ but [it isn’t]. I felt intuitively that we were lost. And we really didn’t see signs of a large river,” he said.

Eventually, Navon decided to turn on the GPS on his satellite phone to check the route.

“I saw that for the past six days, we simply went in the wrong direction,” he said, adding that they were a week’s hike from their destination river. 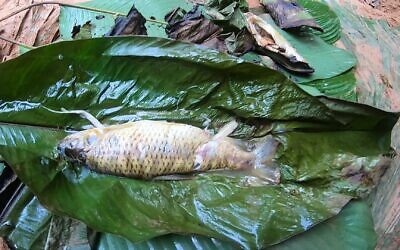 Dinner in the Amazon rainforest (Courtesy)

In the first two days, the four had shared one-and-a-half pieces of fish among them and some fruit plucked from the jungle, most of it rotten. They hadn’t eaten anything for the past four days. They’d run out of water 24 hours earlier. The humidity was unbearable. And they were drained by the constant machete-hacking for seven or eight hours a day as they hiked.

And then, “We got stuck in a huge swamp. It didn’t matter in what direction we went, there was a swamp. You go for two hours north — bam, swamp. East, south, two hours in each direction  — bam, swamp. We were exhausted, our bags [heavy] on our backs.”

And with the hunger and thirst, he said, their grip on reality began to slip.

“After four days of that [no food], we all just started hallucinating. We imagined we were home, I would describe it as feeling that I was really in my home, hugging my mother and crying. We were in an extreme state, physically and emotionally.” 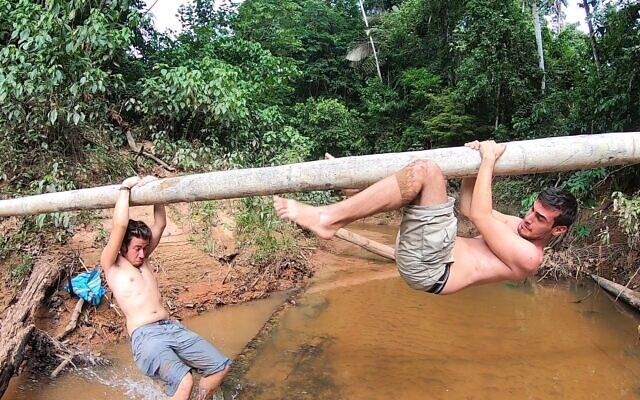 After spending some 10 hours unsuccessfully trying to get out of the swamplands, Navon turned on his satellite phone and sent out an SOS.

But there didn’t appear to be a signal.

Hungry, sweating, dehydrated, dazed, and fearful, they went to sleep.

Out of the forest

In the morning they managed to contact the rescue team from the guide’s agency. But just as they did, “Tarzan the guide found an exit route,” Navon said.

“We went out of the swamp. We found some water, some food, some hearts of palm and grasses. We picked mushrooms. It wasn’t filling, but we reached a point in which we weren’t in danger. And then we continued walking until the ninth day.”

Navon canceled the SOS. But he decided to keep his satellite phone on and told the Bolivian rescue teams to keep tabs on them — just in case.

On day nine, March 19, they reached a river — a different river from the one they had planned to come to, but it, too, would lead them back to the city.

As they gathered supplies to build a raft, they were jarred by screams emerging from the jungle. Their guide went to investigate, telling them it could be hunters or members of local tribes.

“Suddenly we see four guides, a rescue team, from the same company we hired Tarzan,” said Navon. “They told us, in shock, ‘Listen, the coronavirus has spread in Bolivia. Fifty people are dead. And your parents sent us to rescue you, because tomorrow night, Bolivia is closing its gates and there won’t be flights for another month at least. You need to get out and make the last flight out of Bolivia.’”

The Israelis thought they were being pranked. In actuality, the confirmed death toll from the virus was much lower — as of April 6 it stands at 11 people — but the lockdown and the border closings were no joke.

“Nine days earlier, when we were in the city, in civilization, no one uttered the word coronavirus,” explained Navon.

“From the measly Spanish we spoke, we responded, ‘No, no, you’re kidding, we need to build a raft,'” said Navon. They continued sparring until it became apparent the guides were not kidding.

For the next five hours, they hiked furiously through the Amazon. A subsequent four-hour boat ride led them back to their hostel. It was on lockdown.

The three starving Israeli tourists managed to get to a nearby pizzeria, the only restaurant open, and then they planned their exit route — two domestic flights to the Bolivian city of Santa Cruz, from there a flight to Panama, from Panama to New York, and New York to Tel Aviv. First thing in the morning, with the clock ticking on the closure of the skies for international travel, they hopped on a plane.

The last flight out of Bolivia?

In Santa Cruz, the three Israelis had a 10-hour wait before their connection to Panama, so they plopped themselves down at an airport restaurant to scarf down a much anticipated meal.

“Three hours before the flight we got to the check-in and didn’t see anyone. We made some noise and they told us, ‘What are you talking about? The flight was moved up. The flight left half an hour ago. You missed it. This was the last flight leaving Bolivia for the next month or two months.’”

No one had told them. 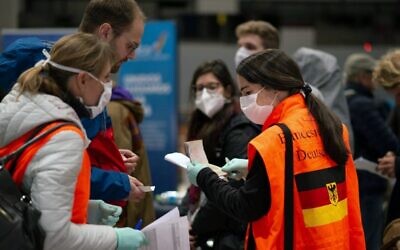 Illustrative: Some 150 European Union citizens, mostly Germans, wait to board a plane bound to Frankfurt at El Alto international airport in Bolivia on March 27, 2020, amid the COVID-19 outbreak. (Radoslaw CZAJKOWSKI / AFP)

“There were no more flights… Bolivia closed its gates,” said Navon, adding that they thought of taking a taxi to the Brazilian border. But the land borders were also closed.

They slept in the airport, then found an Airbnb and contacted the Israeli embassy in Brazil (there is no mission in Bolivia).

At the time, Israel had begun airlifting hundreds of Israeli backpackers stranded by the pandemic back home, including from Peru. According to the Foreign Ministry, over 1,800 Israeli travelers seeking to come back to the country remain abroad as of Monday, most of them in Australia, Thailand, New Zealand and Argentina. 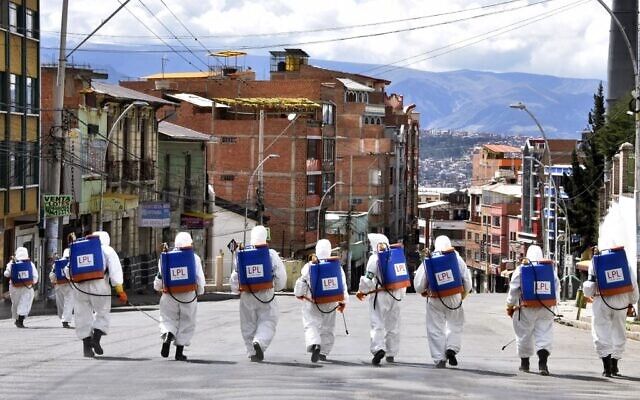 Municipal workers disinfect the streets of La Paz, Bolivia on April 4, 2020 as a preventive measure to slow the spread of the novel coronavirus, COVID-19. (Photo by Aizar RALDES / AFP)

His friends, Navon said, were confident they would find a way home.

But he was “of little faith.”

All the way home

Days later, however, with the intervention of the Israeli government, the three were airlifted on a Bolivian military cargo plane to Brazil on March 26, along with the 20-25 other Israelis left in the country, he said.

From there, they flew to Tel Aviv via London in a flight arranged by the Foreign Ministry, which was also host to Australian and Singaporean tourists heading home.

In the past three years, Navon said he visited Israel just a handful of times, including to attend most of a semester at the Technion college before quitting to travel again.

Though the sponsorships that enable him to travel have dried up as the tourism industry suffers a global hit, he is adamant he’ll be traveling again when the virus dies down.

But for now, having planned to visit Israel only in September, the homecoming was a welcome, if unexpected, respite.

“It’s not easy to admit, but it broke me a little bit,” he said of his Amazon experience. 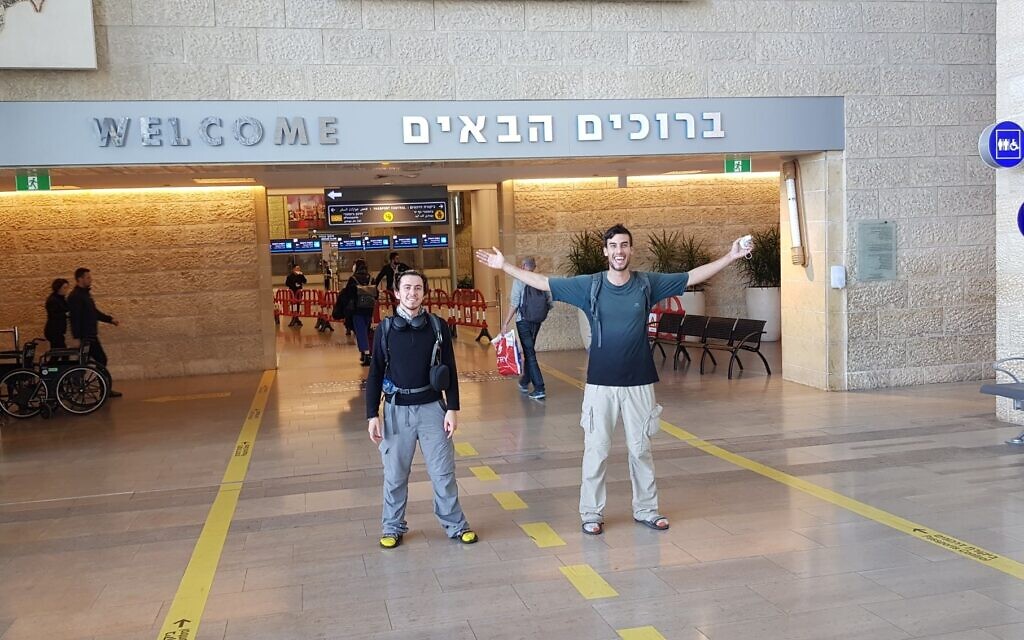 “Coronavirus led me home,” he added, speaking from his home quarantine in Ness Tziona last week.

(And he feels fine.)