During an early April phone interview, Yuval Noah Harari said he was spending his days at home, with his husband. For other internationally bestselling writers and speakers (and the rest of us, too) that might imply a dip in productivity brought about by the coronavirus outbreak. In Harari’s case, however, his home, located on a small town between Jerusalem and Tel Aviv, is his office — and his husband is his manager.

Work goes on, perhaps better than ever, as the lack of interruption helps Harari follow his eternal mantra: “Focus.”

The author’s books, among them “Sapiens: A Brief History of Humankind,” and “Homo Deus: A Brief History of Tomorrow,” have sold millions of copies all over the world. He is admired by readers of various educational backgrounds who love his way of combining seemingly unrelated disciplines such as history, botanics, microeconomics and artificial intelligence to draw a big picture of humankind. And he does so in short, plain sentences that are easy to digest.

The 44-year-old historian and professor at Jerusalem’s Hebrew University usually doesn’t care for petty politics, preferring to focus on what he calls “the big picture.” Harari meets heads of state and has had tea with former US president Barack Obama and German Chancellor Angela Merkel, but asked about political strategies, he usually demurs. “I am not a political scientist,” he says. 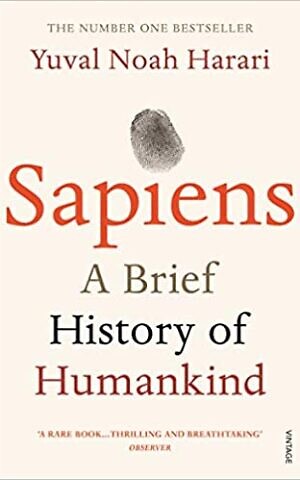 It seems that in the wake of the coronavirus crisis, though, Harari has decided to take another tack. When the United States cut funding to the World Health Organization on April 15, he announced that — along with his husband Itzik Yahav and Sapienship, their
social impact company — he has donated $1 million to the international group.

When an ally of Prime Minister Benjamin Netanyahu suspended parliamentary activity on March 19 ostensibly due to the health crisis — thus freezing the political process following the country’s March 2 elections — Harari’s tweet that Netanyahu was turning Israel into a “dictatorship” stirred an outcry from the prime minister’s supporters. Likewise, the follow-up op-ed in the Yedioth Ahronoth daily titled: “This is an attempted coup.”

In our April 2 conversation, a version of which first appeared in the German weekly DIE ZEIT, The Times of Israel asked the author if he still thinks this terminology was appropriate. Harari explains why he believes that in the days of COVID-19, even as everybody fears for their health and their jobs, it is more important than ever to pay attention to politics.

This interview has been edited.

The Times of Israel: You wrote that the coronavirus crisis forced countries to chose which path to take: nationalism or cooperation. Do you think we still have a choice?

Yuval Noah Harari: Yes, I think so, because this crisis is far from over. We have not seen the worst yet, certainly not in economic terms. At first there was this big shock, and countries didn’t know what to do. Now that we understand the crisis better, there should also be an understanding that the only way to deal with it effectively is through cooperation. Countries should cooperate at the level of healthcare. There should be common efforts in developing medicine and vaccines, in exchanging information, medical equipment and personnel in order to make sure that the countries that are hit hardest can get through this.

Some might argue that you cannot afford to help other countries if you know you are struggling yourself.

We have to remember that the focus of this epidemic is shifting. First it was in China, then in Italy, then it went up north. Keeping the virus from spreading within your country is not enough. As long as it keeps spreading in other countries, you’re in danger as well, because the virus can and will return to your country too — and probably in an even worse form. The biggest danger is mutation, so the second wave could be deadlier than the first. If you assist other countries, it’s not just out of compassion. It’s self-interest. As long as the epidemic spreads anywhere, it endangers everybody. 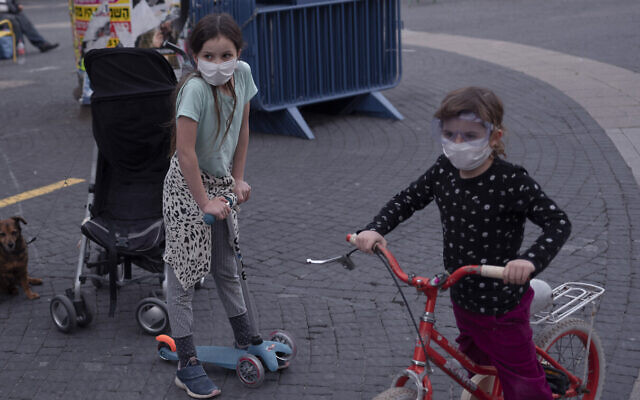 Would you go as far as saying that lives could have been saved if countries hadn’t each looked for their own solutions?

I think so, yes. A more coordinated reaction could have saved lives before. But the most important thing is to act from now onward. We’re still not at the bottom of this. We need to learn lessons from the previous experience as we go on. And I think the most important lesson is cooperation.

Which ways to cooperate do you suggest for the European Union?

If there is an effort to produce more equipment, then this effort should be coordinated. Otherwise you have a factory in France and one in Germany, competing for the same raw materials, driving up the price, causing redundancies in production. If they compete for equipment coming from outside, it makes much more sense for the whole European union to buy the materials together instead of 27 EU countries competing. Also, a lot of what can be done is sharing information. Lessons learned in Italy could save lives in Germany two weeks later. 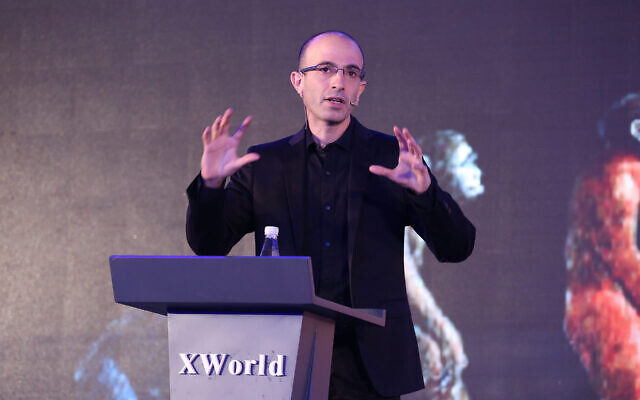 Israeli historian and writer Yuval Noah Harari gives a lecture on artificial intelligence during the X World Future Evolution on July 6, 2017 in Beijing, China. (VCG/VCG via Getty Images via JTA)

Nationalism was on the forefront long before the epidemic. Taking an optimistic stance, do you believe the coronavirus crisis could even make us to lower our border fences?

It could go either way. People could say: Look, this whole thing happened because of globalization, so we’d better close our borders and everybody takes care of himself. Or it could go in the opposite direction, of understanding that this is a global threat to everybody. For the virus, there is no such thing as Italians or Hungarians or Germans. For the virus we are all the same, we are all prey. To protect the health of Germans in the long run you will need good healthcare in Italy.

In March you claimed that Netanyahu was turning Israel into a “dictatorship.” Do you still believe this is the case?

What we saw was really an attempted coup. We had an unelected prime minister, Benjamin Netanyahu, who tried to close down parliament and rule by emergency decrees without any parliamentary supervision. There were a few days when it seemed he would succeed. Now when we say ‘coup’, we usually think of tanks in the streets, soldiers taking over TV stations, but very often coups try to hide their real nature. Netanyahu said, “I will see what is going to happen. If the public accepts it, we’ll keep the parliament shut.”

In the end, this didn’t happen.

No, luckily it didn’t happen. There was enough resistance from other parties, from the media, there were demonstrations. He realized he had to make a deal with his rivals. 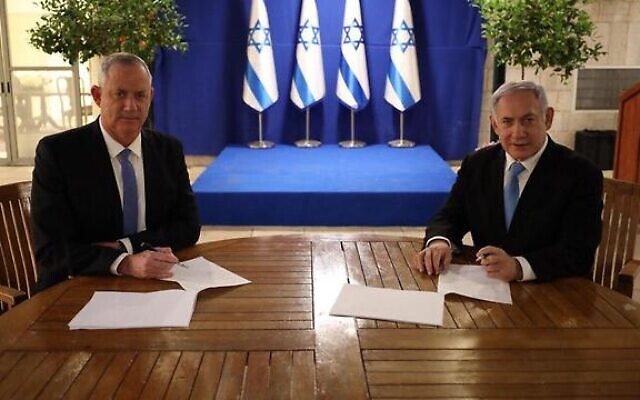 Do you believe that this brief standstill of parliament caused any lasting damage?

It has caused severe damage, because it takes a lot of small steps leading in an authoritarian direction. He might try to do it again and he might succeed. In an economic crisis like this, people are afraid for their lives, for their future. Many of them just wish for a strong leader who knows everything and will protect them. Others just don’t care about politics, they think politics don’t matter now. That is extremely dangerous.

The decisions taken in the next month or two will shape the world for decades to come. Governments are now distributing hundreds of billions of euros. We always have choices here — which businesses to rescue is a political choice. People need, and I know it’s difficult in these days, to focus also on politics. They should realize that it is an extremely important moment. In a year or two you’ll be like a guest coming to a party when the party is over, and all that is left to do is wash the dishes. 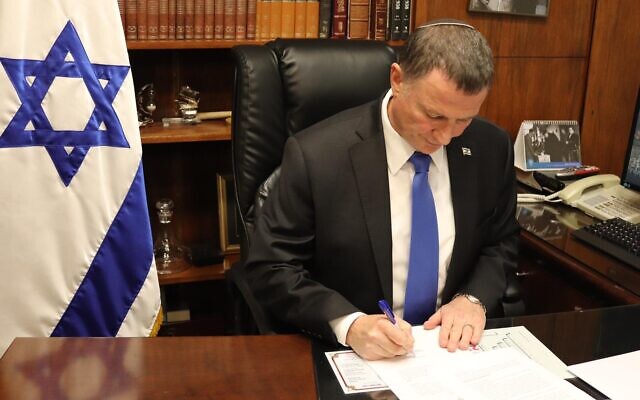 Knesset Speaker Yuli Edelstein signing an official response to the High Court about a petition asking to order him to hold a vote in the Knesset plenum to replace him, March 23, 2020. (Courtesy)

There is a common understanding that in times of crisis, voters long for strong leaders. But what does “strong” actually mean? Does it necessarily imply they are populist or even far right politicians?

In recent years we have seen the rise of populist politicians in many countries. What characterizes populists is that they deliberately undermine social harmony. They depict only their own voters as real people, and their political rivals as traitors of the real people.

They usually succeed in gaining the support of half of the population, but they completely alienate the other half. In normal times this is problematic, but you can still govern a country. In a crisis like this, it doesn’t work. You need the support of everybody. If you go on TV and give guidance about social isolation, you can’t just have half of the public believing you, you need all of them.

Are you implying that Israelis who are against Netanyahu are less compliant with COVID-9 regulations than his supporters?

It works in both ways. Some might be not as compliant. Most of all, Netanyahu doesn’t feel he really has to take care of their interests. To give an example: In recent years, [Netanyahu’s] government has attempted to change the cultural landscape of Israel, to shut down theaters, galleries that support different political views. They did not really succeed, but in these times of emergency, they probably will. All the cultural institutions are shut down, just like other businesses. Now the government’s task is to save businesses, to give loans and grants. There is a chance that they will give them only to those theaters and galleries which they think are loyal. That would reshape the cultural landscape completely. 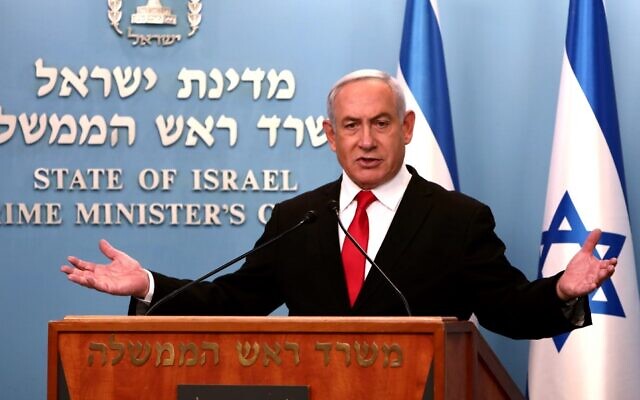 Talking about the economic landscape, this is a tremendous shock in many aspects. Do you think it is a shock that will also fundamentally change the way our economies work?

Certainly, yes. You can think of it as a huge social experiment conducted on hundreds of millions of people. At my university we have been talking for years about doing some of the courses online, but we never really did it, it seemed too complicated. Now within one week the entire university shifted its courses to the internet. I give all my courses online. This experiment will have results.

At the end of the crisis we won’t go back to where we were. This will also change the academic job market. If you have courses online, it’s much easier to outsource university jobs to other countries. A university in Germany could decide to hire a professor in India for a tenth of the price of a German professor, and they could do the course online.

Several countries thought about applying surveillance measures to keep the virus from spreading. Israel is at their forefront. You are a firm opponent of these measures. Why do you believe surveillance will stick with us even after this crisis is over?

[Editor’s note: On April 22, Israel’s Knesset decided not to move forward with legislation to let police to track cell phones of quarantined individuals, instead allowing a temporary emergency measure to that effect expire.]

There is always a new threat on the horizon. Let’s say coronavirus cases go down to zero. Governments will argue that there might be a second wave of COVID-19 that awaits us next winter, so why not keep it? Every year the common influenza kills tens of thousands of people, why not protect them also?

Once people give up their privacy, they get used to it. And for governments it doesn’t seem so urgent any more to take surveillance back.