NEW YORK — “I don’t think I could watch ‘Schindler’s List’ again,” my mother says, when I tell her that I attended a press screening for the 25th anniversary re-release.

It’s an understandable position, one that Steven Spielberg himself mentions in a short, filmed introduction at the beginning of the new 4K digital print. “Hearing these stories are difficult,” he warns, “but it is important to see the worst and the best in people.” He adds a reference to the “newfound urgency” in world affairs, exuding warmth while discussing such depressing matters. Just before he concludes, he slips in a reference to the Dolby-enhanced audio we are about to experience.

This is “Schindler’s List” in a nutshell for me. It so important to me, and for the Jewish experience, but it is also — and I wish there were a better word than this — entertaining.

I don’t need to sell you on Spielberg’s filmmaking abilities. Take another look at “Jaws” or “Close Encounters of the Third Kind” or “Jurassic Park,” which is a perfect piece of popcorn cinema that Spielberg, somehow, was able to edit while simultaneously shooting “Schindler’s List.” The whiplash between choosing the goofiest Wayne Knight reaction shot and orchestrating the reenactment of the Kraków Ghetto has got to be the most profoundly strange double-shift in moviemaking history.

But then again, life is messy. Take as example Oskar Schindler. Here was a mediocre businessman who could only succeed when he had access to slave labor. He exploited Poland’s Jews for war profiteering and his sexual appetites. Then, at some point along the way, he realized he needed to stop the abuse and somehow undo his actions. He liquidated his wealth to save the lives of his workers and became synonymous with the Righteous Gentile. And since 1993 he’s been the face of Holocaust cinema. 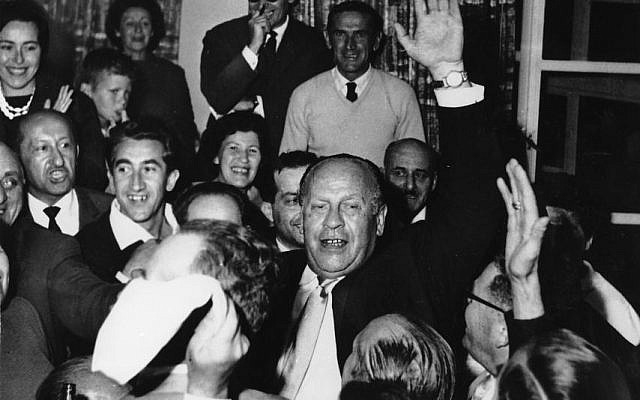 Oskar Schindler during one of more than one dozen visits he made to Israel, beginning in 1961. During the Holocaust, Schindler used his factory and bribes to help save Jews from deportation to Nazi-built death camps (public domain)

This was controversial in its day. How could the most important movie about the Holocaust be about someone who isn’t Jewish? And leave it to facile Spielberg, some said, to make a Holocaust movie with a (somewhat) happy ending! Critic J. Hoberman famously criticized the scene in the Auschwitz showers, where a trainload of Schindlerjuden were sent in error, requiring Schindler to swoop in like a goyim-ex-machina for a rescue. Is it not beyond the line of good taste to use the images of petrified Jews, quivering naked in the showers, hoping for water and not Zyklon-B?

Of course, that mix-up actually happened. Spielberg’s decision to include it is “difficult to watch,” and probably the most psychologically cruel moment in the whole film, but it is the lowest point in the movie, the deepest valley of death, later juxtaposed with the hilltop of life, the Schindler Jews “today” in Israel. 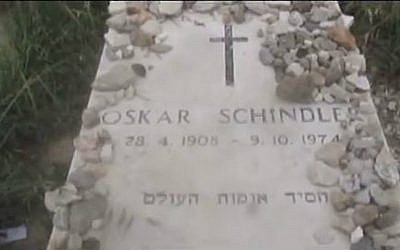 The grave of Oskar Schindler on Mount Zion in Jerusalem. (screen capture: YouTube)

That final walk is the sequence I remember best because, in 1993, I worked at a movie theater as an usher, and when that last scene hit I knew I had to gather my dustpan and sweep up the boxes of Raisinets for the next screening. There would be people dabbing their eyes as they exited, but like at any job you grow a little immune to it. Even with Israeli violinist Itzhak Perlman playing John Williams’s outstanding score, I’d hope they’d clear out a little faster so I could get back to slacking off my menial tasks. If I could go back now I would find those people, especially any with numbers on their arms, and be a little kinder.

Something else that I took for granted was just how boldly Zionist the film’s conclusion is. After Schindler and his wife flee, a lone rider approaches Itzhak Stern and the other Jewish workers.

“You have been liberated by the Soviet Army!”

“Have you been in Poland?”

“I just came from Poland.”

“Are there any Jews left?”

No response. Another question.

“Where should we go?”

“Don’t go east, that’s for sure. They hate you there. I wouldn’t go west either, if I were you.”

“We could use some food.”

“Isn’t there a town over there?”

The music comes up, “Yerushalayim Shel Zahav” (“Jerusalem of Gold”). Not very subtle. 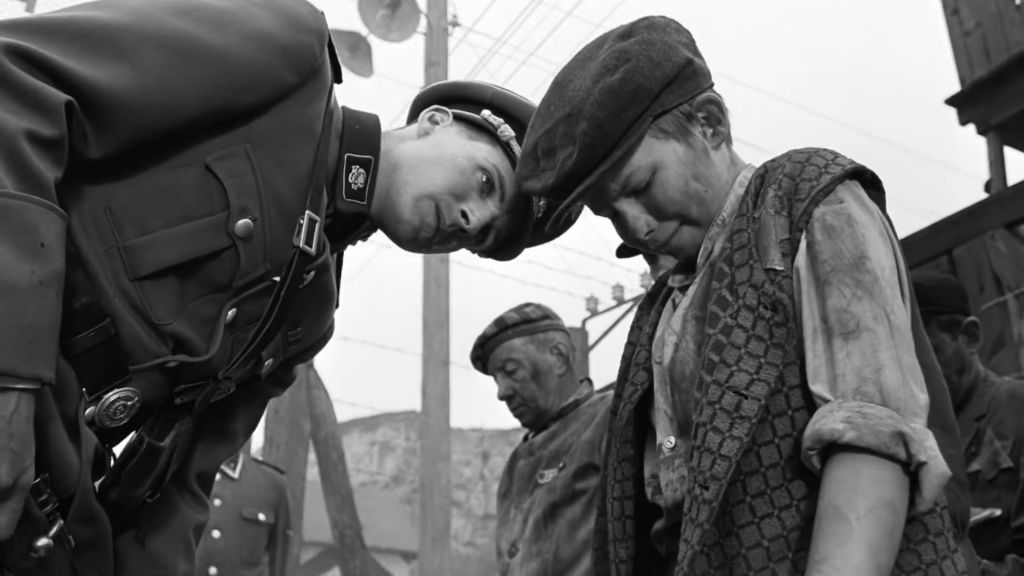 Nowadays, it’s practically a criminal act to suggest that Jews should make a homeland in Israel without first offering a list of prevarications. Here’s a record that it wasn’t always this way.

A recent survey showed that one out of five millennials in the United States had minimal understanding of the Holocaust. This is upsetting, but may not be so new. In 1993, at New York University of all places, two different non-Jewish classmates felt the need to “apologize” to me after seeing the film. Other Jewish students reported the same phenomenon. It made us feel awkward. None of us had anything to do with the Holocaust; it was all okay.

That’s the difference for me between seeing the movie then and now. The big conclusion in which Schindler, played by the strong and broad Liam Neeson, has the realization that he “could have got more out,” was, I confess, something I once lightly ribbed as being a little over the top. Naturally, it’s the part that kills me most today. 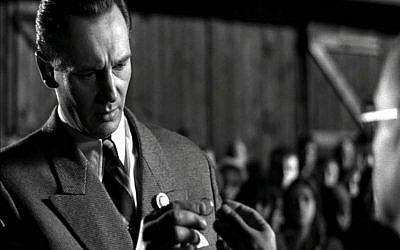 The enormous Neeson sobbing and collapsing in tiny, frail Ben Kingsley’s arms, overcome by guilt at having been part of the system for so long, for being too greedy, or too frightened to take a stand. This is a moment all of us who have lived a little bit must confront in ourselves. No, we are not living in the Third Reich, but even in our personal lives, and with our families, or even with ourselves, are we doing enough? Are we doing what’s right? No, probably not, at least not always.

So, like my mother says, and as Spielberg acknowledges, it’s hard to watch “Schindler’s List.” But it is outstanding.

It’s difficult to speak solely about the craft of something so emotionally fraught, but this is masterful filmmaking. It opens with a benediction, a candle prayer in color, the smoke cutting to the puff of a train then the rhythmic thrum of bureaucracy. Stamps, names, papers. Schindler arrives in Krakow and schemes his way to his position. He impresses the right Germans and enlists the right Jew. It’s like a heist picture, and the music is upbeat and propulsive. Even his repossession of a rich Jewish home (as the well-heeled owners are dismissed to the dirty ghetto) is cut together with a degree of playfulness. Like Schindler himself, we are removed from the horror, navigating the waves to come out on top. Until something, thankfully, changes. 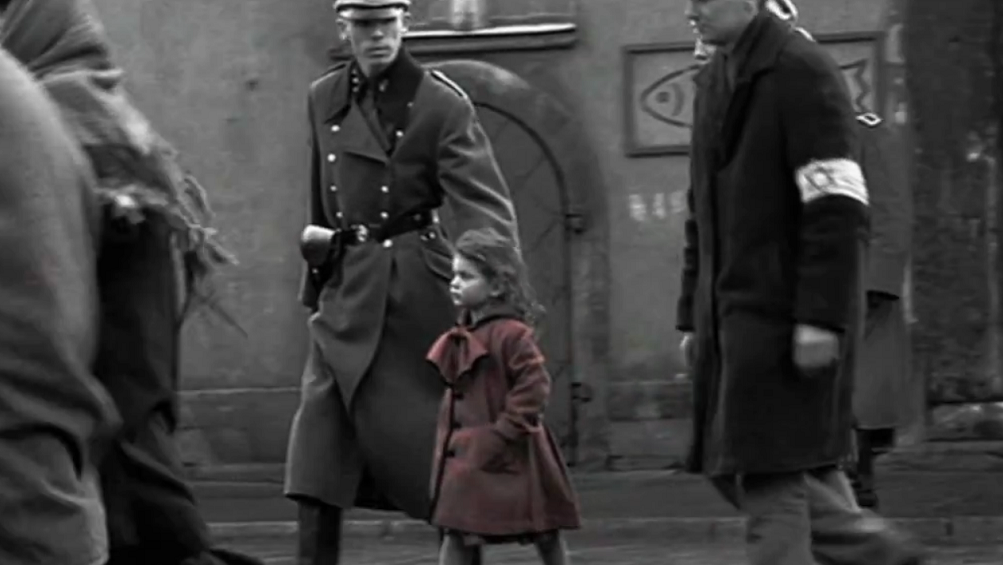 I’ve seen “Schindler’s List” a number of times and yes, perhaps due to its “happy ending,” I know I’ll watch it again. I can’t say the same for “Son of Saul,” a remarkable artistic triumph that exploits cinematic formalism in all the best ways, but is too unbearably bleak to revisit. There will likely never be another Holocaust movie as widely accepted as “Schindler’s List,” a critical and economic phenomenon, but luckily it is a triumph. See it again in a theater. And may we all live long enough to see it’s next revival in 25 years. 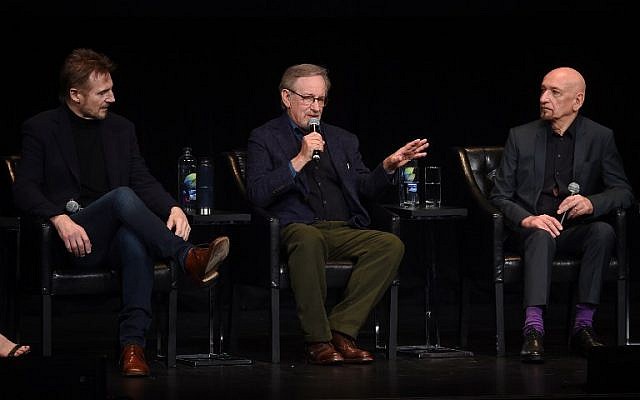