Arsenal had been part of my life long before Arsene Wenger arrived as manager in 1996. Not so, the lives of my children.

I grew up in northwest London, and Arsenal was an almost local big team. So were Spurs, but Arsenal, in their imposing red-and-white, came ahead of Spurs in the league table printed in the first kiddie football book I ever remember seeing. In fact, in what I realized later was an alphabetized listing, Arsenal came first of all. How could I not support them?

So the first professional game I went to with my dad was an Arsenal home match, against Derby. “We” didn’t play particularly well; “we” could only manage a draw. Railings collapsed in part of one of the stands. My mother had kittens. But I loved it. And Arsenal was always “we” from then on.

I knew I wasn’t going to be an Arsenal player. I knew I wasn’t going to be a professional footballer, or a professional sportsman, of any ilk (though the cricketing dreams took a little longer to die). But it was John Radford and Ray Kennedy and, especially, Charlie George — he of the FA Cup-winning, Double confirming, screamer against Liverpool in 1971, after which he lay like a spread-eagled messiah on the Wembley turf as his teammates came to shower him with their love — that I imagined myself being when I played football in the park behind my house with whoever turned out most weekday evenings, or in our back garden by myself, kicking the ball for hours against the garage wall. 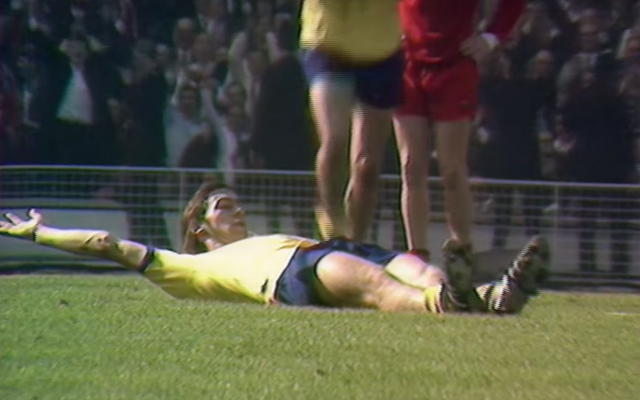 When I moved to Israel at age 20, I brought Arsenal with me, following the team as best as one could 35 years ago, on the BBC, buying the occasional British newspaper, before cable TV and the internet gradually made the geographical distance more surmountable.

And when my wife and I had our children, two boys and a girl, I bought Arsenal fleece onesies from the club’s mail order catalogue for each of them in turn to sleep snugly in, sometimes opting for the softer yellow and blue shades of the reserve kit because the colors went so well with their toddler blond and red curls.

Arsene Wenger wouldn’t have known it, of course, but when he was appointed manager in 1996, out of the blue (or should we say red-and-white) by the club’s vice chairman David Dein, he had a glorious impact on the Horovitz household, as on millions elsewhere. For he ushered in an era in which, we must admit it, the rather defensively minded club was reborn as a footballing symphony of speed and grace and joy. (A word of praise here for the articulate Frenchman’s evidently prophetic parents, who somehow knew to give him a first name as similar as possible to that of the club he would transform half a century later.) 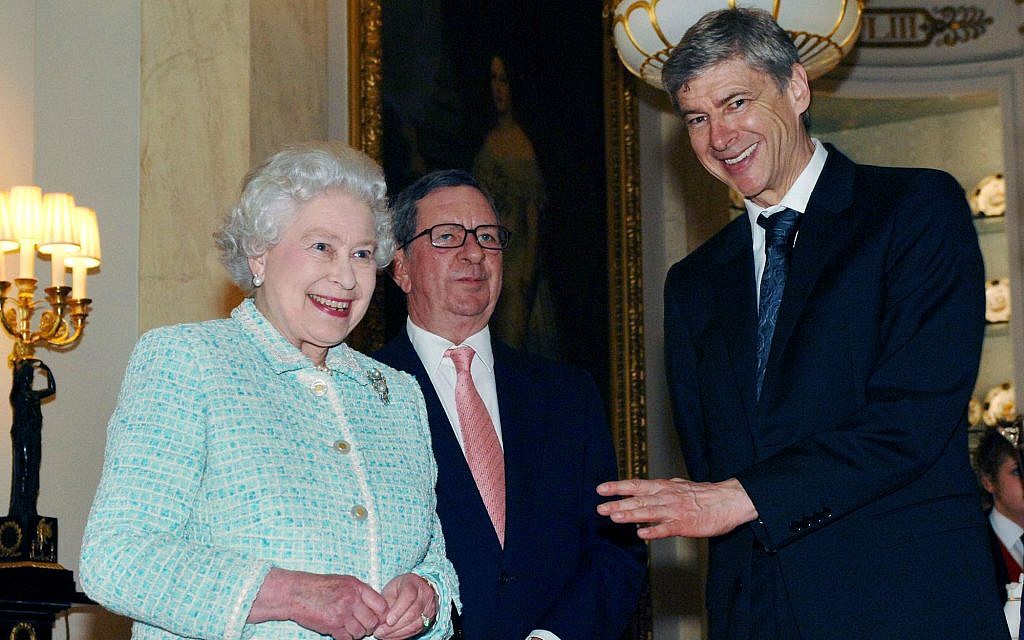 Sitting in front of the TV in the living room, the kids grew up watching glory unfold on green fields in their father’s land of birth a continent away, and never knew that the skill, the flair and the success of Wenger’s teams were not the norm. They were spoiled, and they too were hooked. (Okay, the boys were; but their sister was at least politely tolerant. Not so their mother, but we’ll come to that shortly.)

They too gradually internalized that they were unlikely to become professional football players with Arsenal or anybody else; the harsh truth started to sink in when Cesc Fabregas, just a few years older than them, made Wenger’s team, and was cemented when Jack Wilshire, their age, broke into the side. But it was for Arsenal they imagined themselves playing when we kicked about on concrete pitches in our Jerusalem neighborhood, or, at the weekends, with whoever else was around for a game, at Sportech in Tel Aviv. 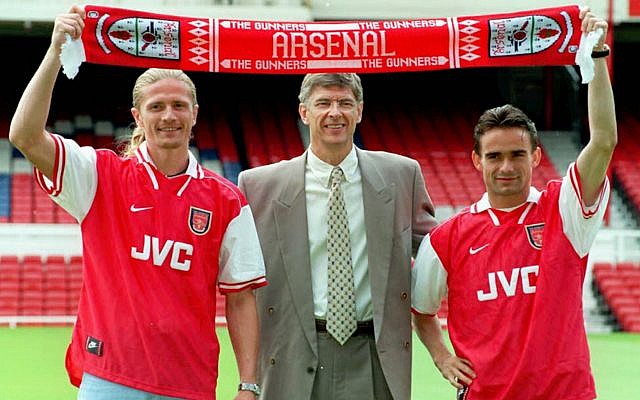 Arsene Wenger manager of English Premier league club Arsenal, centre, is flanked by his club’s two new signings, Frenchman Emmanuel Petit, 26, left, and Marc Overmars, 24, from the Netherlands as they are presented to the press on the pitch at Highbury stadium in north London Tuesday June 17, 1997. (AP Photo /Michael Stephens)

They were perhaps just a little too young to completely appreciate the achievement of Wenger’s Invincibles — who won the league in 2003-04 without suffering a single defeat.

But they delighted in the talents of Patrick Vieira, Emmanuel Petit, Robert Pires, Fredrik Ljunberg and, above all, Dennis Berkgamp and Thierry Henry, surely the most exceptional of all the players to have starred in the Wenger era. 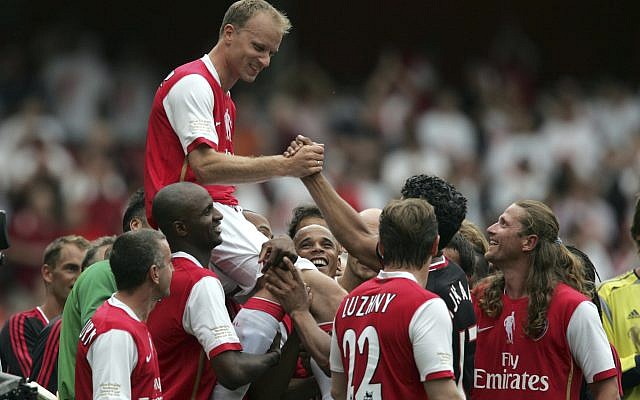 In this Saturday July 22, 2006 file photo, Arsenal’s Dennis Bergkamp is carried by players from Arsenal and Ajax at the end of his last game at Arsenal at the Emirates stadium, London. (AP Photo/Tom Hevezi, file)

I remember us screaming in delight at Ljunberg’s astonishing solo goal against Chelsea in the 2002 FA Cup Final; Berkgamp’s wonder finish against Newcastle that same year remains incomprehensibly brilliant to us all no matter how often we look at it.

When I happened to be away at times of key games, the boys would update me on our performances; they gave me a minute-by-minute account of our unraveling against Barcelona in the Champions League in 2011, five years after we’d blown our best chance before or since to win that most prestigious of titles against the same opposition.

On a handful of trips to England, we went together first to the architectural jewel that was Highbury, and then to the ultra-modern but soulless Emirates Stadium around the corner. In 2005, the five of us were at Highbury to witness one of the most magnificently farcical penalty screw-ups of all time, courtesy of Henry and Pires. Or rather, four of us witnessed it. With the entire stadium on its feet and screaming around her, my wife Lisa remained cheerfully immune, comfortably seated and reading The Times. 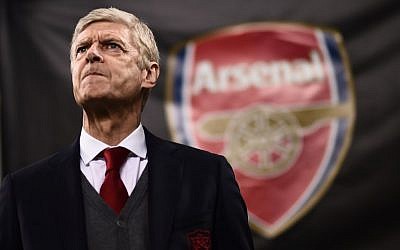 Arsenal manager Arsene Wenger, pictured during the UEFA Europa League round of 16 first-leg match AC Milan Vs Arsenal at the ‘San Siro Stadium’ in Milan on March 8, 2018. (AFP/Marco Bertorello)

Watching largely long-distance as Wenger first worked his wonders, and then faced growing dissent in the later years, we’ve had no real direct contact with Arsenal. I had an acquaintance who worked for the club — I’d met him when he came to Israel as part of Arsenal’s outreach programs, which included bringing Jewish and Arab teams together — through whom we once got to glimpse the hallowed Highbury lobby, and who later kindly gave us the name of friend that led to a work internship for one of my sons for a few months in London.

Our closest interaction with the team came when the boys and I took a stadium tour at the Emirates — and, like tens of thousands before and since, got to peak into the empty dressing room, and walk down the tunnel to pitch side. 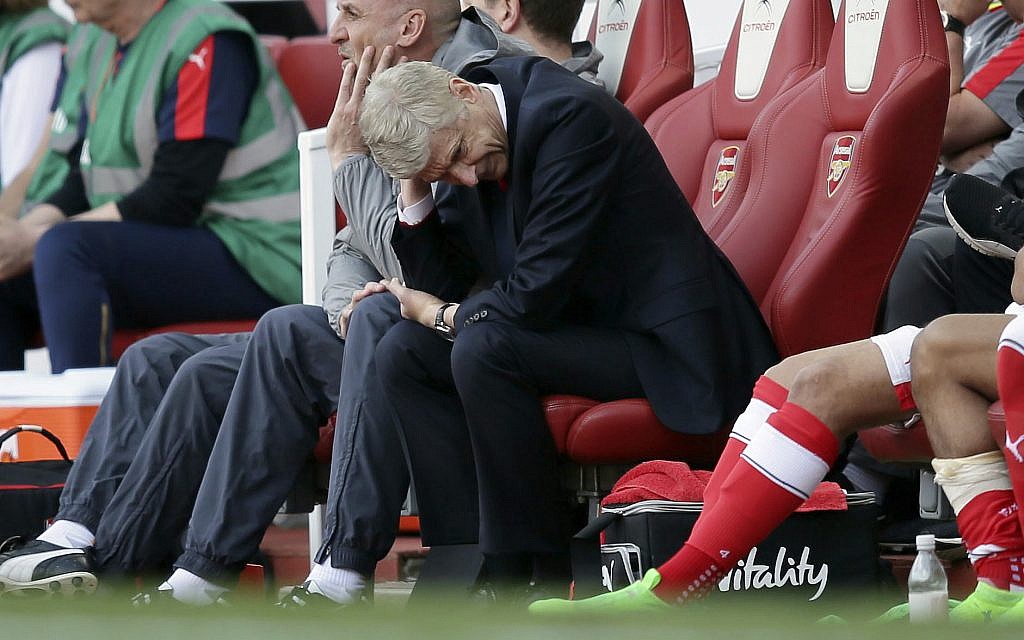 We even perched for a few precious seconds in the very chair in which Arsene sits during the games — where he would delight in his team’s breathtaking performances in the early years, and wrestle with his coats, hold his head in his hands, and throw down his water bottle in the later ones. 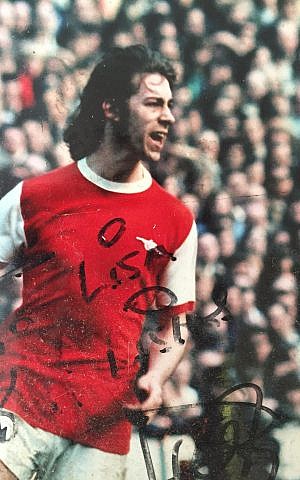 Our host on that tour was none other than Charlie George, he of the Double-winning goal of my youth. A fast-talking cockney, George is bald and bespectacled these days. But he lives on in his long-haired 1971 prime in a photograph we had him sign that day and that, I just went to check, remains affixed by a magnet to our fridge. I must have been feeling ironic that day, because I’d asked him to sign it: “To Lisa, best wishes, Charlie George.”

On Friday, Arsene Wenger announced that he was resigning after 22 years at the club. Twenty-two years in which the joy of football he conveyed to his players formed the sporting centerpiece of my kids’ childhood, passing my love of Arsenal onto the next generation.

They’re all young adults now — off on their own lives. If and when they do have kids, maybe they’ll have them sleep in those soft Arsenal onesies, and think now and then about some of the good times we all had together back when… back when Arsene Wenger’s Arsenal brought something red and white, spirited and joyful, into their young lives. 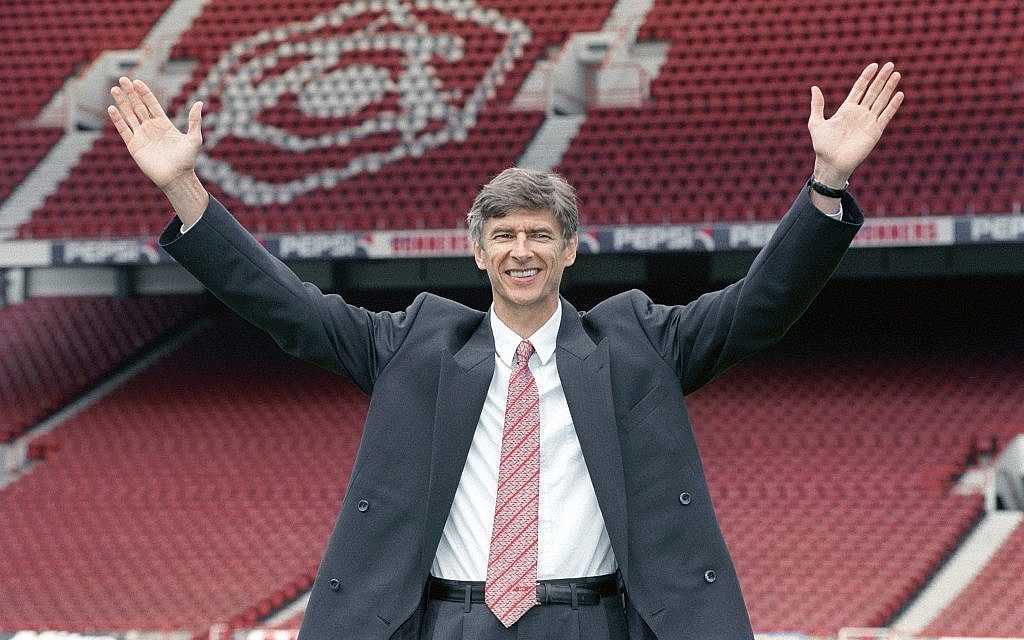 In this Sept. 22, 1996 file photo, new Arsenal manager Arsene Wenger gestures following a press conference at Highbury Stadium, London. (Dave Cheskin/PA via AP)
Is our work important to you?