Unlike the smaller Israeli settlements of Petza’el to its north and Tomer to its south, there is almost no signage directing travelers to the larger village of Fasa’il where over 1,000 people live.

Its access road is shoddily paved, much of the desert town lacks running water and children wander the streets in the middle of the weekday, with apparently little to keep them occupied.

It came as no surprise to Fasa’il’s residents that their village was not incorporated into the future Palestinian state drawn up in US President Donald Trump’s peace plan, which envisions Israel annexing just about all of the Jordan Valley. 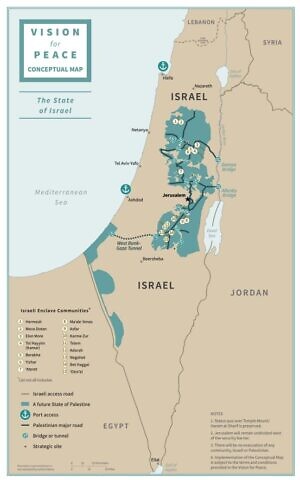 Vision for Peace Conceptual Map published by the Trump Administration on January 28, 2020

Fasa’il is among 13 Palestinian communities, some 80,000 strong in all, in the Jordan Valley that, under the proposal, will become enclaves surrounded by an expanded Israel. But contrary to the 15 Israeli settlements slated to become enclaves, which were neatly listed on the plan’s conceptual map, Trump’s “Vision for Peace” makes no mention of Fasa’il, or any of the 12 other Palestinian villages located in the middle of the Jordan Valley territory that Israel plans to annex.

And while the offer of semi-autonomous statehood remains largely irrelevant to Palestinians as their leadership has rejected it out of hand, the US plan’s intention to green-light Israeli annexation of the Jordan Valley and all West Bank settlements is as real and relevant as ever for Fasa’il locals. They are concerned that their already neglected status could further deteriorate in just a few short weeks if Prime Minister Benjamin Netanyahu makes good on his promise to begin efforts to apply Israeli sovereignty to those areas on July 1.

Netanyahu has said Israel will not annex Palestinian residential areas and that they will remain under PA rule, but mapping experts say such a policy will require Israel to wall off all 13 Jordan Valley enclaves in order to maintain a sovereign border there.

“We’ll become prisoners on our own land,” said Iyad Abu Zein, who owns a convenience store in Fasa’il. “If I try to travel to [the West Bank cities] of Nablus or Jenin, I’ll be blocked from doing so.”

Abu Zein, along with the five other Fasa’il residents who spoke with The Times of Israel during a Wednesday visit to the town, admitted to only knowing the general details of the Trump plan, yet they all were certain that it represented something they opposed.

Presented with the proposal’s conceptual map on this reporter’s iPhone, Abu Zein began to chuckle. “Where’s Fasa’il?” he asked. As he pinched the screen of the phone to zoom in on the map, a group of nearly a dozen young children crowded around him at the entrance to the mini-market. “Fasa’il’s not in Palestine anymore, kids!” he cracked. 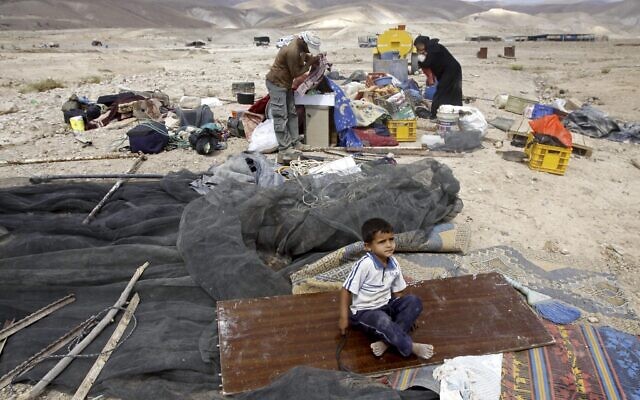 Palestinians inspect their belongings in an area where about 10 illegal tents were destroyed by Israeli forces in the West Bank village of Fasa’il in the Jordan Valley on June 14, 2011. (AP/Mohammed Ballas)

Staring at the porous territory earmarked for the Palestinian state, he added, “I knew this plan would be no good.”

Others in the village were even less familiar with the proposal’s details and said they had heard rumors that their homes might be at risk of demolition if Israel moves forward with its annexation plans.

“Nobody is telling us what our fate will be — not Israel, not the Palestinian Authority. I’m very concerned for my family,” said Mohammed Dir’at, a 32-year-old construction contractor.

But while Abu Zein and Dir’at were convinced the looming annexation plans represented a threat, Tareq al-Samia argued that the situation on the ground would remain the same. 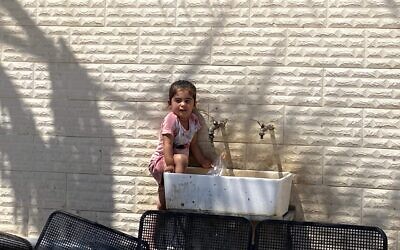 A girl collects water from a sink in the Jordan Valley Palestinian village of Fasa’il on June 10, 2020. (Jacob Magid/Times of Israel)

“Israel already controls all the land here. Just last week, the army prevented me from accessing my lands because they were doing a drill. How can things get any worse?” said the 52-year-old farmer.

In Furush Beit Dajan, a Palestinian village some 20 kilometers north of Fasa’il, Mahmoud Bisharat disagreed with al-Samia’s claim. “Right now, the area feels like a half-military zone. If Netanyahu and Trump move forward with annexation, it will be a complete military zone.

Asked if he expected tensions to escalate into violence if Netanyahu keeps his promise to annex some 30 percent of the West Bank, the 40-year-old tomato farmer was skeptical. “People are tired. The coronavirus has destroyed an already decimated economy. Maybe there will be protests initially, but I don’t think that the response will extend beyond that.”

Similar to several of the Fasa’il residents, Bisharat made a point of stressing that “no matter what Israel decides to do, I will not leave my land. There will not be another Naqba or Naqsa,” he said, using the Arabic words for the 1948 Independence War and the 1967 Six Day War, respectively — when thousands of Palestinians left or were driven from their homes. 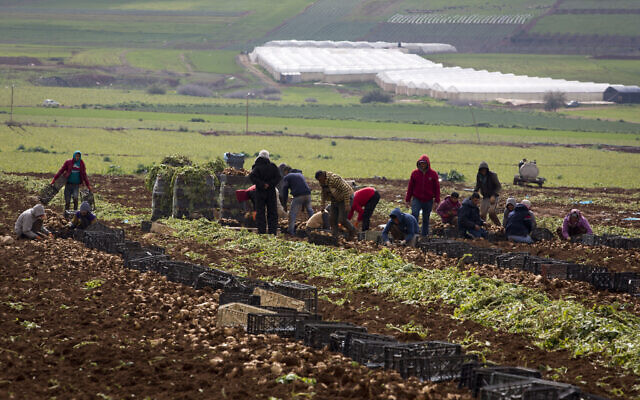 Passing on a blue ID

If Fasa’il residents feel they are transparent to the Trump plan’s architects, the dozens of Bedouin hamlets that pepper the Jordan Valley may be even more so.

Israel Defense Forces reserves colonel Shaul Arieli, a mapping expert, said he does not include them in his count of 13 Palestinian enclaves in the Jordan Valley because they are so small and harder to track, but he acknowledged that they likely are home to several thousand people.

One of those Bedouin outposts is Khirbet Tell el Himma, 25 kilometers north of  Furush Beit Dajan. There, Sheikh Ibrahim Abu Ayoub speculated that unlike the more established Palestinian enclaves that he believed would ultimately go untouched, Israel would try and raze his village if it moved forward with annexing the Jordan Valley.

“But even if they shoot me, I will not leave,” he declared while raking the coals on the mini-stove he used to prepare coffee. 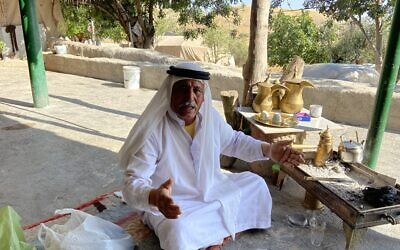 Sheikh Ibrahim Abu Ayoub in the Bedouin hamlet of Khirbet Tel Hemma in the Jordan Valley on June 10, 2020. (Jacob Magid/Times of Israel)

Asked if he would be interested in being granted Israeli citizenship if Netanyahu were to include Khirbet Tell el Himma among the annexed territory, Abu Ayoub was dismissive.

“Why would I want an Israeli ID? I’m Palestinian,” he said, a sentiment shared by the residents of Fasa’il and Furush Beit Dajan.

“They might say in the beginning that they’ll give me more rights, but the gold will quickly turn into coal,” he said, referencing recent Israeli confiscations of water and electricity infrastructure that had been installed in the hamlet without a permit.

Another resident of Khirbet Tell el Himma said that if the Israeli government were to make a “genuine citizenship offer” as a part of its annexation plan, he would be willing to accept it. However, the 26-year-old shepherd admitted his opinion was not very popular among Palestinians in the area and declined to disclose his name. 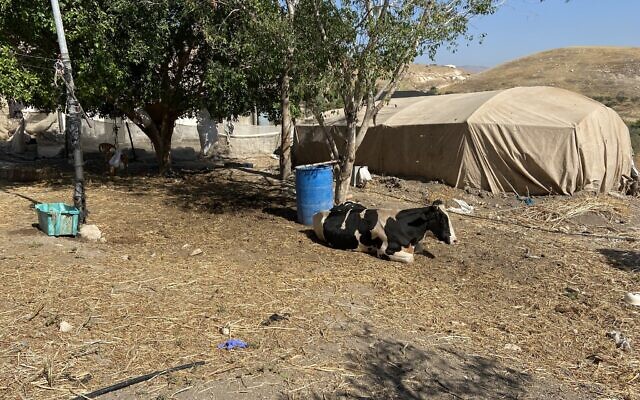 A cow rests in the Bedouin hamlet of Khirbet Tel Hemma in the Jordan Valley on June 10, 2020. (Jacob Magid/Times of Israel)

Perhaps because he too did not know many of the Trump plan’s details, what the 74-year-old Abu Ayoub appeared more concerned with were settlers in the area, who he claimed have prevented his family’s animals from grazing.

Pointing in the direction of the nearby Shirat Ha’asabim outpost, Abu Ayoub said, “I used to take my cow near there to graze, but ever since the outpost was established five years ago, the settlers block me from going there.”

“Trump sides with the settlers. And whatever amount of land he gives them, I’m sure they’ll just end up taking more,” he said.