Aschalew Abebe, who immigrated to Israel from Ethiopia in 2003, is an Ethiopian- Israeli success story.

Now 34, he is married with three children and has his own cleaning company in the central city of Lod.

He completed his military service in the Nahal infantry brigade and continues to perform reserve duty, which he did twice last year.

All of his brothers have studied in yeshiva. One is currently serving in the Israeli airforce, two completed service with the Paratroopers Brigade and another flew to the US earlier this year as an emissary to teach Judaism.

Abebe says that more than 60 of his 171-plus family members in Israel have served in the army or the police or performed national service. 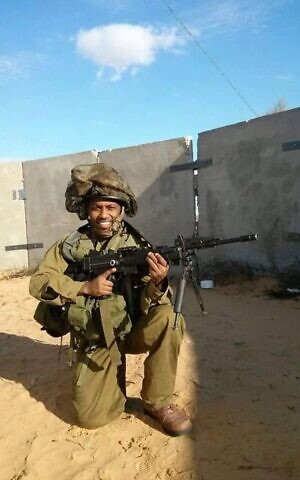 Which is why he cannot understand the fact that just one cousin — Zemen — has been left waiting to immigrate in Gondar for more than 20 years.

In an open letter on Facebook in September, Abebe wrote that his family was Jewish and Israeli enough to serve the state, but apparently not enough to be reunited with the only cousin left behind in Ethiopia.

“They separated him when my grandmother immigrated,” Abebe told the Times of Israel. “The aliyah people told grandma [who raised Zemen after his own mother died] that he’d come later, but then denied they’d ever said it. Two years ago, he was also told he would come to Israel. He’s fallen between the cracks.”

Zemen is now “over 30, with two or three children,” Abebe went on. “There isn’t a day when we don’t talk to him.  He’s Jewish. We just do not understand why he’s still there.”

A leading activist in the campaign to bring the remaining Jews of Ethiopia to Israel, Abebe met with Prime Minister Benjamin Netanyahu just before the last election.  “He asked me to give him Zemen’s details. And he promised to help, ” Abebe said.

Since then, he has heard nothing.

“This government has lost its humanity,” he charged.

Abebe and his relations are praying that Zemen will be among the up to 2,000 community members due to be airlifted to Israel by the end of this year in line with a government decision announced in September on the basis of available funds.

Many other families are similarly hoping to be reunited with loved ones that they haven’t seen for years. 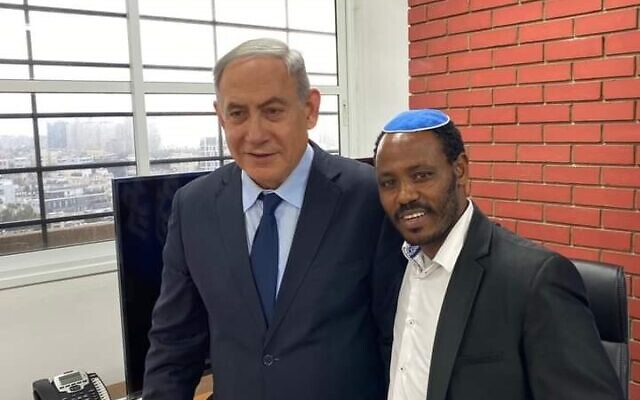 Governments have been split over fate of converts to Christianity

The state completed the airlift of the Beta Israel Ethiopian Jews in the 1990s. But successive governments have been split over accepting into Israel the remaining so-called Falash Mura, who converted to Christianity and do not qualify for citizenship under the Law of Return, despite rulings by the likes of former Sephardi chief rabbi Shlomo Amar that Jews forced to convert to Christianity were “unquestionably Jews in every respect.” (Falash Mura is a pejorative term. The preferred description is “remnants of Ethiopian Jewry.”)

Backed by Rabbi Ovadia Yosef, the late Sephardi chief rabbi and spiritual leader of the Shas party, which currently controls the Interior Ministry, Amar ruled that it was forbidden to question this community’s Jewishness.

But because of the different categorizations, families have been ripped apart, with some in Israel and others waiting in Ethiopia, while successive governments have decided not to decide.

November 15 — the date this year on which the annual Sigd festival will be held by the Ethiopian community to renew the covenant with God and the Torah — will also mark the passage of five years to the day since the government passed Decision 716 (in Hebrew) to bring all those still waiting to come to the Holy Land — subject to various criteria — within five years.

Since then, just 2,257 Ethiopians have been airlifted to the Jewish state, in dribs and drabs, according to Jewish Agency figures.

September’s decision brought hope as well as deep disappointment to families, many of whom feel betrayed by government promises that have not been upheld.

On the ground preparing the January airlifts

Interior Ministry officials have been on the ground in Ethiopia for the last ten days conducting interviews for selection that must be finished by the end of this year. Airlifts are to be completed by the end of January.

The Jewish Agency has already dispatched 14 out of close to 30 staff earmarked for Gondar and Addis Ababa to organize logistics, vaccinate those selected to immigrate and issue travel documents and flight tickets. It is currently hiring and training Hebrew instructors for both centers. The Agency is launching a fundraising campaign towards the effort.

Candidates for aliyah will have to prove that they have at least one parent who already came to Israel within the framework of earlier government decisions, that first degree relatives in Israel have requested that they immigrate, that they have been waiting in Addis Ababa or Gondar since no later than January 1, 2010, and  appear on waiting lists compiled from 1999 onwards, and that they pledge to undergo conversion to Judaism on arrival in Israel.

Those meeting the criteria will be allowed to bring husbands and wives, young children and older children — so long as the latter are not married and have no children — and, where relevant, the other parent as long as that parent is not remarried.

The decision allocates NIS 379 million ($112.5 million ) to be spent on bringing the 2,000 Ethiopians to Israel, converting them to Judaism, housing them in immigrant absorption centers and providing them with a range of services, including grants toward permanent housing. All the newcomers will be given permanent resident status and will go into coronavirus quarantine as soon as they arrive.

As regards those left behind, Aliyah and Absorption Minister, Pnina Tamano-Shata, has been instructed to formulate — within two months — an outline for completing the Ethiopian Aliya on the basis of Decision 716 and for examining all other requests to immigrate, with a view to closing the two Jewish centers once and for all.

Although there have been no reports so far of coronavirus hitting those waiting, the disease continues to claim lives all around, severe malnutrition in the Jewish community centers is rife and escalating tension between Prime Minister Abiy Ahmed’s government and the Tigray People’s Liberation Front, just over the border from Gondar, is raising fears of a bloody civil war. 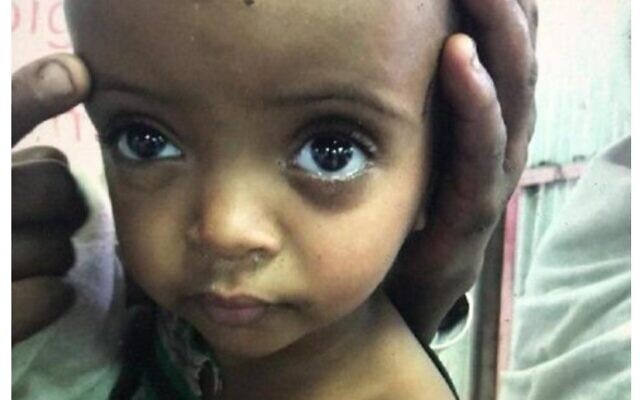 Both the Population and Immigration Authority and the Aliyah and Absorption Ministry believe that some 8,000 Ethiopians have been waiting since before 2010 and still need to be brought to Israel.

Activists claim that figure should be closer to 9,000, pointing to a 2015 census carried out by the community itself, which reached 9,400, subtracting those who died or emigrated since and adding for natural growth.

Those in the Ethiopian capital, Addis Ababa — accounting for around a quarter of the total — have been waiting for more than 20 years, while the rest, in Gondar city, have been hanging on for 15 to 20 years.

All of them left their villages and farms for the two cities to eke out an existence from casual labor until, they hoped, they would be airlifted to Israel.

But with the coronavirus pandemic, work has dried up and food is in short supply, with prices up by 35 to 50 percent. Families in Israel who previously sent their relatives money are strapped for cash because of their own coronavirus-related problems, and philanthropic organizations are less able to raise donations due to the pandemic.

The decision to bring 2,000 of the community also represented a partial victory for Pnina Tamano-Shata, Israel’s first-ever Ethiopian-born cabinet minister, who is in charge of aliyah and immigrant absorption. In August, she presented a NIS 1.3 billion ($382.6 million) framework to the Knesset aliyah committee to bring 8,000 Ethiopians to Israel and to close the camps in Gondar and Addis Ababa for good. 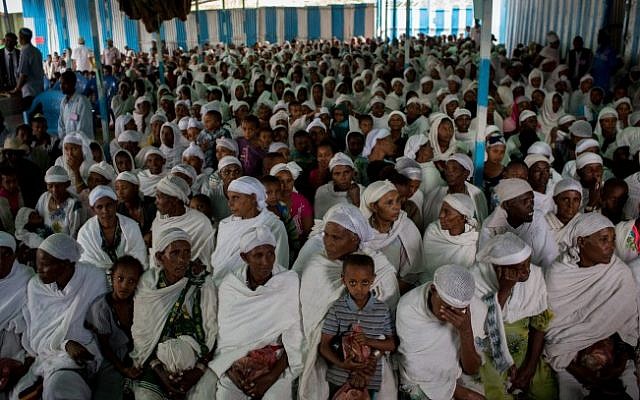 Members of the Jewish Ethiopian community wait for prayer service before attending the Passover seder meal, in the synagogue in Gondar, Ethiopia, April 22, 2016. (Miriam Alster/FLASH90)

Her plan would have seen 4,500 Ethiopians arriving in Israel between October and the end of December this year, with a further 3,500 people being airlifted between 2021 and 2022.

Taking promises with a pinch of salt

Israelis from Ethiopia have learned to take government promises with a pinch of salt. On November 25, the group Activists and Families for Bringing the Jews of Ethiopia will demonstrate in front of the Prime Minister’s Office against broken pledges.

In February, just days before the March 2 election, Prime Minister Netanyahu appeared on a video clip with children from the community saying that the political uncertainty in Ethiopia was creating “mortal danger” and that Israel was obliged to look after each community member still waiting to immigrate.

On February 14, the Likud party issued a tweet (in Hebrew) pledging that, “Around 7,500 Jews will immigrate from Ethiopia by the end of 2020.” It said, “Likud commits to bringing the remainder of Ethiopian Jewry in an organized plan that will be approved during the first 100 days of a Likud government.”

On March 2, election day, the party sent out a video clip of Netanyahu promising,  “I want to bring the whole Falash Mura community immediately after the elections, when there’s a government and it will be impossible to stop me.”

Gelagay Tefara, who immigrated in 2014 and now has four siblings, as well as his parents, in Israel, is still waiting for his other four siblings to arrive from Addis Abeba and Gondar. They have been waiting for 25 years. 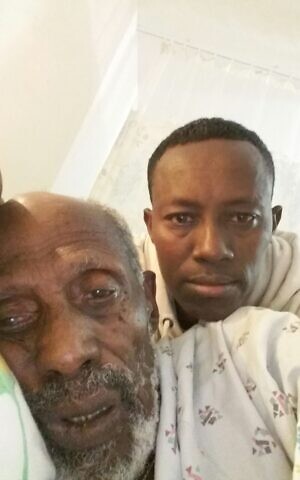 Gelagay Tefara pictured with his 98-year-old father who is still waiting to see children left behind in Ethiopia. (Courtesy)

“I don’t know why they’re still there. I have no answer,” he said. “There’s nobody to talk to. We’ve been to the Interior Ministry. Who haven’t we been to? I’ve written to all the ministers and have met with Pnina Tamano-Shata more than once.”

Tefara, a 38-year-old divorcé with two children, from the southern coastal city of Ashdod, had been managing to send money to Ethiopia when COVID-19 struck and he was put on unpaid leave.

“Today, I’m no longer in a position to send them money,” he said. He added,  “My father is 98 and confused. The only thing he remembers is the names of the children that he’s still waiting to see.”