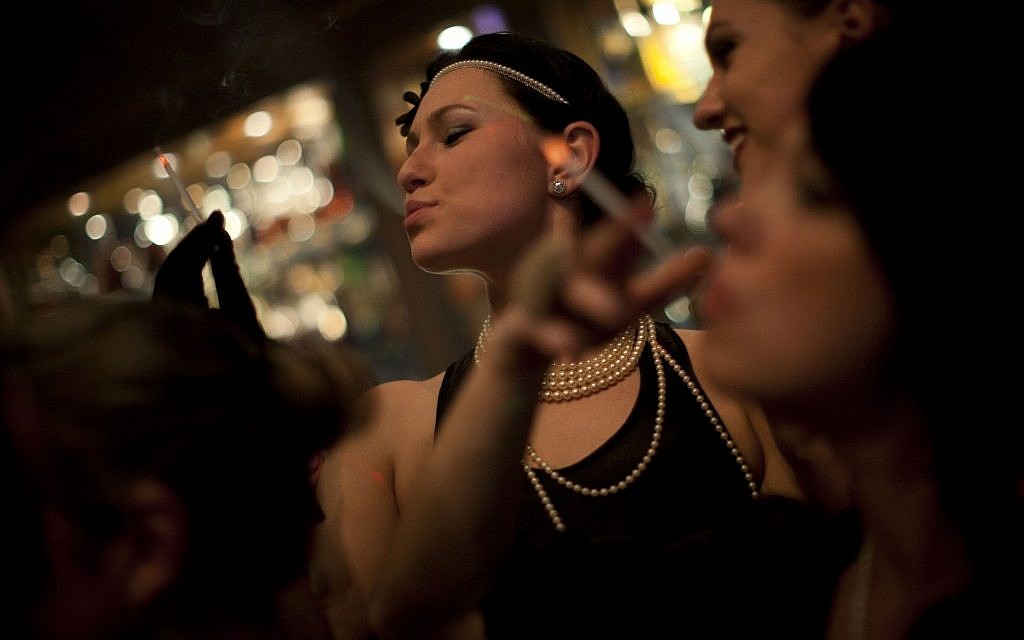 TEL AVIV, Israel (AP) — In parts of Israel, it’s hard to find a single Hebrew sign in a sea of Cyrillic. Shopkeepers address customers in Russian, and groceries are amply stocked with non-kosher pork, red caviar and rows of vodka. Russian pop beats thump at bars, and in some homes, people will as likely be hunched over a chessboard as a computer keyboard.

The Soviet Union crumbled 20 years ago, and in the aftermath, more than 1 million of its citizens took advantage of Jewish roots to flee that vast territory for the sliver of land along the Mediterranean that is the Jewish state. By virtue of their sheer numbers in a country of 8 million people and their tenacity in clinging to elements of their old way of life, these immigrants have transformed Israel.

Israel has the world’s third-largest Russian-speaking community outside the former Soviet Union, after the US and Germany. Russian-speaking emigres may not conjure up the same recognition as the country’s black-hatted Orthodox Jews or gun-toting soldiers, but they are just as ubiquitous — maintaining habits more suited to the “old country” than their adopted Mideast homeland, like wild mushroom foraging or winter dips in the Mediterranean, the closest substitute to frigid Siberian waters.

Today, Russian-speaking emigres and their children occupy virtually every corner of Israeli society, from academia and technology to the military and politics. A political party formed by Israel’s recently resigned foreign minister to cater to Russian-speaking immigrants like him has grown from a marginal force in politics to one of its major powers.

The Russian-speaking community also wields an outsized influence in other aspects of Israeli life. Every fourth employee in Israel’s flourishing high-tech industry is a Russian-speaking immigrant, as is every other engineer. The world’s second-ranked chess master, Belarus-born Boris Gelfand, lives in Israel, and about a quarter of Israel’s Olympic coaches grew up in the former Soviet Union.

Not all newcomers found work in their professions. Many artists became janitors or teachers. One Moldovan trapeze artist now operates a crane.

“I love the circus very, very much, but my work is like the circus,” said Irena Zagoruyko, speaking by cellphone atop a 56-meter (185-foot) crane.

While the wave of immigration from the former Soviet Union is widely regarded as successful, there were also frictions.

Religion is a sensitive subject. Many immigrants have tenuous Jewish lineage or none at all.

There is also a certain disdain on both sides, with some immigrants saying they brought talent to a cultural backwater, and some Israelis saying the Russian-speaking immigrants brought prostitution, corruption and crime.

To some degree, many Russian speakers have insulated themselves from the broader Israeli society with Russian bookshops, Russian restaurants, Russian television and Russian newspapers.

And they never forget the beloved Chekhov and Dostoyevsky of their motherland.

“That’s why Soviet immigrants never connected to Israeli society all the way,” says Roman Bronfman, a former Israeli lawmaker born in today’s Ukraine. “They felt they were connected to one of the most glorious cultures in the world.” 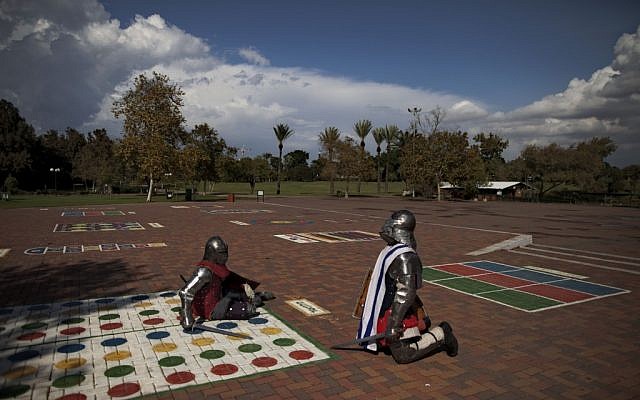 Immigrants from the former Soviet Union practice sword-fighting in full knight armor, in a public park in Ramat Gan, central Israel. Medieval combat simulation is popular in ex-Soviet countries and some immigrants have continued the hobby in Israel (photo credit: AP/Oded Balilty) 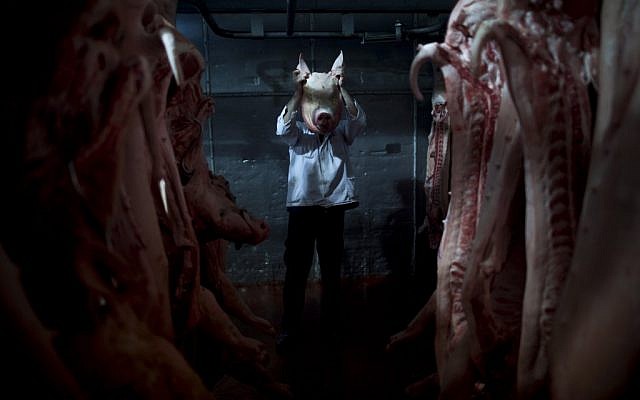 An employee of the Mizra pork factory poses with a pig’s head in a refrigerated warehouse in Kibbutz Mizra, northern Israel. The million-strong Soviet immigrant community has increased customer demand for pork in the country, a non-kosher food rarely eaten by Israeli Jews or Arab-Israeli Muslims. (photo credit: AP/Oded Balilty) 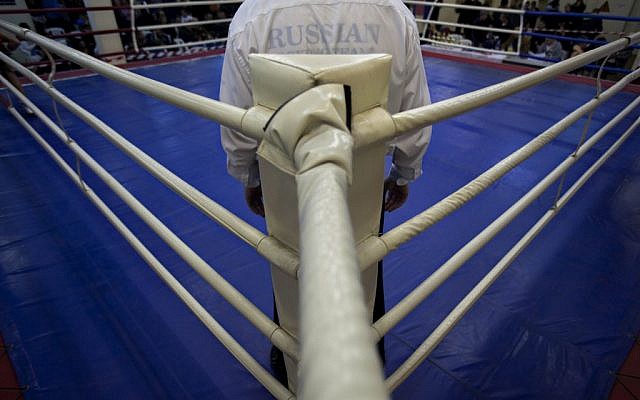 A Russian-speaking Israeli immigrant referee stands in the ring during a boxing competition for Israeli youth, in the southern Israeli town of Kiryat Gat. Many of Israel’s boxing clubs are run by immigrants from the former Soviet Union (photo credit: AP/Oded Balilty) 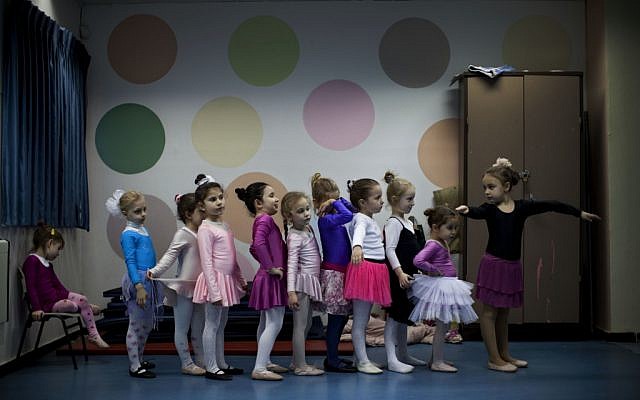 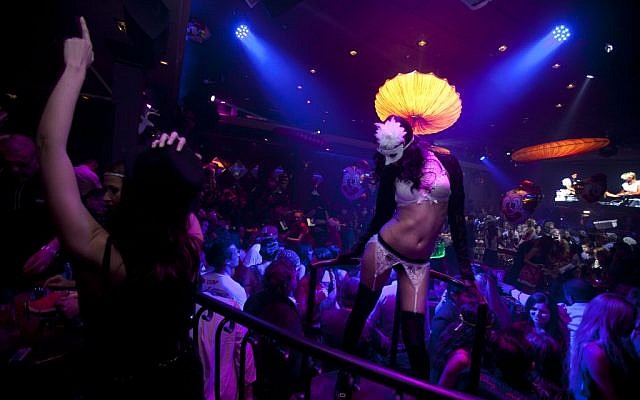 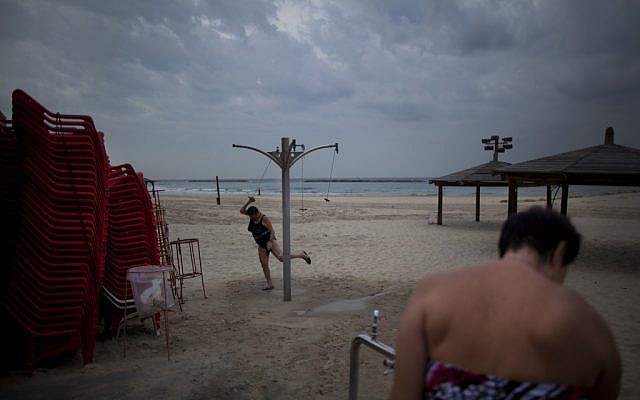 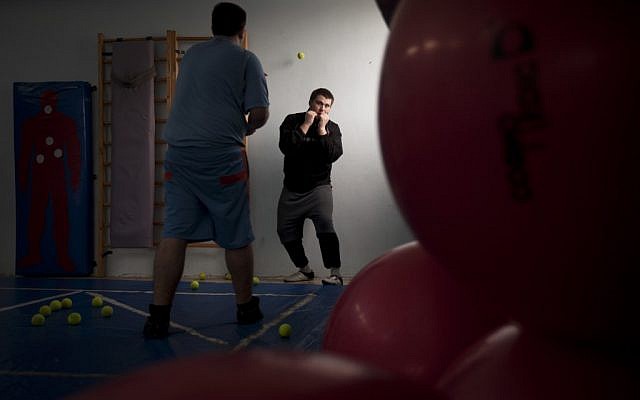 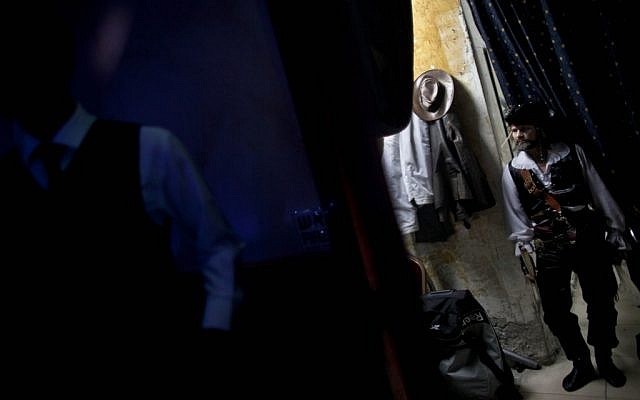 Acrobats wait in a dressing room before their show at L’Chaim, a Russian restaurant in Ashdod. Many circus performers emigrated to Israel from the former Soviet Union, and acrobatic shows are a unique feature of Russian restaurants in Israel (photo credit: AP/Oded Balilty) 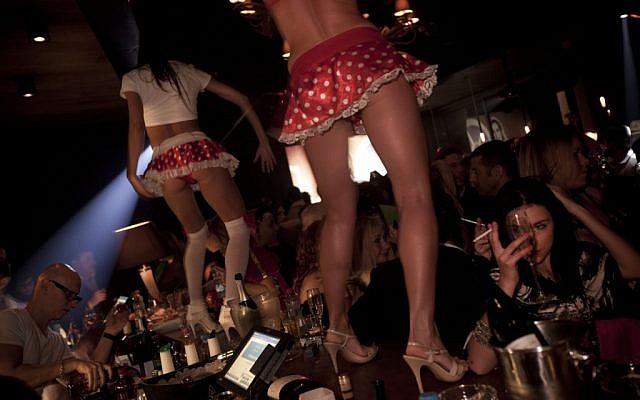 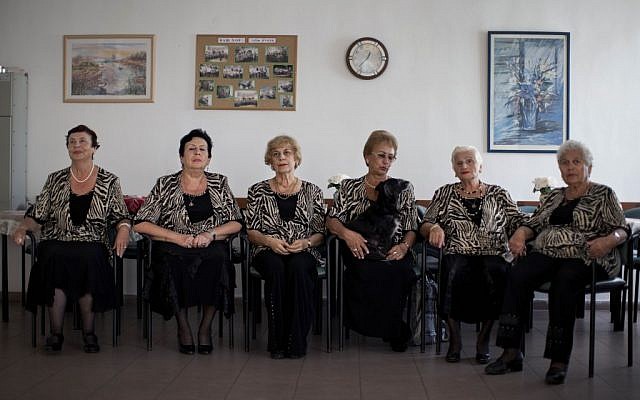 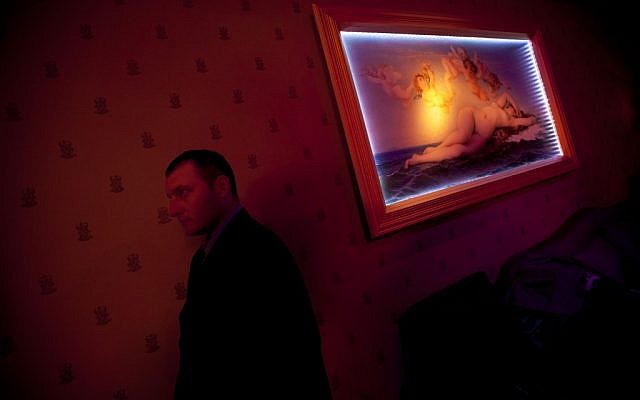 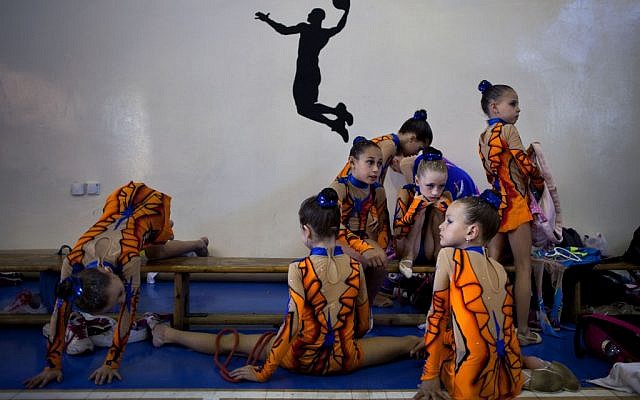 Gymnasts from Russian-speaking immigrant families warm up at a gymnastics competition organized for Israel’s immigrant community, in the southern resort city of Eilat. Most of Israel’s Olympic gymnasts are immigrants from the former Soviet Union. (photo credit: AP/Oded Balilty) 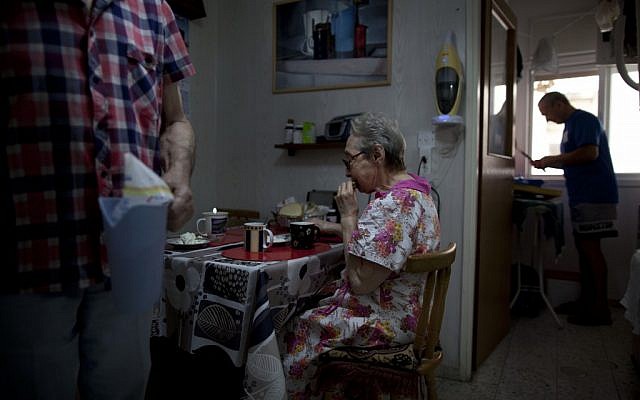 Bella Perlin, center, and Avraham Shapiro, left, Belarusian immigrants, eat breakfast in their home in Hadera, northern Israel. They emigrated to Israel in 1991 at the height of the wave of immigration from the former Soviet Union. (photo credit: AP/Oded Balilty) 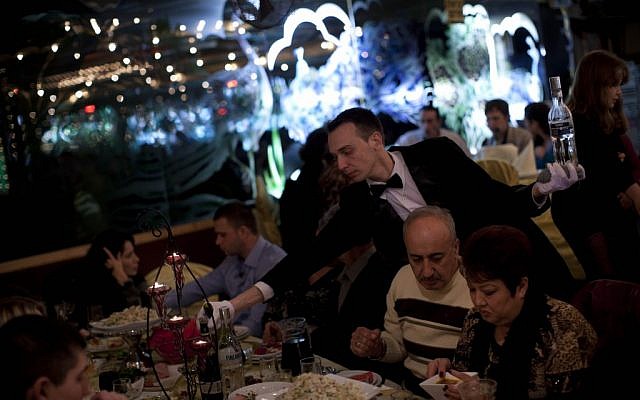 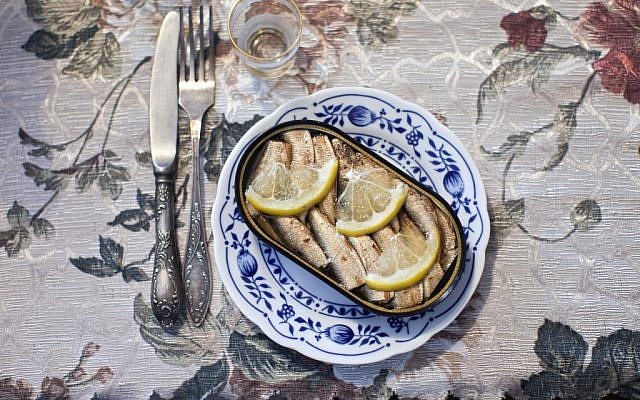 Canned sardines are served at a family dinner at the home of Moldovan immigrant Puma Rotner in Ashdod. Rotner left her native city of Bendery in Moldova in 2006, bringing her dishes and silverware to Israel. (photo credit: AP/Oded Balilty) 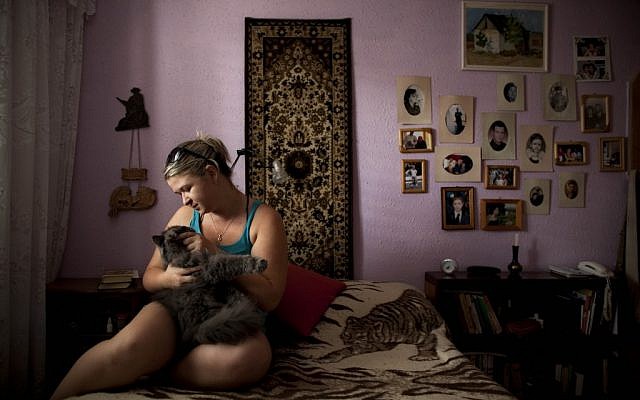 Alexandra Bahman, who emigrated to Israel from Moldova in 2006, sits in her bedroom with her cat. Bahman left Moldova with the carpet and photos that now decorate her bedroom walls, in Ashdod. (photo credit: AP/Oded Balilty) 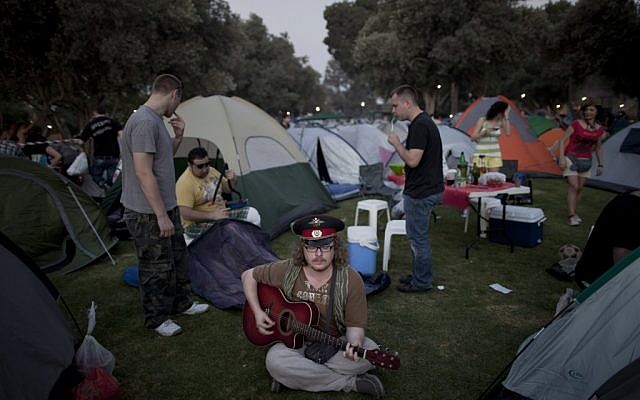 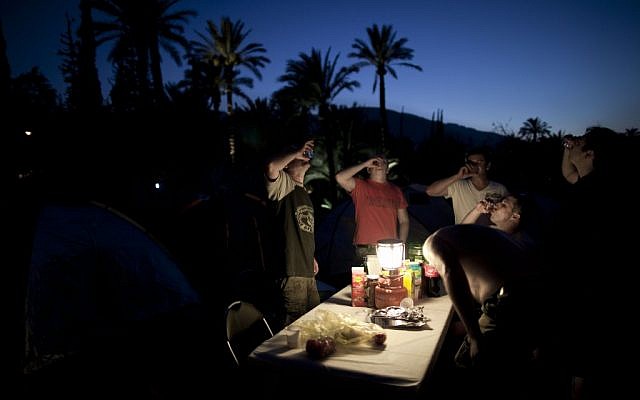 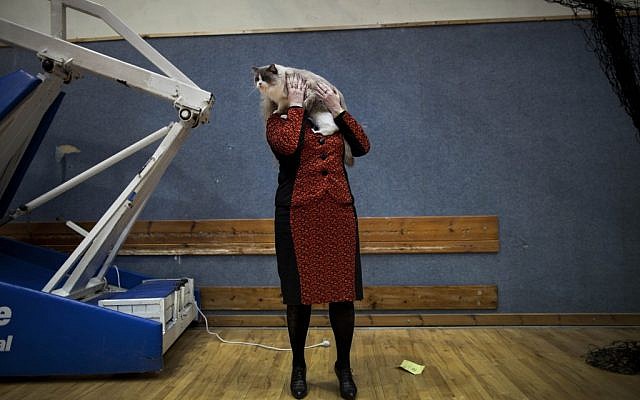 Natalia Lerner, who immigrated to Israel in 1991 from the city of Tyumen in Siberia, presents her cat to the judges of a cat competition in the central city of Holon. Cats are prominent in Russian culture, and most members of Israeli cat societies are immigrants from the former Soviet Union. (photo credit: AP/Oded Balilty) 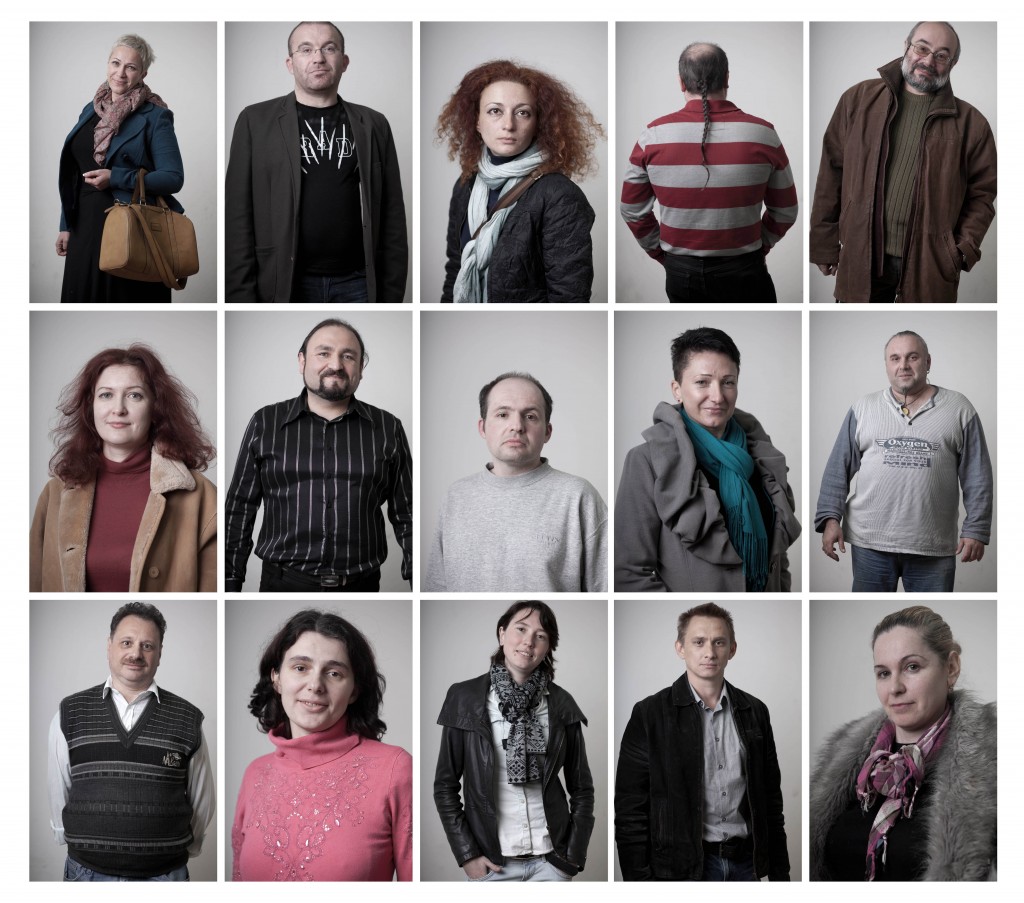 In this combination of fifteen photos all taken on Dec. 24, 2012, Russian-speaking Israelis who immigrated from the former Soviet Union, and who are competing in a Russian-language trivia contest in Tel Aviv, pose for portraits. (photo credit: AP/Oded Balilty)