Residents of Qamishli, a liberal enclave that has grown amid the civil war, tell a ToI writer they’d greet Jewish returnees with open arms — however unrealistic that seems today

QAMISHLI, Syria — In today’s Syria, there are not many places where one can openly ask about the former Jewish community. But Mahmoud doesn’t seem to feel the need to lower his tone. In Qamishli — a bustling northern city that numbered 185,000 in 2004 and has likely only grown in the years since Syria’s civil war began — he has nothing to fear.

“I don’t understand the problem,” says the local shoemaker, who keeps shop near the Qamishli bazaar. “The neighbors of our Prophet Muhammad, peace be upon him, were also Jews, so I see no reason why we should not have Jewish neighbors. Years ago, there were many Jewish families that used to live with us in peace.”

Mahmoud doesn’t remember much from when Jews still lived in Qamishli; he was just a child when most Jews left. “After the first wave, a few Jewish families remained here, but in the end, everyone left, leaving behind them houses, shops, and property,” he says.

After speaking for a few minutes, he asks, “Do you want me to show you where our Jewish neighbors used to pray?” 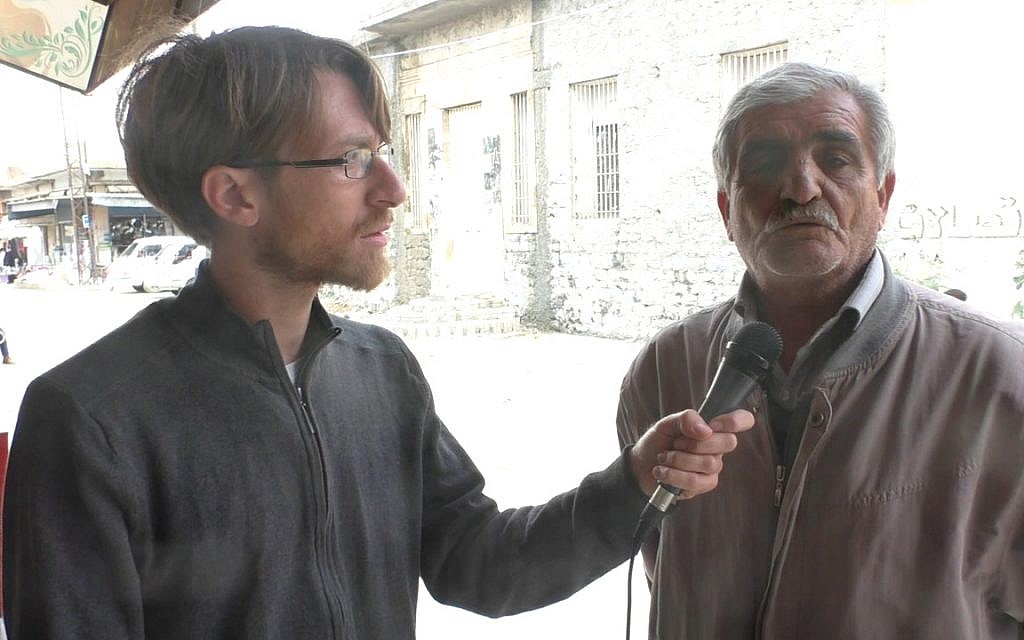 Mahmoud walks through the alleys of the local market, passing stalls selling cigarettes alongside hunting rifles. The strong aromas of spices and freshly brewed coffee beans are almost intoxicating.

A few minutes later, he stops at a structure that appears to still be under construction. 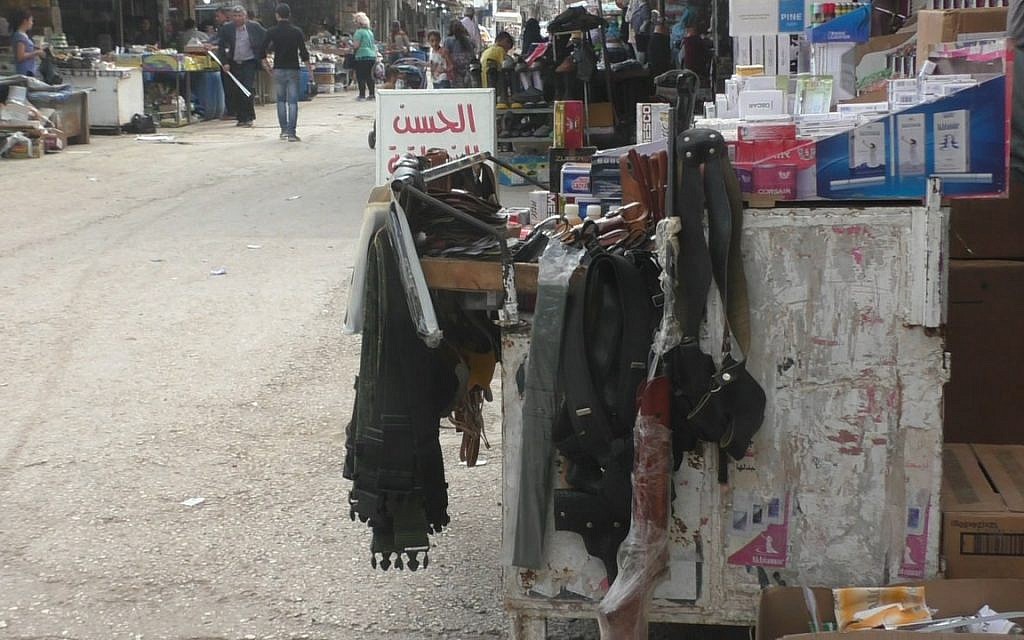 Looking at the unattractive building, it’s hard to tell if he is joking. There is not a single sign indicating that this place once served as a synagogue.

With a sullen smile, Mahmoud explains the lack of Hebrew inscriptions or Stars of David. 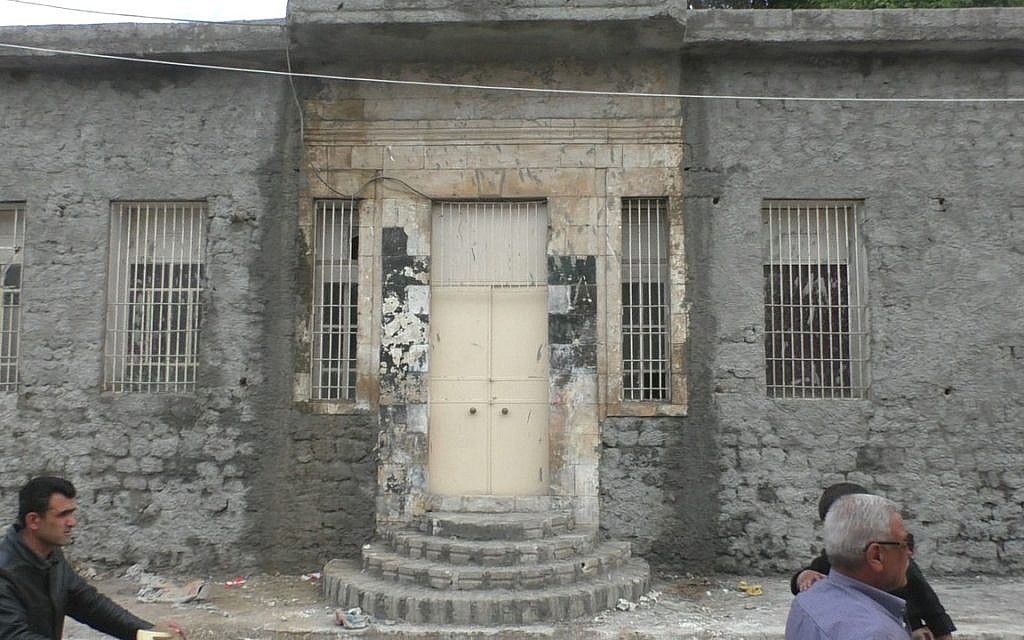 The front of the one-time synagogue in Qamishli, Syria. (Ziv Genesove/ Times of Israel)

“It’s because of Assad, the father,” he says.

Mahmoud explains that during the reign of Hafez al-Assad, the Syrian regime destroyed the entire outer wall of the synagogue so that no hint of Jewish ownership would remain, and turned it into a military structure.

“This was one of the last remnants that testified to the presence of the Jewish community here,” Mahmoud says gloomily.

The Jews of Qamishli were among the first settlers of this city, established in the 1920s by the area’s French rulers.

Most of them came from Nusaybin, located near the southern border of Turkey. Over the years, the Jews of Qamishli enjoyed equal status as the rest of the city’s residents. They worked in government jobs as well as crafts, peddling, and commerce. 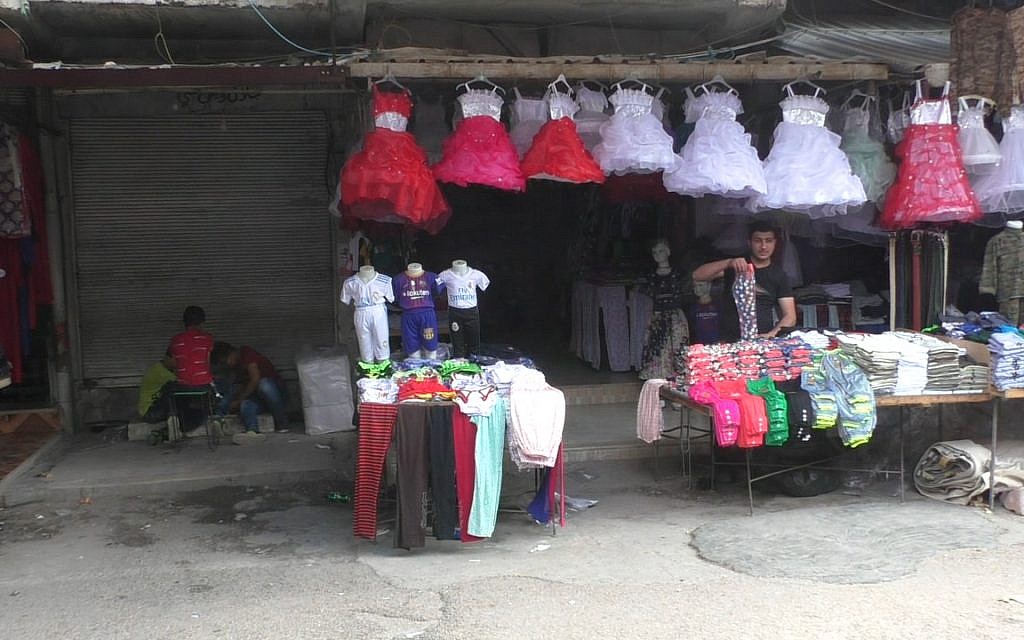 After the UN’s 1947 declaration of the partition plan for Palestine, though, the Jews began to be perceived by authorities and locals as Zionists and traitors.

First, Jews were dismissed from their jobs in government offices. Then came riots and robberies, as well as many restrictions — including the prohibition on visiting public gardens and cinemas. In 1963, the number of Jews in the city dropped to 800 after most of them chose to emigrate to Israel. After the 1967 Six Day War, there remained a mere 150. It is unlikely that any Jews live here today.

While the synagogue was stripped of any identifying symbols, there is one place in town that may attest to Qamishli’s once-thriving Jewish presence: Ezra’s spice shop.

The store is located on a street that was once full of shops owned by Jews — in fact, the locals used to call it “the Jewish market.” 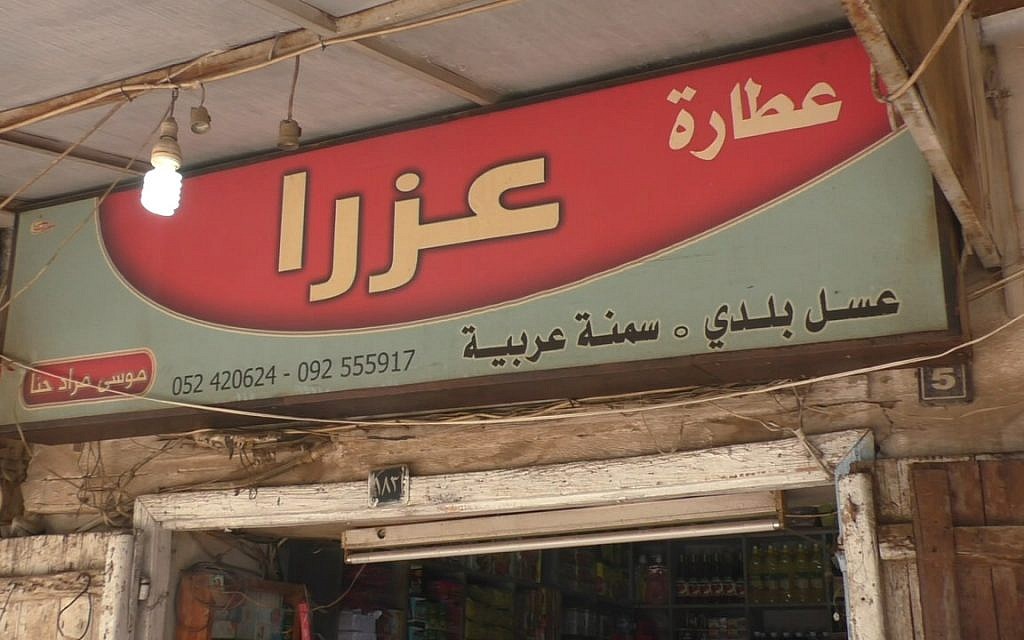 In Qamishli, Syria, a store with ‘Ezra’ written in large Arabic script recalls the days when a large Jewish population lived in the city. (Ziv Genesove/ Times of Israel)

Today there is no hint of the once Jewish-dominated district except for a small spice shop that still proudly bears the name “Ezra” in large Arabic script. Although the shop is quite small, it draws a lot of foot traffic.

“I just started working here a few months ago,” a salesman tells The Times of Israel while packing colorful bags of spices for a customer. “I don’t have much information, but if I’m not mistaken, Ezra left a few decades ago. He sold the shop to my boss, a Christian Assyrian, who has been running the place since then.”

The salesman says a middle-aged man named Abdul might remember details from the time when Jews used to live in Qamishli.

“You’ll see him here down the street, carrying a cane and spending most of his time playing chess with the neighboring shopkeepers,” says the clerk.

‘The Jews are our brothers’

The description is remarkably accurate. A few doors down, Abdul sits beside his cane in the midst of a heated chess match. After losing the game, he directs his attention to a reporter. 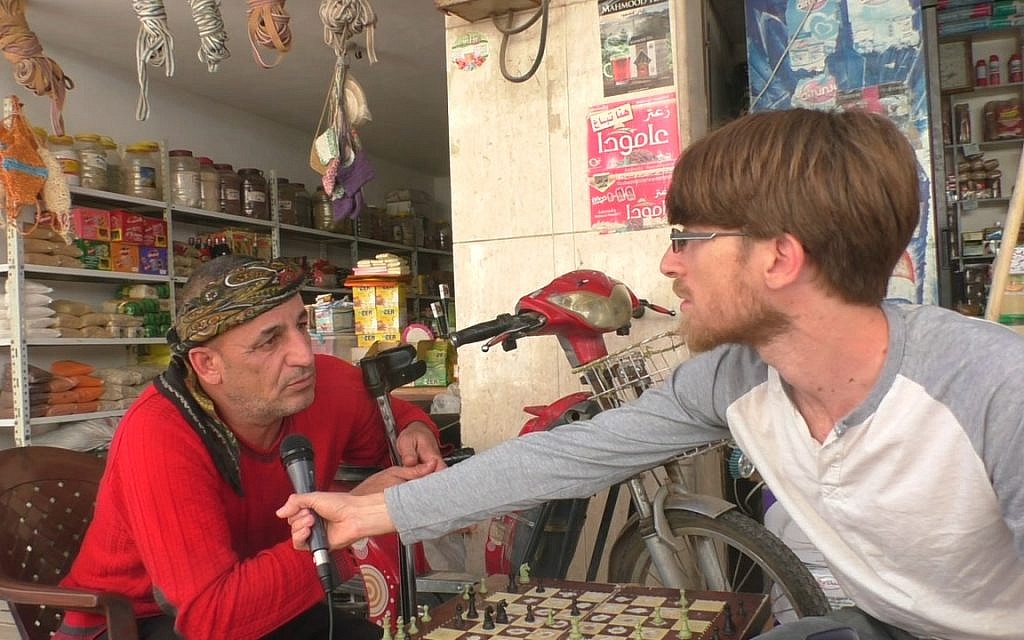 Abdul speaks about the Jews of Qamishli. (Ziv Genesove/ Times of Israel)

“I know the store, but to be honest I do not remember Ezra,” Abdul says. “But I do have a few memories of the time when the Jews were still living here. Those were good times, it’s a shame that everyone left.”

“Of course, the Jews are our brothers,” he says decisively when asked if Jews who wished to return would be welcomed. “They still have shops, houses, and property here — we’ll be happy if they come back.”

But Mustafa, a vendor from the neighboring shop who overhears the conversation, cannot help but invoke a slightly less rosy reality.

“I do not see a situation in which the Jews return to Qamishli,” Mustafa says.

“Although most of the residents would not have any problem if they do come, the situation here is still very tense,” he says. “Just a few months ago there was an ISIS attack here, and if the Jews return, they will become the number one target of all the radical Islamic organizations in Syria — and believe me, there are quite a few.” 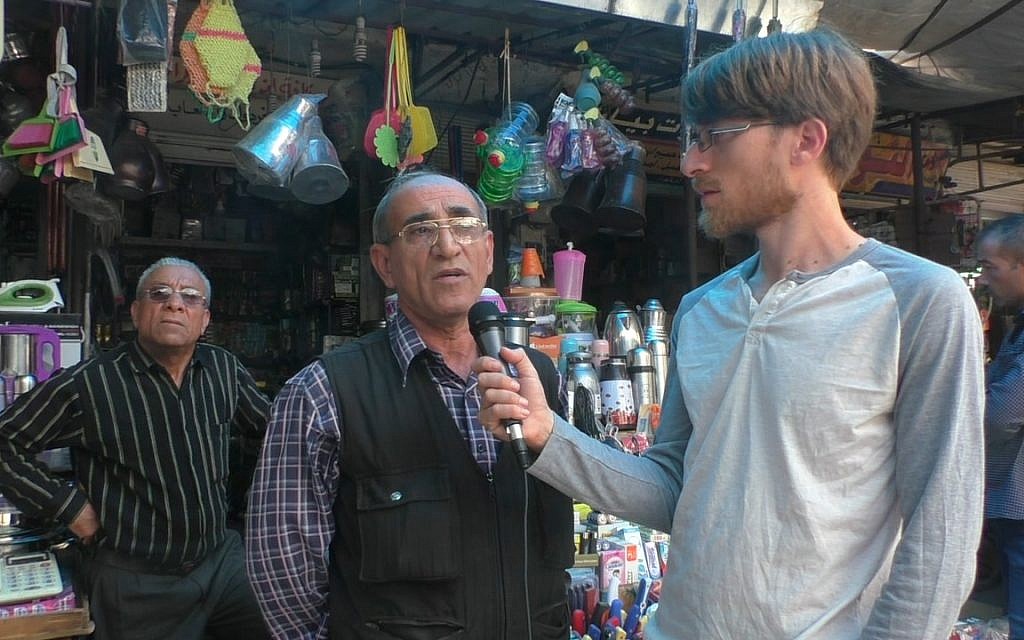 Mustafa hopes that the Jewish of Qamishli, Syria will be able to return once the radical Islamist factions are gone. (Ziv Genesove/ Times of Israel)

‘We aren’t looking for revenge’

The residents of Qamishli aren’t just tolerant of the Jews: the diverse population of the city includes Kurds, Arabs, Armenians, Turkmen, Assyrians and other minorities. They all maintain fairly good neighborly relations at a time when most of the country around them is disintegrating into enclaves based on religion and ethnic origin.

With the 2011 outbreak of the civil war in Syria, Bashar Assad was forced to transfer most of the troops located in the Kurdish region of Rojava to other areas where fiercer battles raged. The YPG, along with other Kurdish militias, took advantage of the opportunity to take over most of the territory in northeastern Syria and in 2012 declared Rojava an autonomous federation. 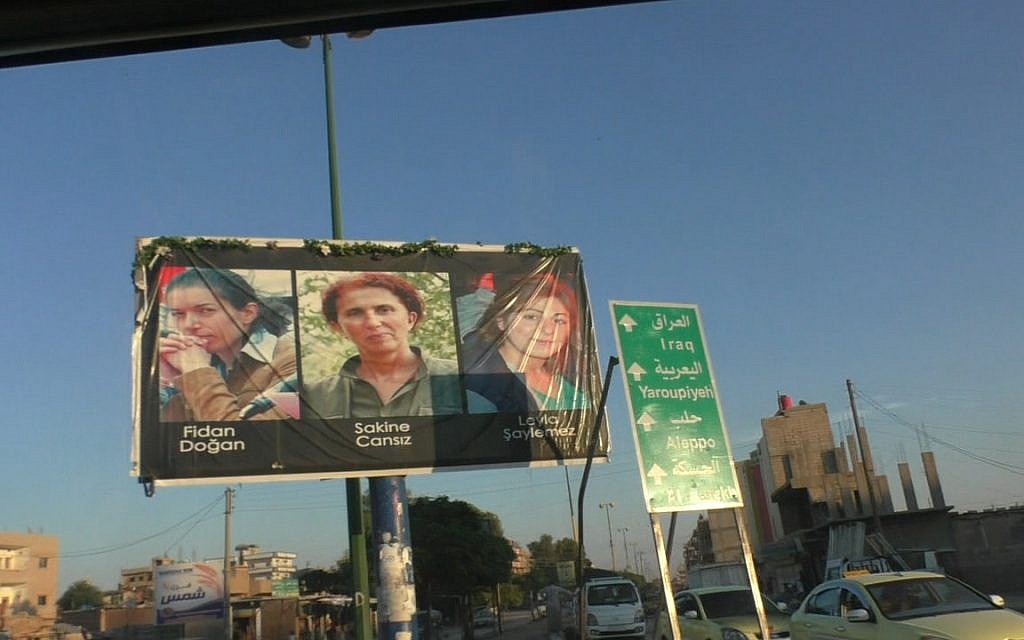 Today, the Syrian army still controls a number of neighborhoods in Qamishli and several strategic structures, including the airport. However, most of the city is under the authority of the Kurds, who maintain the status quo and try not to damage the fragile social fabric.

“When the Assad family controlled Qamishli, they imposed restrictions on minority populations and passed racist laws that benefited only the Arabs,” Mustafa says. “But today when the Kurds govern the area, you can see with your own eyes — Arabs, Kurds, and Assyrians sit together for a meal and a cup of coffee. We are not looking for revenge on anyone, just to live in peace.”

“Unfortunately, the war in Syria is not over yet,” Mustafa concludes, “but I hope that in the near future peace will return to the country, the extremist organizations will disappear, and maybe then the Jews could return to Syria. Inshallah.” 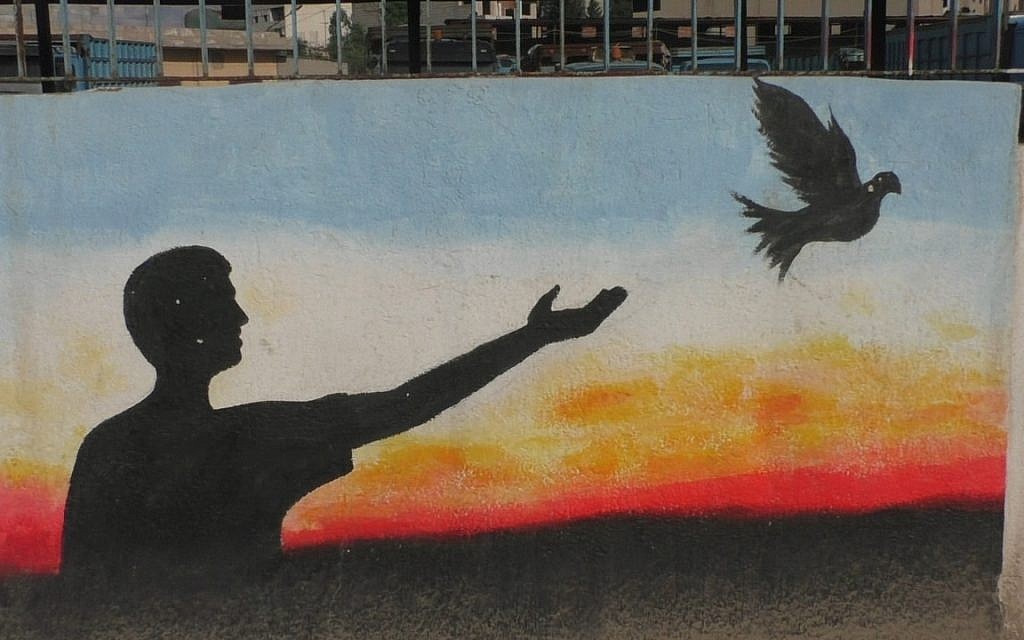 Graffiti of a dove in Qamishli, Syria. (Ziv Genesove/ Times of Israel)
Is our work important to you?