NEW YORK — Veteran US diplomat James Jeffrey has served at the pleasure of both Republican and Democratic presidents.

He was envoy to Albania and Turkey under George W. Bush and the top diplomat in Iraq under Barack Obama. The two presidents had radically different foreign policy agendas, particularly on the Middle East, with Obama ending the Iraq war that Bush had launched. But Jeffrey, a foreign service officer with over three decades of experience, was trusted by both and made the postings work.

Donald Trump, though, was initially a step too far.

This belief was what led Jeffrey to sign a letter prior to the 2016 election, along with dozens of other national security officials who served under Republican administrations, which declared that Trump was “not qualified to be president and commander-in-chief.”

But in August 2018, Secretary of State Mike Pompeo reached out to Jeffrey, asking him to serve as Special Representative for Syria Engagement. The journeyman diplomat answered the call, coming out of retirement to fill the role and later also taking on the title of Special Envoy to the Global Coalition To Defeat ISIS. 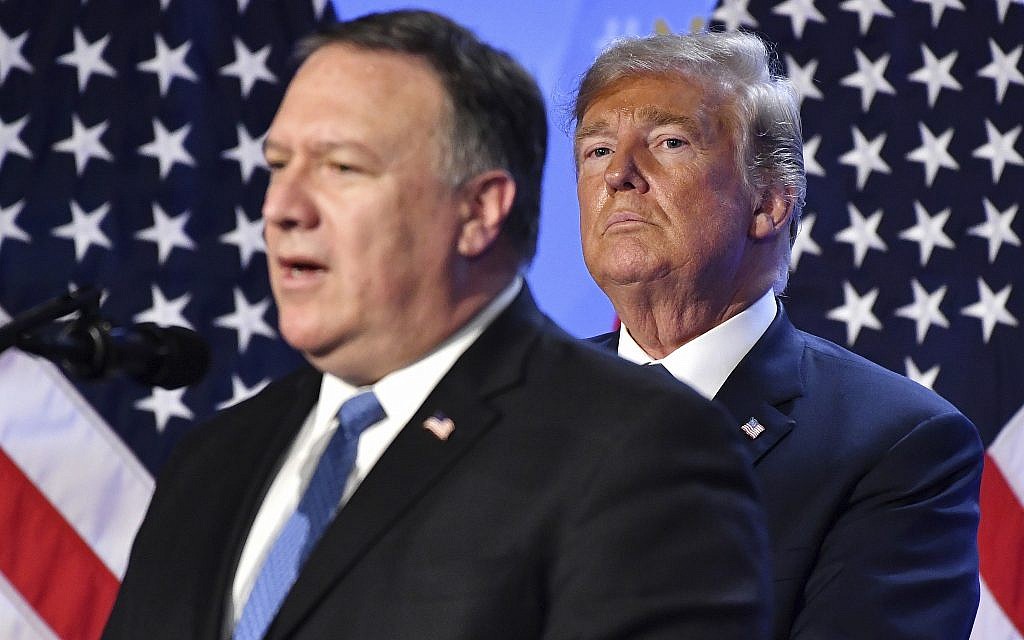 US President Donald Trump, right, listens to US Secretary of State Mike Pompeo during a press conference after a summit of heads of state and government at NATO headquarters in Brussels, Belgium, July 12, 2018. (Geert Vanden Wijngaert/AP)

Shortly after last month’s presidential election, the 74-year-old stepped down from those postings. Now, he is praising the policies of the president who, according to the letter he signed four years ago, he once believed would “risk our country’s national security and well-being.”

In a wide-ranging interview with The Times of Israel last week, Jeffrey said the Trump administration had managed to “devise a strategy to stop what appears to be a disastrous strategic loss of both Iraq and Syria to the forces of terror… in the Middle East.”

The ex-diplomat asserted that he and his colleagues were leaving the region in a better state than it was when Trump entered office, and that while it is falling into competent hands under President-elect Joe Biden, American allies in the region may come to miss the more polarizing, outgoing commander-in-chief.

The Trump administration was unable to achieve its three goals of a complete withdrawal of Iranian forces from Syria, the total defeat of the Islamic State and a political resolution in Syria, he said, but the US did manage to secure a “military stalemate” in the country that has denied gains to dictatorial president Bashar Assad. 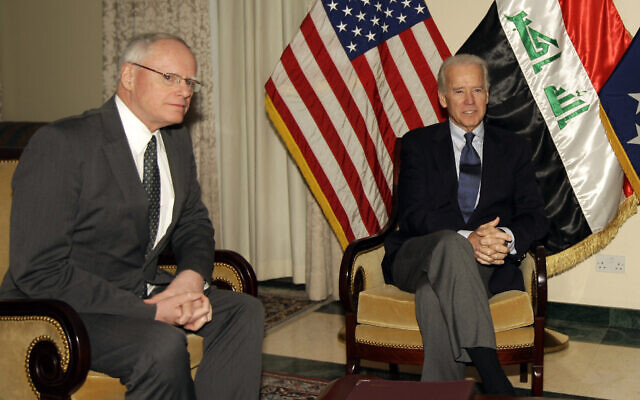 The former Syria envoy appeared careful at times not to give too much credit to Trump, instead lauding Pompeo for much of the administration’s policy in the Middle East.

Asked if he was pleasantly surprised by Trump’s performance as president, given the letter he signed ahead of the 2016 election and the praise he was now giving the administration’s policies, Jeffrey dodged.

“I was pleased very much to work with Mike Pompeo. I think he is a brilliant secretary of state… [who] had the faith and the trust of the president, and thus could talk [Trump] out of things and persuade the president of things,” he said.

Jeffrey specified that that trust was “certainly necessary” in convincing the president to walk back initial decisions to pull American troops entirely out of Syria.

“Several times it looked like we were withdrawing our forces. That would have been a terrible mistake. But in [all] three cases… President Trump correctly reversed himself and decided to keep forces on the ground,” he said. 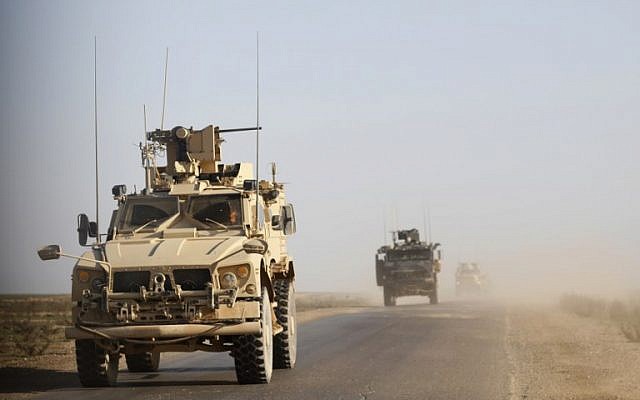 Trump last year abruptly announced that some 1,000 US troops were leaving northeast Syria where they had kept an uneasy peace between neighboring Turkey and Kurdish fighters, who had lost thousands as they led the Western-backed operation that crushed the Islamic State group.

Amid a wrath of criticism at home and abroad, the president went on to later say that a small number of troops would remain in southern Syria to secure the oil there. Israeli officials have expressed concern that an American withdrawal would create a power vacuum in the region, allowing Iran to expand its military entrenchment near the Israeli border.

Jeffrey made waves last month when he told the Defense One news site that he and others in the administration supportive of US presence in Syria were deliberately ambiguous in communications with senior Trump officials regarding the number of American troops in the area.

“We were always playing shell games to not make clear to our leadership how many troops we had there,” he said, adding that the number remaining in Syria was “a lot more than” the 200 troops Trump agreed to leave there. The actual figure of deployed soldiers is classified.

The longtime diplomat declined to comment further on the matter now, admitting that the remarks to Defense One had gotten him into “trouble,” as they were incorrectly interpreted to suggest people were deliberately passing false information to the president, which was never the case. 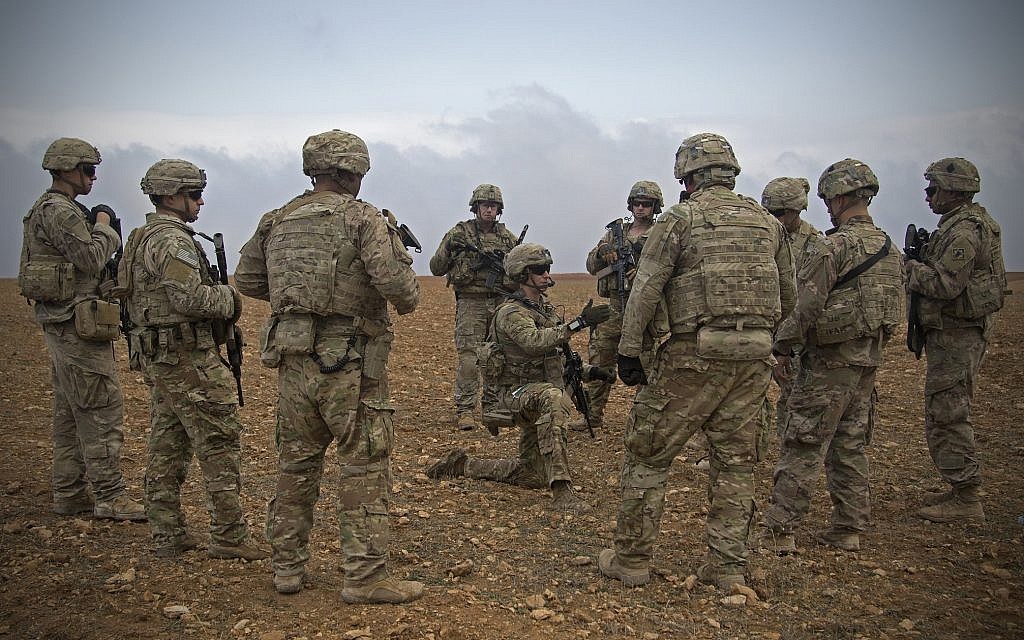 In this November 7, 2018, photo released by the US Army, US soldiers gather for a brief during a combined joint patrol rehearsal in Manbij, Syria (US Army photo by Spc. Zoe Garbarino via AP)

Sad to see him go

Despite apparent reservations with Trump’s instincts regarding Syria, Jeffrey was adamant that the president led a strong policy in the region overall.

“Look around the Middle East among America’s friends and partners in Ankara, Cairo, Jerusalem, Riyadh, Abu Dhabi, Doha, Kuwait City, Amman. Tell me anybody who’s happy to see the Trump administration go,” he said, pointing out that while the president may not have won over a majority of Americans, he had gained the respect of US allies in the Middle East.

“All of the front-line countries around the world were happy with what Trump actually did,” Jeffrey asserted.

He went on to flatly dismiss a common Democratic criticism that Trump had “trashed” traditional alliances. “What Trump did was trash the intellectual and political elite in parts of Western Europe whose major contribution to global security in the last two decades was to give Barack Obama the Nobel Peace Prize [in 2009] before he did anything,” he said. “You know why? Because he sounded like them.” 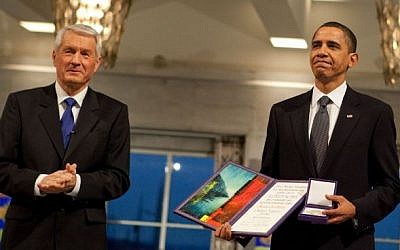 On the other hand, the ex-Syria envoy clarified that leaders in the Middle East and around the world “know and trust” Biden and the officials slated to work alongside him. Jeffrey described the team Biden has nominated thus far as “reassuring.”

Jeffrey predicted a “continuity of America’s management of a global collective security system” and said a likely change in “tone” from the Biden administration would improve US relations with countries such as Canada, Germany France and other NATO allies, which are crucial in imposing sanctions against US adversaries.

Jeffrey leaves his post with the Syrian civil war nearing its 10th year, the death toll there in the hundreds of thousands and Assad no closer to ceding power.

“But what we have done is stop Assad’s forward movement militarily,” he said. “There is a basic military stalemate.”

Jeffrey pointed to US and coalition forces in the country who are not only fighting the Islamic State but also denying terrain to Assad. Turkish forces are doing the same in northern Syria while “the Israeli Air force dominates the skies.”

Israel in recent years has carried out hundreds of airstrikes in Syria against what it says are Iranian targets. 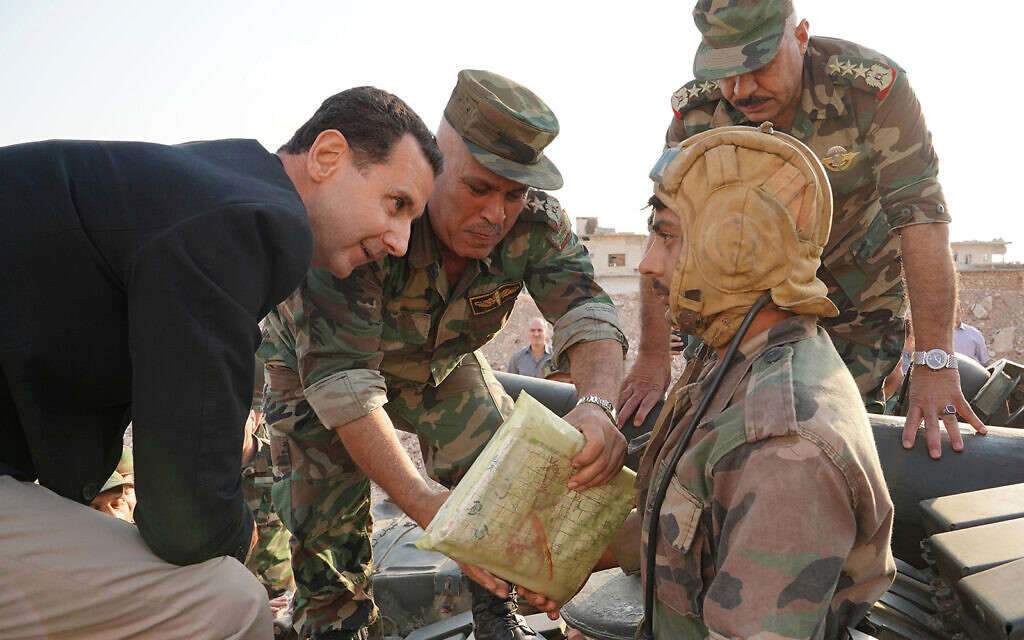 Moreover, Jeffrey pointed to the broad coalition and the support of international organizations at the UN and the EU, which levy sanctions that have “crushed Assad economically,” along with cooperation from Arab League members that have agreed to maintain the Syrian government’s diplomatic isolation.

“What this means is essentially Russia and Iran have inherited a totally failed state in a state of quagmire,” he said. “If they want to get out of this, they’re going to have to negotiate seriously and accept compromises.”

The challenge for the Biden administration, Jeffrey said, would be to convince Russia and Iran to accept compromises that will put an end to bloodshed in Syria and “bring their creature Assad under control” amid the two countries’ “growing reluctance” to do so.

Jeffrey defended the Trump administration’s policy of boycotting Assad, saying it was a continuation of Obama’s stance. The former president shifted away in 2015 from backing regime change to a UN Security Council-endorsed political solution to the conflict that left the door open for the Syrian president to remain. 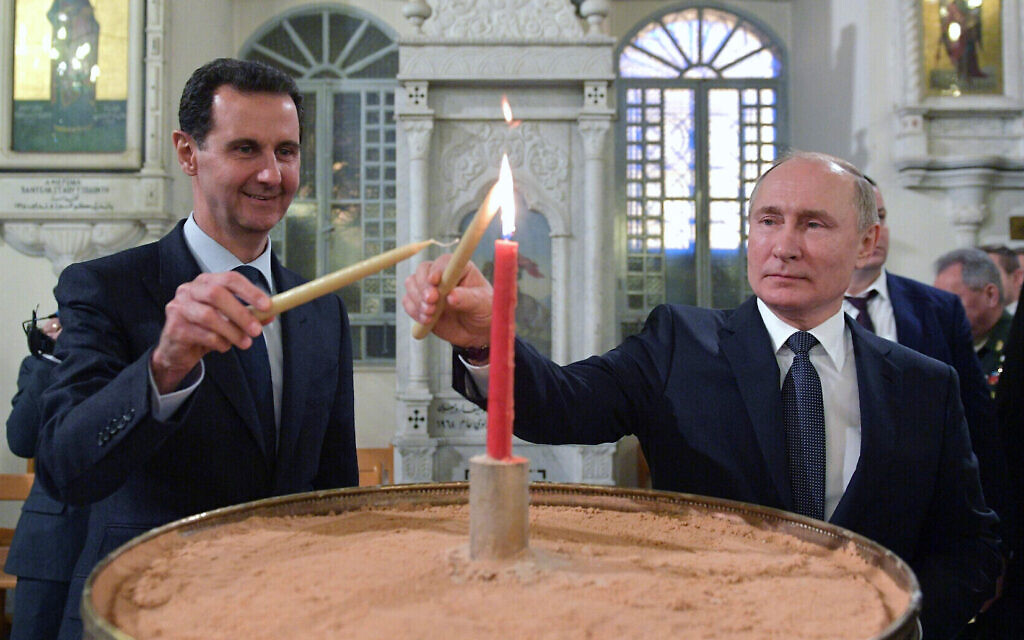 “If Assad wakes up and decides to embrace that [solution], then we will work with Assad,” he said.

Jeffrey argued that a boycott of Assad is justified, even though the US has been willing to negotiate with human rights abusers Iran and North Korea. In the case of the latter two countries, the ex-envoy argued that “it made sense to negotiate with them” and progress was made in certain areas, whereas with Assad “there was no indication whatsoever” that he would be willing to “yield an inch.”

Jeffrey defended Israeli strikes in Syria, saying the only way to get the IAF out of Syrian skies would be for Russia and Assad to extract Iranian and Iranian-backed forces from the war-torn country.

He called that a “non-negotiable demand,” insisting that Iran’s involvement in Syria “magnifies and multiplies the very worst instincts of Assad vis-à-vis his own population and his neighbors.

“Secondly, it poses an existential risk right now, potentially to Israel and in the future, to our other friends and allies around Syria — Turkey, Jordan, Iraq,” Jeffrey said.

While the former ambassador lamented the inability to remove Iran from Syria, he asserted that US policy had inflicted a very high price on the Assad regime “and indirectly by what we’re doing, by what Israel is doing, by what our various other partners are doing, [we have] reduced very dramatically Iran’s benefits from being in Syria.” 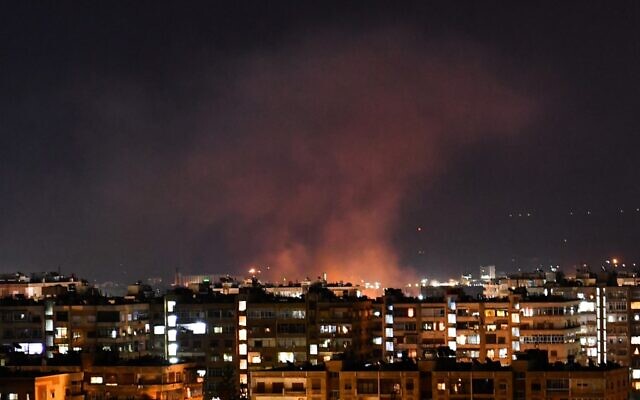 If the US is not able to negotiate a compromise that includes a removal of Iran from Syria, “the interim strategy is to deny them a victory,” Jeffrey explained.

As for supposed Israeli airstrikes against Iranian-linked forces in Iraq, the ex-envoy acknowledged that there had been “concern” among some in the US military that such strikes would cause problems for coinciding efforts to defeat the Islamic State there.

He said the issue was debated in the Trump administration, but “we ultimately decided that those concerns were overblown.”

“We have carried out various operations in Syria and Iraq against Iranian and Syrian forces, and they have not impacted our mission against [Islamic State].”

On Israel’s contribution to the fight against IS, Jeffrey said, “Israel has played a huge role. Much of it is classified.”