That minuscule sliver of time is essentially what kept Israel’s bobsled team from qualifying – for what would have been the first time ever – for the 2022 Winter Olympics in Beijing.

After months of training, competing, hoping and praying, the team ultimately finished just one spot short of qualification for next month’s Olympic Games. But despite the heartbreaking defeat, the team’s physical and spiritual driving force, Adam “AJ” Edelman – who represented Israel in skeleton at the 2018 Games – has no intention of giving up.

“It was 0.2 seconds, and that’s the blink of an eye,” Edelman, 30, told The Times of Israel in an interview a day after getting the news that the team did not make the cut. “That’s tough… so it’s very difficult not to feel quite disappointed.”

Instead of preparing to head to Beijing, Edelman – a religiously observant native of Boston – is back in the US, looking for a place to live and a job and aiming to finish up his MBA at Yale. But his mind is already looking four years ahead – to the next Olympic Games, in Milan.

“This mission is not done, and this mission really needs to be completed,” he said. “I’m just motivated to make this thing work for 2026. So I’m already putting the plans in place.” 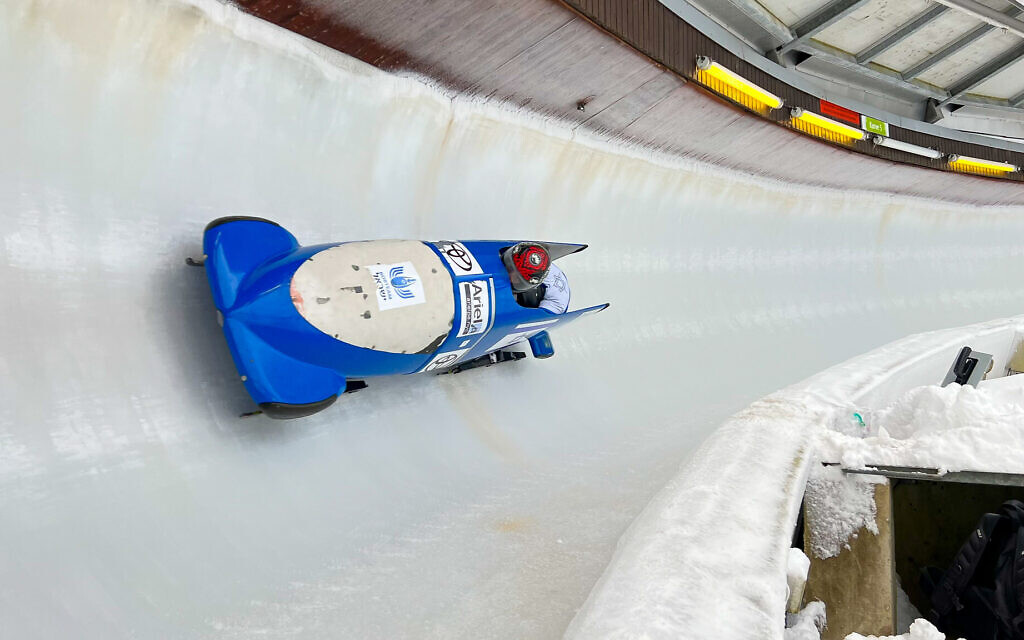 Nobody could accuse Edelman of not having an eye on the long-term goal. Back in 2014, shortly after graduating from MIT, he decided to compete for Israel at the 2014 North American Cup in skeleton, a sport he had virtually no experience in. Despite a series of early failures, and no small amount of discouragement, Edelman refused to give up on his goal of becoming Israel’s first-ever Olympic skeleton athlete.

After months of training, competing, hoping and praying, the team finished one heartbreaking spot short of qualification

And he accomplished that dream in 2018 as Israel’s first Olympic competitor in any sliding sport (bobsled, skeleton and luge). Following the Pyeongchang Games, Edelman set himself a new goal: getting Israel to the Olympics in bobsled, with himself in the pilot seat. Despite his Herculean efforts, neither Israel’s two-man or four-man bobsled teams were able to clinch a spot.

With the team not qualifying for this year’s games, Israel’s delegation to the Beijing Olympics will be a small one, with just six athletes compared to the record 10 who competed four years ago, and a fraction of the 90 that participated in the Tokyo Summer Olympics last year. 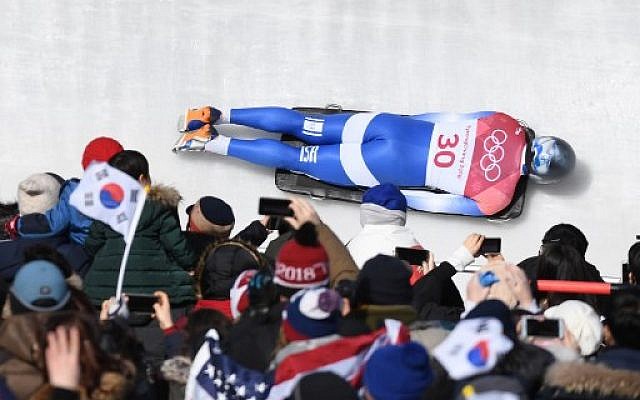 Edelman’s groundbreaking turn at the 2018 Winter Games opened up the Israeli sliding sports field to more athletes who had also set their sights on the 2022 Olympics. But when the final qualification rounds came to a close last week, none had managed to slide their way into an Olympic spot.

British-Israeli Georgina Cohen was forced to withdraw from skeleton contention after suffering a concussion during a crash earlier this month. And American-Israeli skeleton athlete Jared Firestone fell just three spots short of qualification.

“Not making the Olympics is disappointing,” Firestone wrote on Instagram last week. “But luckily for me, I can still call the past 3 seasons a major success… [because] my ultimate goal was to use the platform I would have as an Israeli athlete to influence people to support Israel, and to be a positive ambassador for the Jewish people.”

‘We want to become a tradition’

Though Israel made its Olympic skeleton debut in 2018, it would likely surprise most Israelis that the country’s Bobsled and Skeleton Federation has already been around for 20 years. That federation, known as Bobsleigh Skeleton Israel, is run by its president, David Greaves, and secretary-general Larry Sidney, both former sliding athletes. 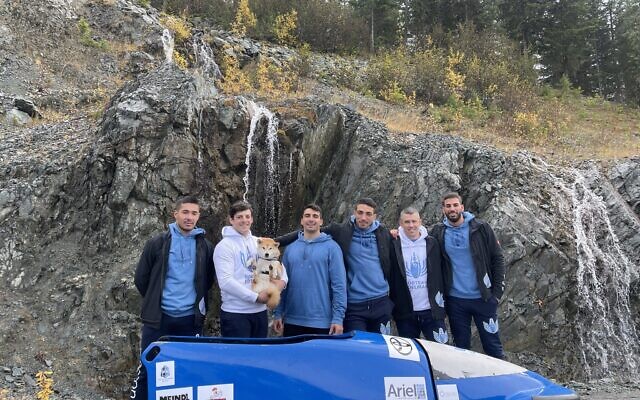 “We have been running this program for 20 years, and we have been recognized by the Israeli Olympic Committee for the last seven years as an Olympic sport,” Greaves told the Times of Israel in an interview from Canada earlier this month. “We’re connected to the sport infrastructure… we’re committed to continuing the program.”

And for just as long, said Greaves, he’s been hearing the jokes comparing Israel to the Jamaican bobsled team immortalized in the 1993 film “Cool Runnings.”

“We’ve been hearing it for 20 years,” he said. “Let me just say this about the Jamaican bobsled program. They popularized this sport in a way that it would have been impossible for it to be this popular or well known if it wasn’t for the Jamaicans.”

Greaves said that following Edelman’s 2018 debut, the question on the mind of Israeli Olympic officials was: “Will you become a tradition? Will it be something that the Israelis on the committee have an expectation of every four years at the Winter Games – that we have a viable shot at representing Israel in the sliding sports?” he said. “And that has been the focus of my drive as the administrator, that I don’t want to be a one-Olympic wonder as a federation. We want to become a tradition… we want to be part of the conversation every four years.” 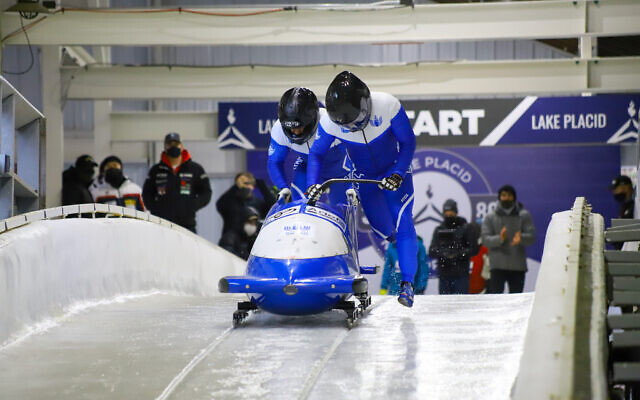 While Israel is obviously not known for its winter sports or winter climate, when it comes to bobsled and skeleton, said Greaves, many other competing countries have similar disadvantages.

“The reality is there are about 12 or 13 active tracks facilities in the world,” said Greaves, noting that they are most concentrated in Germany, the US and Canada. “There are really only about 10 countries that actually have the facilities. So every other country that competes – and there’s about 65 or 70 countries that compete in the sliding sports – they’re in the same situation as Israel in terms of facilities. Whether you’re a winter country or not, you don’t just have a bobsled track, it’s not like an ice skating rink.”

The number one thing standing in the team’s way, said Edelman, was a persistent lack of funding in a particularly expensive sport.

“If we would have made it [to the Olympics], we would have been by far the least-funded team,” he said. “We just need someone to step up to the plate, and it’s kind of weird to me, if I’ll be honest, it’s very weird to me how difficult it’s been to find someone to support what can be such an amazing accomplishment for Israel, and set up a generation of inspiration.”

Edelman said he spent practically every penny he had keeping the team and its Olympic dream alive, and he believes an Olympic spot would have been easily clinched if their efforts were fully funded. 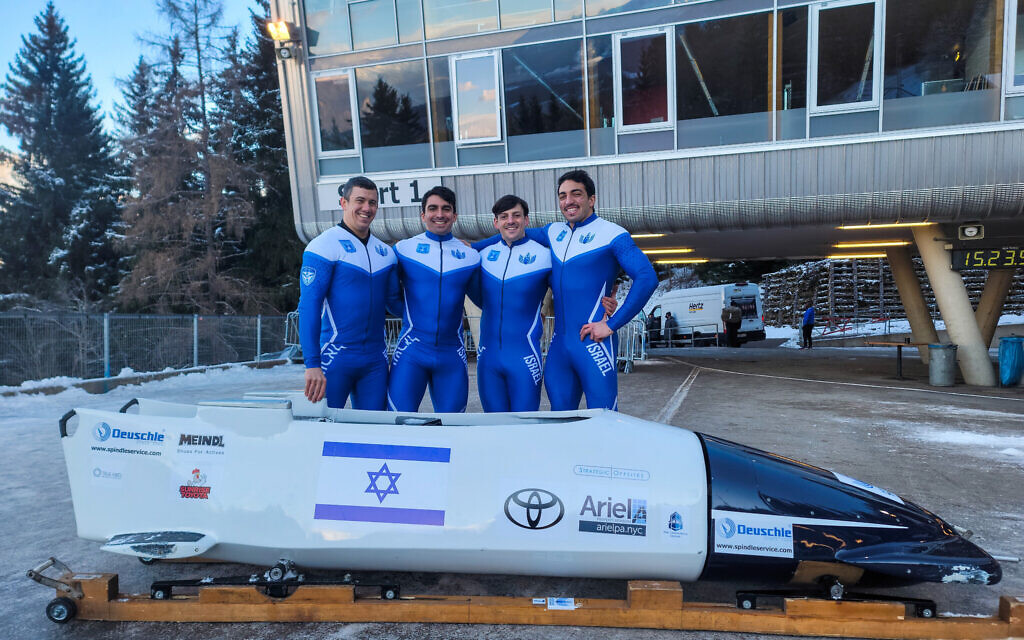 “We were ahead of Jamaica — which made it in four-man [bobsled] — until the middle of the season, when they bought a brand new sled and just womped us afterwards,” said Edelman. The other members of the Israeli team, he said, “had one-and-a-half months of lead time, and the only reason they had one-and-a-half months’ lead time as opposed to five months like other teams, or a year… is because I couldn’t fund them. I couldn’t fund bringing them over for five months.”

Edelman said he has appealed to a variety of prominent philanthropists and sports team owners seeking to drum up support, but has largely left emptyhanded.

We just need someone to step up to the plate… It’s very weird to me how difficult it’s been to find someone to support what can be such an amazing accomplishment for Israel, and set up a generation of inspiration

“Why does no one want to take a chance? It’s because no one’s done it before,” he said. “And that’s the problem, no one’s done it before. So no one believes in it. And I can’t accept that.” The Olympic athlete said he believes that “my mission, my purpose in life, is to advance Israel in ways others won’t or can’t. And in this case, it’s a won’t issue.”

Unlike skeleton, bobsled is a team effort, and while Edelman was the only pilot, he was backed up by a diverse crew consisting of Amitay Tzemach, Menachem Chen, Roman Shargaev, Amit Haas and Ward Fawarseh.

At the end of the day, he said, the team came within a split second of an Olympic qualification, despite having all the odds stacked against them.

“Israel did this, they came within the snap of a finger against the best of the best, with nothing, with just sheer willpower and pride and heart,” he said. “And I hope people see that and basically say, you know, what were they missing? And the thing we were missing was resources.”