By early in the morning of April 10, in the predawn hours after the polls had closed in our previous elections, both Benjamin Netanyahu and Benny Gantz had delivered victory speeches to their ecstatic supporters. Both, it turned out, had jumped the gun. Israel’s voters, the actual results would soon show, had not given Gantz a realistic shot at forming a coalition. And Netanyahu, who for weeks after polling day credibly believed he would muster a majority, wound up short when his longtime ally-turned-nemesis Avigdor Liberman abandoned him.

By early in the morning of September 18, in the predawn hours after the polls had closed in our consequent election re-run, both Netanyahu and Gantz had delivered speeches to their supporters, but neither was claiming victory this time. Lessons had evidently been learned. Indeed, a narrow look at the predicted election results gave neither leader particular cause for celebration. Both Likud and Blue and White were seen to have lost a little of their Knesset weight.

Yet while a hoarse, exhausted, and patently hugely disappointed Netanyahu struggled through his address — battling, of all things, against an infuriatingly supportive heckler, who continuously interrupted his remarks with professions of love for the prime minister, his wife and their endeavors on behalf of the State of Israel — Gantz, his fellow party leaders and their adherents were in celebratory mood. While Netanyahu was taking pains to assure his crowd that he was not going anywhere, that he would continue to protect Israel, and that he was determined to block an anti-Zionist government reliant on the backing of Arab parties, Gantz was cautiously casting his gaze toward the prime ministership.

What did the people want?

Voting nine parties with wildly diverse agendas into the 120-member Knesset, the Israeli electorate — which turned out to be anything but indifferent to our second round of elections in five months — bequeathed its politicians a dizzying array of possibilities, and a potentially straightforward path to our next government. Both Netanyahu and Gantz spoke of unity, and a partnership dominated by their two parties would easily command a Knesset majority, but neither mentioned the other by name. In the run-up to polling day, Gantz made clear that he will not partner in government with a Likud led by Netanyahu, who faces imminent indictment for corruption. And Netanyahu relentlessly denounced Gantz as a weak leftist under whose leadership Israel would be in peril.

While a Blue and White-Likud partnership is numerically straightforward, it would be a mistake to assert that this was the will of the people. Rather, the Israeli electorate has spoken in its many voices, reflecting its wide and often conflicting priorities and concerns.

The boy and man who cried wolf

The Arab parties, four very different factions running together as the Joint List, appear to have done extraordinarily well. Netanyahu’s attempts through recent years to denounce the Arab electorate and its leadership, and to suppress the vote by deploying partisan observers with cameras at their polling stations, would appear to have backfired spectacularly.

So intent was his son Yair to dishonestly whip up fears of a large Arab turnout on Tuesday that he tweeted a photograph showing long lines of Arab voters… in Turkey. It evidently didn’t occur to the prime minister’s son that there might be long lines of Arab voters, actual long lines, of actual Arab voters, forming at polling stations in Israel. Where the Arab sector is concerned, Yair and Benjamin Netanyahu, with their constant diatribe against the droves of Arabs flowing to the polls, are apparently the boy and man who cried wolf.

And for Liberman himself, the gamble of depriving Netanyahu of a coalition last time seems to have paid off handsomely. The king-breaker in April, he is a much stronger force this time.

The ultra-Orthodox used to hold the balance of power between left and right, but both Shas and United Torah Judaism had lately thrown in their lot utterly with Netanyahu. Israeli politics evidently abhors a vacuum; Liberman has filled it.

Unmoved by the PM’s desperation

Most striking, of course, is the decline in Likud’s fortunes, down several seats from the 35 plus 4 (Kulanu) it won last time.

Netanyahu commandeered an indulgent media even as he denounced it, winning wildly disproportionate airtime even on supposedly independent outlets, battering viewers and listeners with the entreaty that they ‘vote Likud.’ Not enough of them did so

He promised the settler movement the earth — or, rather, an annexed 25 percent of the West Bank in the Jordan Valley area, all the settlements and other unstated “vital areas” beyond. And yet Likud support fell, and the pro-settler Yamina alliance hardly flew.

He commandeered an indulgent media even as he denounced it, winning wildly disproportionate airtime even on supposedly independent outlets such as Channel 12 and Army Radio, battering viewers and listeners with the entreaty that they “vote Likud.” Not enough of them did so.

Apparently, when all the potential calculations are done, not enough voters were persuaded that, after 10 consecutive years in office, and another three in the 1990s besides, Israel would be lost without Netanyahu at its helm. 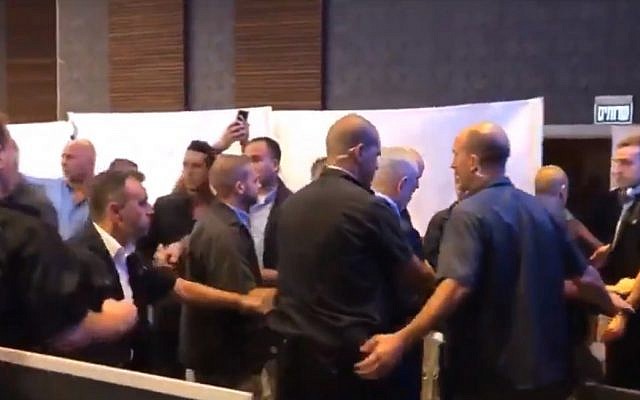 Prime Minister Benjamin Netanyahu, center, being moved away from a campaign event stage while surrounded by security as rockets are shot at Ashdod on September 10, 2019. (screen capture: Twitter)

Apparently, when all the alliances and potential alliances are considered, not enough Israelis were persuaded that Israel might be more vulnerable to its external enemies under a leadership including ex-IDF chiefs of staff Gantz, Moshe Ya’alon and Gabi Ashkenazi. One wonders whether last Tuesday’s scenes of Netanyahu forced offstage at his own campaign rally in Ashdod under rocket fire from Gaza’s terrorists — “Mr. Security” compelled to take cover — were a factor in that.

Apparently, Gantz’s disinclination to fight dirty on the campaign trail, his rather old-fashioned bearing at the microphone, his hesitancy and discomfort in the studios, and his occasional linguistic slips, were not fatal to his political cause. (One TV exchange began: Interviewer: “How are you?”; Gantz: “My name is good.”) 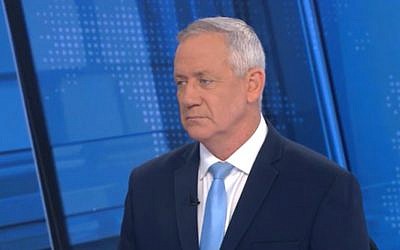 Apparently, when all the permutations are taken into account, enough Israelis sought a greater internal harmony and fewer Netanyahu-led attacks on the left, the Arabs, the media, the cops, the state prosecution, the judges.

Tuesday’s elections were no overwhelming endorsement of a prime minister Gantz. But, bottom line, they indicated that enough Israelis are unfazed by the prospect of political life after Netanyahu.

Many options, none of them good

Netanyahu’s address in the early hours of Wednesday was neither a victory speech nor a concession. It was a holding action, as he awaits the final results and considers his next steps.

Should he seek to contest the results, claiming that the Arab voter fraud he warned against had come to pass and that, as he had warned, the elections were stolen?

Should he seek to contest the results, claiming that the Arab voter fraud he warned against had come to pass and that, as he had warned, the elections were stolen? Should he announce a timeout, as Gantz has long urged, to fight the legal allegations against him, with the aim of proving his innocence and even making an eventual return? Should he seek to somehow bend these unsatisfactory election results to his formidable will? 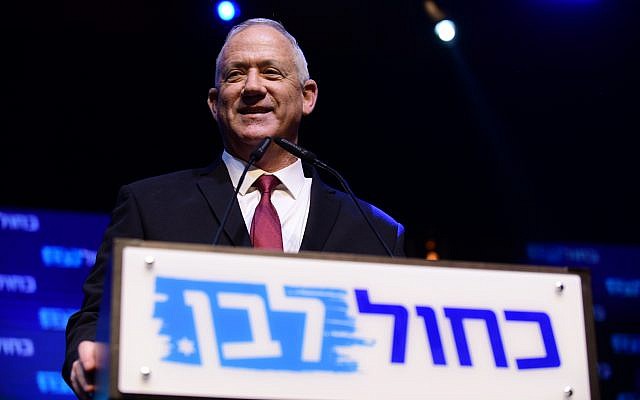 Netanyahu turns 70 next month. Among the clearer consequences of these complex elections is that he would seem to have run out of time to build himself an immunity shield against his looming prosecution.

He hasn’t yet been abandoned by his own party, unlike that other decade-long prime ministerial force of nature Margaret Thatcher, who had also sought to go on and on and on. He remains a potent force at the heart of Israeli politics, and he could immensely complicate our political reality for weeks or even months to come. He still has some political options. 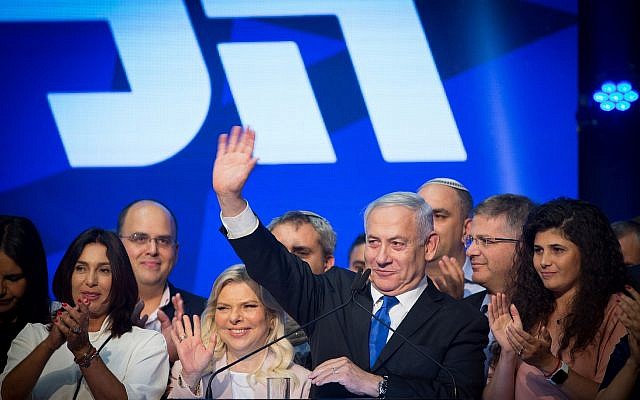 Prime Minister Benjamin Netanyahu speaks to Likud supporters in Tel Aviv, early in the morning of September 18, 2019, after elections the previous day. (Miriam Alster/Flash90)
Is our work important to you?