In November 2015, a newspaper in the United Arab Emirates dedicated a long editorial to the European Union’s newly issued guidelines about special labels for products from Israeli settlements.

“The decision by the 28-nation bloc has come after months of procrastination, but evidently underscores the bloc’s anger over Israel’s continued expansion of settlements on territory that Palestinians seek for their future state,” Gulf Today wrote at the time, calling for sanctions against the Jewish state. “Inaction on the part of the world community would be deemed by Israel as support for its oppressive actions.”

Four years later, after the European Court of Justice ruled that products made in Israeli settlements must be labeled as such, the Sharjah-based daily ran another editorial about the issue, hailing the judges’ “appropriate and welcome decision.”

Blind support by the US administration “has emboldened Israel to embark on a dangerous path,” the paper went on. The November 12, 2019, article ended with a call for all European countries to “implement what is a legal and political obligation regarding labeling of products.”

Fast forward 12 months. Israel and the UAE have signed the so-called Abraham Accords, quickly establishing diplomatic ties and vibrant trade relations. Emirati supermarkets proudly display Israeli products, apparently including some made in Israeli settlements — but no one is talking about labeling.

In this new era of peace, the idea of distinguishing between goods from Israel proper and those that come from areas Israel gained control over in 1967 is no longer in vogue in the Arab Gulf.

On Monday, Tura Winery, which is based in the West Bank settlement of Rehelim but proudly labels its products as being “from the Land of Israel,” inked a deal with Dubai-based FAM Holding.

“Now it can be revealed: We signed a special cooperation agreement on the distribution of Tura wines and [olive] oil across the UAE,” the company wrote on its Facebook page, together with several pictures of co-owner Vered Ben Sa’adon shaking hands with her new business partner at the signing ceremony in Dubai. “Straight from Rechelim in Israel to the UAE — history!”

Speaking to The Times of Israel on Tuesday from Dubai, where she said she was about to secure additional deals, Ben Sa’adon said that not one of her many interlocutors in the Emirati business sector had brought up the issue of labeling.

“I didn’t encounter any opposition whatsoever,” she said. “Everyone called us cousins or brothers, and really treated us like family.”

While she hasn’t spoken to UAE government officials, she said many of the people she met in Dubai were actually proud of doing business with her and see her work as one of connecting people.

“In addition to the business aspect, I am hopeful that this will bring a new era of hope. If we work together, the sky’s the limit,” she said. 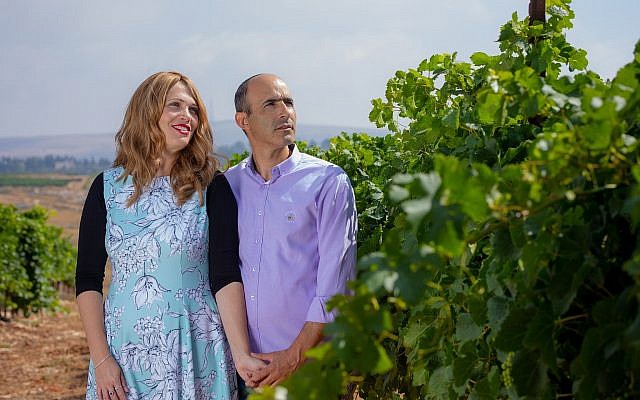 Vered and Erez Ben Sa’adon in a vineyard of Tura Winery, which they founded in 2003 in the West Bank settlement of Rehelim (courtesy Tura Winery)

The Samaria Regional Council, in the heart of the West Bank, which helped broker the deal, celebrated “a national-strategic achievement for the State of Israel.”

The agreement with FAM Holding is a “significant part of a strategic process to strengthen Samaria — in the number of residents, in infrastructure and culture,” the council’s head, Yossi Dagan, wrote on Facebook Monday. “We’re working hard, consistently, and in any location, to turn Samaria into an economic powerhouse — another glass ceiling shattered!”

Dagan had led a first settler delegation to the UAE in mid-November, holding “marathon business meetings” with around 20 individuals and companies working in agriculture, pest control and plastics.

The labeling of products from areas most of the international community does not recognize as Israeli territory has long been a contentious issue. Foreign diplomats argue that it is misleading to state that a product is from Israel when it really originated in areas even the Israeli government does not consider sovereign territory.

But pro-Israel advocates say Israeli settlers are unfairly singled out when products from no other disputed area elsewhere in the world are subject to a labeling regime, which, they insist, violates international trade agreements.

United Nations Security Council resolution 2334 calls on all countries to “distinguish, in their relevant dealings, between the territory of the State of Israel and the territories occupied since 1967.” But as opposed to, for instance, the EU and all its member states, the UAE and Bahrain — another Gulf country that normalized relations with Israel this year — do not appear to pay much attention to this requirement.

The head of Dubai’s Chamber of Commerce and Industry, Hamad Buamim, said this week that he sees no problems with importing Israeli goods produced in settlements, arguing that such trade ultimately benefits Palestinians employed in West Bank factories.

“We are an open market in every sense of the word, and that means the broader the trade is and the more it is able to help various populations in the region, the better,” Buamim told Israel’s Globes newspaper. 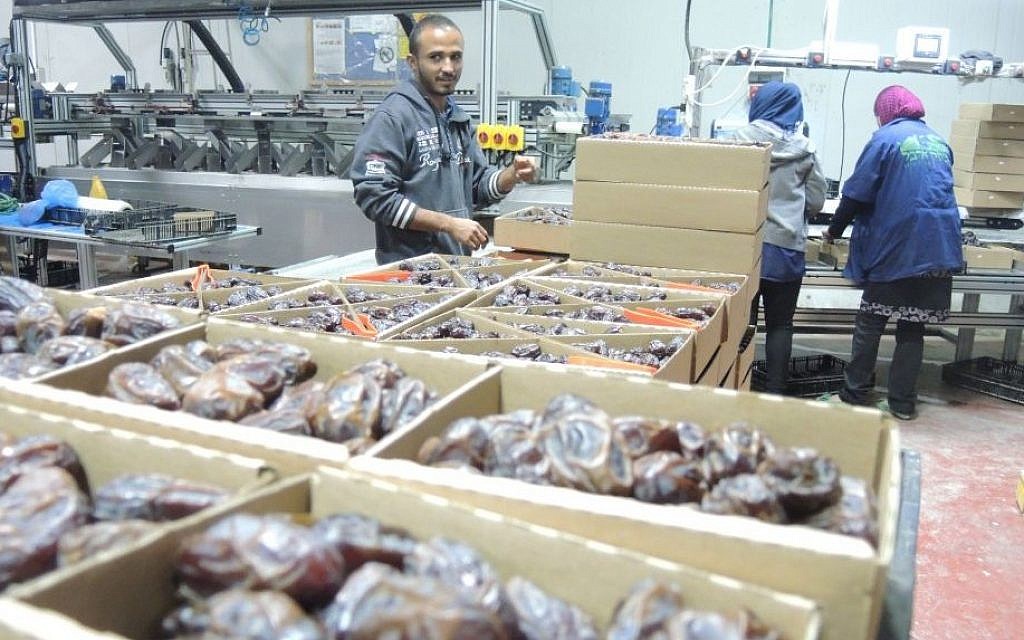 Illustrative: Palestinian workers on November 11, 2015, at a date packaging factory in the Jordan Valley in the West Bank. This produce will be labeled if exported to the EU as ‘Product of the West Bank (Israeli settlement’ (Melanie Lidman/Times of Israel)

Jerusalem’s normalization treaties with Abu Dhabi and Manama do not have a territorial dimension — they merely speak of the State of Israel, without any reference to the 1967 lines. According to several officials familiar with the issue, authorities in the UAE and Bahrain did not raise it at all in their engagements with Israeli interlocutors.

According to Eugene Kontorovich, the director of the Center for the Middle East and International Law at George Mason University Law School, the non-labeling policies of the UAE and Bahrain are actually the norm.

“The kind of territorial exclusions the EU insists on putting in its agreements are the exception, not the rule,” he said. “Such clauses are not required by international law, and have almost no support in state practice — indeed, the EU does not even insist on such clauses with other countries it regards as occupying powers.”

It’s not just the West Bank. In late October, the Golan Heights Winery, based in Katzrin, made headlines when it announced that it had signed an agreement with UAE’s African+Eastern alcohol importer for the distribution of its wines.

According to a press release issued by the winery, its products would be made available in Dubai and Abu Dhabi by early November. But a cursory search on the A+E website this week showed no wines from Israel, including the Golan.

‘It’s not something that’s weighing on their mind’

“The Abraham Accords were designed to prioritize cooperation and set the stage for strategic synergies while distancing issues commonly associated with politically driven conflict,” said Avi Zimmerman, who founded and heads the Judea and Samaria Chamber of Commerce and Industry. “As such, all Israeli-registered companies are accounted for in the Abraham Accords.”

All products from the West Bank are welcome in the UAE and Bahrain, he asserted.

In fact, products manufactured in the West Bank found their way to the Gulf even before the Abraham Accords were signed, he said. “They’re already there. Some is tech. Some is industrial.”

In the “spirit of synergy,” the chamber of commerce he heads is currently trying to “find opportunities for Palestinian businesses to benefit from the accords as well, in the short term through partnerships with Israeli businesses and in the long term through large-scale environmental and infrastructure projects that incorporate both populations,” he added.

If the Gulf states are really interested in trading even with Israeli settlers, officials there are still uneasy talking about it. The UAE Foreign Ministry declined to comment for this article.

Bahrain’s Minister of Industry, Commerce and Tourism Zayed bin Rashid Al Zayani, during a visit to Israel last week, said that all goods and services offered by Israelis will be treated as products of Israel, indicating that even goods from the West Bank and the Golan will not require special labels.

When asked by The Times of Israel if goods from settlements were welcome in Bahrain and can be marketed as “products of Israel,” Al Zayani responded in the affirmative.

“I don’t see, frankly, a distinction on which part or which city or which region it was manufactured or sourced from,” Al Zayani said. 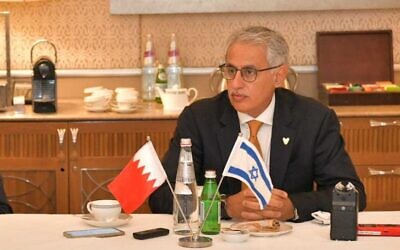 His comments triggered criticism from Palestinian officials and anti-Israel activists, and Bahrain backtracked a short while later.

The state-run Bahrain News Agency quoted an “official source” in the ministry denying Al Zayani’s statement. The source reiterated Manama’s “unwavering stance regarding adherence to the resolutions of the United Nations, the Arab League and the Organisation of Islamic Cooperation concerning the Israeli settlements in the West Bank and the Syrian Golan Heights.”

Fleur Hassan-Nahoum, a deputy mayor of Jerusalem and the co-founder of the UAE-Israel Business Council, said that she had encountered “absolutely zero concerns or questions about where things are coming from” during her recent trip to the Emirates.

“They are not really concerned by that, or they haven’t really thought about that. Certainly it’s not something that’s weighing on their mind,” she told The Times of Israel in an interview.

“There is concern for the wellbeing of the Palestinians in general. They do care about them,” she allowed, stressing that she has been telling her interlocutors in the Gulf that boosting the economy in East Jerusalem and the West Bank actually helps Palestinian workers.

“It makes total sense to business. They’re the biggest champions of market economy that I’ve ever experienced anywhere, and so whatever is good for providing jobs and opportunities, that’s what they believe in.” 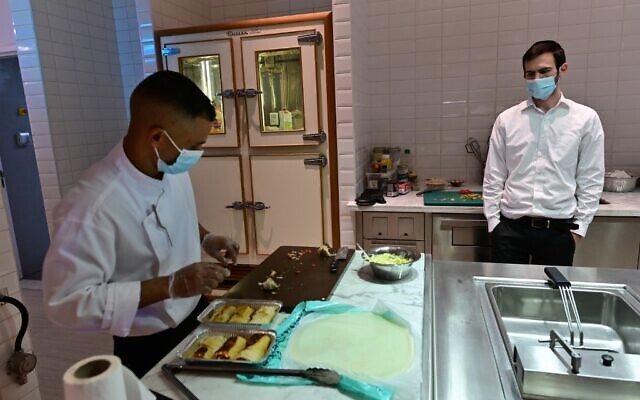 It’s not that the UAE doesn’t have regulations about the proper labeling of imported goods. It does, and they read similarly to the ones the EU published in 2015, which, as Brussels stressed time and again, are merely intended to bolster consumer protection.

“With the exception of meat, fish and fresh produce vegetables and fruits the labelling of the country of origin of a food is voluntary, but if the failure to give such information might mislead the consumer, the labelling becomes mandatory,” it says.

While reiterating their abiding commitment to international law and the Palestinian cause, Israel’s new trading partners in the Gulf apparently don’t think it’s misleading to say goods from the settlements were made in Israel.