The small horse stable in Modiin Illit is nestled against a massive construction project, but its two young ultra-Orthodox owners seemed unperturbed by the encroaching urban sprawl.

Feeding their horses during a recent visit to the site by The Times of Israel, they said they had no idea what was being built around them. Asked whether they were worried the project might crowed out their property, they both smiled and said no.

They were justifiably unfazed, because the adjacent construction is part of a government project on what is considered state land. Their stable sits on private Palestinian land and is therefore, ironically, untouchable by planning authorities.

According to a new report from the Kerem Navot settlement watchdog, the small horse farm in Modiin Illit is one of dozens that have been built on large swaths of private Palestinian land surrounding settlements that have become inaccessible to their original Palestinian owners since the second Intifada. 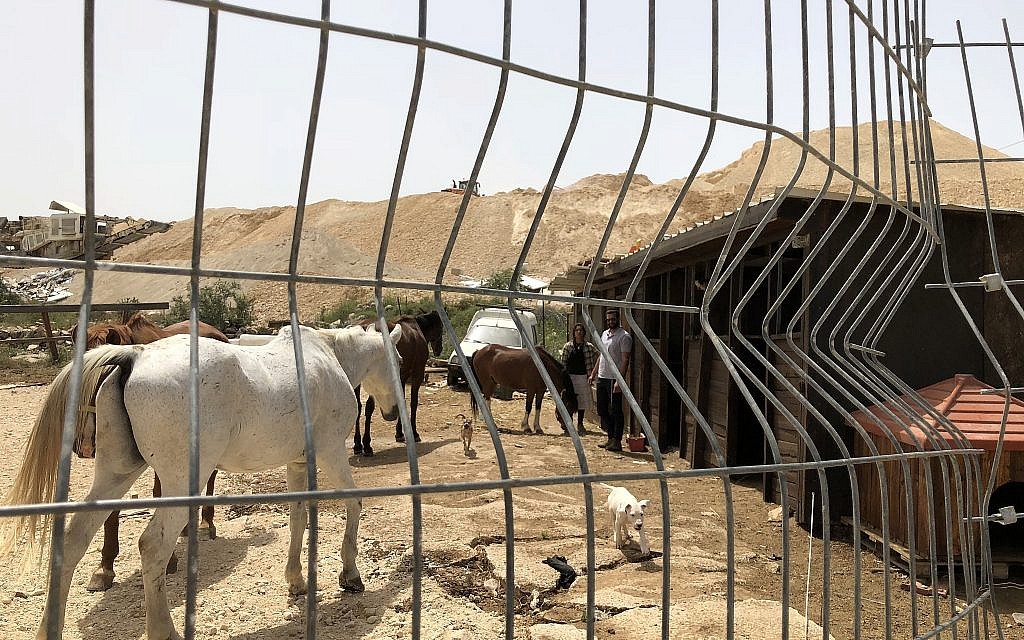 A horse stable located on private Palestinian land in the West Bank settlement of Modiin Illit. (Jacob Magid/Times of Israel)

In theory, Palestinian farmers are still allowed to reach their property in coordination with the IDF, but Kerem Navot says such access is increasingly difficult to obtain and that, in practice, the crops have withered after years of neglect.

While the state cannot approve the construction of Israeli homes on such land, which is still technically under Palestinian ownership, Kerem Navot says that settlers have found other ways to exploit the seemingly abandoned fields to their benefit.

The newly acquired lands on the outskirts of settlements have proven to be prime real estate for horse farmers looking for a place far enough from their communities to graze their animals without the smell disturbing neighbors.

Moreover, many of these farms are being bankrolled indirectly by the state through healthcare providers that subsidize some of the services they provide.

In its report, the settlement watchdog documents 11 professional horse farms and 19 smaller stables that were built on private Palestinian land over the past 15 years — each of them on land beyond the reach of their original farmers, which aerial photos show had been working the fields for decades.

In the settlements of Shaarei Tikva, Modiin Illit, Oranit and Shavei Shomron, Kerem Navot documented how the stables were built on land cutoff to Palestinians due to closed military zone orders issued by the IDF. While these directives were implemented ostensibly for security reasons, the left-wing NGO argued that Israelis settlers exploited those orders for their own personal gain.

The Civil Administration, the Defense Ministry body responsible for authorizing construction in the West Bank, has issued at least 44 demolition orders against these structures, but priorities appear to be focused elsewhere.

One farmer, who asked to be identified only by his first name, Oz, said the Civil Administration has never given him problems regarding the illegality of his facility in the Oranit settlement. “It’s just a shed,” he said. “And because it’s on Palestinian land, which they have been banned from reaching, there’s no point in destroying it.” 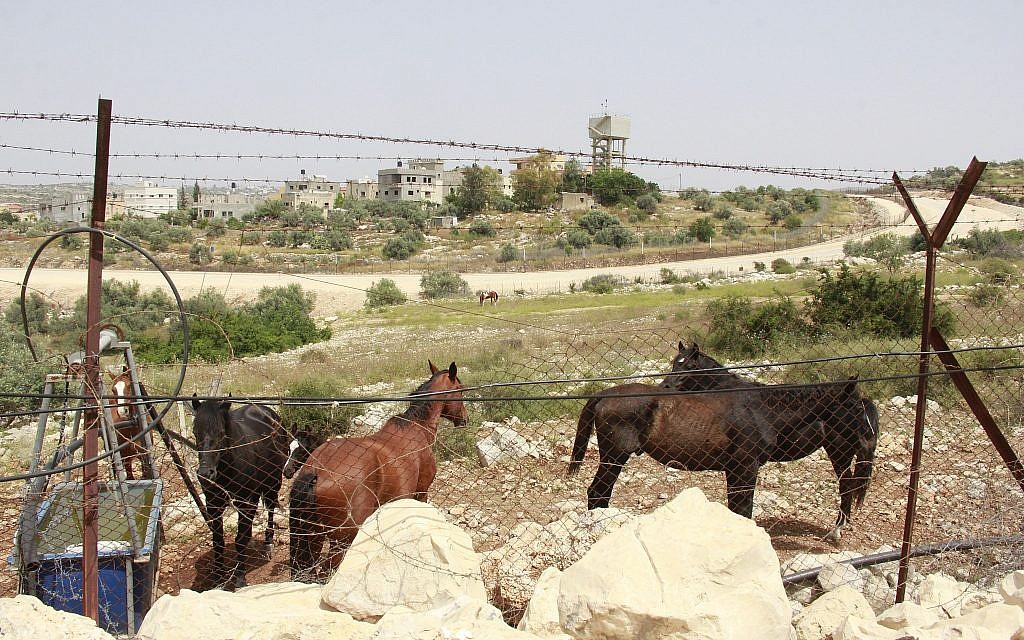 A horse stable located on private Palestinian land in the West Bank settlement of Shaarei Tikva beyond the reach of farmers from the village Saniria, who worked the field for decades. (Jacob Magid/Times of Israel)

“The animals don’t bother anyone and the neighbors enjoy the farm. Property value has even gone up in the surrounding area,” Oz added.

A more acute example of the exploitation of the territory declared by the IDF to be “a closed military zone” for security purposes was uncovered last year by Kerem Navot in neighboring Shaarei Tikva.

The settlement northeast of Rosh Ha’ayin is doubly surrounded by its own fence and by the security barrier that snakes around Israeli communities straddling the Green Line.

There, too, Palestinian land was confiscated via military orders in 2001, 2003 and 2004 for the construction of the fence, with the original landowners pledged periodic access to their property via IDF permits.

Aerial photos using Civil Administration GIS layers show the horse stable in the Givat Harel outpost near Shiloh (yellow box) sitting outside of what is considered state land. The blue dots mark the buildings that have Civil Administration demolition orders filed against them. (Courtesy: Kerem Navot)

In 2005, Shaarei Tikva’s security coordinator took advantage of the largely unmanned narrow zone between the two fences and established a small horse stable among the Palestinian olive trees.

While legal pressures forced the security coordinator to evacuate the stable several years later, he reestablished it in 2015 less than a mile from the original location.

Cameras placed by Kerem Navot captured the Shaarei Tikva resident using his keys to a gate in the settlement’s fence to access the stable each day.

In its report, the watchdog argues that understanding how this relatively recent phenomenon developed requires an investigation into the horse farms’ financial backers.

All four of Israel’s healthcare providers (Clalit, Maccabi, Meuhedet and Leumit) have inked agreements with horse estates in the West Bank in which they subsidize therapeutic riding lessons.

While it began as a treatment for children with special needs, therapeutic riding has become increasingly popular among young Israelis, who utilize the exercise to relax and develop muscle tone, coordination and confidence. 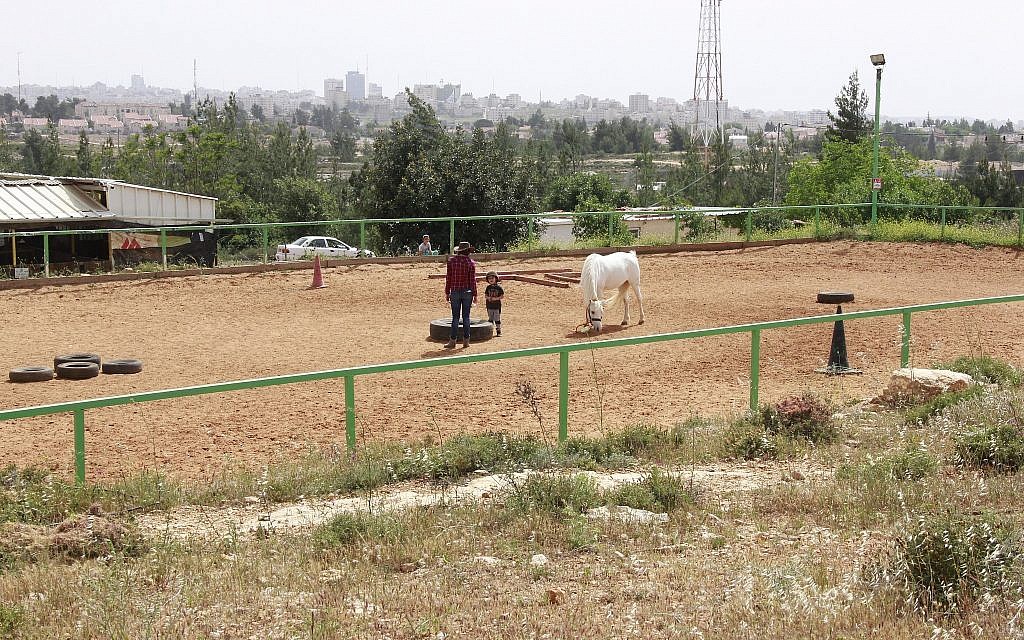 A horse stable located on private Palestinian land in the West Bank settlement of Beit El. (Jacob Magid/Times of Israel)

Israeli healthcare providers offer subsidies to therapeutic riders at seven stables in the West Bank that sit on private Palestinian land: in the settlements of Beit El, Mevo Horon, Beit Hagai and Beit Yatir as well as in the illegal outposts of Sde Bar and Ma’ale Yisrael.

The providers were uninterested in the status of the land on which their partner stables were built. Spokespeople for all four companies said that issues such as land status are political matters of no concern to them.

A spokeswoman for Clalit said her organization provides services to all Israelis, regardless of where they are living. She explained that the provider sends clients to the most convenient and suitable locations, adding that “there is no reason that someone should have to travel 30 minutes from their home for the service when a perfectly suitable location sits next door.” 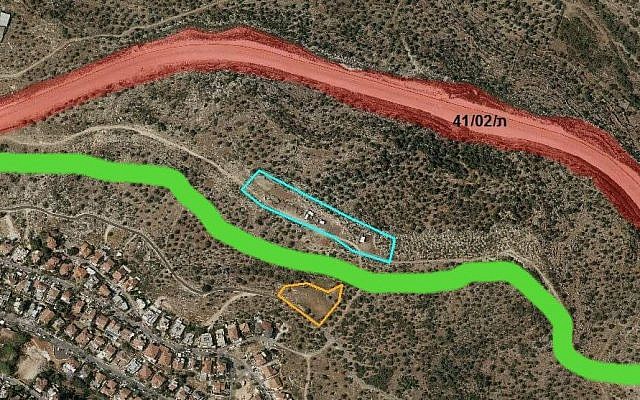 Kerem Navot’s Dror Etkes argued that the state, which funds all four healthcare providers, is “encouraging a violent violation of the law.” He added that the establishment of these horse stables has been just one of the methods used settlers to “swipe as much land as possible” over the past several decades.

Asked for comment regarding its failure to implement demolition orders against various horse farms throughout the West Bank, a spokeswoman for the Civil Administration said that each case was unique and that more time was needed to gather the information explaining the inaction.